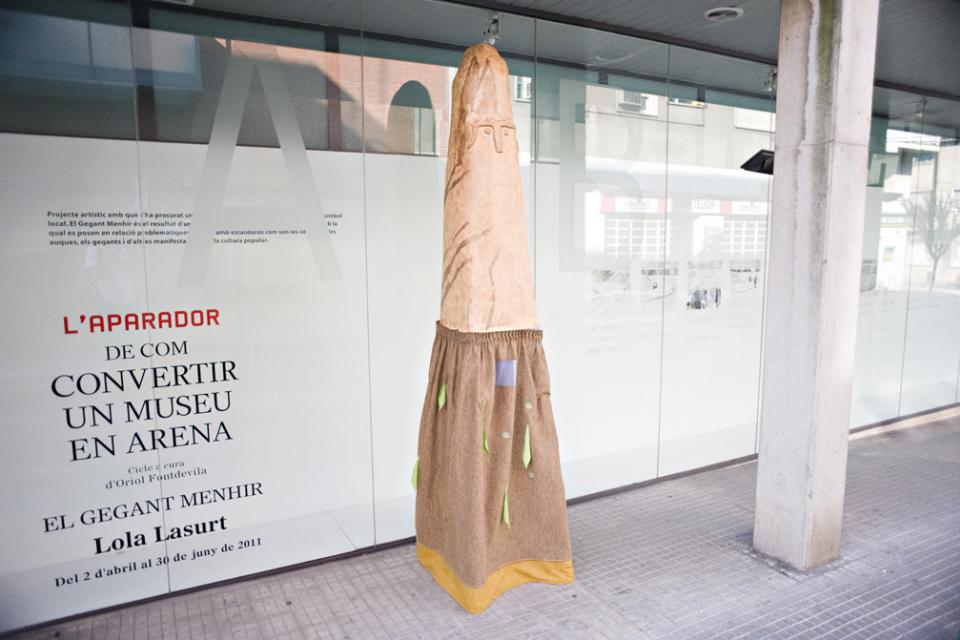 Menhir Giant. Lola Lasurt (2011)
Menhir Giant (Gegant Menhir) reviews aspects of the popular tradition of giant building in relation with an event in 2010 that triggered significant repercussions in the media as well as fervour among the people of Mollet del Vallès: the discovery of the so-called Mollet Menhir (Menhir Mollet) , which is anthropomorphic in nature and dates from the late Neolithic. The menhir was found eleven metres below the ground during the construction of a pay car park on public land in the town centre.
The project investigates the creation of a collective symbol involving a complex process of negotiation between popular and institutional initiatives. This sparked debate at Mollet’s only self-managed association regarding how and why the Menhir Giant should be built, also giving rise to a workshop for its manual construction at a municipally-owned civic centre.

Exhibition of Audiovisual Productions of Sant Andreu. 2006-2016.
This initiative emerged from work by the Sant Andreu District and Resources Centre, with the collaboration of Teleduca and has been continuously implemented jointly by both institutions over the last 10 years. Its aim is for local schools to work on a creative task, with older pupils playing a central role, consisting of the creation of a short film.
The initiative is based on collaboration and direct work with pupils. The last 10 years have been spent preparing scripts, making films and holding meetings, with hours of joint work and also with teachers and students, supported by the Teleduca team, creating a climate of mutual respect and trust among everyone. They have also been 10 years of everyone enjoying the productions put on at a festival featuring the boys and girls of Sant Andreu.