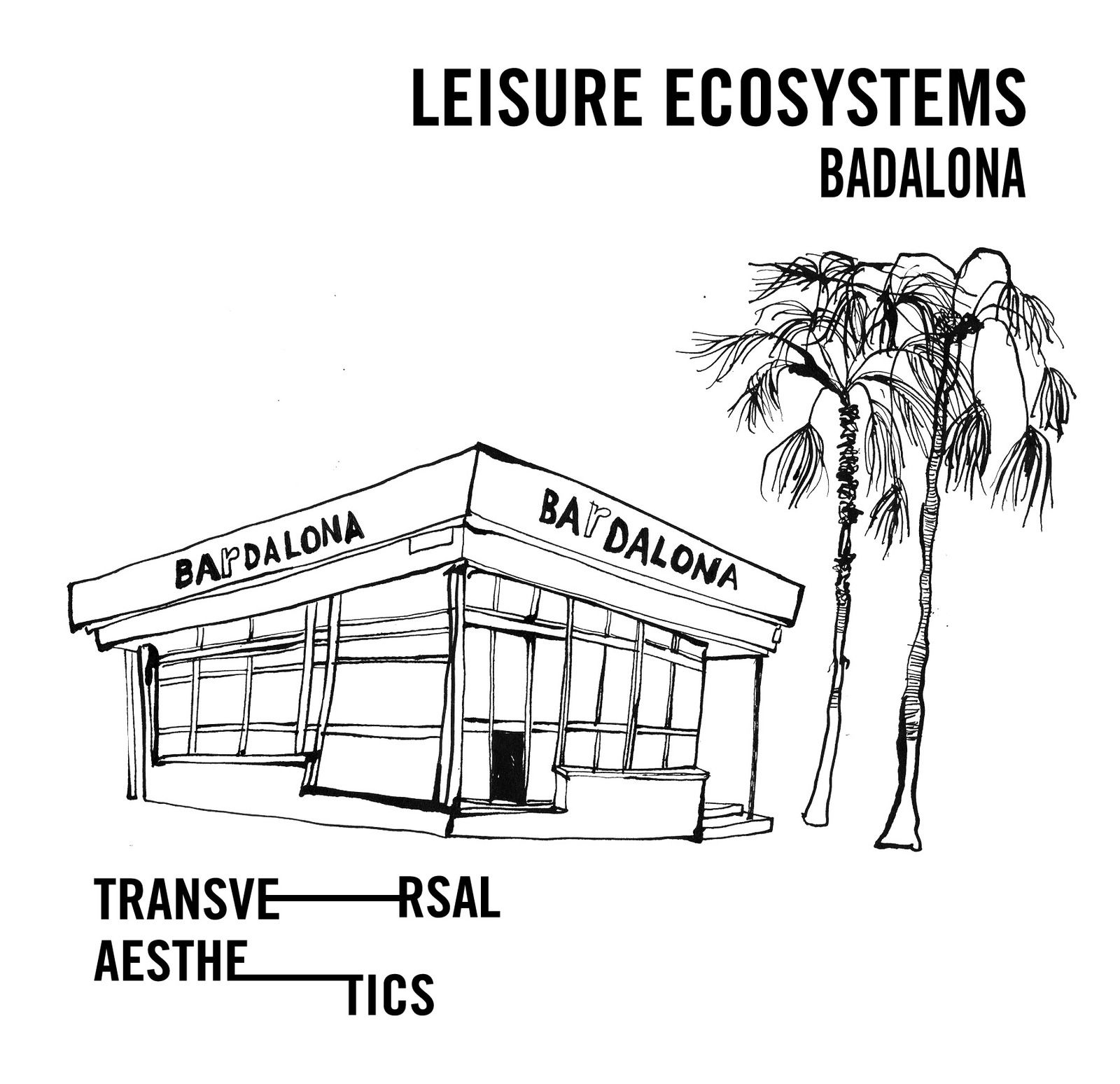 TRANSVERSAL AESTHETICS is an art project carried out in areas which are generators of physical and social spaces on the frontier between the rural and the natural environments, and urban space. The projects developed combine creative practices and educational actions, in collaboration, or in interaction, with local agents and organisations.

LEISURE ECOSYSTEMS is the common strand for the various locations involved in this edition (2018-2019). In addition to Badalona, TRANSVERSAL AESTHETICS will happen in Valencia, Castellón, Alicante (Comunidad Valenciana) and Huarte, Villava, Burlada (Navarra).

TA / LE Badalona focuses on the transformation of an industrial estate into an area of leisure activities, known as Polígon Industrial Manresà (Manresà Industrial Estate), a zone of Badalona located between the sea and the C31 motorway. The name derives from an old 18th century farmhouse located in the upper part of the neighbourhood, the owners came from the city of Manresa. In the 1970s, while other neighbourhoods in Badalona overcrowded, the Manresà district suffered a gradual abandonment, establishing itself as an industrial area. The City Council of Badalona extended in 2013 the uses of the industrial estate, so that in the streets closest to the residential areas, the opening of shops or recreational areas would be allowed, promoting a gradual transformation of the polygon from industrial use to recreational uses and services. This measure sought to revitalise the estate, which at that time of crisis had more than 50% of its industrial units empty. Progressively, many of the units have been reconfigured as sports or leisure activity spaces (climbing, paddle tennis, trampolines, gymnasia, and so on) as well as dance rooms and discos, sharing the district with industrial spaces and warehouses.

The proximity of this area to the beach makes it possible to concentrate a large number of activities related to the leisure industry, which have a special impact during summer vacations. This is not an isolated process. It is reproduced in various industrial estates throughout the country, clearly activated after the crisis of 2010, and as a result of the ongoing conversions in models of productive work. Areas destined for the production of goods and industries in the second half of the 20th century, such as urban peripheral industrial estates, may be considered as spaces for the production of leisure and free time, adapting their uses to one of the major industries in the present, modifying the nature of our relationship to the countryside environment, as well as the imaginary of compartmentalised and concentrated leisure activities in certain temporary and urban spaces.

neg-OCI SL, specialists in industrial estates and brandings, is the artistic project of Clara Nubiola, as a reflection upon the implementation of new activities in industrial estates, starting with businesses arising from the privatisation of leisure, and a set of actions derived from this observation. She works in collaboration with the Escola d'Art i Superior de Disseny Pau Gargallo, and through the participation of students in the Projects IV and Documentary classes, with lecturers Julia Cuyàs and Abel del Castillo.

The conception and creation of a fictitious company neg-OCI S.L., allows for an imaginative approach to the subject, within the framework of urban criticism, combining conceptualisation with activity. Clara Nubiola’s plan is to map the location so that the Manresà Industrial Estate’s past, present and possible future will be handled using a subjective and ironic format which permits the formulation of questions regarding the uses of, and future possibilities for these industrial spaces.

What is the estate’s historical past? What are its relationships with the surrounding urban areas? Who are its inhabitants? (PAST)
What industrial uses and companies remain in the estate? What new leisure-related activities have been established (children’s indoor advanture parks, crossfit, climbing centre, disco, etc.)? which spaces are for sale, for rent or just abandoned? (PRESENT)
What futures are possible? (FUTURE).

The student group from the Escola d'Art i Superior de Disseny Pau Gargallo, based on Clara Nubiola’s approach and the tutoring of Julia Cuyàs and Abel del Castillo, works collectively to create a videographic document on the past context and present. At the same time, and based on appropriationism as a creative practice, they mount an aggressive campaign of branding and direct marketing, to influence the future. This campaign is based on posters and advertisements for possible businesses to be implemented in the Manresa Industrial Estate, in order to turn it into the nerve-centre of the most absurd leisure.

In turn, Clara Nubiola gives shape to the project as a whole with the creation of a display-stand, in which the fake company neg-OCI S.L. is presented as a leader in counselling for the implementation of new leisure-related activities, as well as a leader in the design of the necessary branding to be a model of success in the new businesses associated with the transformation of industrial estates. The creation of this exhibition stand, in which the fictitious company offers its services to "future clients", is the pretext for the creation of a cartographic framework from which to address the various questions posed. 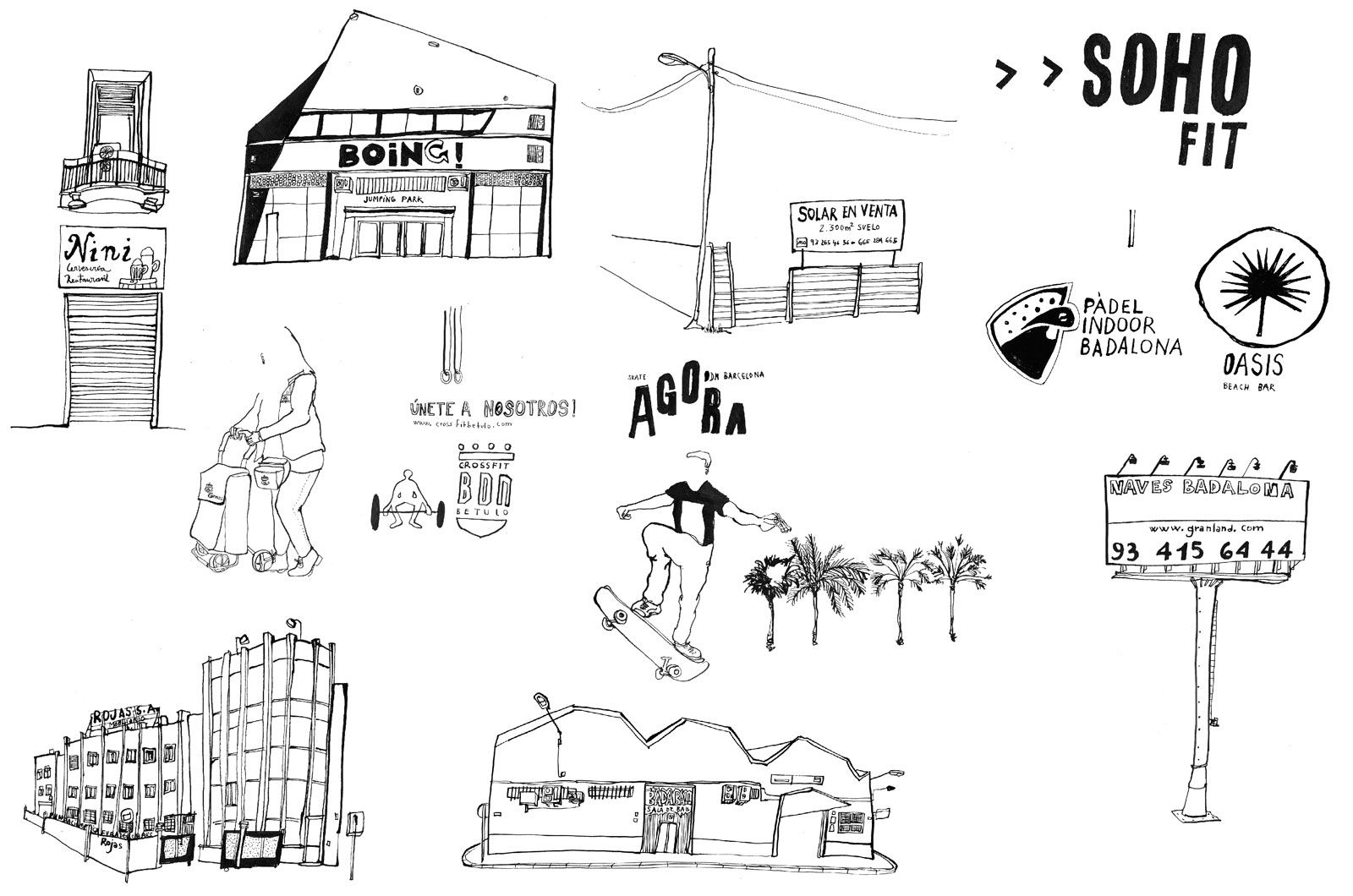 The educational activities are carried out at the Escola Superior d'Art i Disseny Pau Gargallo de Badalona, a public centre of artistic education from the Generalitat of Catalonia, integrated into the ESDAP-Escola Superior de Disseny i Arts Plàstiques de Catalunya-(School Superior of Design and Visual Arts of Catalonia).

28/3/19 Conference-debate with Mariona Moncunill and Clara Nubiola. Moncunill presents Leisure at the Factory, a project carried out in the previous edition of Estétiques Transversals. The Leisure at the Factory project is a study of spaces in transformation from the Pla d'en Boet estate, a work-space now converted into mixed work and leisure spaces. Clara Nubiola presents previous projects, the current project at Badalona, as well as the working dynamic which she proposes in collaboration with the students at the school.

29/3/19 Guided tour by Carla Nubiola, using the urban dérive as a creative methodology. Two guests will bring their contributions on the tour. Pedro Jesús Fernández of the Canyador Neighbourhood Association will help in establishing context, and in distributing a closer knowledge of local residents’ vision of the estate. A guided visit will be made to the space belonging to La Fundació Èpica i Singular, from La Fura dels Baus, in a warehouse on the estate. This is an example of a space which previously manufactured furniture, and which is now dedicated to training activity and the presentation of shows which the foundation promotes.

014/06/2019 On-site installation of the stand designed by Clara Nubiola, introducing the fake-company neg-OCIO S.L. The stand integrates the design and video work done by students from EASD Pau Gargallo. 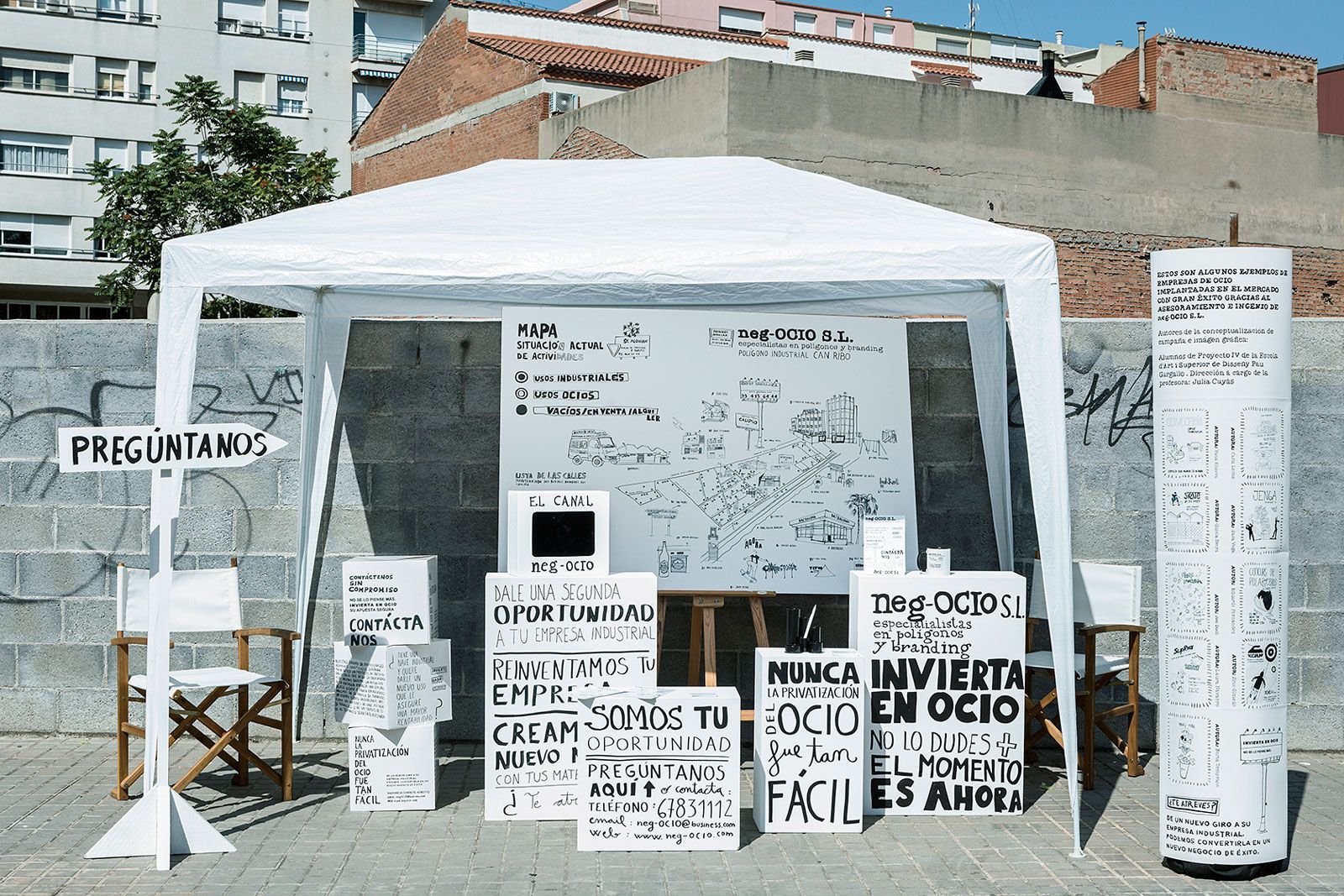 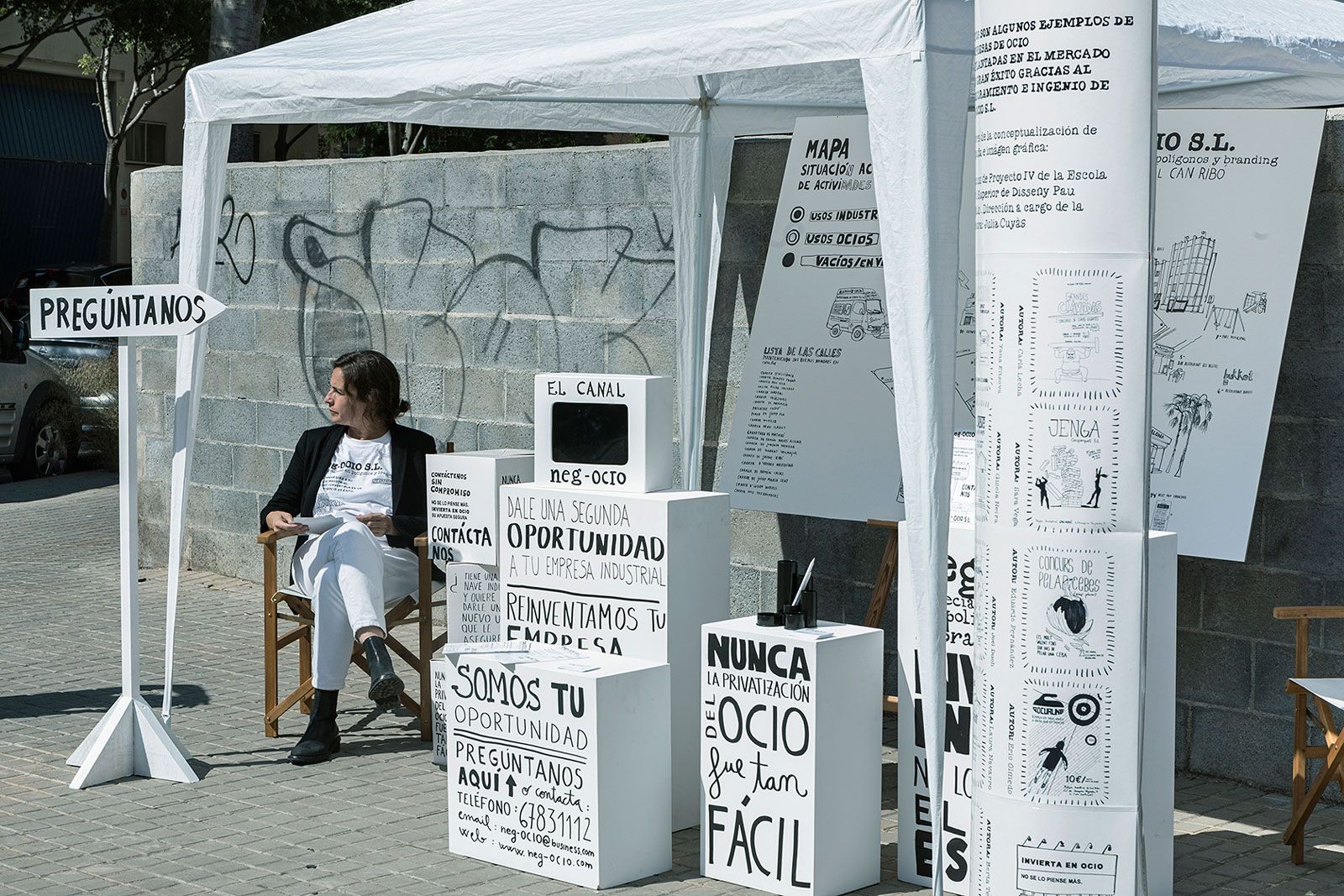 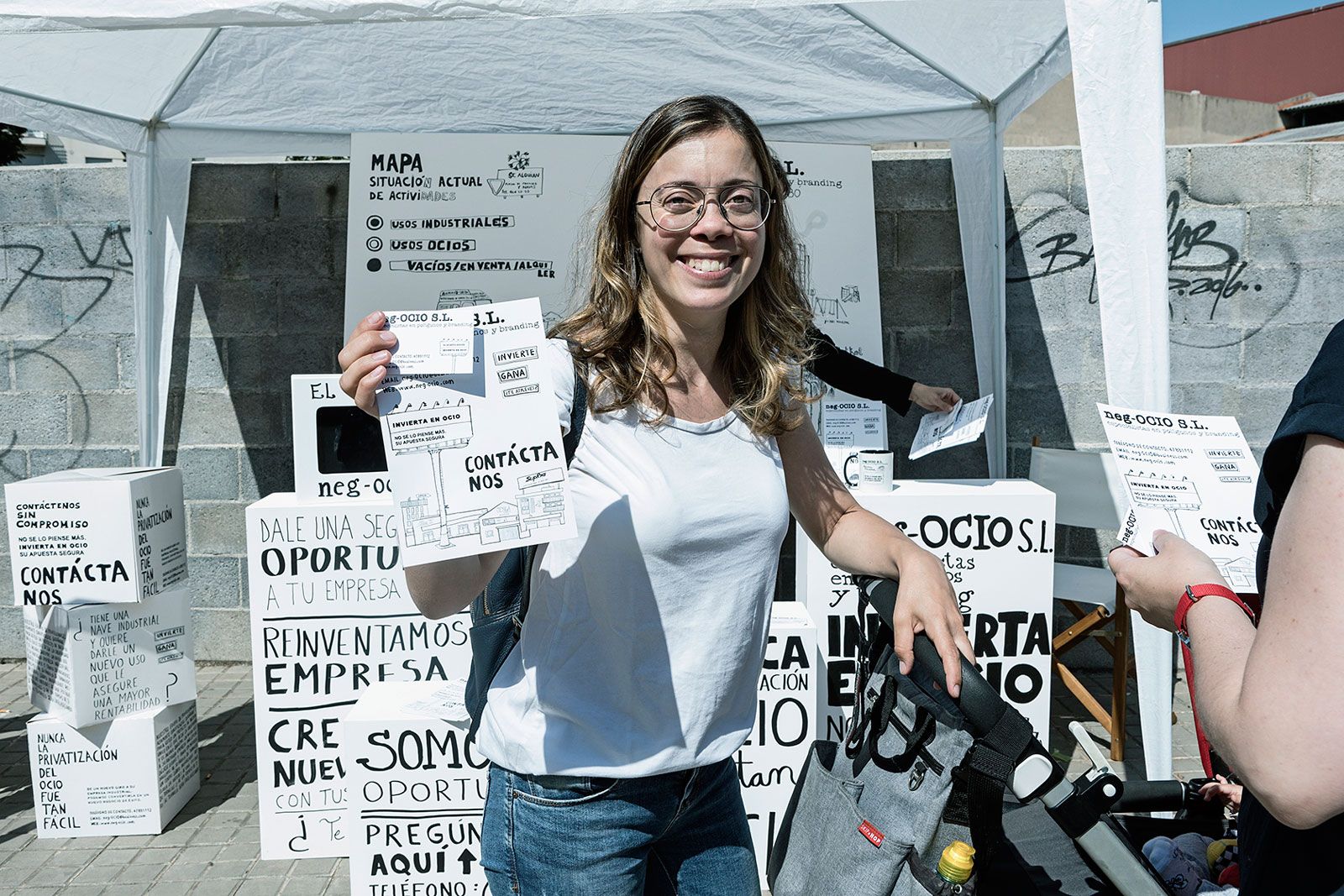 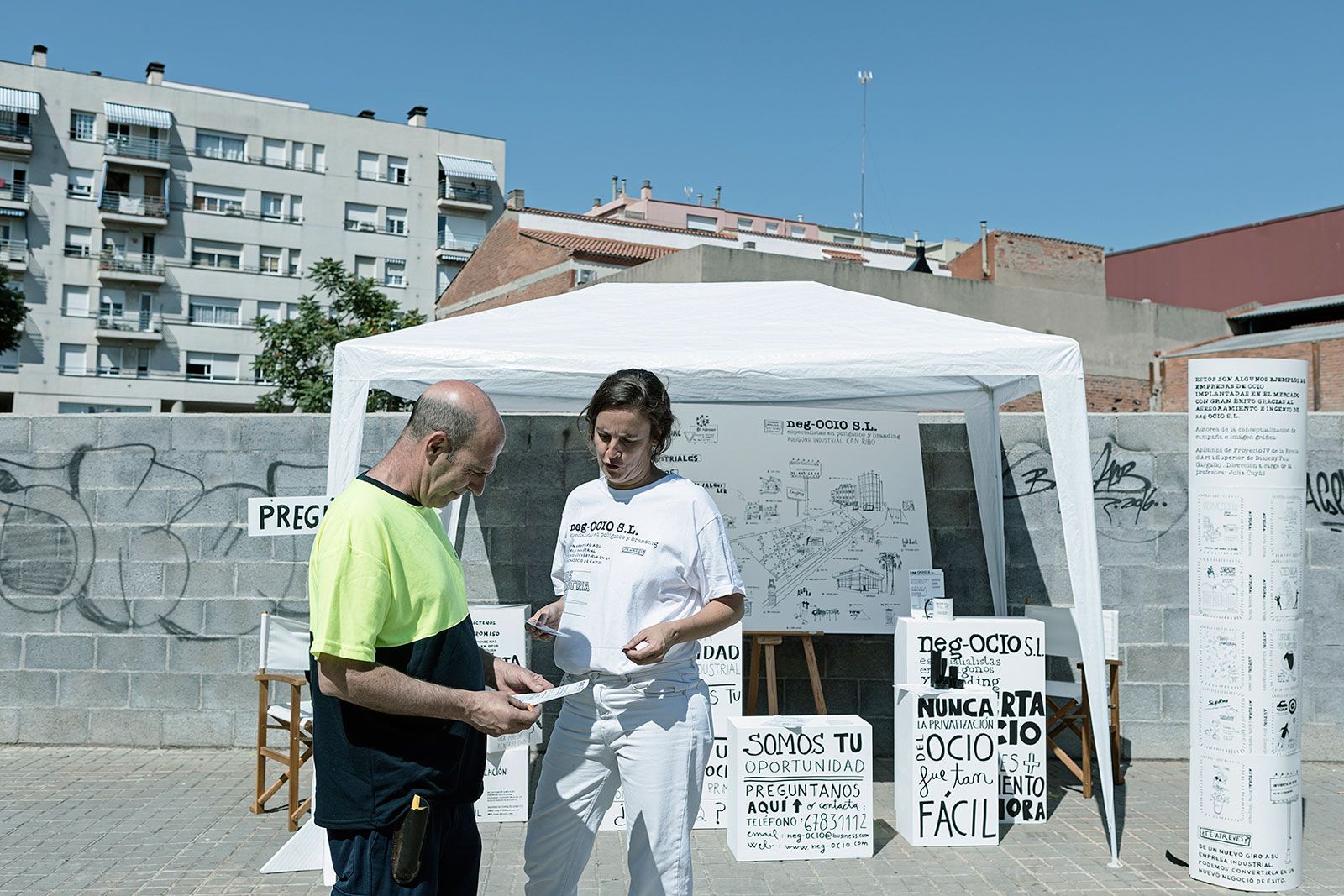 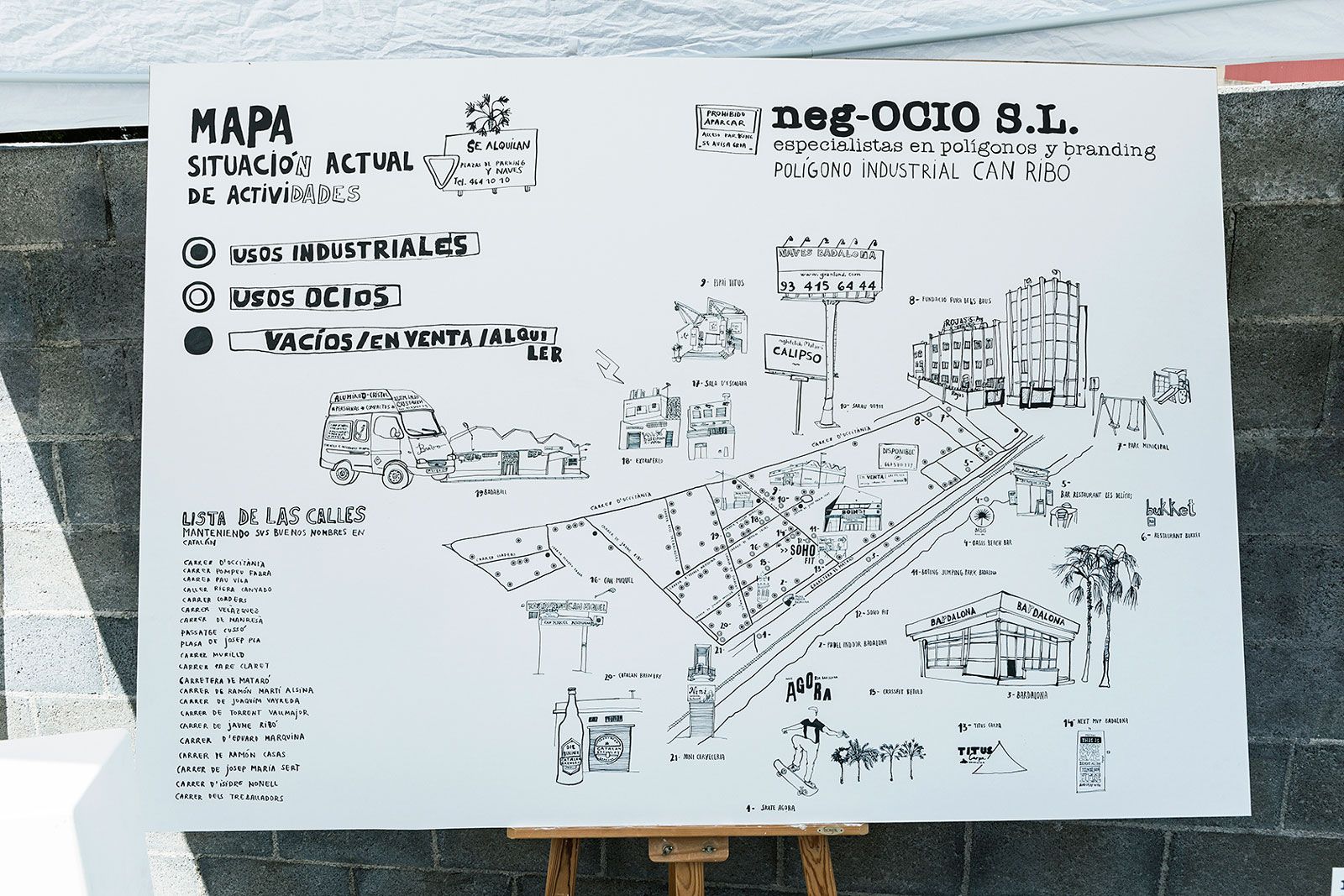 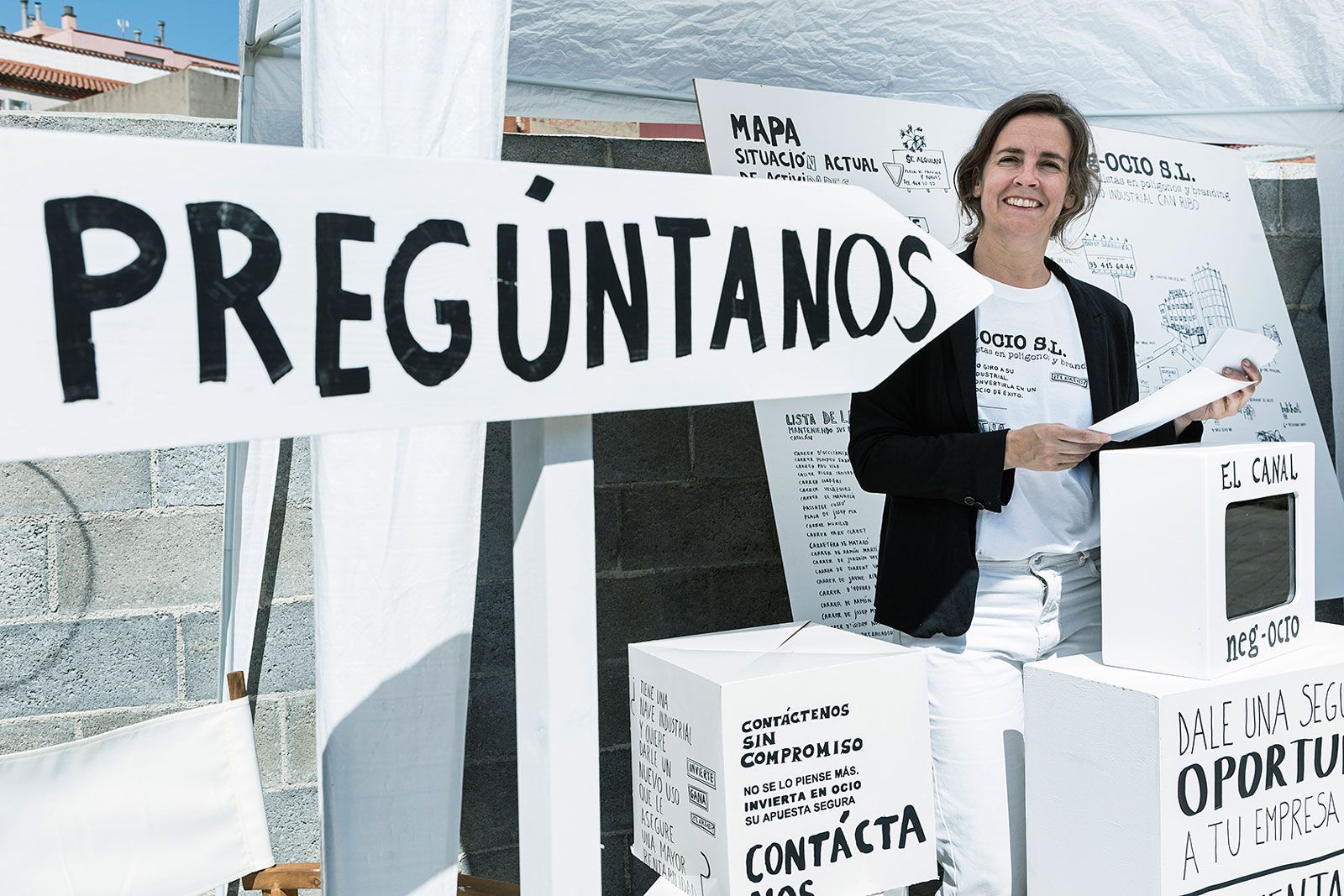 Transversal Aesthetics is a platform for experimentation and confluence between artistic practices as a space for critical research; educational activities as a space for the production of content, interaction and the transfer of learning; and the urban context as a space of connection between specific themes of work and a specific active social space surrounding it. The project is based upon the cross-disciplinary dimension of art, in order to connect experiences to activities which impact upon singular elements, based upon common themes and strategies, shared among various participating agents and bodies. A platform in medium-sized urban spaces, as generators of social, cultural and environmental spaces at the boundaries between rural and urban.

The project aims to study Leisure as a driver and generator of specific themes in the regions chosen, based on the concept of leisure as a generator of activities, landscapes, aesthetics and relational spaces. Leisure and its social role form part of a highly integrated and deeply-rooted system of geography, economics and everyday life within these regions, configuring spaces in which usage based upon leisure and free-time activities is increasing. These leisure-related settings create models of landscape, of social relationship and of connection with or rejection of their surroundings, from which arise their own aesthetics, modifying the uses and dynamics which are configured around them.

Leisure activity arises from the transformation of systems of production and processes of work, and generates energetic forms of consumption in which to invest free time. All this is enhanced by direct connections to other contemporary issues, such as the tourist industry, or the emergence of spaces which promote non-sustainable leisure. But leisure may also enhance relationships with the natural environment, by using a space that generates social bonds, or which is a source of collective creation. As much in one case as in the other, leisure contributes permanently to the transformation of urban spaces.
The new visions proposed around this ecosystem will be promoted on the basis of artistic practices, in association with social organisations and spaces for educational action.

ET has, as its general goals, the realisation of specific artistic projects, the active involvement of social and cultural agents in the context of work, the encouragement of enthusiasm within the framework of processes of teaching and learning, and the visibility of existing social creativity.
However, work is being done to influence the collective construction of public and social space through processes, actions and projects which promote the involvement of people from various fields within cultural production.
With Transversal Aesthetics, artistic practices and social contexts interact in a non-habitual context, establishing links between cultural institutions and other institutional or self-managed fields.
Thanks to this interaction, the creation of artistic projects which focus upon site-specific themes shared between different municipalities and geographies is encouraged.
CREATORS - LOCAL NODES - DEVICES The works carried out within the framework of ET are defined using these three common strands, which may cross over, which may come together as one, or which may coexist in parallel.