Into the River is a video-performance session that brings together three works developed within the framework of Transversal Esthetics, a platform for experimenting on the intersection between art, mediation and social space, activated by Idensitat in collaboration with art centres in Valencia, Alicante and Castelló, in collaboration with the Consorci de Museus de la Comunitat Valenciana, and in Huarte, Burlada and Villaba with the Centro de Arte Contemporáneo de Huarte.

The session is framed within the Loop Festival, a platform dedicated to the study and promotion of the moving image, in two different screenings, one in November 2021 and other in January 2022.
http://loop-barcelona.com/about-loop-festival/ 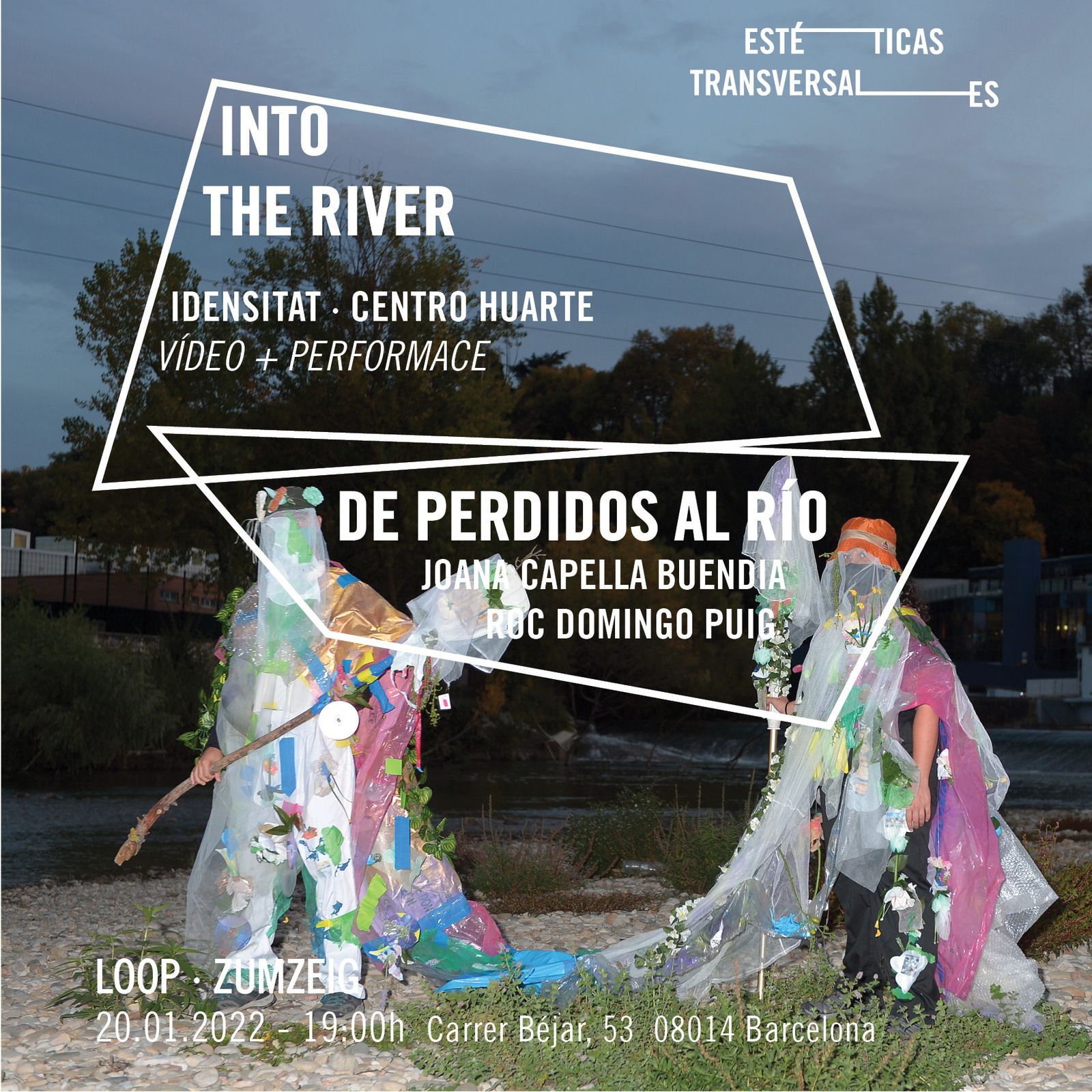 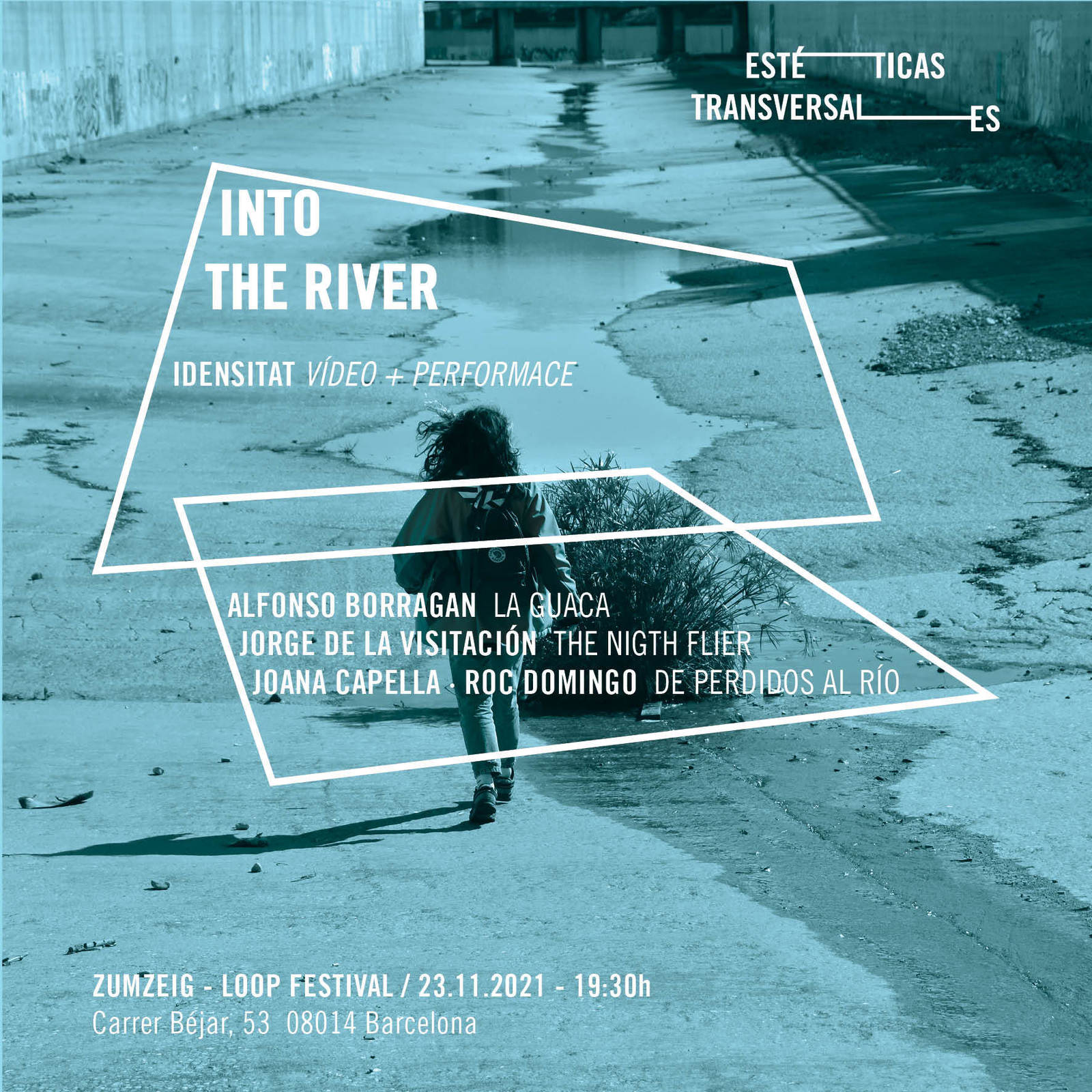 This latest 2021 edition, Ecosystems of Fiction, both in Navarra and in the Valencian Community, has explored the conceptual premise of Fiction, using a setting common to all the participating locations: rivers.

In each of these contexts, artists, local participants, and a number of educational organisations have enacted various processes centred upon the tensions, paradoxes or connections that exist between imagined realities and fictions, based upon a view of the river environment and its multiple components and perspectives (natural, social, landscape , political, etc.) as elements that outline and blur the boundaries between rural and urban.

The waters of the Arga river in Navarra, or their absence, as well as the waters in the riverbeds of the Riu Sec (Dry River) in Castelló, the river Túria in València, and the river Monnegre in Alicante, together create dialogues and deploy various imaginary or fictional visions connected to those locations in which the project was developed.

Three audiovisual pieces will be screened in this session. Three experimental audiovisual productions in dialogue with these rivers, resulting from the artistic residencies carried out within the framework of Transversal Aesthetics - Ecosystems of Fiction between 2019 and 2021. “The Night Flier” by Jorge Núñez de la Visitación, realised in Alicante during the residence at the Las Cigarreras Cultural Centre, “De Perdidos al Río” by Joana Capella and Roc Domingo, and “La Guaca o Tesoro” by Alfonso Borragan, both pieces realised in Huarte, with the Centro de Arte Contemporáneo de Huarte . De perdidos al rio is a project resulting from a residence aimed at examining the dialogue between reality and fiction, as applied to the context of the Arga River as it passes through the towns of Burlada, Villava and Huarte.

In this project, the artists experiment with the intersection between the imaginary linked to memory and the identity attached to the river, and the construction of a new mutant imaginary elaborated from fiction. The project’s formalisation was adapted to the new circumstances that arose from the pandemic, converting it into a particular aesthetic experience without an audience, a strange solitary pilgrimage of two beings emerging from the Anthropocene, who on their journey connect the Huarte Art centre with the Góngora waste treatment plant, following the course of the Arga river, passing through Burlada and Villava.

The action becomes a long audiovisual piece that is broadcast live. The performance-film is a sequence shot that captures the entire journey, from the beginning of the project, its production process and the pilgrimage itself as executed by the artists. The use of live shuffle, the multiscreen and sequence shots, serve to question the narrative linearity of the events, creating a tension between directionality and transition, attempting to deploy or disclose those mechanisms that construct these ideas. The piece is accompanied by a text, which turns into a voice-over that appears while the images are being shown.

Joana Capella Buendia, is a graduate in design, specialising in multidisciplinary management, from the ESDi (Universitat Ramon Llull), and also in the master’s degree course in research and experimentation in design from Bau (Barcelona). Part of her work has been exhibited at the Casa Tres Patios (Medellín), La Escocesa, Sala d’Art Jove, Utopia 126, Escola Massana (Barcelona); and she has also taken part in several conferences, and has contributed to a number of publications, such as “Quadern de les idees les arts i les lletres" (Sabadell); Art & Speculative Futures (CCCB, Barcelona); Interface Politics Congress (Hangar, Barcelona; Diseño y cultura Digital (Medialab Prado, Madrid). Her artistic practice, as well as her many collaborations, move between research, curation and production. Her projects revolve around the conditions which the production of art and knowledge make possible, as well as the relationship between the artist and the idea of the profession and work.

Roc Domingo Puig has a superior degree in Design and Illustration from EAM (Lleida), and is a graduate in Fine Arts from the Universidad de Barcelona. Currently he is artist in residence at EART (Barcelona), and is a member of the KGG collective. Some of his works have been exhibited at the Casa Tres Patios (Medellín), Casa 916 (Concepción), Casa Aparte (Cuenca), ICPNA (Iquitos), La Escocesa, Àngels Barcelona, La Usurpada (Barcelona), CAC Bòlit (Girona), and he has published an article in the latest edition of the magazine Arts (Lleida). His artistic production fluctuates between visual production, curation and education. His latest projects examine traditions, habits and customs connected to particular localities, as well as the material conditions which gave rise to them. 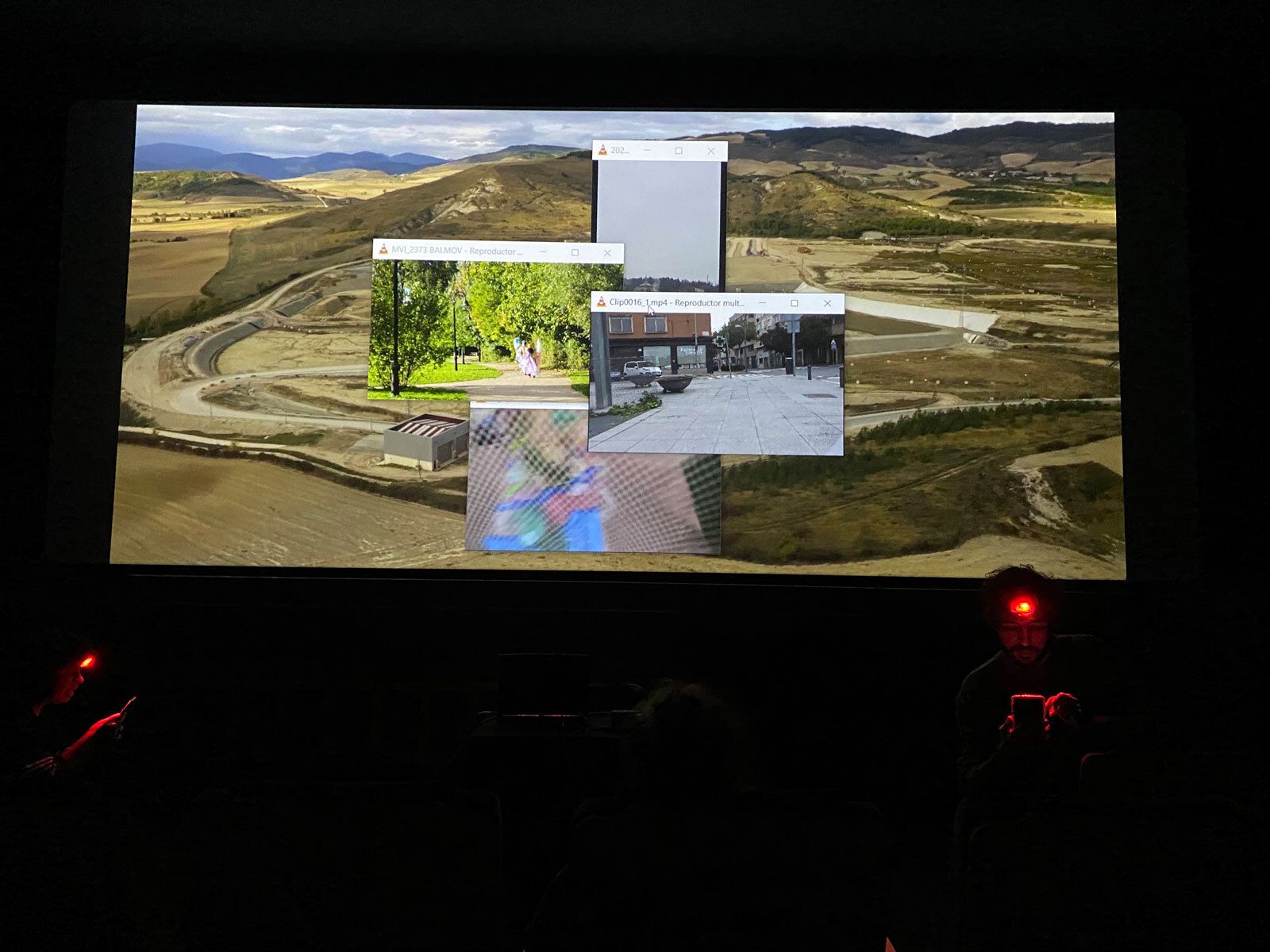 La Guaca is a video essay made in collaboration with Patxi Alda, Ione Atenea and Hasier Larretxea. The piece is a semi-fictionalised narrative which imagines a relationship between the fragments of treasures accumulated in the river and carried by the current, and the seeker who allows herself to be found by them. The treasure is elusive, and, as the treasure hunter herself recounts, the treasure escapes from its seekers. The guaca finds you. The video essay is constructed through reflections that search for these treasures in the water and fragmented images of the reconstruction of photogrammetries of treasures that escape their representation.

La Guaca is part of the long-term No Man’s Land project that uses water and the game as revelatory of the illicit, the means of re-inhabiting a forgotten space free of social norms and possessors. The project, on the one hand, attempts to recover the hidden practices that were carried out in situ and the memories that passed through it; while on the other, it recreates new stories, experiences and myths for future recovery. In this phase, the project explores the magnetism of the destiny and the sweep of the Arga river, and the three towns that follow its course: Huarte, where the Contemporary Art Centre is located, Burlada and Villava (Navarra).

alfonso borragán
alfonso borragán’s artistic practice is a conjunction between research, teaching and production. His work has been described as a vague momentum, the critical moment, in which the generation of images is enhanced. As an artist, he reflects through images that do not exist and latent graphḗ and traces of experience. Through trials of superposition, distortion, concealment or reformulation, he explores images’ eventual limits. As part of his methodology, he activates long periods of research related to the context. He studied Fine Arts at the University of Barcelona, and later continued his training at the MFA Slade School of Fine Arts (London). Alfonso Borragan lives and works in London. He has worked upon and shared his projects in Spain, Portugal, Germany, United Kingdom, Switzerland, Norway, Canada, EE. UU., Colombia and India. His latest works have been exhibited at Emerson Dorsch, Miami (Bucarolito); Fundació Joan Miró, Barcelona (Alterbees); Kontejner, Zagreb (Daguerrolito); Plataforma Bogotá (Fosfofagia 04) o Khoj Artist Association, New Delhi (Fosfofagia 03). 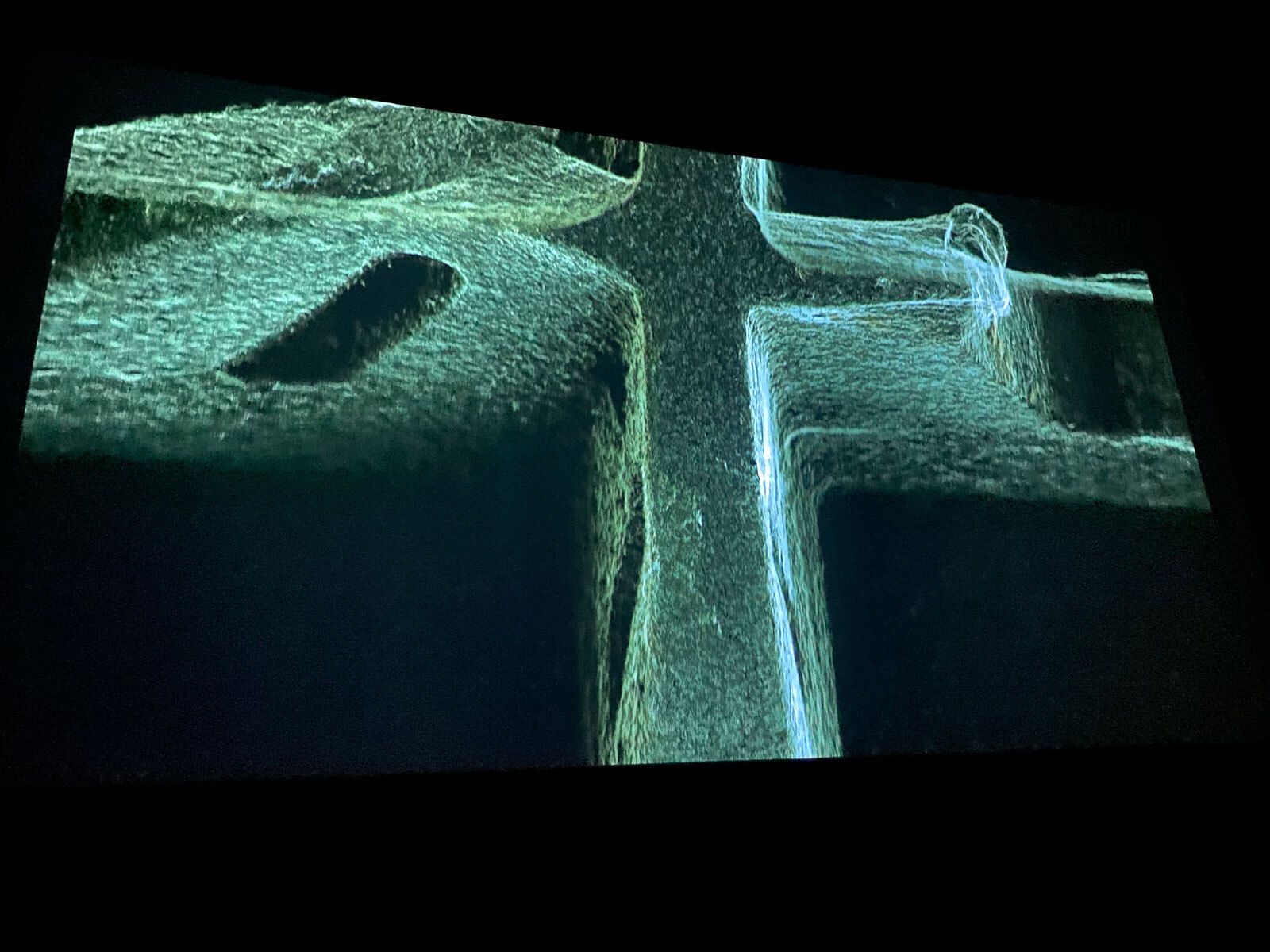 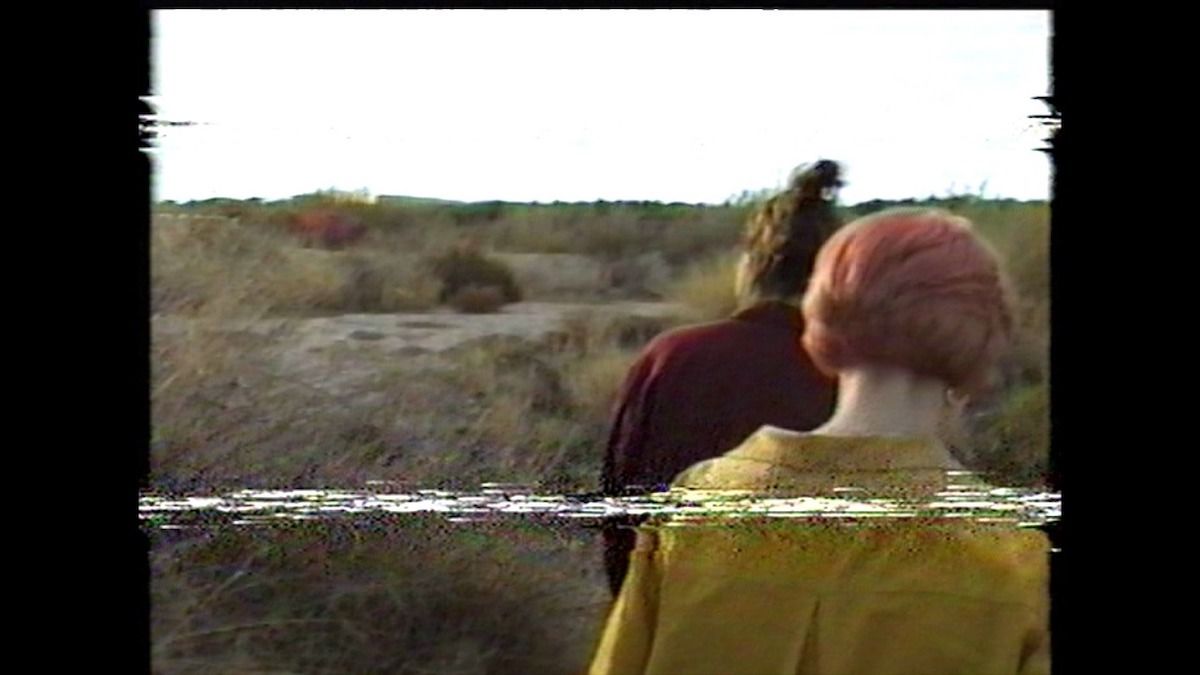 The Night Flier AKA Fleeting AKA Full Exposure is a fragmented fantasy horror movie presented as performative cinema, filmed during Jorge Núñez de la Visitación’s artistic residency at the Las Cigarreras Cultural Centre, using Alicante’s Monnegre River (Riu Sec). The mixture of video, sound and text reassesses the construction of filmic aesthetics in the fantastic cinema genre, linking them to the location, a landscape formed by a discontinuous and weak river course. How may the fear of the unknown be narrated? What happens in the friction between the unexpected and the conventional?

The narrative revolves around Margot. She lives with two scientists in a house next to the beach. Suspecting that they are performing murky experiments in a room in the house, Margot one day takes advantage of the fact that they have left, and while she is snooping around the laboratory, she touches an unknown substance. Afterwards, she begins to feel strange and has a recurring dream; a plane crosses the Mediterranean Sea in the middle of the night, while broadcasting strange signals on the radio. Margot comes into contact with an entity that emerges from the night, The Night Flier.

The film is part of Jorge Núñez's work in residence, in which the artist plays with visual and sonic fragmentation, and lays out his approach to the Río Seco using languages ​​borrowed from experimental and horror cinema.

Jorge de la Visitación, lives in Madrid. He is a filmmaker, illustrator, and musician. He was awarded a doctorate in Fine Arts in 2013 by the UPV-EHU for his doctoral thesis entitled Fricciones, Artificios dramáticos en el Cine contemporáneo. He was a guest lecturer at Máster InCreArte at the UPV-EHU. From 2013 to 2016 he was a co-director of the cultural space Puerta in Bilbao. His films include Marrón de Momia (2012), The Mask of Atlantis (2013), Teenagers 2001 (2015), Alien Witches (2016), the trilogy Night Terrors ( Abduction Scars (2018), Surface (2019) and Temple of Doom (2019)), Fleeting AKA The Night Flier AKA Full Exposure (2020) and the videogame Full Face (2021). He has collaborated in projects with Idensitat, Consorci de Museus CV, CC Las Cigarreras, Eremuak, Halfhouse, Matadero Crea, Tabakalera, Musac, Azala, Storm And Drunk, NauEstruch, Syros International Film Fest and The Guesthouse; and has organised since 2012, the festival for weird cinema Pantalla Fantasma. 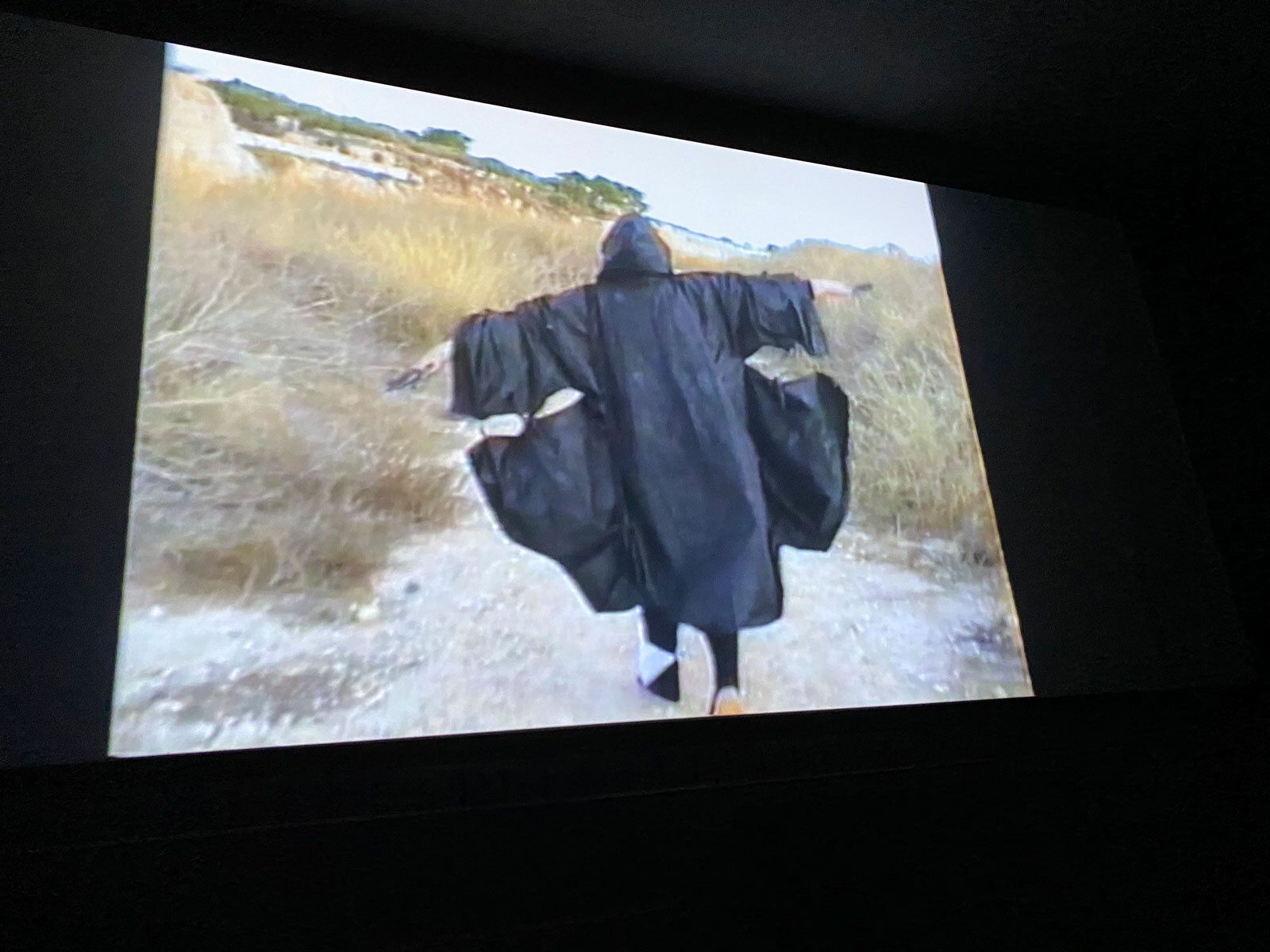