El ponent la mou, el Llevant la Plou is a project by the collective Las Mediocre for the Estètiques Transversals / Immunitat - Comunitat open call. It will be developed at the Las Cigarreras Cultural Centre, with the aim of generating meetings on the subject of the Saladar de Agua Amarga in Alicante.

Also known as the Salinas del Altet, this salt-marsh, located on the outskirts of the city, has traditionally been exploited by the salt reclamation industry. Its cartography contains the remains of office buildings and warehouses from the old salt mine, which still form part of the landscape. It is an ecosystem with a wide biodiversity which has been damaged by past building projects, and which remains unprotected. In this context, a series of meetings will be generated that aim to approach the salt-marsh from various perspectives, in collaboration with local social agents, allowing for different narratives about this location to be collectively constructed. With this project, Las Mediocre attempts to create an intersection between collective artistic practice and the socio-political and environmental issues that permeate the salt-marsh area. The process will include one part which comprises documentary research, and another part which will be more experiential in nature, welcoming a small group of interested participants to carry out activities such as bicycle excursions, walks with researchers or picnics. This will open up room for dialogue and reflection on shared experiences, in which individual participants may share their personal knowledge.

PUBLIC PRESENTATION OF THE PROJECT
Saturday 26th November at 12 p.m. at the Las Cigarreras Cultural Centre in Alicante

Following a number of meetings held throughout October and November, and in collaboration with local social agents, a series of proposals from a variety of perspectives on the saltmarsh environment were gathered together, enabling acollective construction of alternative narratives regarding the locality. The project has sought to create intersections between collective artistic practice and the socio-political and environmental issues which influence the site.
The presentation combines documentary and experiential research, carried out jointly with the steering group, which has also staged excursions, walking tours with researchers, workshops and afternoon snack sessions. The presentation, understood as an art installation which brings together the experience of the artistic residency, opens up a space for dialogue and reflection on the theme of this wetland.
Steering group group formed by: M Reme Silvestre, Paquito Nogales, Magdalena Lorca Mena, Andrea Moreno, Fernando Martínez, Maria Domènech, Natàlia Gomez Mateu, Carlos Pastor Garcia, Juan Manuel López Carreño, Javier Gutiérrez, Roser Colomar or Aruca Sebastián among others . 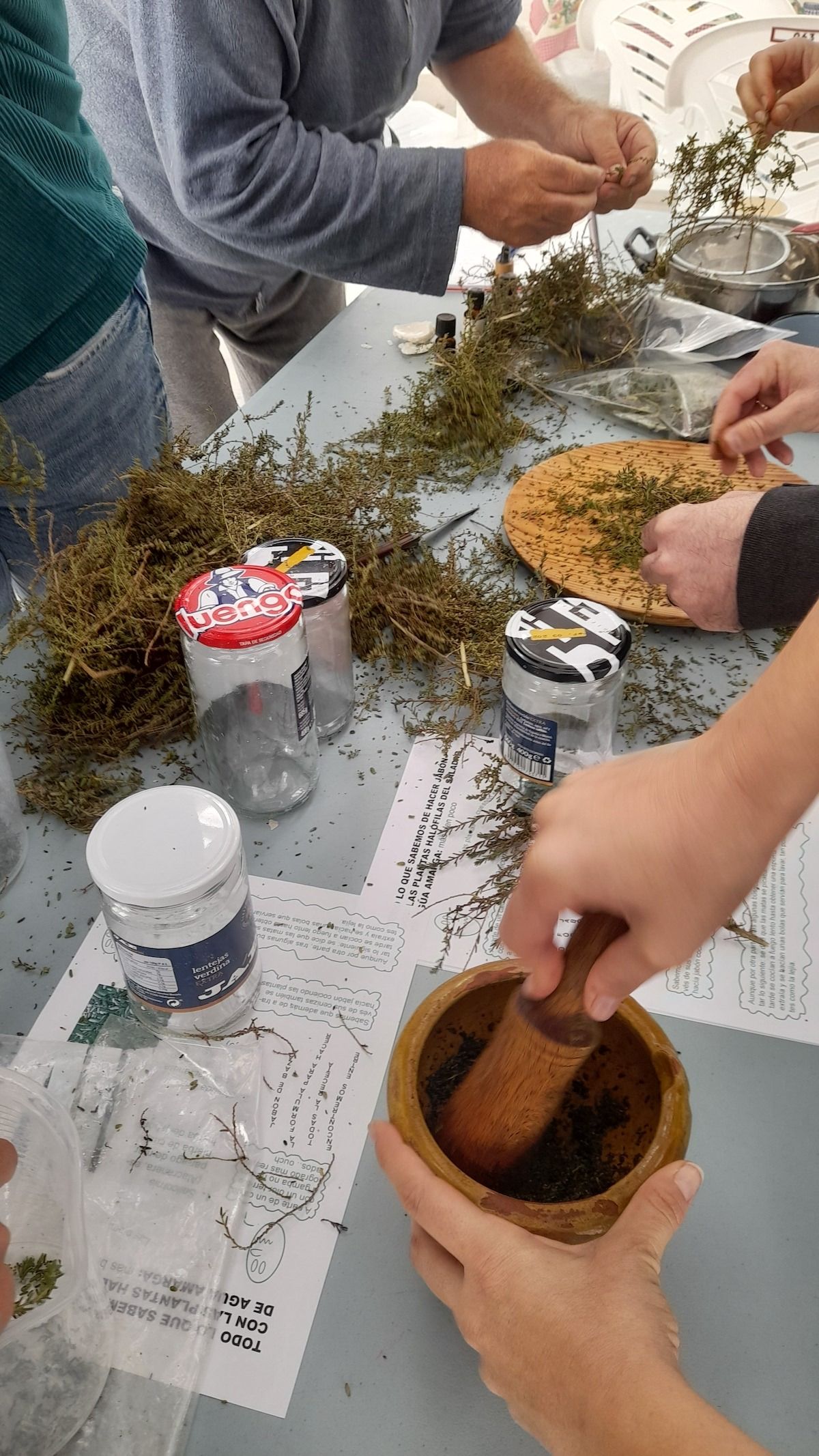 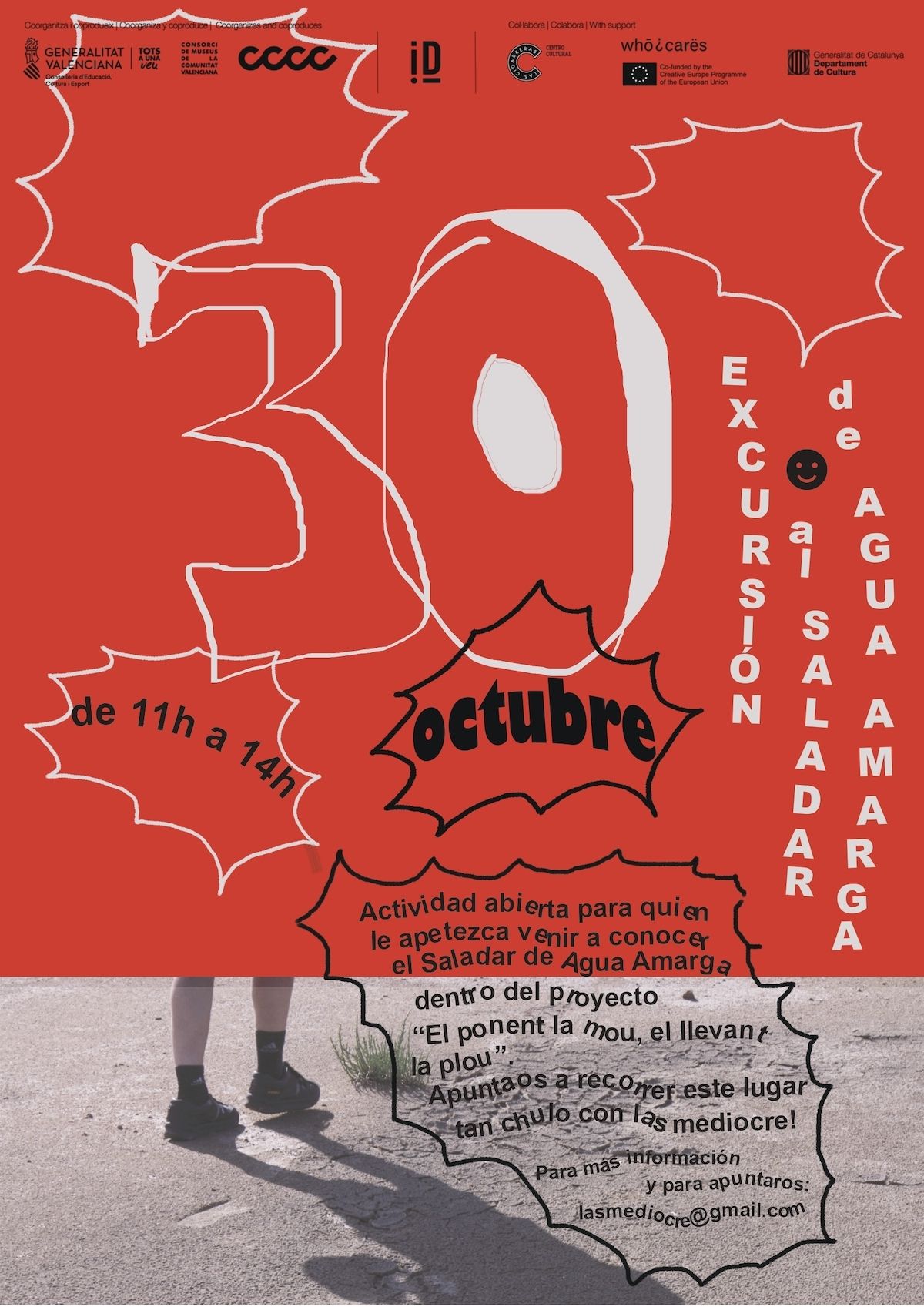 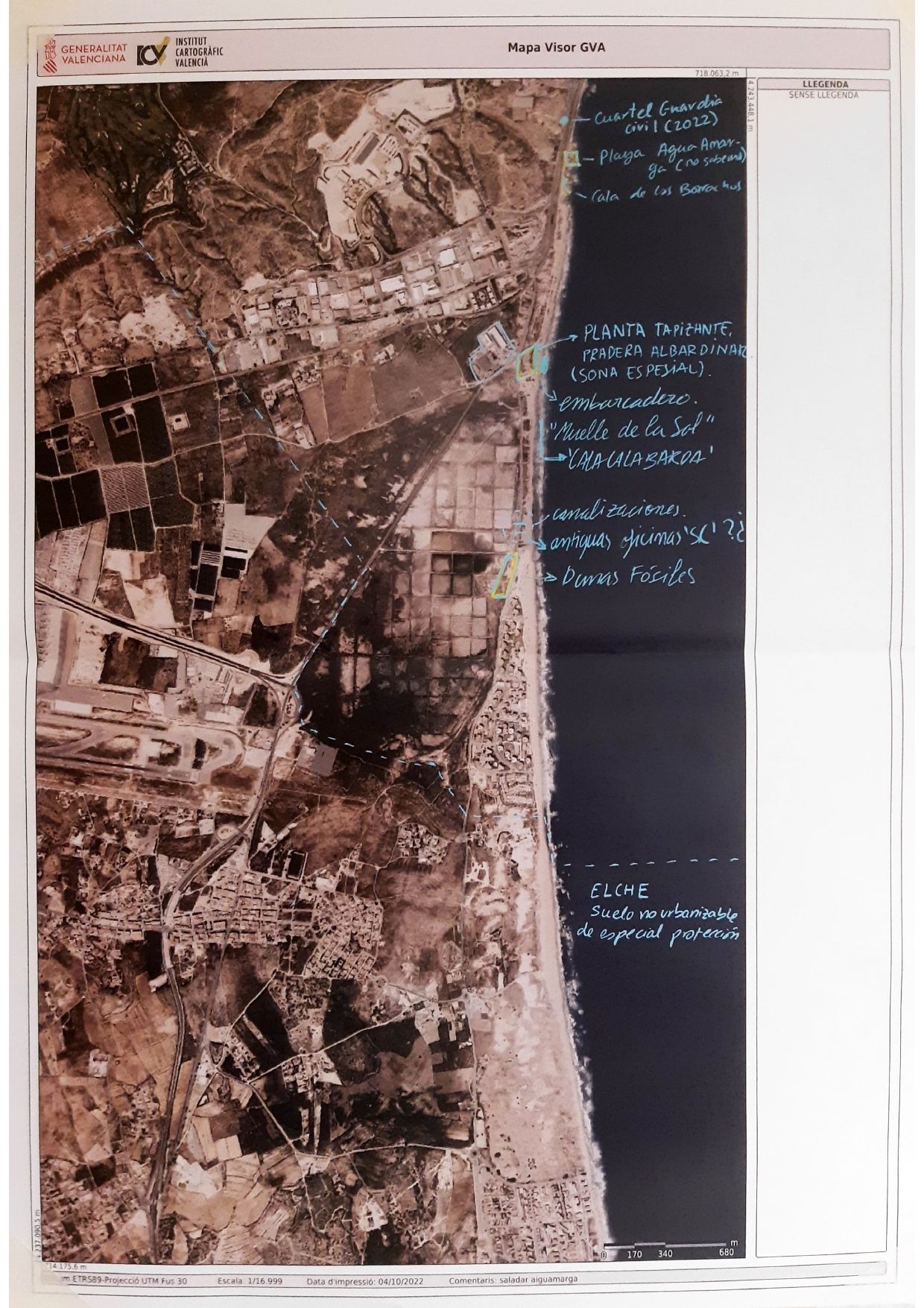 October 23rd, November 6th and 12th, from 11 a.m. to 2 p.m
In the first two outings we will visit the old salt mines, where we will discuss the botanical and socio-political characteristics of the area. On the 12th, we will take breakfast at 11:30 a.m. at the Centro Cultural Las Cigarreras (Alicante), where all the participants in the outings will gather.
If you like the idea and wish to attend on these dates, send an email to This email address is being protected from spambots. You need JavaScript enabled to view it. before October 17th
October 30th and November 26th

On October 30th, there will be an outing open to the general public facilitated by Las Mediocre where they will share some of the knowledge and archives gathered during their first month of residence. On November 26th, there will be a public presentation of the project at Centro Cultural Las Cigarreras to share the results and processes which emerged during the residence period.

BIO
Las mediocre are an artistic collective, arising from bonds of friendship, which presently comprises eight women. They met at the Faculty of Fine Arts of the Polytechnic University of Valencia, where they discovered their artistic affinities. The continuity of the group is based on mutual understanding between its members, and their ability to approach projects from a variety of artistic perspectives. Two of the themes which they explore are games, and the commons. Since the group was created in 2017, they have carried out several projects, a notable inflection point being Almuerzo Campestre (2019), which laid the foundations for subsequent work. They have taken part in curatorial projects (Expopiloto, 2019), conferences (Neither abilities nor intellect, 2020), interventions in spaces such as Galeria Punto (Caribe Mix 2020) and various actions (Volando Precario, 2021 and Castillos de Arena, 2022). They are currently developing an exhibition project that will take place from April 2022 in Pols (Valencia).

Actions within the framework of the Transversal Aesthetics project. Immunity～Community of Identity with the Consortium of Museums of the Valencian Community and the collaboration of the Les Cigarreres Cultural Center in Alicante.