IDENSITAT and CENTRO DE ARTE CONTEMPORÁNEO HUARTE calls for the programme Transversals Aesthetics / Ecosystems of Fiction to develop a project within the social context of the towns of Huarte, Burlada and Villava (Navarra). The programme will run between 2019 and 2020.

WORK CONTEXT
The town of Huarte, where the Huarte Centre is located, stands next to the towns of Burlada and Villava on the outskirts of Pamplona. The three localities follow the course of the river Arga, which has generated historical and cultural links among them. In recent years, the boundaries between rural and urban areas in these towns have been modified, due to urban and population growth, the conversion of gardens/allotments into leisure spaces, and changes in leisure habits, among other reasons. The focus of interest of the project to be developed is the study of this area's cultural/environmental ecosystem related to the imaginary, to activate work processes from perspectives such as the utopian, the dystopian or fictionalised realities. From imagining other possible ecosystems, to analysing existing ones in order to create or fictionalise other realities. The territorial node or involved group, and the educational activities will be activated through local social groups and educational institutions interested in joining with this focus. The selected project will develop its work based upon this context.

THEME: ECOSYSTEMS OF FICTION
The chosen project will examine the tensions, paradoxes or connections between the realities and fictions imagined about the river or its urban configuration, modeled after the route of the Arga River as it passes through the towns of Huarte, Villava and Burlada.  Following the course of the river itself as a flow which traces outs and blurs the landscape, as a natural element that shapes and at the same time blurs the boundaries between the rural and the urban. Similarly, the boundary between the real and the imaginary, visualised as an imprecise flow, is presented here as a recurrent element and a way of working by using both artistic and educational practices, applied to the local context.  It is interesting to study the correlation of both binomials, rural/urban and real/imaginary, as concepts which serve in the analysis a specific context from a creative point of view, also involving the social, economic and geographical visions of the context. Many fictitious realities may emerge from such study practices, generating new "imagined cities" or "fictional realities" which are not so far from the cartographic territories that we consider to be real and existing. An opportunity to imagine the utopian or the dystopian, from elements offered by the context. In this case, the new visions that arise around this ecosystem, are driven by artistic practices applied to organisations of a social nature, and spaces for educational action.

METHODOLOGY
The work carried out as part of Transversal Aesthetics will follow three common strands: a temporary Artistic Residence, with the participation of an artist or a collective in order to create and research the context; setting up a local node involving various regional agents and associations; and an Educational Activities Device, to share knowledge and learning tools.These three strands may cross over, they may work in unison, or they may coexist in parallel, and submitted proposals must include observations regarding a project’s deployment across these strands, and the interaction among them.   The local nodes may comprise a number of agents, organisations or individuals interested in participating, or which are associated with social, artistic or research contexts on the theme. Prior to the development of the artistic project and/or educational action, the nodes may vary, or may increase in their development. The artist or collective must propose a project involving the node, and must add their own agents to the network, which may be  more or less involved, depending upon their role within the project’s framework. The project will be carried out in a triangular fashion, proposing workshops or interventions in public space, open presentations and production of results. 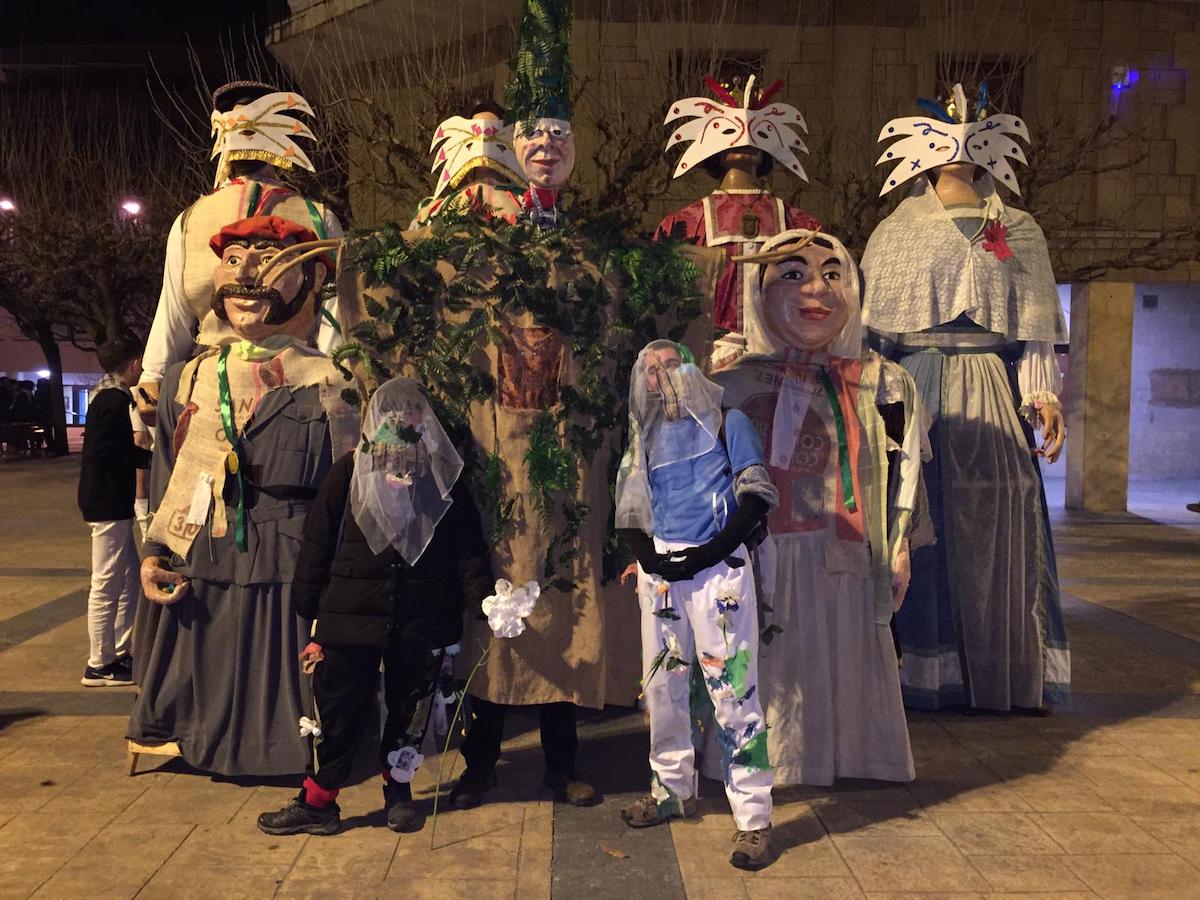 De perdidos al río, by Joana Capella and Roc Domingo, is the project selected through the Transversal Aesthetics - Ecosystems of Fiction open call, based on a residency aimed at examining the relationship between reality and fiction as applied to the context of the Arga River in its passage through the towns of Burlada, Villava and Huarte.
The project will experiment with the imaginary as connected to memory and the identity attached to the river, and the construction of a new mutant imaginary elaborated through fiction itself. The main idea is that both the bridges and dams built since the middle ages, and the recreational and sporting activities practised in the area, contribute to the construction and maintenance of a concrete imaginary which prevails over others, or creates a tension between them.
The project takes the form of organised games, the Arga Games, with the emphasis on play and festivity.
A social and creative event, which as part of its process includes; strategies to connect with groups which are active in issues regarding the river; a collective exploration to gather waste from the buildings adjacent to it; a collaborative design of clothing, composition of songs, and other creative productions to help in generating a representative imaginary; and an assemblage workshop to suggest how to combine the detritus fished out of the river into new symbols, which evoke the relationship between past and
future.
The aim of these activities is to create new fictions about the river and its surroundings, given that fiction is the new reality in which we live, but which also contains other possibilities, other realisable fictions.

The first stage of the residence of Roc Domingo and Joana Capella as part of the programme of Transversal Aesthetics, Ecosystems of Fiction took place from the 3rd to 16th February,

During the first few days, the objective was to find out about the terrain and the courses of the Arga and Ultzama rivers. The methodology used, that of roaming around the river, gave them time to see the rivers’ surroundings with a different perspective, beyond the aesthetic, recognising garbage as ornamentation on the rivers, like a garland. In addition to visiting the rivers, they contacted the PrintLAB of the Huarte Centre for Contemporary Art, to experiment with different techniques, and to explore the kinds of images to be created using the materials collected during these riverbank walks.

At the end of this first stage, Joana and Roc then prepared for the second stage of their residence, a pilgrimage to the Arga River, aiming to open up an opportunity for experimentation and critical thought about the river. Using this device, the artists’ intend to revisit the imaginaries that emerge from the river, based on the unexpected and ever-changing visual resources provided by the river itself, landscapes, textures, colours and / or disparate materials, plastics, rubbish. 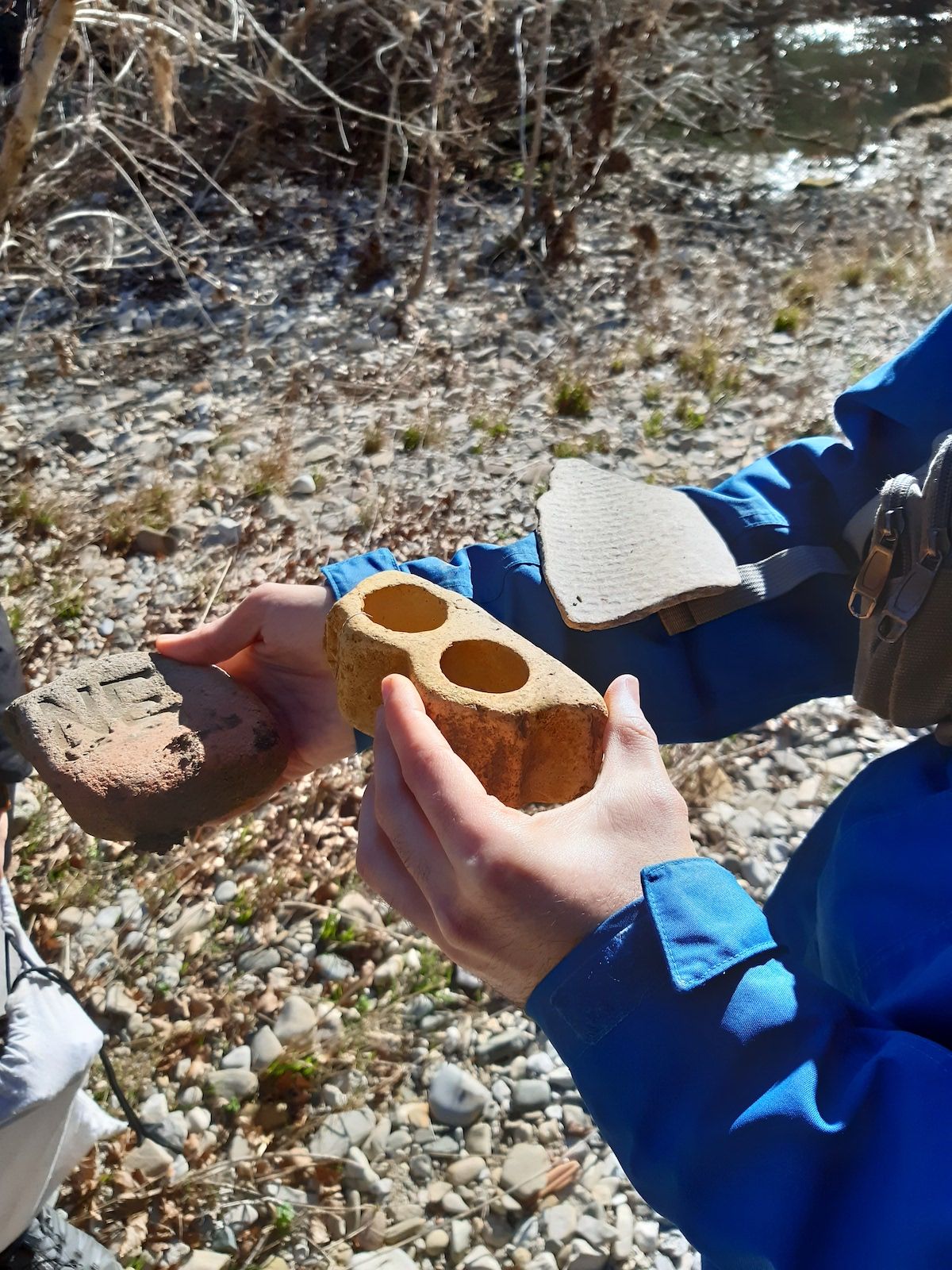 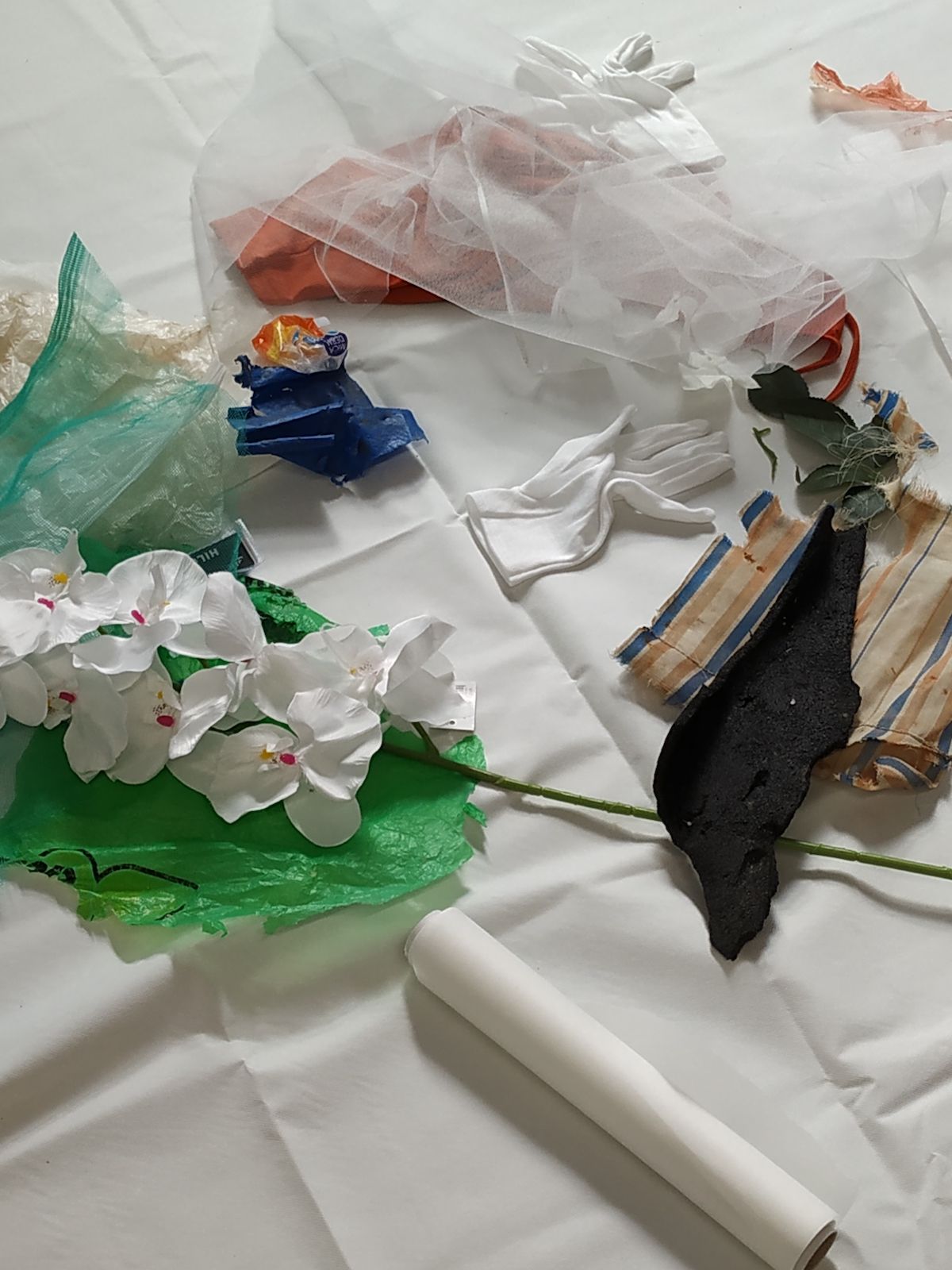 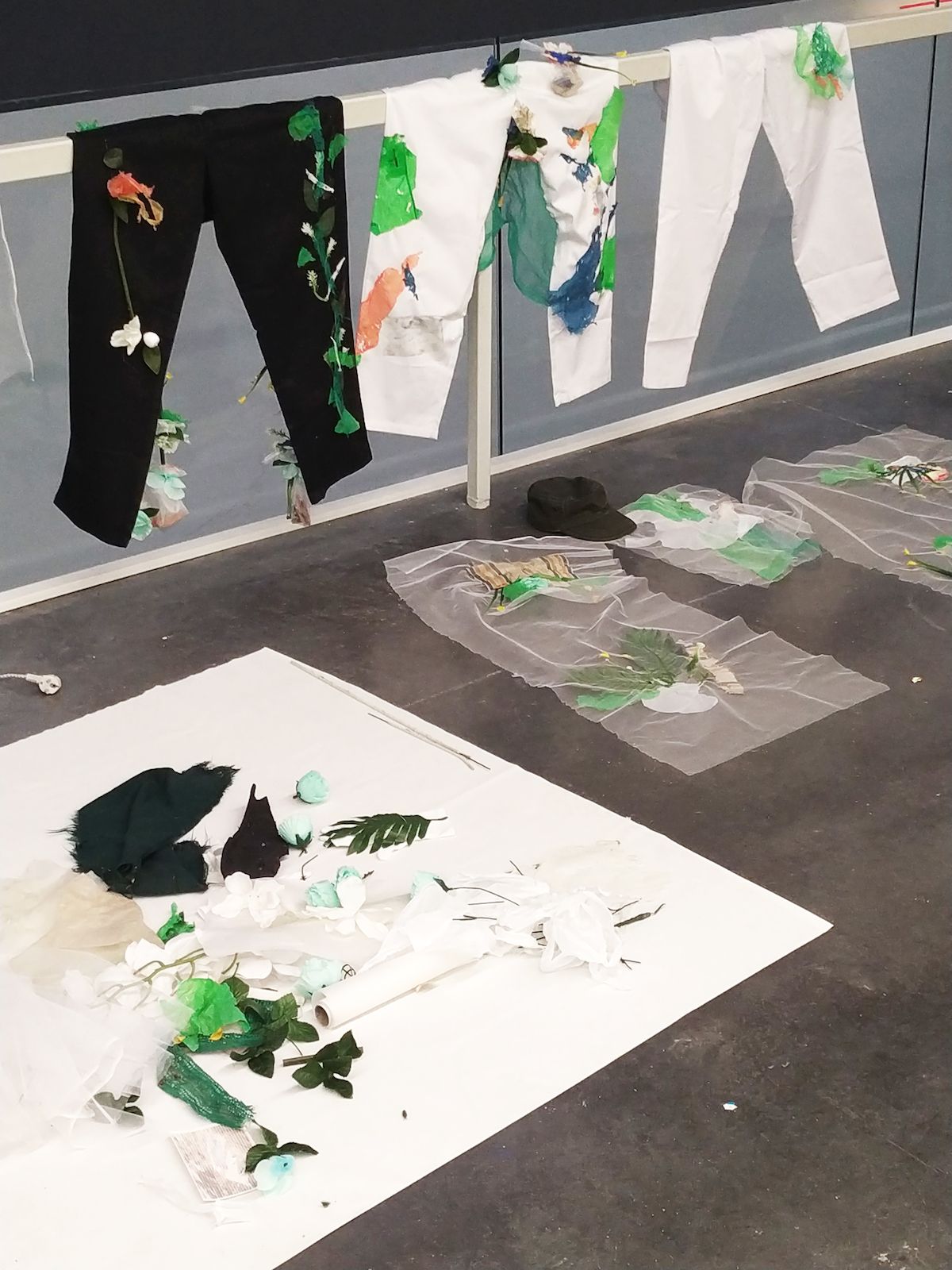 RESIDENCY, PHASE 2
Huarte, from October 5 to 11
After a few months without being able to travel, Joana and Roc were able to return to Huarte to conduct the Pilgrimage which they had proposed to make at the end of their first stay. Between the two stages of their residence, covid appeared, and with it came the lockdown. The conditions of the project changed, and could not be ignored. The time of work between the two stages has allowed for a rethinking of the project, modifying the initial conception in response to the current situation. Initially, the idea was to realise a collaborative action, a festive Pilgrimage along the Arga River, which would mark the end of the project. Based upon an Auzolan, it was conceived as a summons to the citizens to clean and collect waste in the river; followed by a week of workshops that, functioning as an “experimental training space” around the river, would provide the elements with which to define the imaginary for the final action: the Pilgrimage along the Arga. The Pilgrimage was planned as a festival, in which there would be food, drink and music, which would also serve as a space to share the symbolic imaginary which was produced, turning it into the fiction which envelops the act itself. This action would have been open to all participants in the process, and to anyone else who may have been interested in it. But reality asserted itself, and plans had to be changed. The Auzolan was not called, but Joana and Roc did it anyway, without anyone else around. So, the Pilgrimage became a lonely journey that linked the Huarte centre with the Góngora waste treatment centre, following the course of the Arga river, passing through Burlada and Villava. This action has been documented and realised in a long-form audio-visual piece. This piece is conceived as a film shot as a plan sequence that captures the entire journey. The interest of the plan sequence is focused upon transmitting the solemnity and density of the action of walking during the three hours of the journey. The audiovisual piece is accompanied by a text that allows the creators to relate their action to the location, opening out those external elements that come into play with the image, and the whispers in silence. Joana Capella Buendia (Sant Fost de Campsentelles, 1990), is a graduate in design, specialising in multidisciplinary management, from the ESDi (Universitat Ramon Llull), and in the master’s degree course in research and experimentation in design from Bau (Barcelona). Part of her work has been exhibited at the Casa Tres Patios (Medellín), La Escocesa, Sala d’Art Jove, Utopia 126, Escola Massana (Barcelona); and she has taken part in several conferences, and has contributed to a number of publications, such as “Quadern de les idees les arts i les lletres" (Sabadell); Art & Speculative futures (CCCB, Barcelona); Interface Politics Congress (Hangar, Barcelona; Diseño y cultura Digital (Medialab Prado, Madrid). Her artistic practice, as well as her many collaborations, move between research, curation and production. Her projects turn around the conditions which the production of art and knowledge make possible, as well as the relationship between the artist and the idea of the profession and work, examining the way in which the items, languages and times which we create take on a life of their own.
www.joanacapellabuendia.hotlgue.me

Roc Domingo Puig (Lleida, 1992) has the Superior degree in Design and Illustration from EAM (Lleida), and is a graduate in Fine Arts of the Universidad de Barcelona. Currently he is artist in residence at EART (Barcelona) and is a member of the KGG collective. Some of his works have been exhibited at the Casa Tres Patios (Medellín), Casa 916 (Concepción), Casa Aparte (Cuenca), ICPNA (Iquitos), La Escocesa, Àngels Barcelona, La Usurpada (Barcelona), CAC Bòlit (Girona), and he has published an article in the latest edition of the magazine Arts (Lleida). His artistic production fluctuates between visual production, curation and education. His latest projects examine traditions, habits and customs connected to particular localities, as well as the material conditions which gave rise to them.