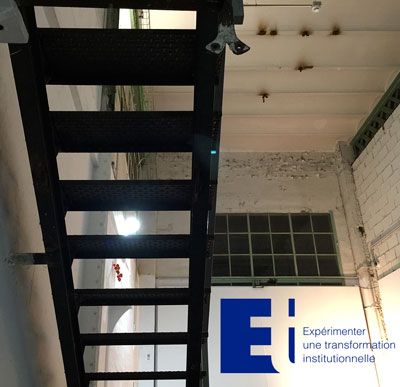 ETI Barcelona is a project by Idensitat in association with La Escocesa, a collaborative process between artists and non-artists to reframe a new institutional space. A transition space, based on the theme of “reconsidering the institution”, will be generated, a space which will be sensitive to the interaction between social and creative practices, in which it is possible to reimagine other locations for culture based upon new social complexities and the diversity of audiences. ETI (Experimenter une Transformation Institutional) is a European project involving Ecole Nationale d’Art (ENDA) - Paris, Idensitat - Barcelona, Fondation Bottari Lattes - Turin and Minitremu – Targu-Mures, and is co-funded by Creative Europe.

ETI Barcelona places creative practice within the framework of research and a redefinition of contexts, interpreted by way of a critical, counter-disciplinary vision orientated towards discovering, defining and proposing concrete actions. Participation in this process must be carried out by an artist, in collaboration with a nominee linked to a non-artistic organisation or institution in the Poble Nou neighbourhood (Barcelona), who together with Idensitat and La Escocesa, will define the realisation of the process. If the artist does not propose a pre-established connection with a non-artistic nominee or institution, Idensitat and La Escocesa may participate in the definition of this framework.

ETI Barcelona is structured through:
- Research/action in residence. 2 artistic research projects exploring the transformations and the new imaginary related to the institution. Projects which also experiment with the activation of processes involving an institution and a nominee who is linked to a non-artistic institution of the Poblenou neighbourhood.

- Workgroup. The research group will comprise artists selected in the call, IDENSITAT, and LA ESCOCESA, to help shape the framework proposed by ETI Barcelona. In this group, research work will be undertaken, investigating, sharing and reconsidering methodologies of relationship-building between artistic extra-artistic institutions. The working group will be activated in parallel to research activities, and will meet in La Escocesa for a number of sessions during its development.

ETI, as a general project, will conclude with a conference organised in Paris in 2021, where all the experiments carried out in Barcelona, ​​Targu-Mures, Turin and Paris will be presented.

pli-é collective is a research and curatorial group with Eva Paià, Marina Ribot Pallicer and Angelica Tognetti. With this shared initiative, they aim to find ways and tools to problematise the museum space as an institutionalised space.

With Aseptic Imaginaries, the group sets up an investigation encompassing the suite of relationships and analogies between museum space and clinical space (their architectural and relational characteristics), as well as analysing the hygienist norms that structure them. This approach allows pli-é to open up a critical reflection on the task of curatorship, returning the word to its original meaning which relates it to curing and caring; in order to imagine other ways of making art beyond the white cube, and in order to discuss the possibility of the creation of new institutions designed to be warm and open spaces.
For this investigation, the group’s intention is to put into practice the different strategies they have developed as a collective: placing the processes of listening and caring at the centre of all interventions.

Conversation group. This group is formed by the members of the pli-é collective,  Eva Paià, Marina Ribot Pallicer and Angelica Tognetti, together with IDENSITAT and LA ESCOCESA, in order to help shape the research framework proposed by ETI Barcelona.

The group will assemble the investigation by questioning, sharing and rethinking concepts such as care, contagion, contact, body, collective vulnerability, taking as a starting point the project "Aseptic Imaginaries" which researches the connections between artistic and medical institutions.

The group will meet periodically for sessions of reading and conversation, aiming to create a documentary archive accessible to the general public, and to make an ongoing critical reflection as a group, imagining other possible scenarios.

ETI Barcelona Archive
In the framework of the ETI project, Idensitat has created an audiovisual project in which it creatively collects elements of the process based on interactions with the different agents involved.
#01 Cultivar los cuidados / From the conversation group (Idensitat + Pli-é collective) / APRIL 2020

The project is the first European event dedicated to new forms of contemporary art institutions. It is based on the emergence of artistic practices that materialise other than into works of art. By acting through other economic sectors than art, these artistic practices incorporate dynamics of exchange and external values to art, from which the institution could reformulate itself.

ETI’s aims are to experiment with new ways and configurations for art institutions. The project will be an opportunity for the audience and committed artists to reformulate three European art institutions through their own practices in order to question how the institution can recompile itself with an eye on society in the 21st century.

Eti proposes to put the diversity of citizens, actors of the world of art and artists at the centre of the institution in order to establish new relationships. It thus enables the artists and experts involved to formulate new interactions with the organisation's management and programming. In this way the project plans to move from a logic of democratisation (dissemination of the cultural object itself to the set of viewers themselves) to a logic of cultural democracy (each viewer brings their expertise to bear on an object of experimentation).   ETI involves experimenting with the institution's capacity to transform itself by integrating an artistic diversity which is foreign to it, since these practices interact with sectors outside the traditional art sector.

Artists disseminate an ecosystem in which artistic practice develops: partners, collaborators or infrastructures which are their means of production, of distribution, and reception. This ecosystem is governed by other forms of interaction than those prevailing in the art institution, on the one hand because these interactions exist outside the art institution, and on the other hand because the nature of its practices largely call into question the status of the public-spectator. Indeed the nature of these practices does not imply raising the visibility of a single object, but of activities that may be approached in multiple ways.    The general strategy of the project is to implement within art institutions, different content and artists from those usually on offer by pooling specificities and local issues on a European scale. Another dimension of the strategy consists in bringing together the experimentation of partners who are not from the arts sector. In short, it is a matter of changing the very nature of the art institution, participating in the project in an untapped way.