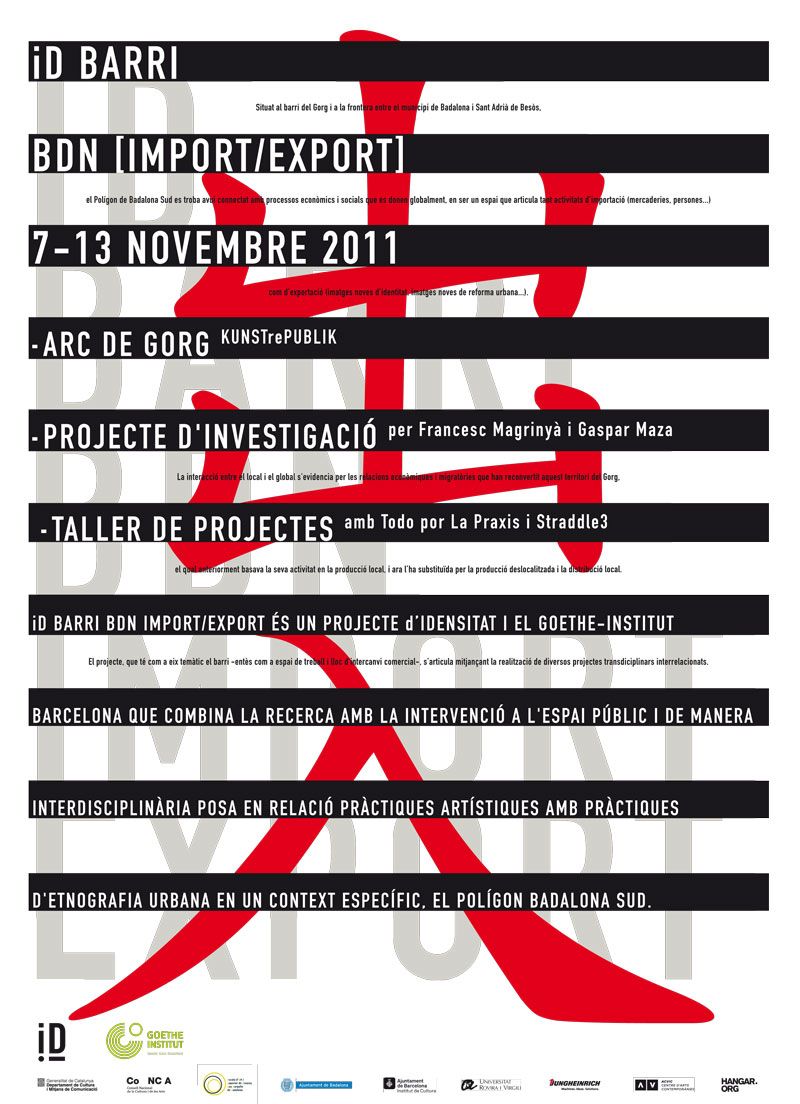 07-11.11. 2011
The Temporary Furniture workshop, led by Straddle3 and Todo por la Praxis, was developed in collaboration with Pau Gargallo School of Art and Design of Badalona, and with the participation of Francesc Magrinyà, Gaspar Maza and Ramon Parramon, and was carried out between the 7th and the 11th of November 2011 in the Antic Escorxador of Badalona.

12.11.2011
On November the 12th, in the Escorxador in La Salut, the project culminated in an intervention in public space, during which the results of the workshop were displayed. The recreational day was carried out with the participation of Gorg Mar and La Salut Neighbourhood Associations, and included several open activities, such as testing out the furniture produced in the workshop, a session of debate, a live grafitti by CHAN (AAVV Amics La Salut) and a communal paella, with music and other festive activities.

The aim of the workshop was to generate, through collective construction using recycled materials, temporary urban furniture, nomadic mobile infrastructures in public space, for use according to demand or in emerging situations of citizen mobilisation. At a time when public space is regaining its position as a stage for visibility and collective claims, items such as these could help during mobilisations, but could also become in themselves generators of festive and recreational support in these situations.

As part of the workshop, an open seminar was held on the historical background of the site, the use of public space within the district, strategies of visibility in collective demands, and the global phenomenon of import / export, as well as a briefing on projects then underway.

- To promote the development of creative projects connecting local actions in the context of the Gorg district.
- To generate proposals and display data based upon direct contact with the district.
- To promote experiments based upon design and intervention in a city context using the principle of shared creativity.
- To learn the specifics of place, historical trajectory, existing projects.
- To analyse, and experiment with, the use of public space in districts.
- To learn the global dynamics which affect a district and its relationships in a metropolitan context.

Opening sessions on Monday November 7th included presentations by Ramon Parramon (IDENSITAT), Naomí Daniel (Badalona Council of Culture), Gaspar Maza (URV), Francesc Magrinyà (UPC) and Guillermo Cruz, David Juárez (Straddle3) and Diego Peris (Todo por la Praxis); and walks around the area of Gorg and the South Badalona Industrial Estate, led by Francesc Magrinyà (UPC), ending in a meeting with members of Gorg Mar's Neighbours Association. Between Tuesday November 8th and Friday November 9th, the design and construction of the prototype were undertaken and completed, with presentations by Sergi Arenas from the Badalona Skateboard Club, and Miquel Aregay and students of the Pau Gargallo School of Art and Design of Badalona, together with members of Plataforma Bufalà, as part of the Mediateca CUB.

KUNSTrePUBLIK.Artists' collective formed in Berlin, comprising Matthias Einhoff, Philip Horst, Markus Lohmann, Harry Sachs and Daniel Seiple. Through art, the group explores and generates interventions in the public sphere and in other social arenas. They have conducted numerous workshops on seeking alternative strategies for subversion in public art. In collaboration with the Goethe-Institut they have participated in many international projects (Lahore, Budapest, Bratislava, St. Petersburg, Bangalore). KUNSTrePUBLIK members work both collaboratively and independently as artists, curators, educators, organizers and city planners, according to every demand, invitation, place or situation.[Http://www.kunstrepublik.de]

Straddle3 - David Juarez Latimer-Knowles. Architect, founding member of Straddle3, a group dedicated to architecture and communication. From this platform, he has completed several projects on issues of housing, public space, digital public domain and participatory planning. His notable works include the housing in the Rambla del Raval, an award-winning project at the congress of the UIA, or more recently, a few houses built from container boxes and other recycled materials. Regarding interventions in public space, in 2006 he launched the project Dome, a collapsible geodesic structure, in collaboration with the group Hackitectura from Seville, which became the prototype of the Wikiplaza. In recent years, he has created other portable structures, sometimes in collaboration with the studio Urban Recipes.[ Http://straddle3.net].

Todo Por la Praxis. They define themselves as a laboratory for aesthetic projects of cultural resistance, a laboratory developing tools for intervention in public space. They pursue the aim of generating a catalogue of socially effective direct action tools for reclaming the right to housing and the right to the city. Their projects focus on the theme of urban issues: city and territory. Their "battlefield" falls mainly in public space, with the development of projects of procedural nature, and with temporary interventions and actions. They employ multiple methodologies, broadly dividing into two blocks; on one hand, those which support strategies of increasing public profile, and on the other, those which start with collaborative methods of participation.[http://www.todoporlapraxis.es]


IDENSITAT is an arts project investigating ways to influence public space through creative proposals in relation to places and territories, exploring their physical and social aspects. It positions itself as a platform for production and networked research for the arts, with which to attempt new forms of involvement and interaction in social space. Projects developed in the workshop will form part of the Idensitat Archive, with the aim of discovering mechanisms of production which may be adapted to specific dynamics within a local context.