NEXES is a project that opens up a second phase within the iD Barri Besòs programme. In the first phase, called Isolation and Connections, the subject of limits and boundaries between neighbourhoods near the bed of the river Besòs de Barcelona were discussed. In this case, giving continuity to the established relationships with groups and agents of the area, and extending it to other neighbourhoods of the city, the relationship between the concepts of limit and boundary is taken from various conditions linked to the concept of precariousness, and to the possibilities of establishing nexuses to transgress the barriers imposed by situations of vulnerability.
NEXES promotes contextualised field research, shared learning, knowledge exchange and the socialisation of processes and results, based upon artistic practice, and with active public involvement in processes of collective creation, processes which pursue social innovation in a local context crossed by the tensions generated by precariousness (from the subjective and in relation to the symbolic, the emotional, the spatial, the economic, the social and the political), and made explicit in certain people, groups or territories. Precariousness means being subjected to a situation of vulnerability, fragility or lack of protection. The notion of periphery is often related to the constraints imposed by precariousness, but it can also be a space of possibility, a place from which to deal with the situation in a different way, starting by building new links and connections. The intentions behind NEXES are to highlight subjective relationships to precariousness, but also to confront these relationships by generating situations of creativity that increase the possibilities of interconnection between people or places stigmatised by the conditions that it deploys. The working context of the Nexes project is the zone formed by neighbourhoods near the river Besòs (Trinitat Vella, Buen Pastor, Baró de Viver, La Segrera, San Andreu), peripheral neighbourhoods which, like many others, present situations of urban, socio-economic or workplace fragility, and which, for this reason, pose situations that present obstacles in different aspects of the everyday lives of those who inhabit them.
NEXES works with people living in these contexts, and with groups from a variety of backgrounds organised around neighbourhood organisations, groups or communities (in this case organisations which include migrants, Roma and Arab among others) from different origins and years of settling, political refugees; groups which experience and understand precariousness differently, both in relation to the place (neighbourhood, resources, employment situation) and in their condition (emotional, social, cultural).
IDENSITAT establishes a framework of action through creativity from which to raise awareness of, or to contribute to, the improvement of situations of precariousness experienced in the described context, at the same time as comparing these situations with other social, territorial and emotional contexts (for example the Raval). The methodology used is based upon artistic practices connected to social space, in order to generate action leading to a change of perspectives regarding situations of vulnerability and isolation, to build new ways of relating to the context, as well as to draw links between ordinarily unconnected elements. Based on this framework of action, an approach to, and involvement in, cultural areas is encouraged in order to establish new spaces of creation related to coexistence and personal and collective development. 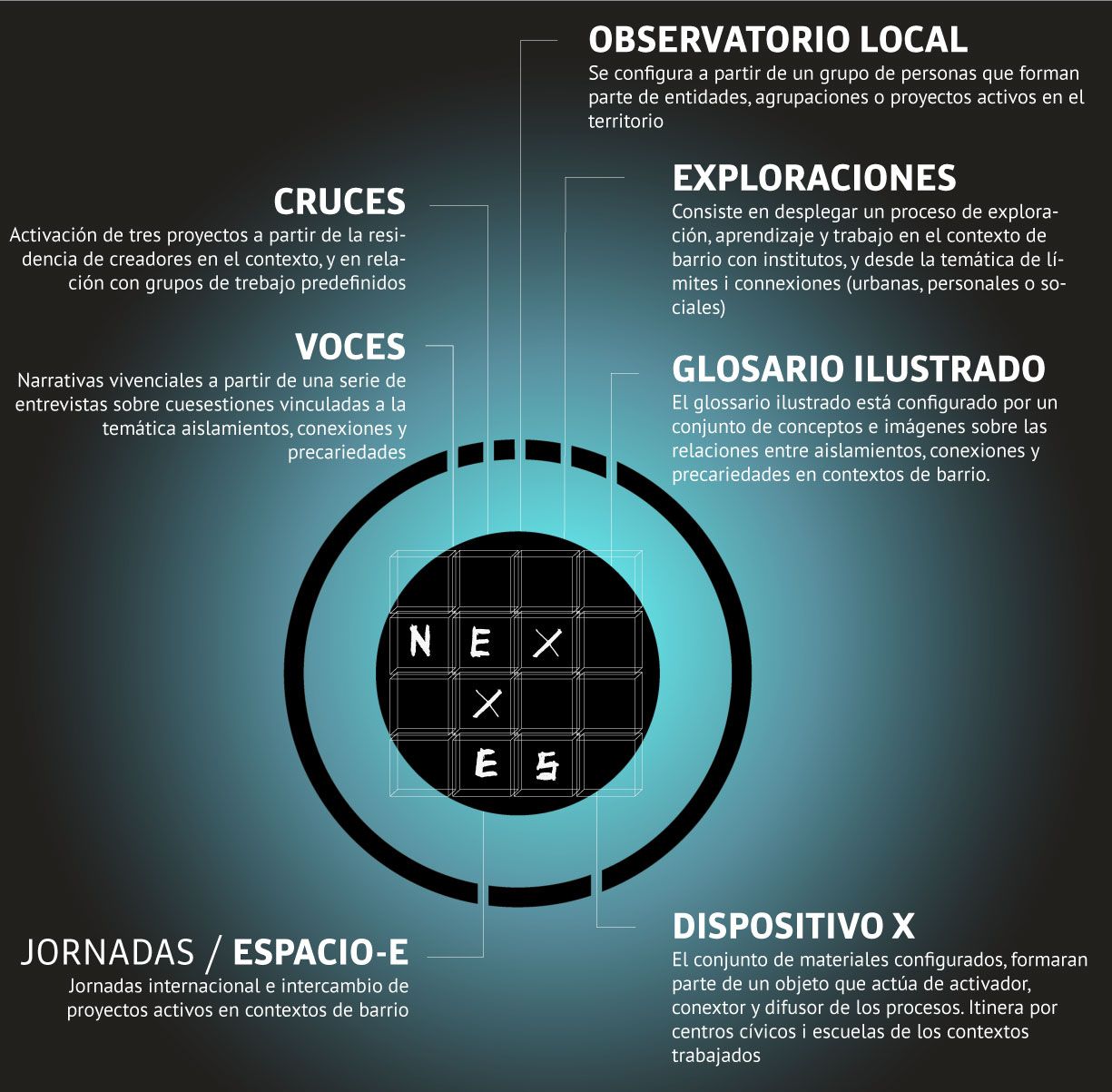 The methodology followed in this project deploys a set of processes affecting the relationship between artistic practices and social space. It aims to generate other perspectives around situations of vulnerability and isolation, to build new ways of relating to the context, and to draw links between elements that are not usually connected to each other. Starting from the issue of precariousness in its economic, cultural and emotional meanings, involvement in cultural areas is encouraged in order to establish new spaces of creation, connecting social coexistence to personal and collective development.

- LOCAL OBSERVATORY. A group made up of members of local organisations or participants in active local projects. Working groups which will interact with the artists invited to participate in Crossings, will be drawn from the Local Observatory. Also from the Local Observatory, a map will be created, based on the theme of isolation and connection, with the aim of finding out projects and processes which link beyond the immediate locality. During a number of different working sessions, these nodes (spaces, projects or processes) will be discovered, and will be visually expressed in an interactive map.

- CROSSINGS. Activation of three projects resulting from the artists' residence in the context, and in relation to defined work groups. The aim of this stage is to set up an autonomous project which, following the overall themes and methodologies, will involve a specific working group, and which will incorporate custom workshops. The artists invited to participate in the CROSSINGS section are Xeito Fole, Núria Güell - Levi Orta and Fito Conesa, who, together with Idensitat, will work respectively with the groups: Acathi, Asociación de Jóvenes Estudiantes Gitanos del Buen Pastor "Rromane Siklyovne (Association of Young Gypsy Students) and a group from the Espai Jove Garcilaso.

Meeting between Habitació 1418 (MACBA), Fito Conesa and the group of Espai Garcilaso. Workshop with different elements that refer to inhabit and occupy the space, such as different forms of housing, natural elements or references to science fiction. Barcelona, 06/01/2018.

- VOICES. Experiential narratives based on a series of interviews on issues related to the themes of isolation, connections and precariousness, involving participants and following specificities of each working group (as defined in the CROSSINGS stage). The voices gathered, and the issues raised during the interviews, will help share strategies for overcoming limitations, and will explain how the involvement of collaborative structures help in confronting conditions of precariousness. 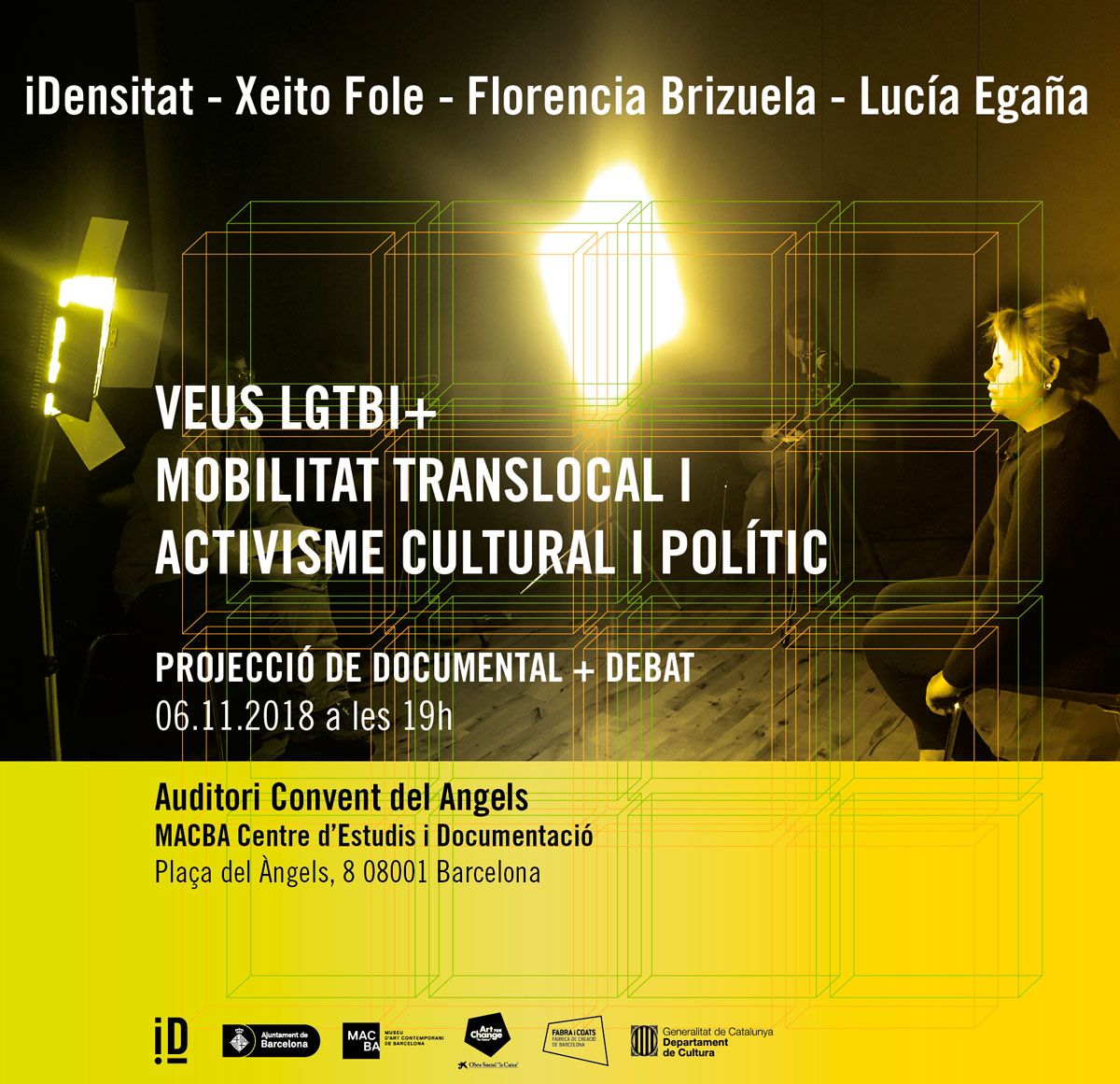 After the viewing of VEUS, a debate is opened around the issues shown in the video; the borders that must be crossed in order to assume and defend a non-normative gender or sexual identity; the situations of vulnerability that so many people face as a result of current policies, or their presence as political subjects in the public space.

In this debate we will be accompanied by Florencia Brizuela, PhD in Law and Political Science from the University of Barcelona, ​​researcher in human rights and postcolonial feminisms, and Lucía Egaña, transfeminist artist and writer, part of the academic direction of the Independent Studies Program of the MACBA Museu d'Art Contemporani de Barcelona and Minipimertv, Reial Arxiu Sudaca and the Tècniques Cooperative collective, and we will also have the participation of some protagonists of the documentary.
The debate will be moderated by Xeito Fole, visual artist, transfeminist and anti-species activist. 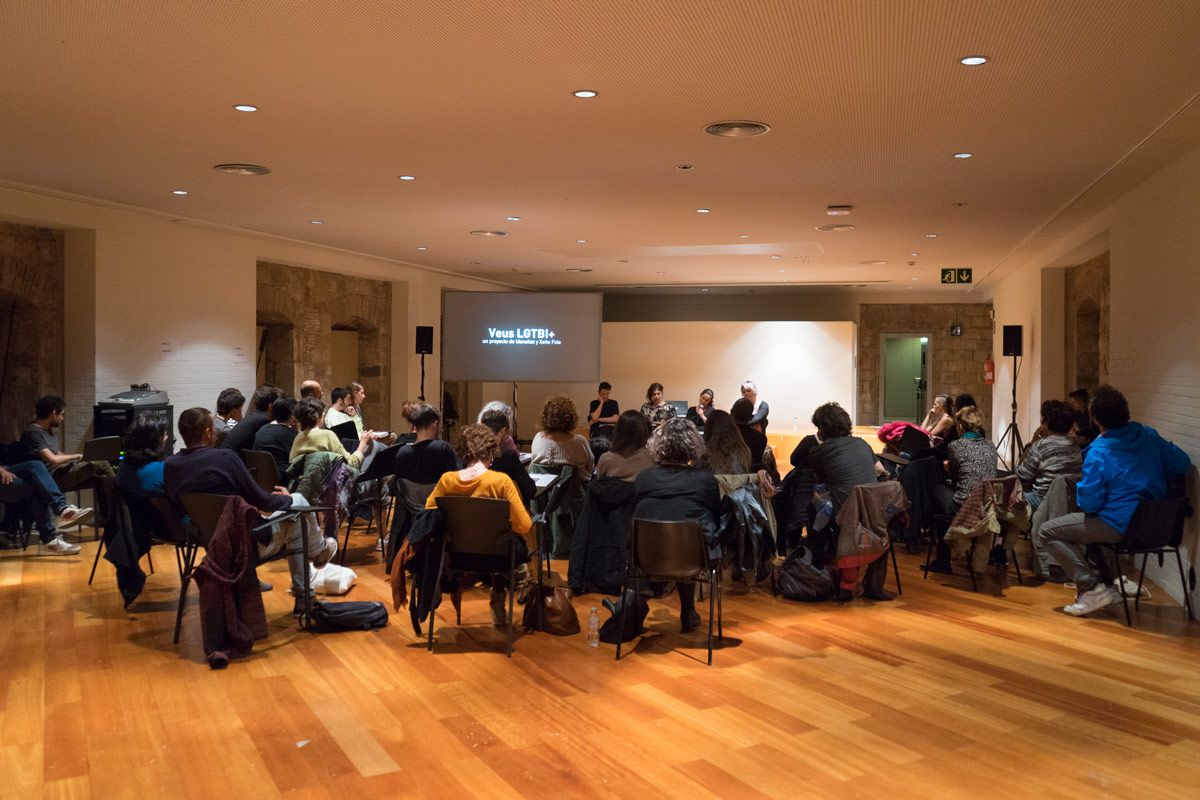 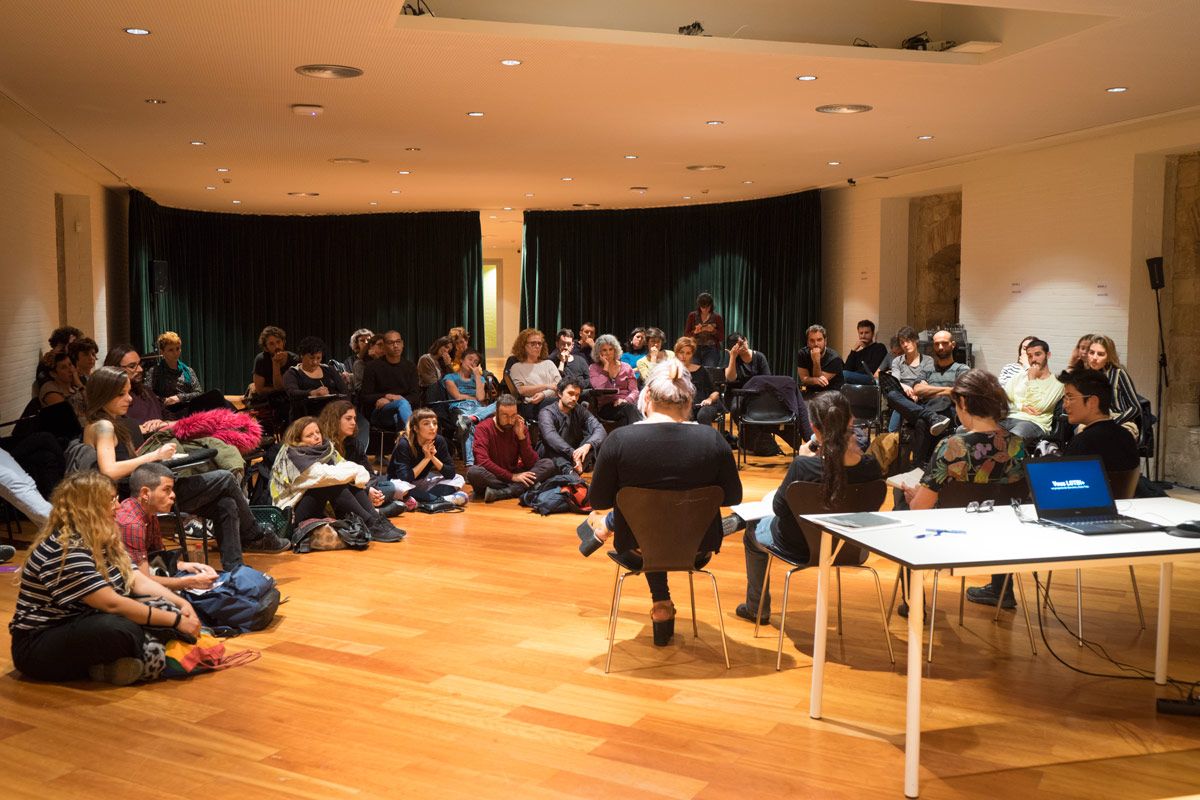 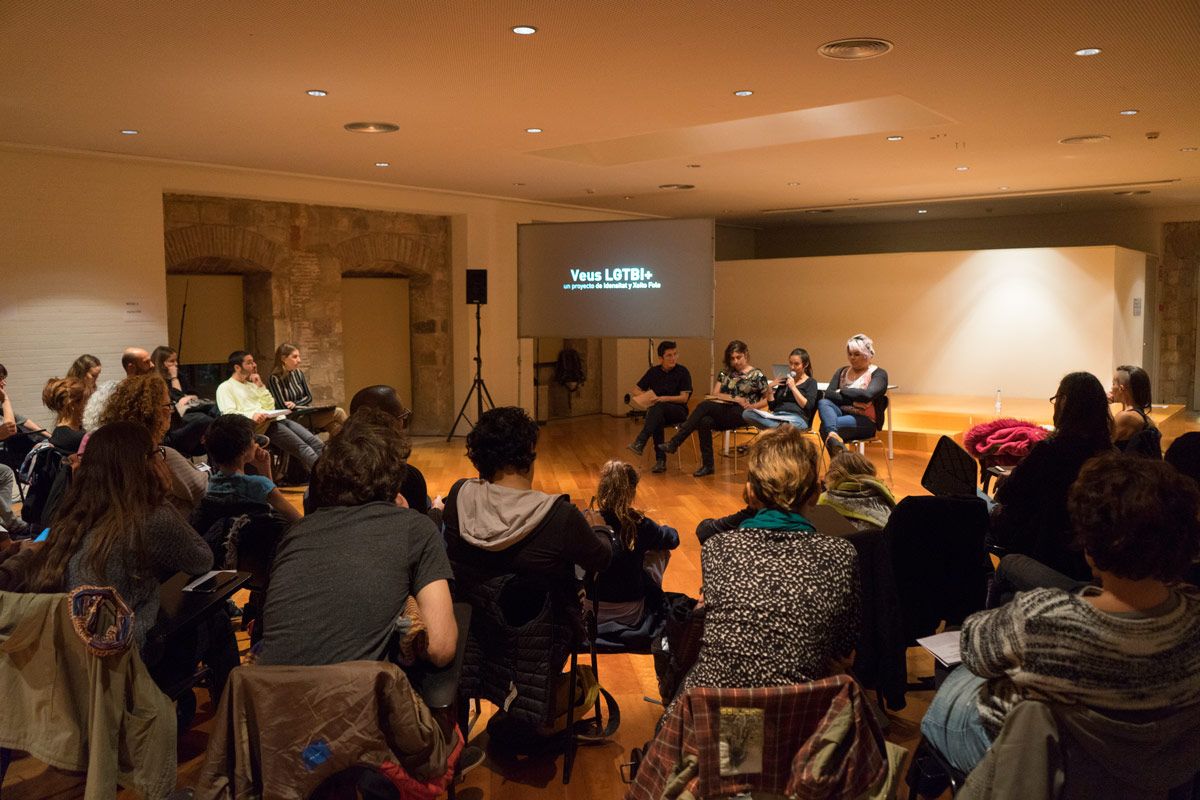 - EXPLORATIONS. This part of the work will be carried out in secondary schools from the Sant Andreu district (near the Besòs area). It consists of a process of exploration, learning and work in the neighbourhood close to the high school, based upon the subject of boundaries or frontiers (urban, personal or social). With the active involvement of teachers and students from a number of secondary schools, walks of exploration will take place, with the aim of bringing a variety of perspectives to the subject. The participating schools are Instituto Doctor Puigvert and Instituto l'Alzina, which bring together students from the neighbourhoods of San Andrés, Baró de Viver, Trinitat Vella, Buen Pastor, La Segrera, Navas, Congreso and Indians.

- GLOSSARY. The illustrated glossary will introduce concepts and images linked to the topics of isolation, connection and precariousness in neighbourhood contexts. The secondary schools involved in Explorations will participate in the construction of this glossary, using the results of their neighbourhood explorations. 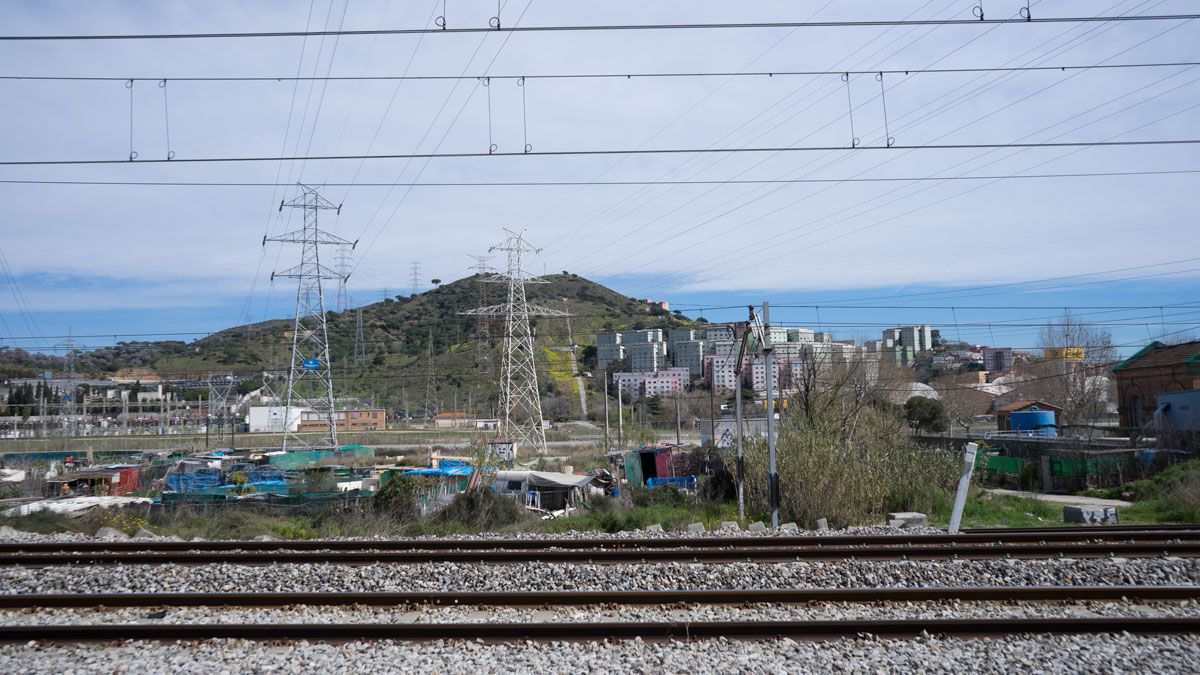 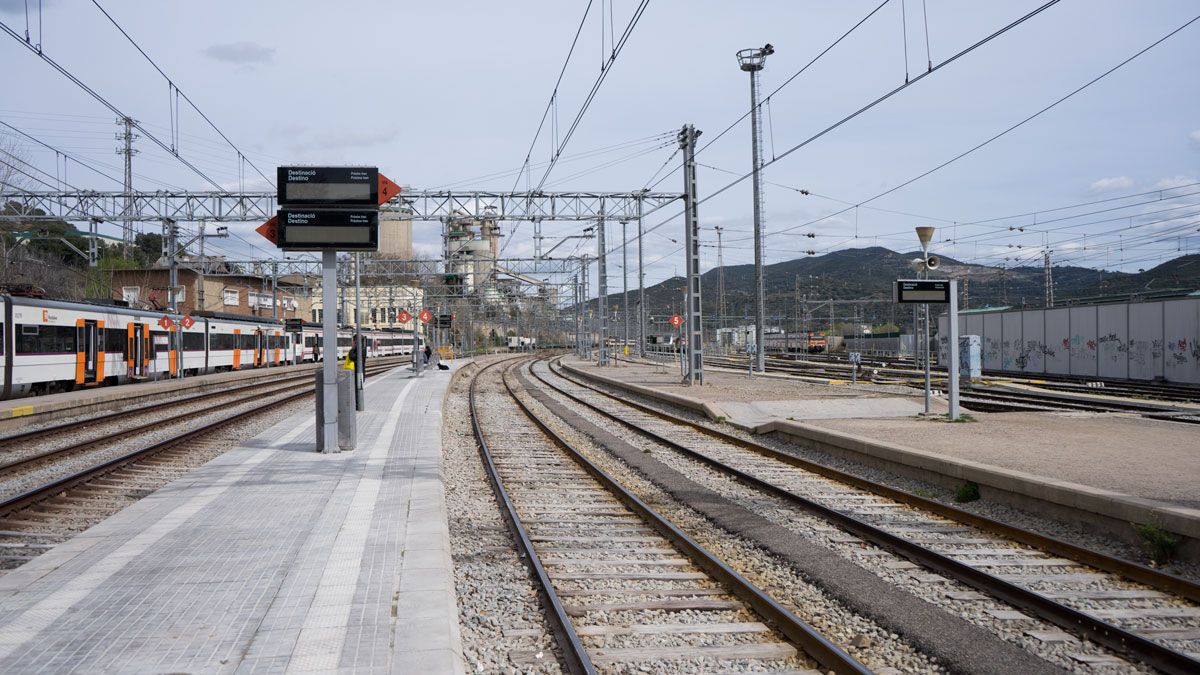 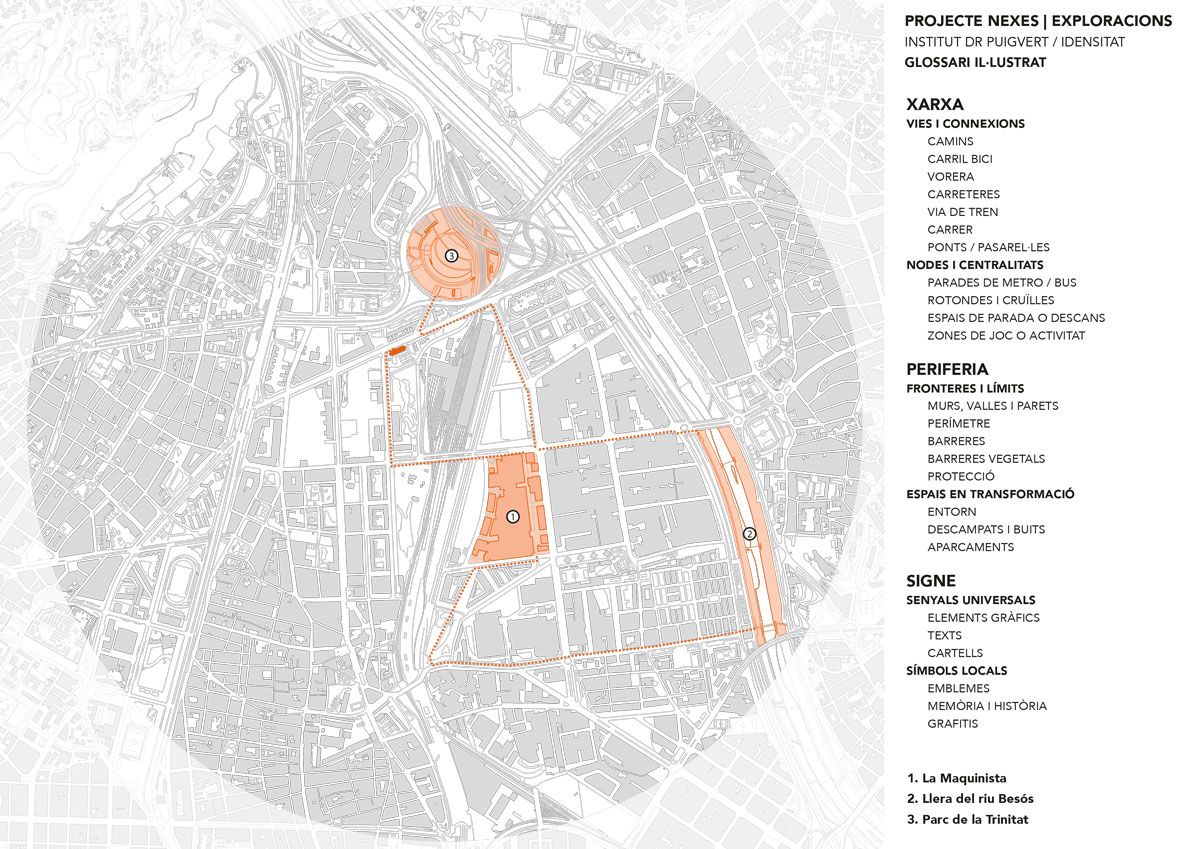 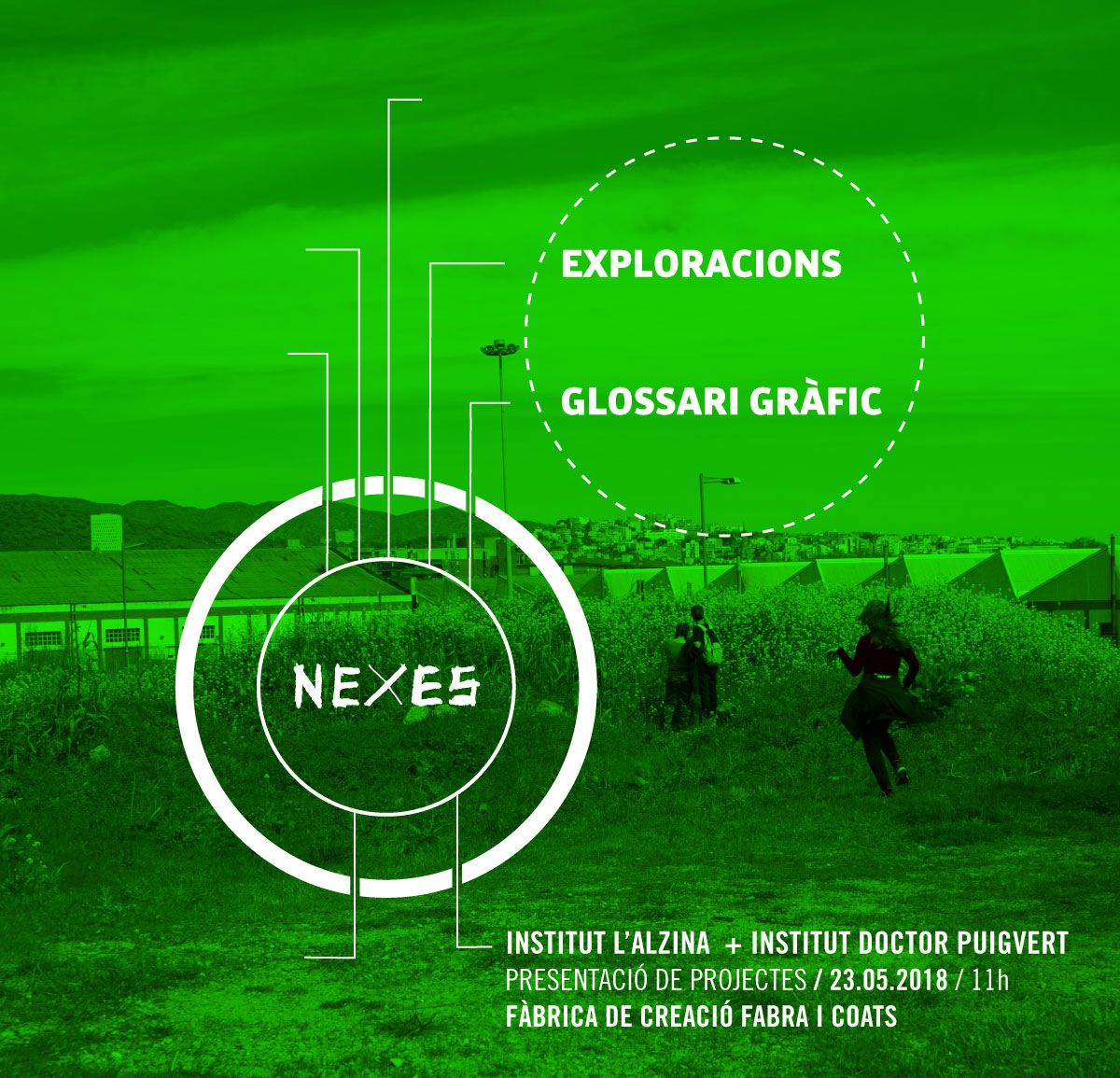 - OPEN SESSIONS, International Seminar with debates, projects presentations, and exchange tables.
Two-day activity open to the general public, but specifically aimed at students and other communities interested in artistic practices in relation to community actions and processes linked to specific contexts.
During the seminar, experts in artistic practices in relation to social contexts will propose topics for discussion, and examples from different related scenarios. The presentation of projects will serve to share active processes in different neighbourhoods of Barcelona, and to publicly introduce the activity developed in the project (Crossings, Voices, Explorations and Glossary) from different working groups, thus forming a common space to share various proposals and the reflections generated. Exchange tables will be available to pool experiences among the different participants and visiting projects. 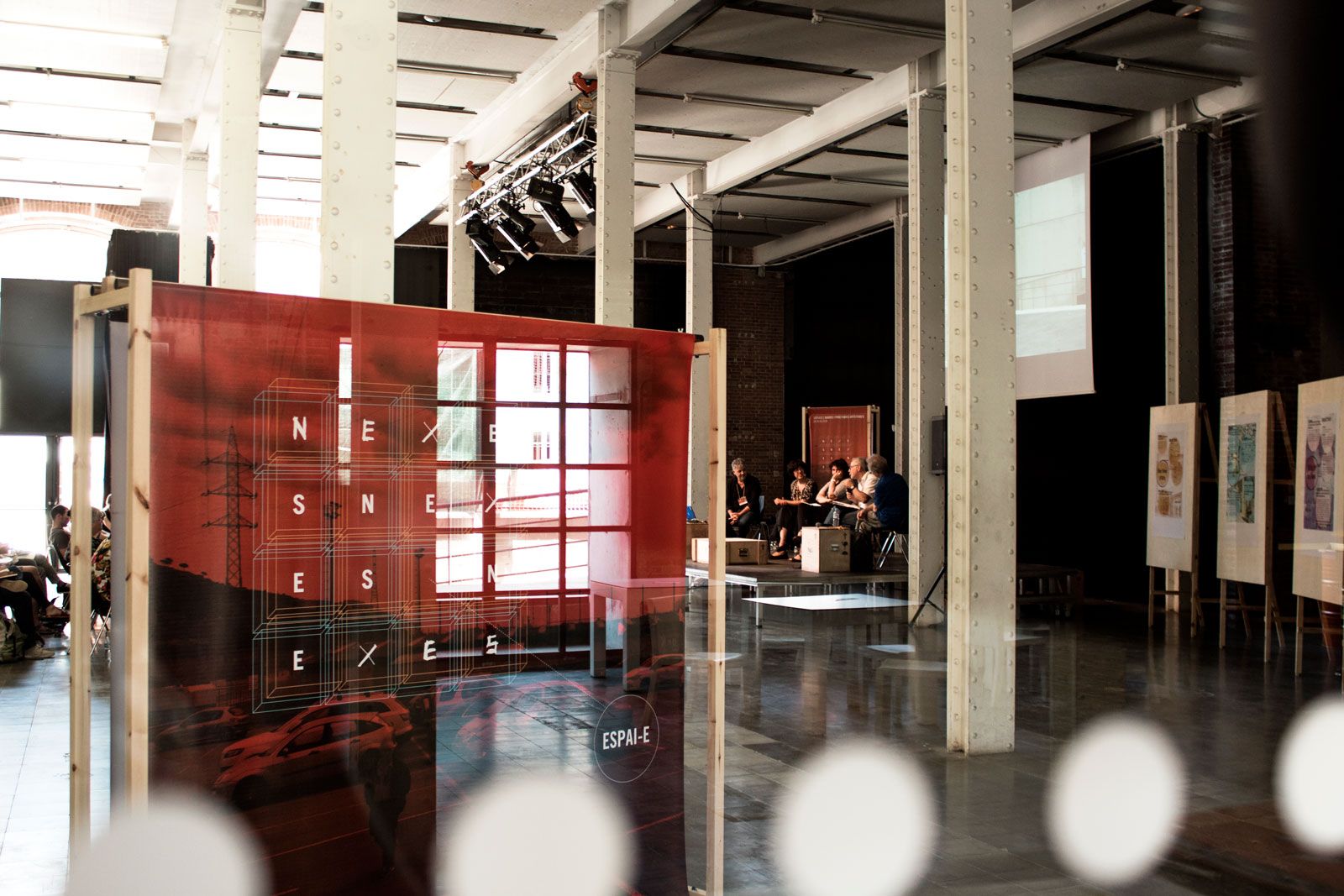 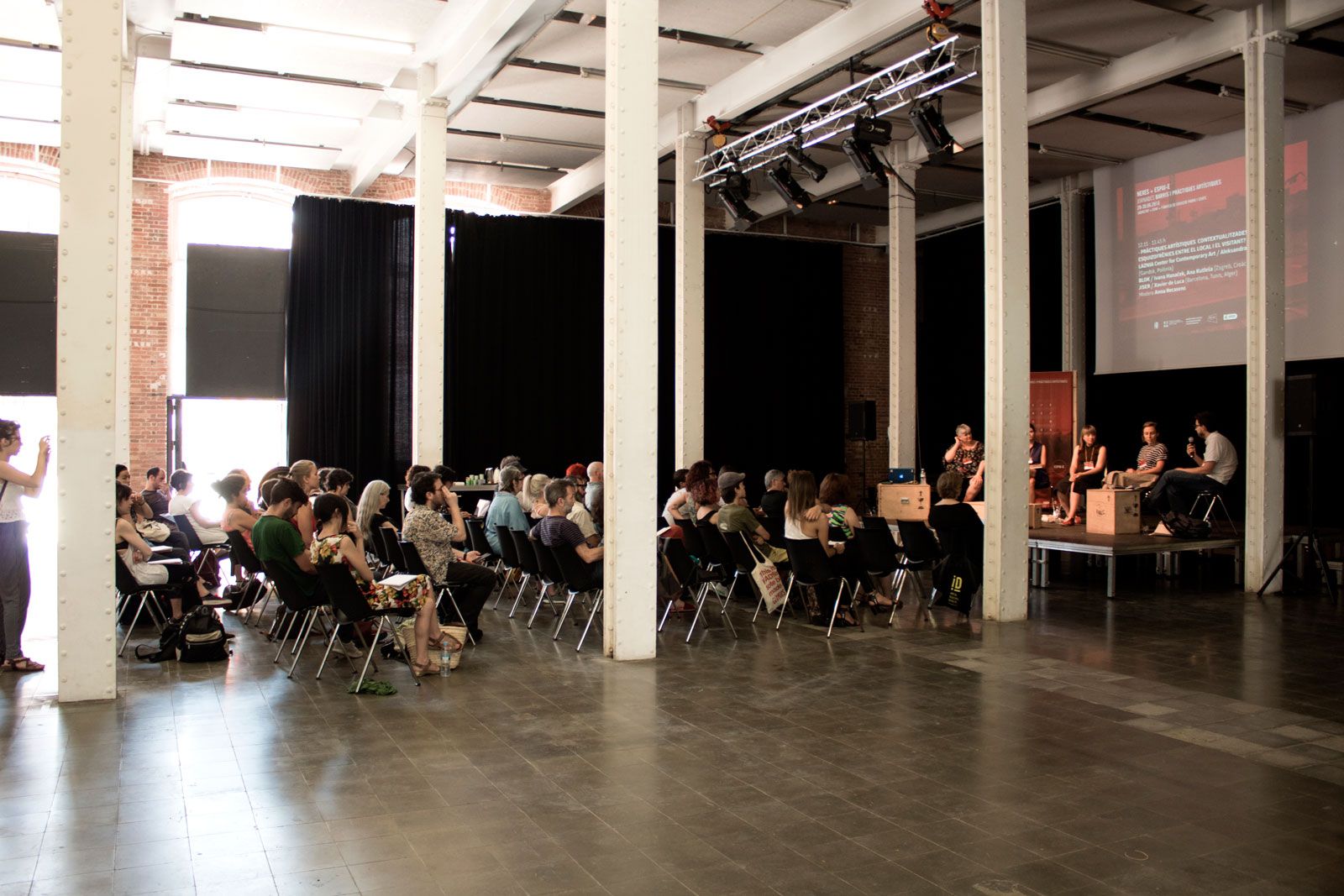 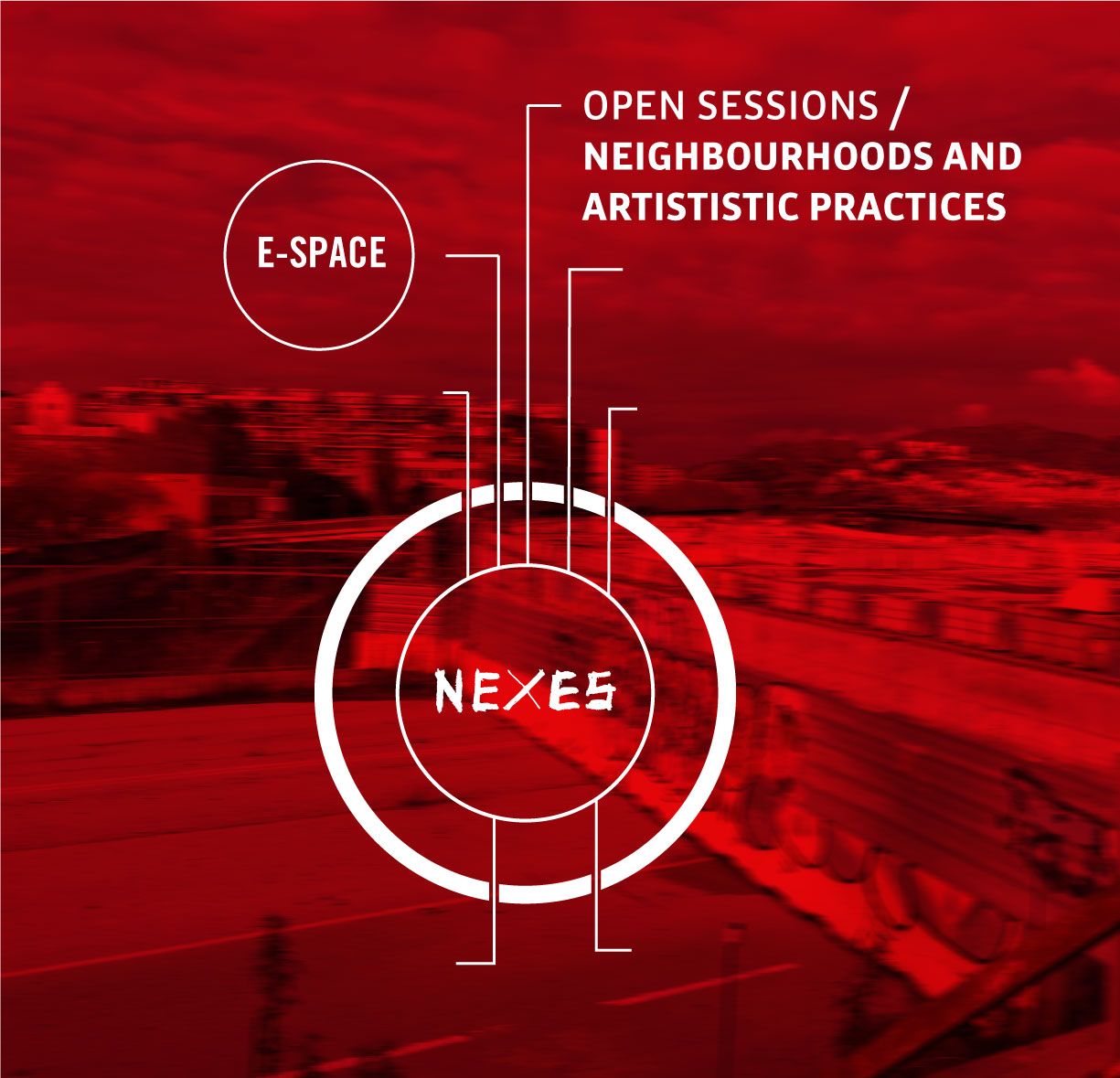 - DISPOSITIVO X. A device for making connections, a mobile element for touring around civic centres, schools, and social spaces, in order to display materials and results from the project, acting also as a tool to motivate and connect agents and actions in specific contexts 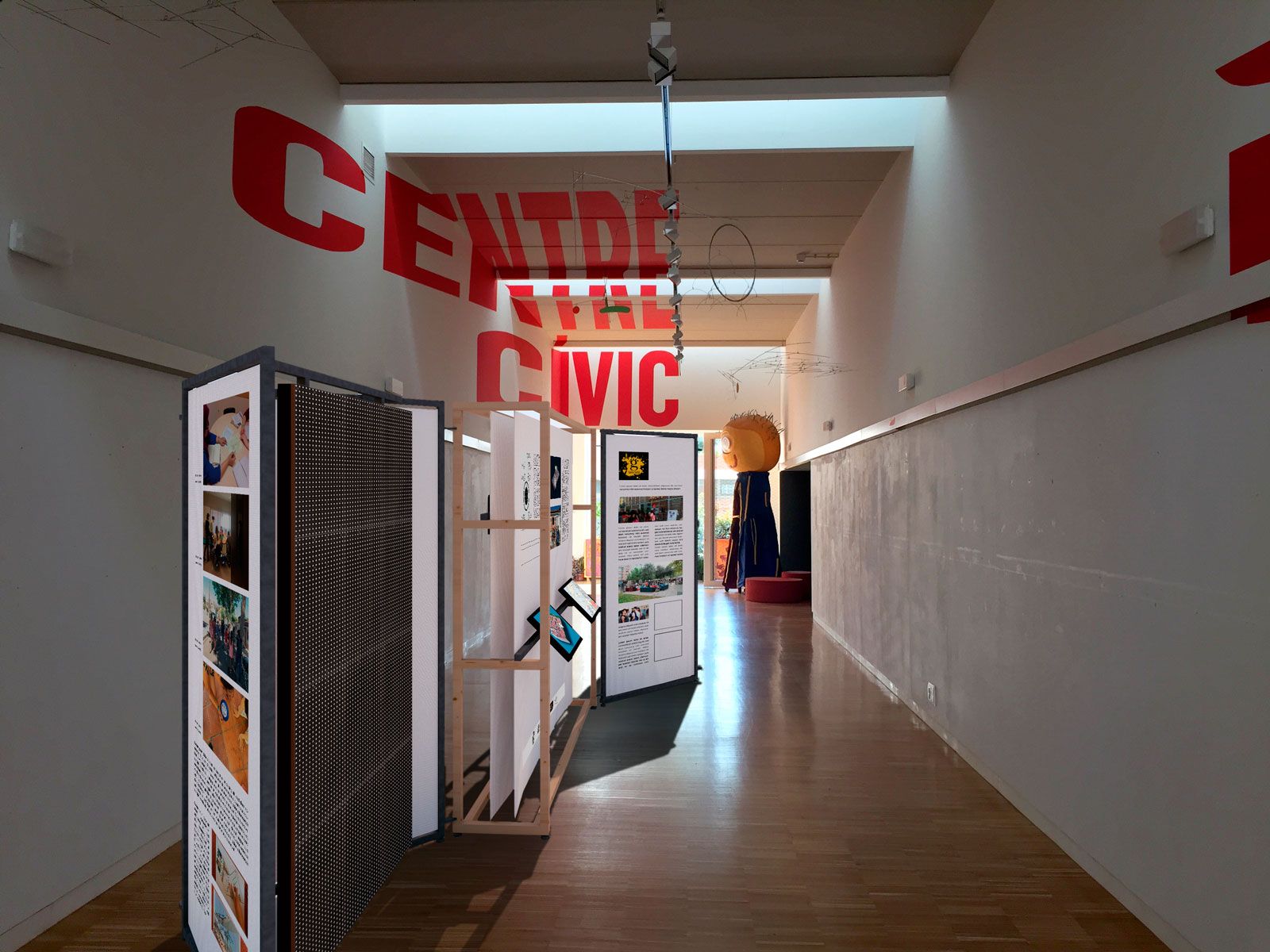 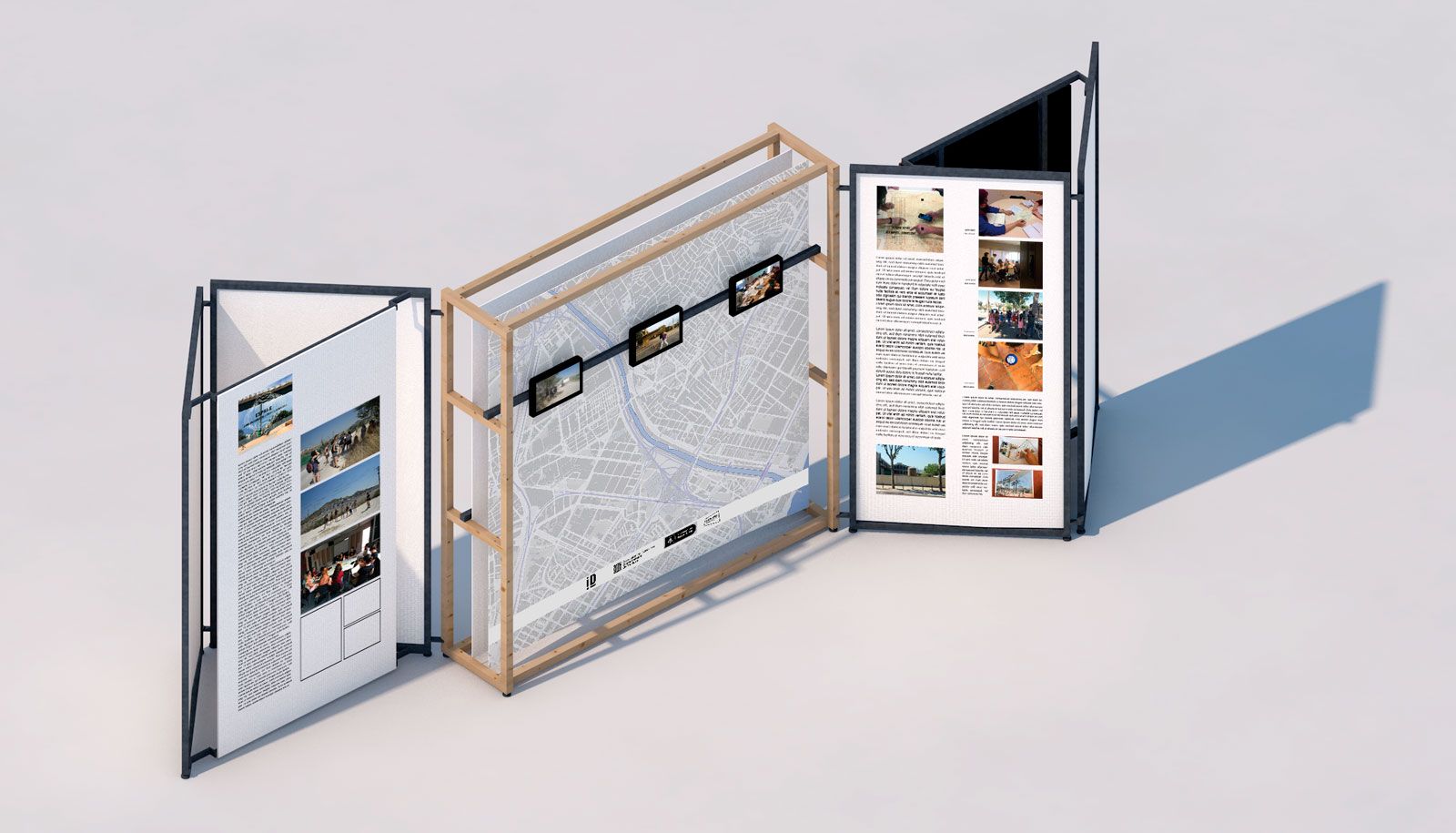 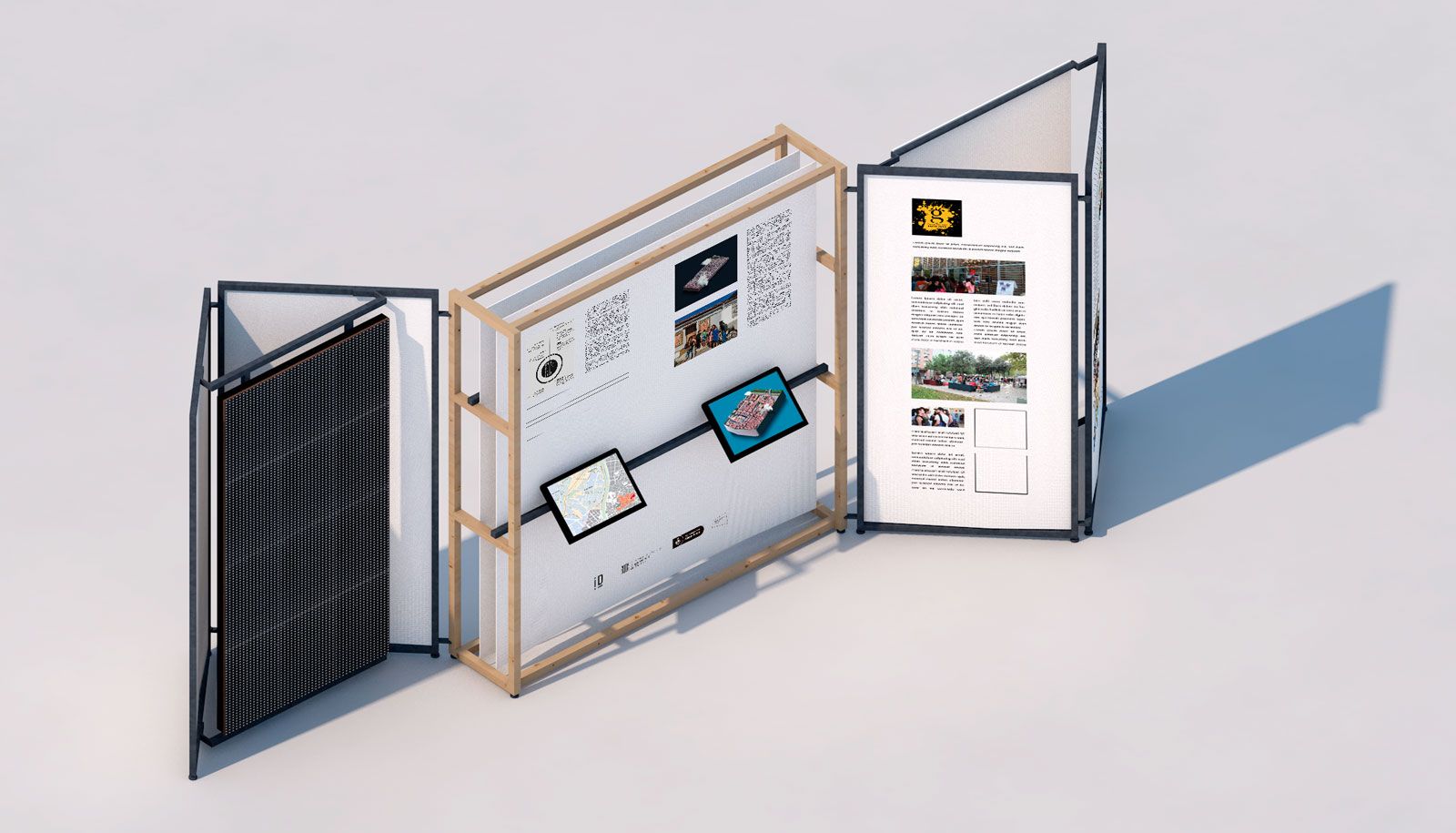 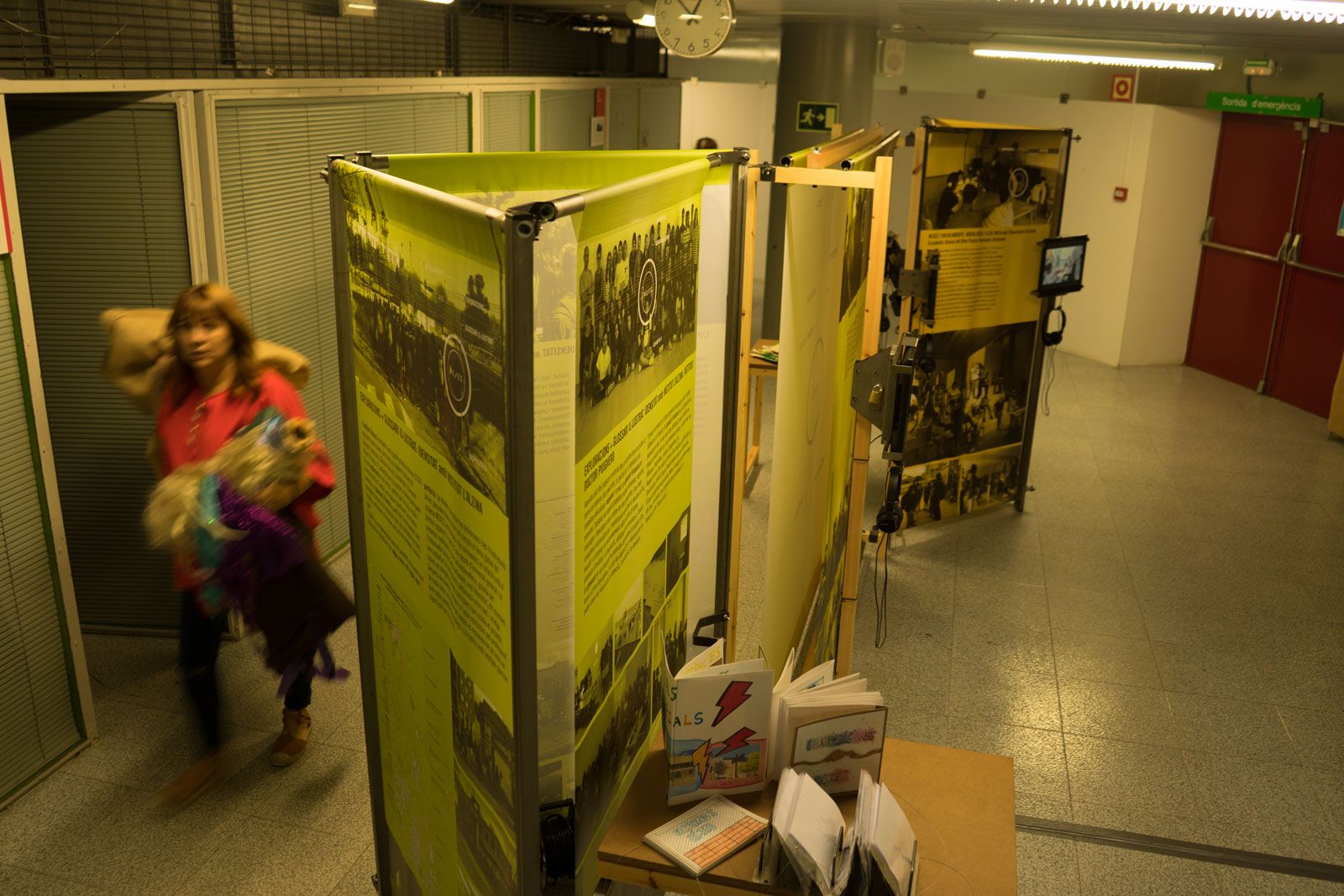 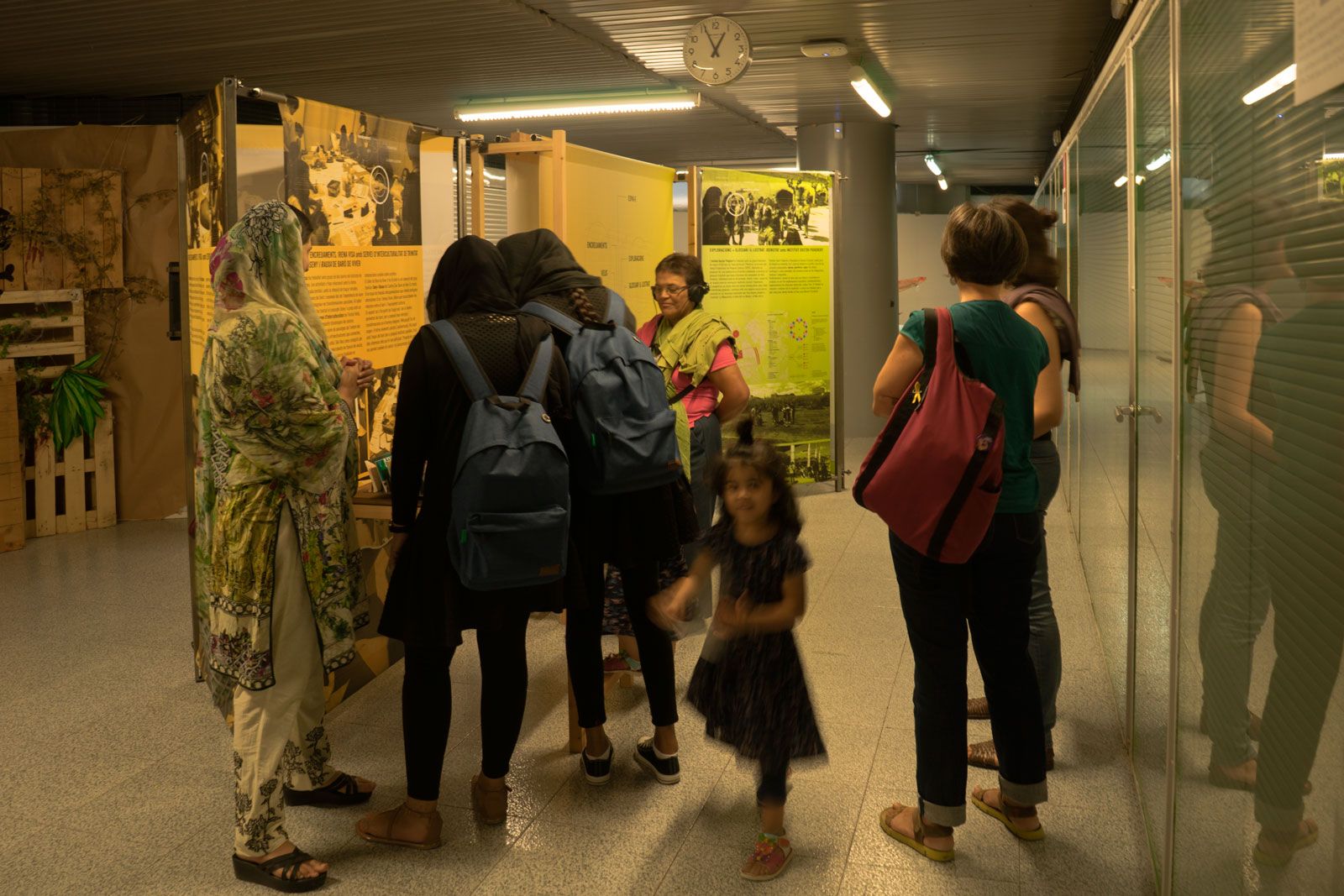 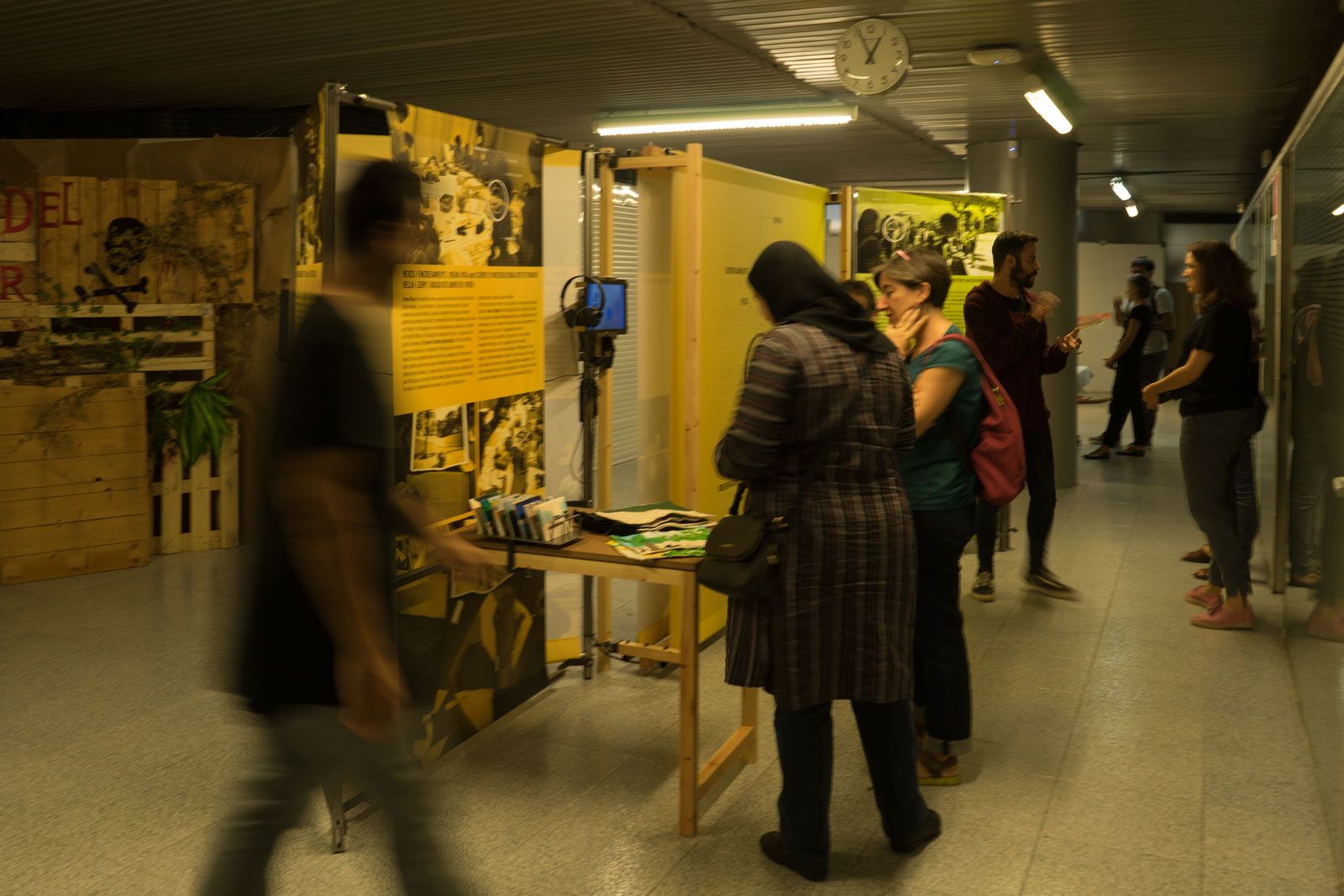 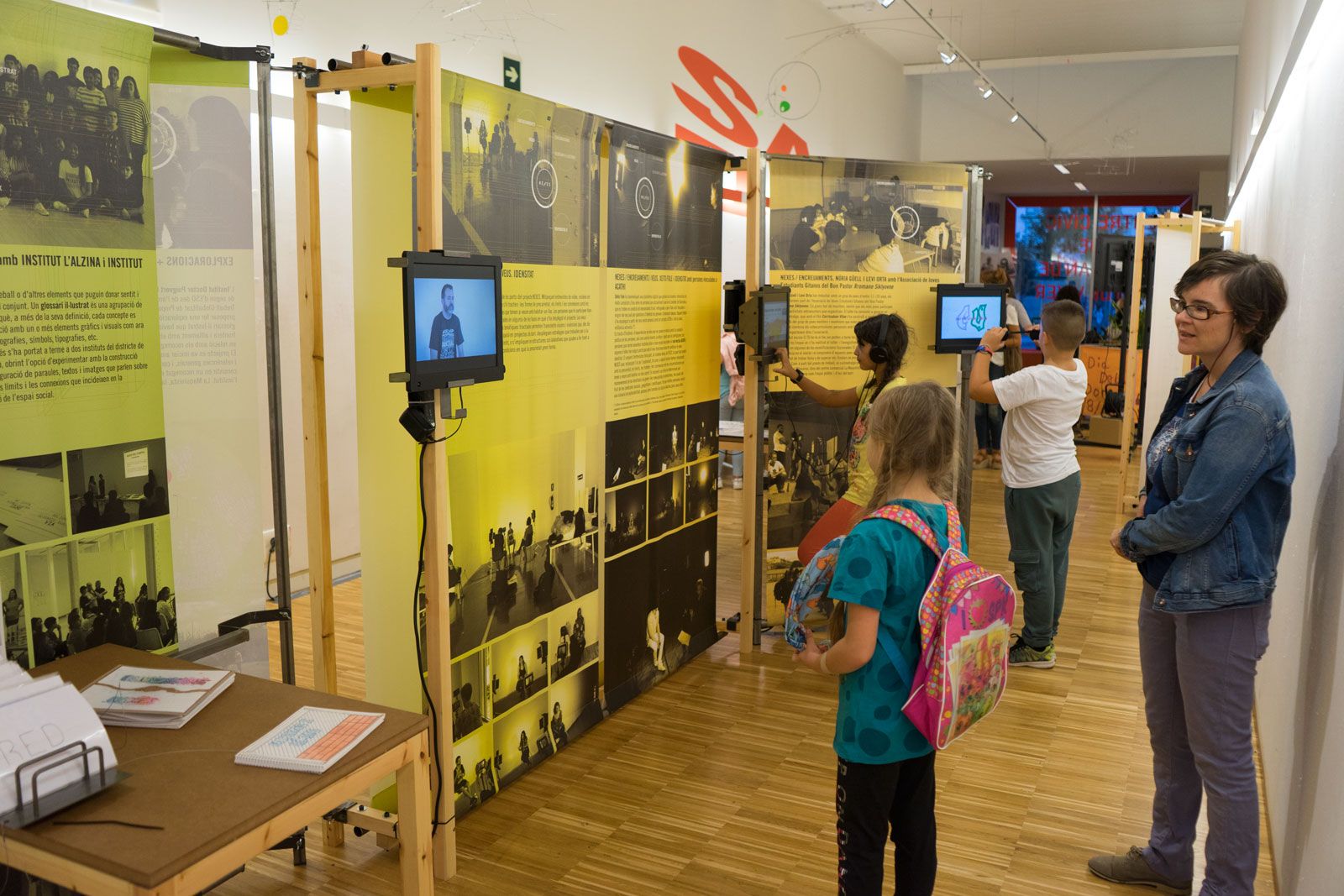 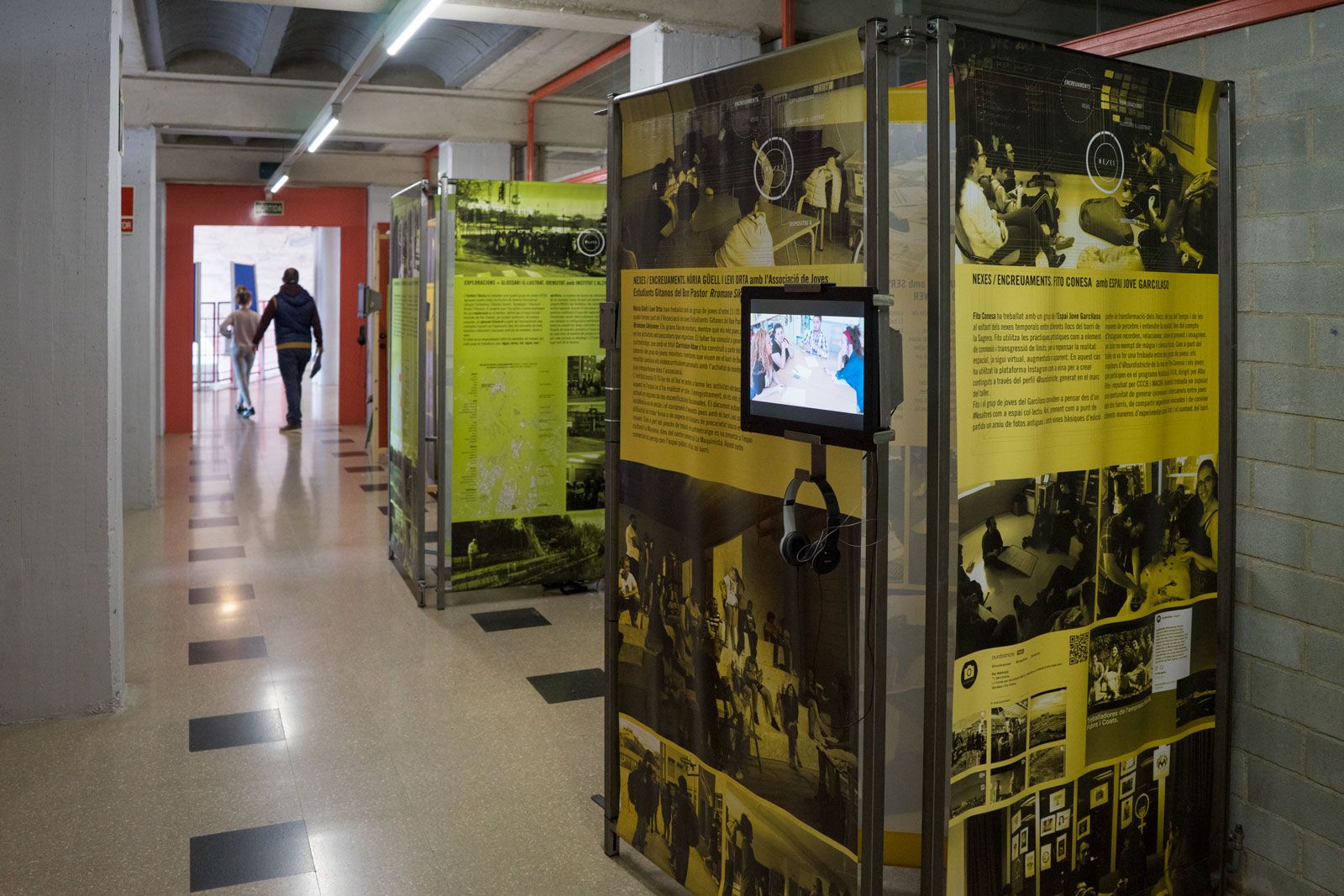 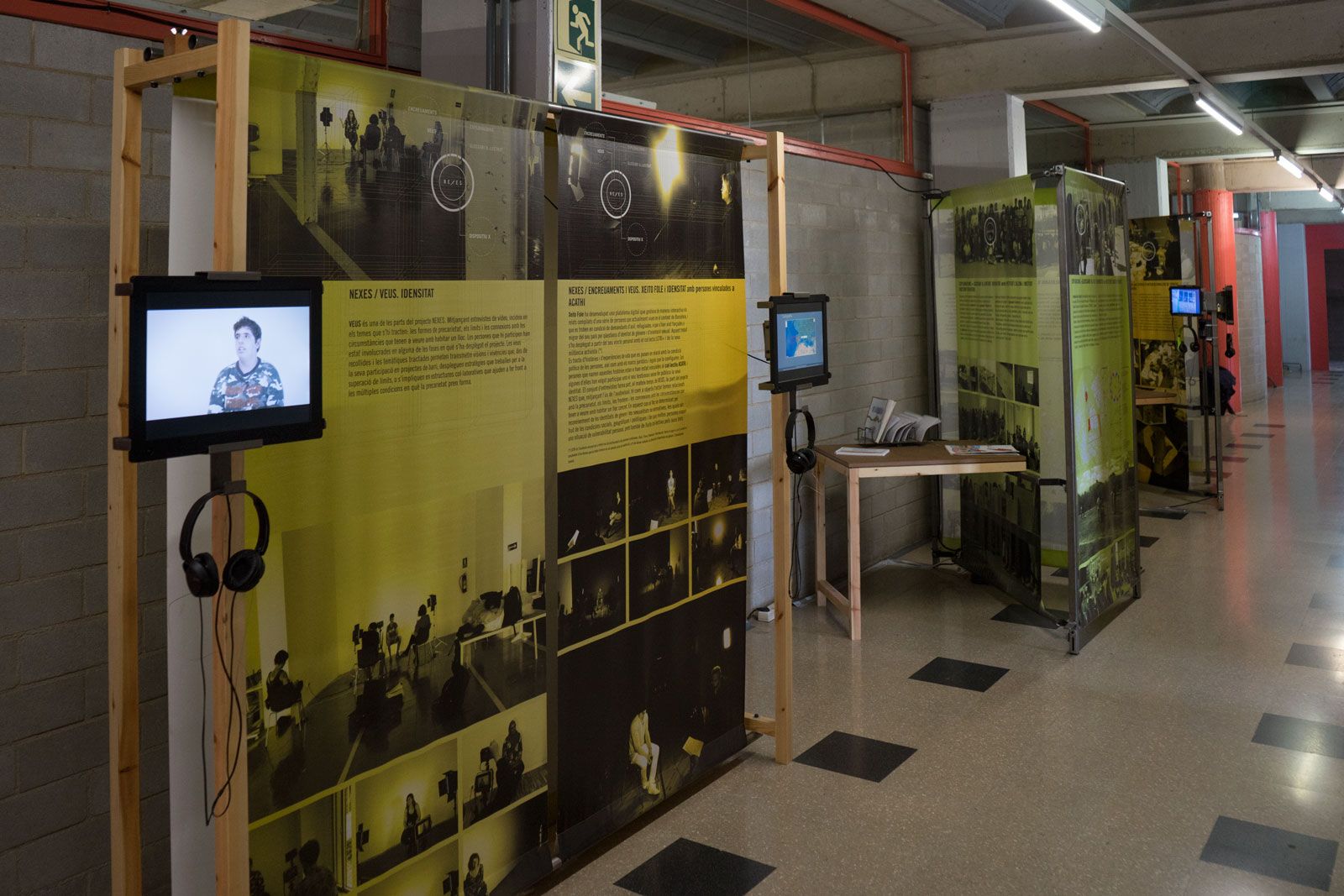 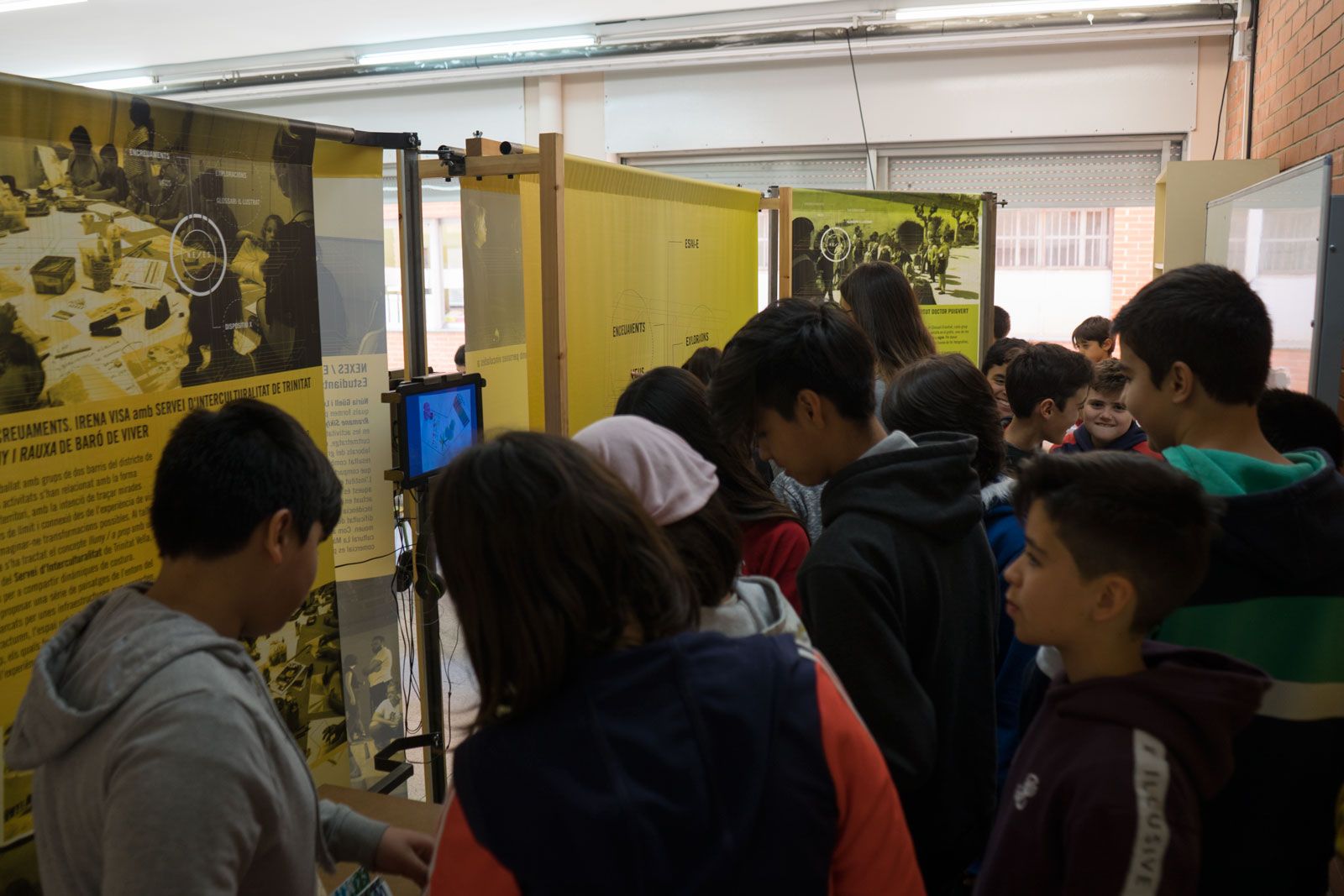 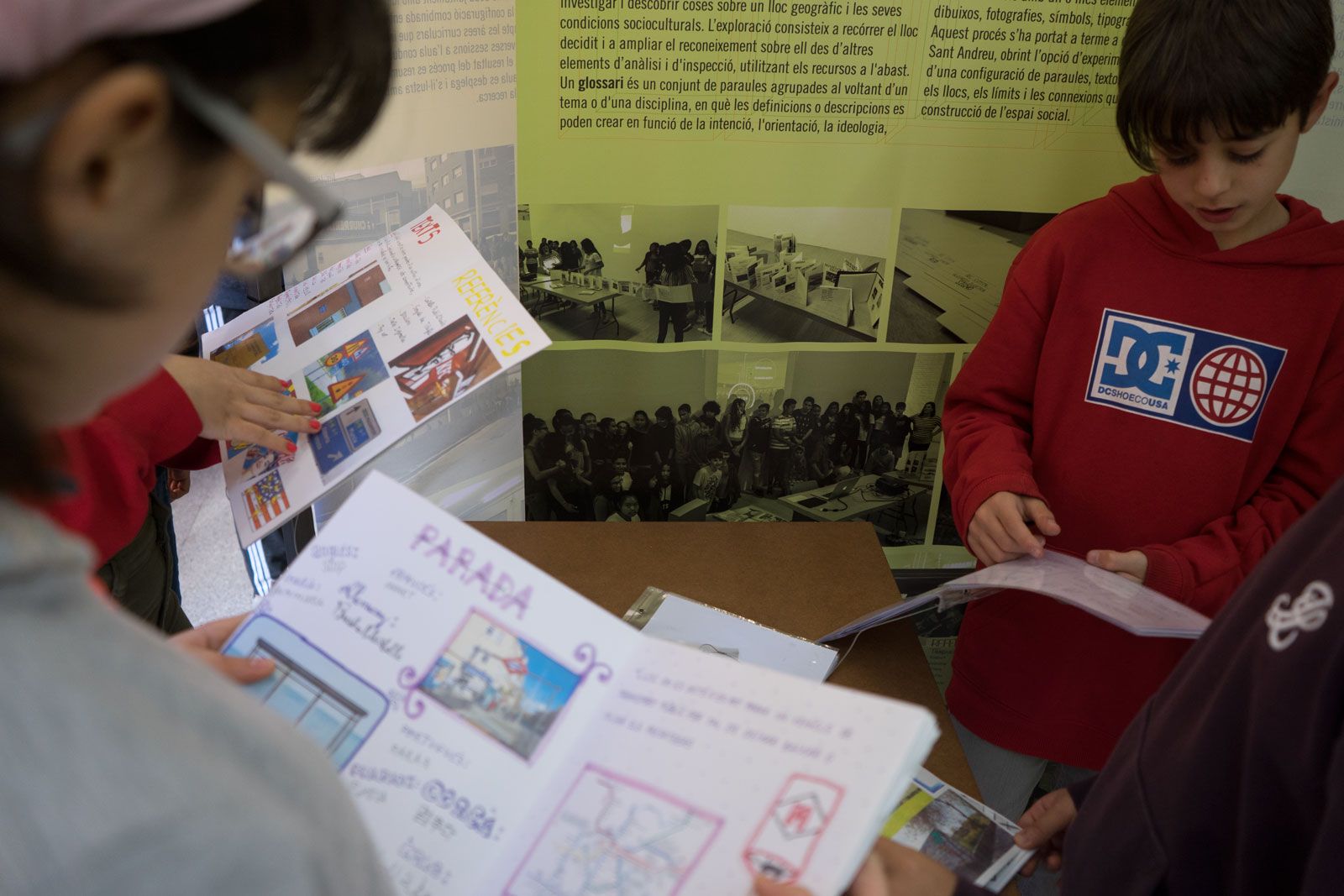 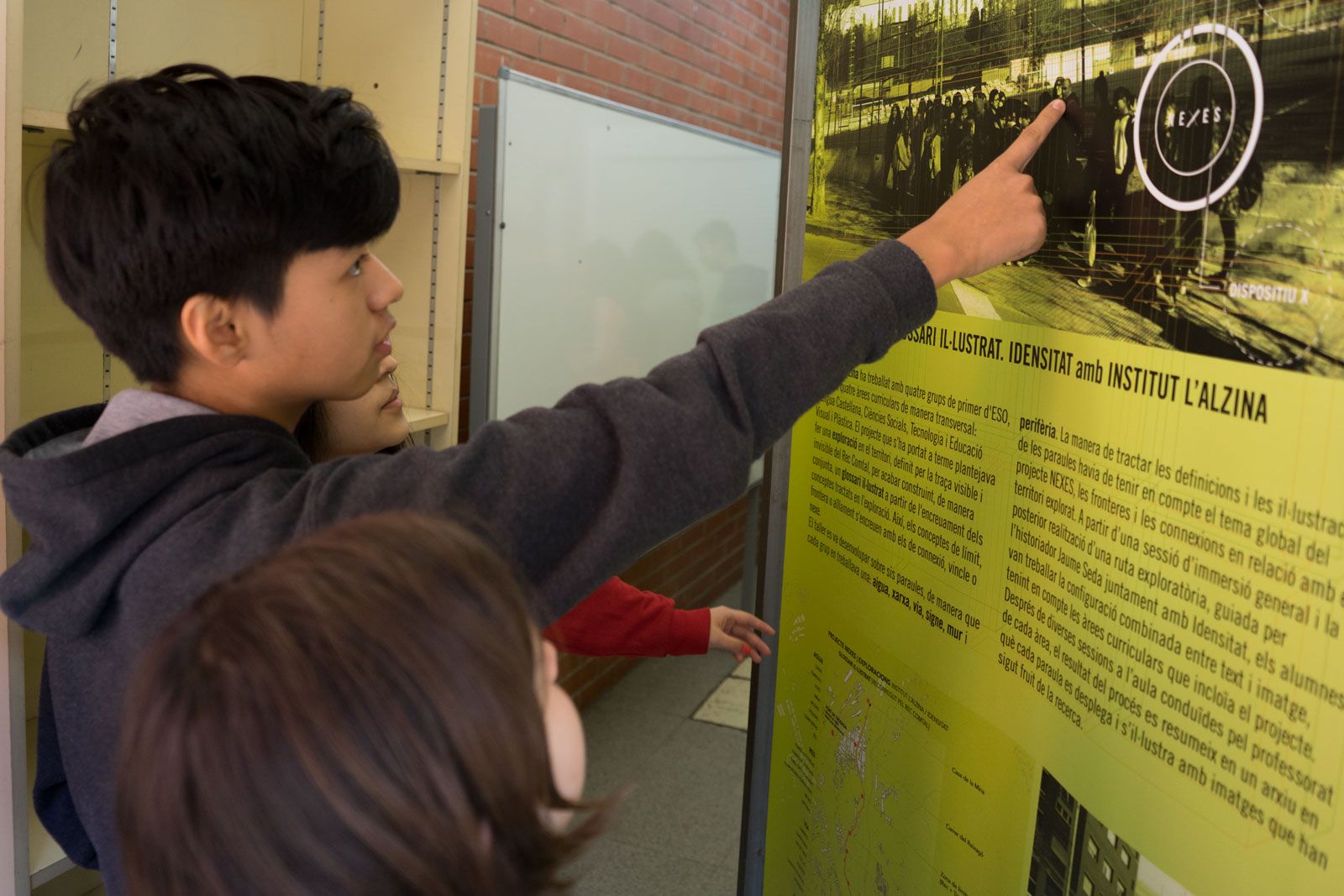 To achieve these actions, IDENSITAT is connecting with local cultural and social agents and active groups in the area to host the invited resident artists at various times during the project, respecting the rhythms of each participating group, while activating contexts of shared creation. The actions of mediation and work in the field are carried out by IDENSITAT, which has extensive experience in organising projects, in working in collaboration with other active agents, and in deploying artistic and educational actions with a secure base in the context in which they are carried out. In this sense, a nucleus of support has been set up for the project called LOCAL OBSERVATORY, which is formed by a group drawn from the membership of local bodies, institutes or projects active in the designated areas of the proposed subjects. 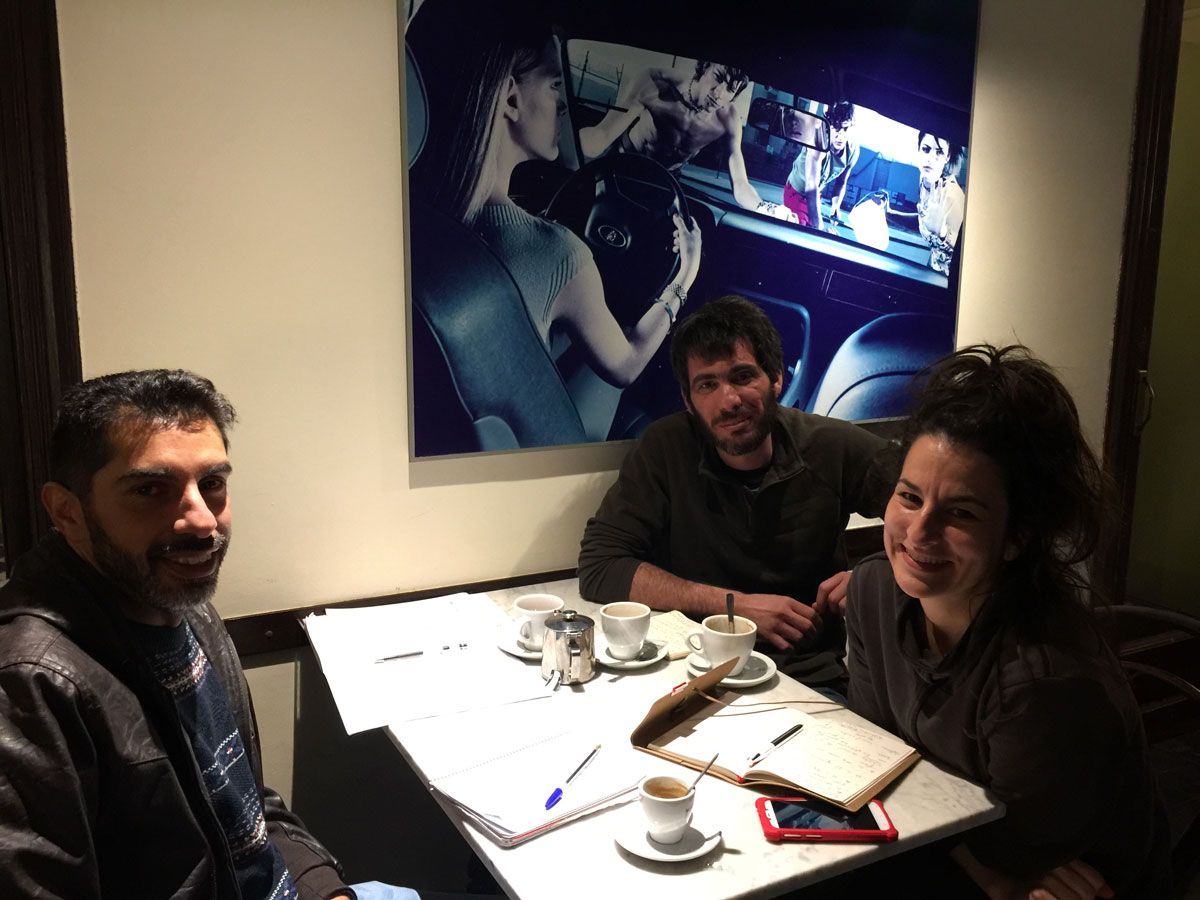 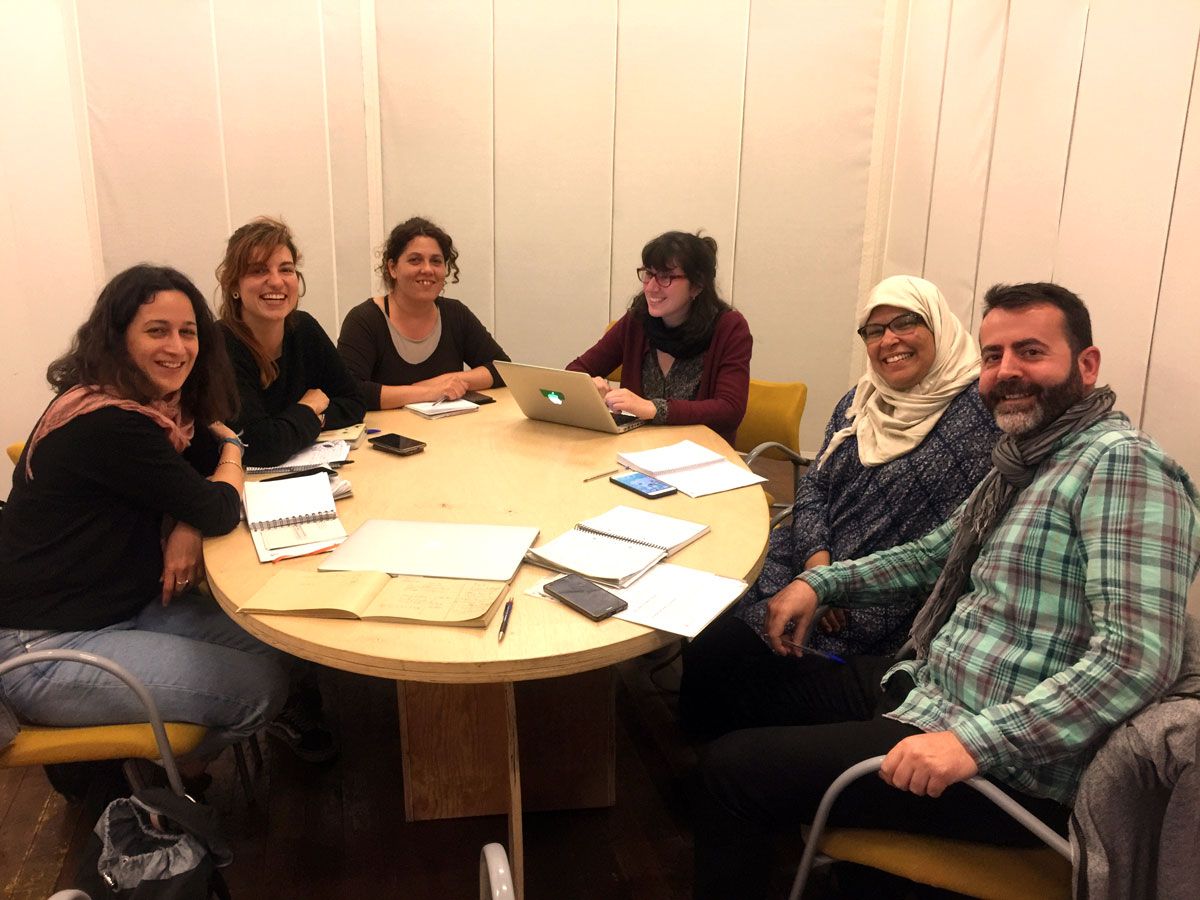 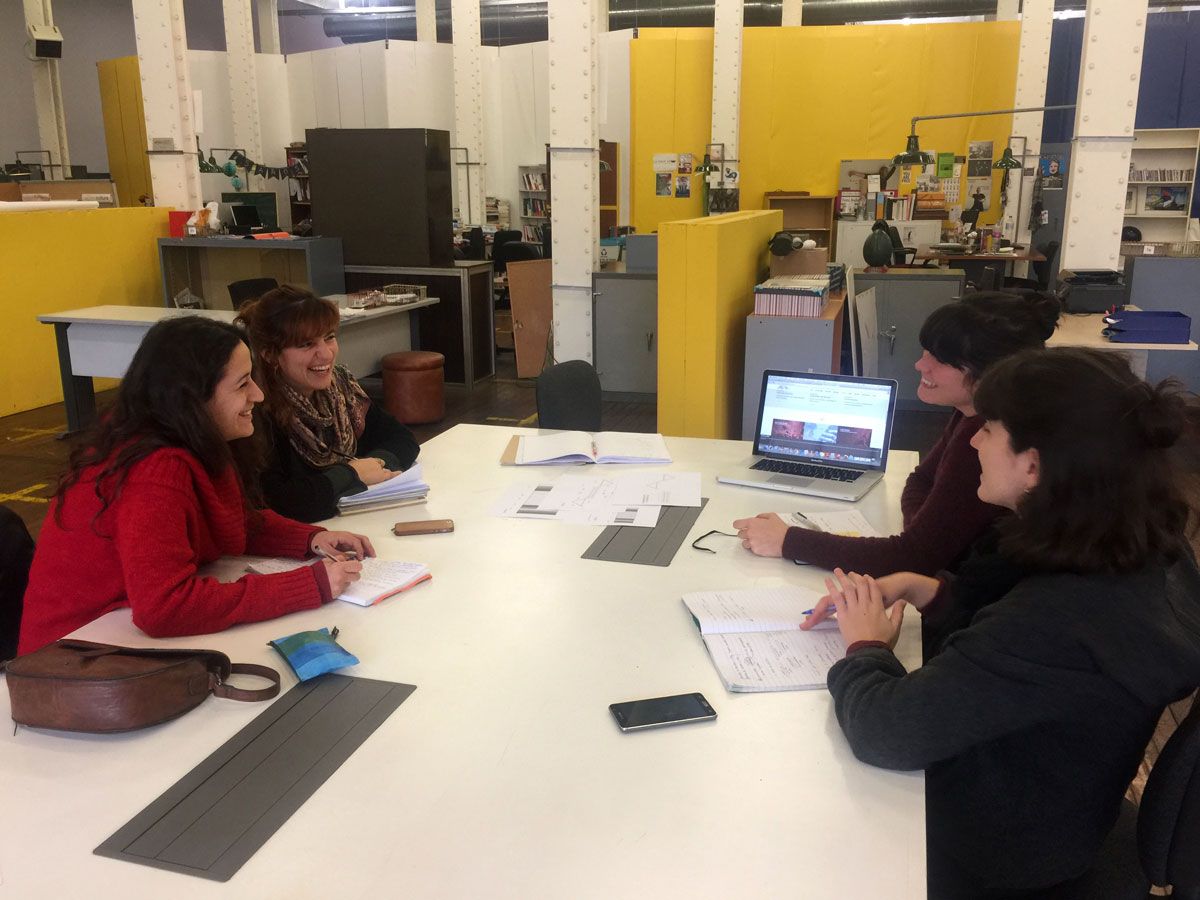 The cultural agents and organisations forming part of the OBSERVATORY are:
Ruben Toro and Marta Serra for Servei de Dinamització Juvenil de Trinitat Vella y Baró de Viver, working in the youth sector, supporting local youth activities in the Trinitat Vella and Baró de Viver neighbourhoods.
Carlota López Rubio and Alejandra López Martín, for Servicio de Convivencia en el Espacio Público, from Sant Andreu District, a team of educators and social workers specialising in community work and public space, carrying out activities and projects to promote coexistence through awareness and alternative conflict management.
Beatriz Liebe, director of Centro Cívico Baró de Viver, an organisation operating as a nexus between neighbours and active cultural projects within the neighbourhood. It is a highly active space in terms of culture and participation, working from constructive and transformational perspectives on aspects which stigmatise the neighbourhood.
Also linked to the OBSERVATORY are those collectives and organisations directly working with the artists in residence : Acathi, Asociación de Jóvenes Estudiantes Gitanos del Buen Pastor "Rromane Siklyovne, a group of young adults from Espai Jove Garcilaso; and the team of teachers from the participating secondary schools L'Alzina and Doctor Puigvert.
In the CROSSINGS stage, the invited artists are Xeito Fole, Núria Güell - Levi Orta and Fito Conesa. Together with Idensitat, they will work with the following groups: Acathi, Asociación de Jóvenes Estudiantes Gitanos del Buen Pastor "Rromane Siklyovne, and a group of young adults from Espai Jove Garcilaso.
Xeito Fole (an artist who focuses on gender issues and transsexualism through the media of technology and video), Núria Güell-Levi Orta (artists working collaboratively upon research, social criticism and experimentation with processes) and Fito Conesa (an artist with a wide experience in working with young people using audiovisual technologies, social networking or collective practices), will bring their experience and perspective to generate content related to concepts such as limits, connections and precariousness , using art as a tool to contribute to a social space which raises new perspectives.

For more information of what has been achieved in the first phase, iD Barrio Besòs, AQUÍ

NEXES is supported by the ART FOR CHANGE 2017 programme of Fundación La Caixa and Fàbrica de Creació Fabra i Coats (Barcelona).