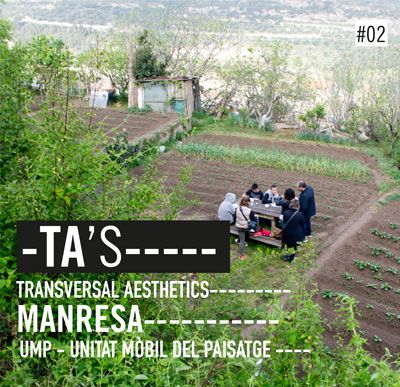 This project promotes artistic practices and educational experiences, based in socially engaged art, in relation to areas of medium-sized towns.

TRANSVERSAL AESTHETICS
Under the name Transversal Aesthetics, Idensitat presents a programme of activities taking place within a specific area  driven from the field of contemporary artistic practice and based on an interdisciplinary approach, connecting art and other spheres of knowledge (architecture, urban planning, design, social education, sociology, anthropology, new technologies, among others).The programme aims to encourage collective action in the construction of public space through educational and artistic practices jointly developed, driving social creativity and encouraging the involvement of various participants at specific phases of the process.
It is intended to initiate and bring continuity to collaborative processes in the relationship between artistic practices, social contexts and educational spaces, and deploying these processes throughout specific locations or environments in which these practices are not habitual, establishing connections between artistic institutions or spaces and social spaces. The concept of expanded audiences encompasses different levels of relationships between users and artistic production, and incorporates the idea of users and individuals engaged and actively participating in building projects. It also includes the training and diversification of audiences which are neither initiated nor specialised, but it emphasises the concept of audience not as mere consumers or spectators, but as active agents.

TRANSVERSAL AESTHETICS combines processes of research, training, production, mediation, awareness-raising and distribution. The proposal is intended as a programme of activities which, taken together, constitutes an attempt to reflect, as a collectivity, upon a cooperative urban development, and upon the role of artistic practices in relation to citizen action networks, during a process of transition towards an urban condition which pursues social justice, innovation based upon creativity, and projects of cooperation.

TRANSVERSAL AESTHETICS becomes a  production project lab driven by creators or artists' collectives which incorporate collaborative methodologies based upon workshops or other devices of critical educational mediation.  The activities, which may be deployed across various different locations, will bring together educational communities, social space and artistic or cultural institutions, generating new connections among contemporary arts, educational communities (teachers and students) and local social agents, also promoting greater social cohesion. The purpose of the proposal is to create relationships between local active agents, and to establish new channels of communication and collaboration between educational communities, and the social practices and institutions.

GOALS
- Promote collaborative practices and devices which operate through mediation and educational activities.
- Work upon the idea of ​​active audiences, involved in the production of knowledge as a mechanism for generating new connections to the contemporary arts.
- Broaden the functions of art to connect with ordinarily unrelated ambits, and establish relationships with them.
- Boost mainstreaming of art to open new avenues of experimentation.
- Connect contemporary artistic practices with projects, organisations and individuals active within local contexts.
- Encourage the creation of spaces or moments of knowledge exchange which individually and collectively empower those who are involved in the project (artists, experts and local agents).
- Encourage the creation and continuation of learning spaces which involve local, creative and educational communities.
- Develop closer bonds linking a specific social context and contemporary artistic practices, promoting a qualitatively better and wider access to culture and an understanding of the contents of the project and the characteristics of the contexts in which it develops.
- Generate spaces or participate in collective action, by providing elements to increase creativity, communication and transformational possibilities.
- Enhance hybridisation, cross-pollination and permeability, combining artistic practices and educational activities.

The projects  CIRCULACIÓ, by Tanit Plana, and RECORDS D’AVINYÓ I RECORDS DEL BRONX, by Nicolás Dumit Estévez, from 2011 and 2012 respectively, were developed as part of Transversal Aestethics.

UNITAT MÒBIL DEL PAISATGE | U.M.P.: LANDSCAPE MOBILE UNIT . Project by MIXITÉ for Manresa
As part of the Creative production project lab , during 2013 and 2015 U.M.P. (the Mobile Landscape Unit) was deployed by the cross-disciplinary collective Mixité (architect Marta Carrasco and artist Sergi Selvas). The project was developed in Manresa (Bages).

The project Unitat Mòbil del Paisatge is the activation of a mobile device which is simultaneously a catalytic mechanism for processes of critical reflection upon the countryside, a generator of community activities, and an archive of documents and materials generated during the collective research. The first phase, the design and construction of the device, was conducted in 2013. Later, based upon collaborative work and by bringing various groups and local agents together, educational processes were started around issues connected to the city and the countryside, heritage and  landscape within the context of Manresa and Bages.
The project was deployed with the collaboration of schools, associations and other local agents who, during 2014 - 2015, worked to generate various processes of critical reflection and to highlight all  information involving a perspective upon the issue of landscape, and the recent transformation of the city and the surrounding countryside.
These processes were developed as workshops in which participants of each group pictured, considered, debated and proposed new interpretations and views of Manresa and its surroundings.
Thus, the project was divided into several phases and activities. During the first phase (2013), the project was developed with the encouragement and involvement of Meandre, a local ecological organisation with deep roots in the region and a wide knowledge of the natural and agricultural environment of the city, supporting a large number of outreach and intervention projects developed over the years. The mobile device was designed, built and presented as a process of dialogue and joint work with Meandre, the device itself a symbol of this relationship.  During the second phase (2014-2015), the project consisted of, on the one hand, meetings between experts and specialist organisations and agencies within the region, and, on the other, specific workshops in collaboration with schools and informal educational organisations.

Roundtables:
two meetings were organised with bodies, collectives and individuals connected to countryside, cultural and patrimonial issues, with these issues being tabled as a starting point from which to deploy various activities within the project's framework. It was proposed that activities, spheres of interest and work-spaces of each participating body should be held in common in order to bring to the fore those points of common interest in terms of methodologies, interests, objectives and spaces of action. The following organisations participated in the these meetings: Centre d’Estudis del Bages, la Fundació Aigües de Manresa – Junta de la Sèquia, l’Institut de Recerca Holística de Montserrat – Irehom, l’Escola Agrària de Manresa, Memòria.cat, Amics del Conservatori, Museu Comarcal de Manresa, Cacis Forn de la Calç, Cal Gras Alberg de Cultura.

Workshops:
With the aim of sponsoring collaborative research around the central themes and issues of the project, a series of educational activities was set up, based upon specific workshops in order to work on different approaches to studying the locality, using different methodologies and spheres of interest.
•     Els sons de la memòria (The Sounds of Memory), in collaboration with pupils from first and second grade of SAMI from L'Esclat music school in Manresa, coordinated by teachers Anna Soler and Andreu Cano. In these sessions, pupils studied the sounds produced by various objects in relation to everyday memory, with the objective of bringing into play the connection between memory and surroundings. Working with boxes of sound, participants and pupils experimented with the sounds of certain objects linked to their personal memories, paying attention to the nuances, in this case sonic, of everyday elements of which they were not usually aware, and which form part of our sonic landscape. Participants: Clara Brunet Aran Ladrón de Guevara, Alba Rodríguez, Eduard Santaularia, Robert Torné, Pau Cardona, Guillem Fonts, Marina Giralt, Roger Gomez, Carlota Llasera, Eric Martí, Pere Navarro, Júlia Quiles, Adrià Salabert, Ignasi Serrat, Joan Servitja, Lluc Vila, Núria Barés
•     Paisatge sonor (Sonic Landscape), in collaboration with pupils studying musical composition at L'Esclat music school, coordinated by teachers Cristina Zafra and Pep Torras. On this occasion, based upon a video recording, participants and pupils composed and played their soundtrack of their surroundings, using their research and sound-constructions made with everyday objects.  Participants: Maria Casas, Marcel Compte, Carla López, Míriam Martínez, Eric Roy, Arnau Izquierdo, Laia López, Maria Rovira.
•     Aixopluc. Una construcció col·lectiva (Shelter. A collective construction), in collaboration with pupils from the Aula Oberta de l’Institut de Cal Gravat (with teachers Ramon Barlam and Lídia Biescas). During the workshop sessions, the value and the necessity of architecture in its most basic function were considered, bringing into play the idea of architecture with regard to self-building, recycling and sustainable creation, as well as an understanding of the precarious and ephemeral value of specific constructions in the context of living and working in the countryside. This workshop considered what we think constitutes architecture, and also brought these issues into the debate regarding what constitutes an architectural and local patrimony.
The process of constructing the shelter took place over two weeks in the cloister of the Manresa County Museum, testing, at the same time, new ways of locating the museum on the cusp between the institutional and the social-spatial. Participants: Miriam Burbano, Judith Hernández, Edgar Martínez, Aaron Molina, Aleix Rodríguez, Aaron Ruiz
•       Ciutats (Cities),  in collaboration with arts group El Garbuix, led by artist Eva Soto, who, based on archive research at the Museu Comarcal,  explored the history of Manresa through paintings, drawings and prints in the Museum collection, and considered the contemporary city and the image that represents and defines it. Participants: Roser Cruz, Roser Mas, Fina Bonbehí, Fina Farrés, Alba Comas, Montse Forradelles, Lourdes Guàrdia, Maribel Botella, Lluïsa Cruz, Núria Lega, Assumpta Pla, Àngels Bertran, Esther Ferrer, Maria Suñé.

Mutations Workshop:
Permanent laboratory of analysis of the territory
Days 12th, 19th and 26th September
Time: 5 pm to 8 pm
Place: Sala Gran. Museu Comarcal de Manresa
The construction of a scale model of Manresa represents an attempt to learn how to read the town and its surroundings transversally, so arriving at the understanding that their formation involved many more elements than those built through human construction, highlighting the fundamental role played by the the natural elements in the environment.
There will be activities parallel to the exhibition so visitors may learn how to read and interpret historical urban and territorial maps, in order to diagnose and identify those elements which were, and which remain, crucial in the formation of the city.