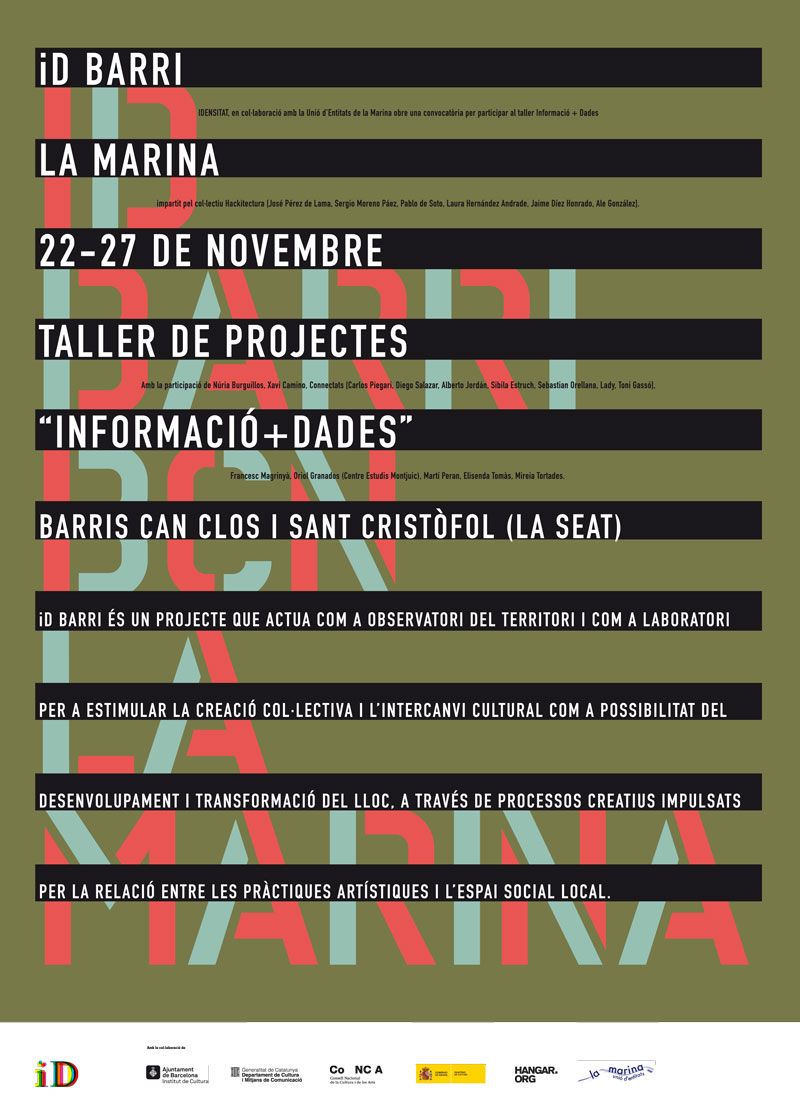 iD Barrio is a project which became a territorial observatory and a laboratory for the development of creative processes  connected with social and local action. Activities connected to microcontexts which form part of contemporary urban concentrations. ID District was created with the intention of stimulating collective creativity and cultural exchange, as well as to develop and transform the landscape of a district through creative processes fuelled by the relationship between artistic practice and local social space . To analyse in order to understand the dynamics of space, to visualise in order to interpret the various connections operating within specific places, to project in order to design new productive dynamics, to collaborate in order to enhance and multiply creative abilities.
ID Barri is a project to integrate artistic processes within other social processes, to bring closer together transdisciplinarity, social participation, and those cracks which allow us to create, by means of collective methodologies, new references in those environs in which IDBarri performs.


The workshop proposal included exploring territory, critical cartography, data visualiation, information processing and collective creation, as well as finding narratives related to local history and locating data related to the place. It focused on two areas of La Marina-Zona Franca, close to each other but significantly different in their urban, historical, and social context, and in their use of public space. The methodology consisted of carrying out an intensive fieldwork throughout the area, during which several individuals and local bodies participated and provided references and data to learn more about the locale. The purpose of the workshop was to work with oral and visual stories and data, in order to devise tools of representation and visualisation, and to carry out specific actions. Participants developed their proposals through a tutorial led by Hackitectura, with the support of the Idensitat team and contributions from all participants.

Objectives
- To link up different urban spaces by creating temporary circuits and practices of urban appropriation and visualisation.
- To promote the development of creative projects working with local actions in the specific context of Can Clos and SEAT.
- To generate proposals and to visualise data based on the direct contact with the districts.
- To create an archive of projects with the proposals, and to facilitate the development of some of these projects in the territory.

Directors of the workshop
Hackitectura. Hackitectura. Collective of architects, artists, computer scientists and activists, dedicated to the research and visualisation of emerging territories between physical spaces and social and communication dynamics of the net. Founded by Pablo de Soto, Sergio Moreno and José Pérez de Lama, the collective collaborates regularly with other groups and projects dedicated to the exploration of emerging political, social, economical and cultural mappings in particular geographical areas, in order to intervene through the creation of new architectures of communication.

Pablo de Soto. Architect, researcher and manufacturer of prototypes in the fields of media-architecture and social cybernetics. Coauthor of the critical mapping of the Straits of Gibraltar (2004). Coeditor of the book Fadaiat: libertad de movimiento, libertad de conocimiento (2006), creator of Geografías Emergentes for the second edition of Technology, creativity and Society in Extremadura. LAB_Cyberspacios (2007) and LAB_JovenExperimenta (2008) awards by LABoral Centro de Arte y Creación Industrial in Gijón. Co-director of the mapping workshop Cartografiando Gaza for the winter workshop of the School of Architecture at Alicante. Founder of the Cartografiaciudadana.net platform. Editor of the book Situation Room: diseñando un prototipo de sala de situación ciudadana (2010).

Jaime Díez Honrado. Architect and activist. With experience in activism, design, production and management of social processes through technology, relational and artistic processes. Through technologies and open source practices, he integrates the concepts of identity, heritage and urbanism in his work. He has worked on social creativity and collaborative practices through projects such as Larache se Mueve (2006-2008), robinsonesurbanos.org (2007-2010) or Mapeándonos.net (2009 -).

Ale González. Architect. His work focuses on the dynamics of social, cultural and environmental interventions, and on the creative possibilities of open source technologies. He works with the Arquitectura y Compromiso Social NGO, where he has participated in projects focused on urban issues and participatory rehabilitation projects of districts in Camino Viejo and Romares (Sevilla); Plan de Rehabilitación Integral de Barrios in the districts of La Lagunilla and Puerta in Madrid (Andújar, Jaén), research on territorial changes due to migration dynamics (Sevilla), and the Caja de Herramientas platform to promote open source architectural practices focusing on areas of autonomy (2008-present). He works with processing in the field of data visualisation.

Núria Burguillos. BA in Geography and History from the University of Barcelona, she is an employee of the Municipality of Barcelona since 1986 and is currently an Art and History officer. Leader of the project for promotion and dissemination of the Municipal Archives and the libraries of the Sants-Montjüic District between 1992-2005 and Archivist of the Sants-Montjüic District between 1998-2009. In addition, between 1992-2009, she has led workshops on Historical Fiction (oral and written), coordinated the L'Arxiu i les Escoles campaign, designed historical itineraries, directed publications about the history of the Sants-Montjüic Disctrict, and participated in conferences about History and Archives, representing the Municipality of Barcelona. She is in charge of the Archives and Records Management of Prevention, Security and Mobility department.

Xavi Camino. Anthropologist. BA in Social and Cultural Anthropology from the University of Barcelona (2002). Diploma in Advanced Studies PhD program Urban Anthropology and social movements from the Universitat Rovira i Virgili (2005). He is currently Professor of Anthropology at the School of Elisava. Has a fellowship from l'Agència de Gestió d'Ajuts Universitaris i de Recerca and is a member of the Laboratori d’Investigació Social team of the Institut Nacional d’Educació Física of Catalunya in Barcelona. His research interests have focused since 2000 on the processes of appropriation and informal uses of public space through sport.

Oriol Granados. Historian, BA in Philosophy and Literature with emphasis on Ancient History. Professor at the Institut Egara inTerrassa, director of the archaeological service of Barcelona and Director of the Museu d'Història de la Ciutat. He has studied the ancient settlement and urbanism in the city of Barcelona and the Baix Llobregat. Member of Centre d'Estudis de Montjuïc, his work focuses on the documentation, study and dissemination of the value of this mountain and its environment. Among other topics, he studied the transformation of territory and property in the Marina de Port, the old area of the Port castell. He is currently working on data collection, oral information and reminiscences regarding the districts that of La Marina, which has formed part of the programme of Parlem dels barris de la Marina.

Francesc Magrinyà. Civil Engineer (Roads, Canals and Ports) (UPC, 1988) and PhD in City Planning from the Ecole Nationale des Ponts Chaussées of Paris I (ENPC, 2002). Professor of Urban Planning at ETSECCPB-UPC and Master of Urbanisme i Sostenibilitat at the UPC. He was coordinator of the Mostra Cerdà and curator of the exhibition Cerdà. 150 anys de modernitat. He specialises in the field of interaction between urban planning, transport and environment, and urban services in developing countries. He is the author of the following publications, among others: La evolución de la ingeniería en la urbanística (Ediciones UPC, 2002), Construcció de ciutat i xarxes d’infraestructures (Ediciones UPC, 2004); L’espai urbà de la mobilitat (Ediciones UPC, 2007); Cerdà, 150 anys de modernitat (Ed Actar, 2010).

Mireia Tortadès i Verdaguer. BA in Political Science and Administration from the University Pompeu Fabra, specialising in conflict management from the Cultura de Pau Postgraduate at the Autonomous University of Barcelona. Subsequently she was introduced into the world of mediation with the Graduate Program of Gestió de Conflictes d’Avui, at the Fundació Pere Tarrés. Work experience in conflict mediation, and activism in schools, she currently is a facilitator in the neighbourhood of Can Clos.

The first edition of the project ID Barri was held in Barcelona and Calaf, which allowed for work on the subject of the district, using the context of small and medium urban developments in rural areas, and in relation to the capital.

The first edition of iD Barrio Barcelona took place in La Capella and consisted of an international seminar which brought an exchange of experiences, projects and studies, as well as a will to introduce changes within the institutions, politics and dynamics which affect those parts of the city which we call districts. 200 people from different parts of Spain participated in the seminar, with the attendance of 32 lecturers from different countries, who, with individual or collective presentations, proposed working mechanisms in the districts. Different ideas, originating from the arts, architecture, social dinamization, anthropology or activism, intertwined.

Two workshops were carried out by the collectives KUNSTrePUBLIK and Traces of Autism which worked in different districts of Barcelona, developing specific proposals which focused on the relationship between the exploration of territory and analysis of space, and sociocultural activism and participation. (For more information: http://idensitat.net). (For more information: http://idensitat.net).

For the first time a new edition of ID Barri was carried out in October 2010 in São Paulo [iD Bairro SP] working in the districts of Santo Amaro and Bom Retiro, one peripheral and another central district, with a notable component of confluence of cultures.

IDENSITAT is an arts project investigating ways of impacting upon the public sphere through creative proposals related to place and territory in their spatial, temporal and social dimensions. Since its beginning in 1999, IDENSITAT has been in continuous transformation to become a complex system, incorporating other projects, actions or interventions, promoting processes, organising exhibitions, publishing..., altogether deploying a variety of creative strategies to realise an activity or set of activities. A system based on collaborative dynamics in order to build a relationship between contemporary artistic practices and social space, through research, production, education in a particular context, and distribution throughout a wider context. Under the rubric of, "to experiment with a location to transform artistic practices, and to experiment with artistic practices  to transform the location", IDENSITAT highlights the active role which art plays in social context.