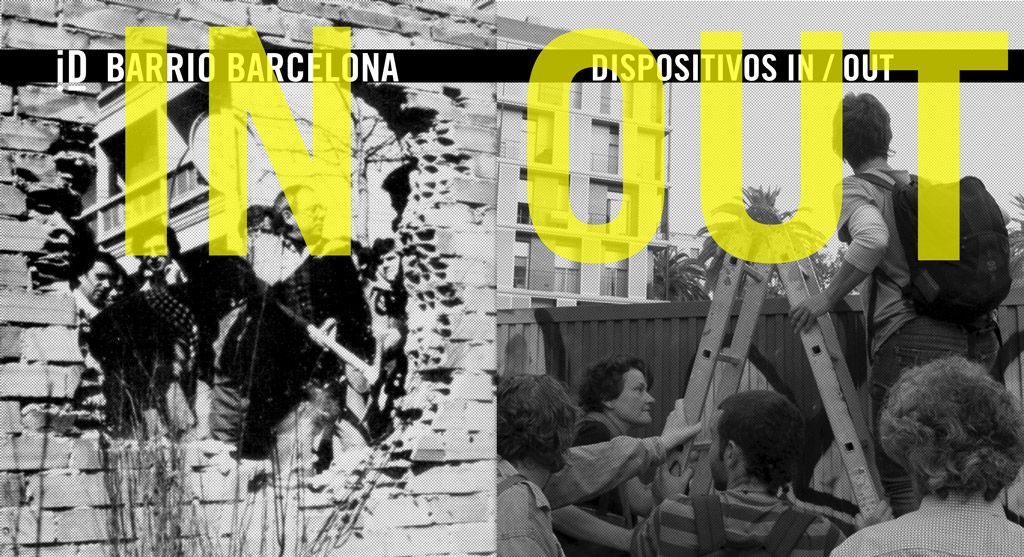 DEVICES IN / OUT
Workshop at the vacant site of "Germanetes" in the "Left Eixample" district of Barcelona.

IDENSITAT iD Barrio BCN,in collaboration with students of the Master's Degree in Design, Art and Public Space at ELISAVA, and within the framework proposed by the group RECREANT CRUÏLLES (Recreating Crossroads), organised the workshop Devices In / Out, taught by the collective MAKEA, and with the participation of members of Recreant Cruïlles. The workshop will focus on the vacant space of the GERMANETES site, located in the Left Eixample district of Barcelona.


>Go to the video

Workshop Description
The workshop was proposed as an exercise in creativity, designed to create a space for meeting, negotiation, training and exchange among members. The workshop had a dual focus, on the one hand, to construct mobile devices in order to raise awareness of the demands of the collective Recreant Cruïlles, working for the reappropriation of the Germanetes site, while on the other, to initiate temporary interventions in public space. The location of the site and the specific features of the Left Eixample district were essential elements to the workshop. The workshop was eminently practical, orientated towards designing and constructing devices for intervention in public space, but also included sessions on the specific context, and other areas with similar characteristics within Barcelona (Can Batlló and Vallcarca). Devices built in the workshop were used in order to convey the demands of Recreant Cruïlles programme, or to were used to publicise new proposals for the site.

Objectives
- To connect with spaces in the city, and to promote practices of information, appropriation and display among the civic networks working to improve public space.
- To enable the development of creative projects linked to local actions.
- To promote proposals to publicise the experiences and actions undertaken in relation to the  the specific site of the Germanetes .
- To construct devices for display and activity, in order to accommodate specific needs and project them in the most general sense
- To build the devices using recycled material .
- To become a tool for activism within the district, and to connect with parties outside interested in active participation in the construction of urban space.

The Germanetes site
The location of the former convent of the Germanetes dels pobres [Little Sisters of the Poor], located at the junction of the streets Comte Borrell and Consell de Cent, is now an empty site belonging to the Barcelona City Council. This has been the situation since 2006, when the land was purchased by the city with the intention, later reflected in the District Action Plan 2007-2011, of housing a whole range of public facilities necessary for the district, facilities which residents had demanded for a long time. Due to a combination of factors, these facilities were not built, and the site remains empty, apart from a few new builds of private housing.
Moreover, this space is located at the confluence of two streets which for years have been a subject of demands by a number of AMPAs [Parents' Associations from local schools] and other local groups, gathered together by a project named CAMI AMIC (Friendly path). The focus of these demands has been the pedestrianisation of Comte Borrell I Consell de Cent, since most of the district's public schools are located on these streets.
In response to the residents' discontent with this wasteland in l'Eixample, an initiative was created with the objective of staging various activities on the site, in order to reclaim the space. From this arose the platform Recreant Cruïlles, a group-project for investigation and activity at the site. While urbanisation is not possible, the platform proposes a temporary use for the space, through activities resulting from dialogue and community participation.

Collaboration with Idensitat
Within this context, Idensitat has established a process of collaboration with the group Recreant Cruïlles to work together on reclamation, giving support and planning workshops and other activities for the temporary use of this space.
On the 11th and the 12th of May 2012 several proposals for using the site were presented publicly and using the Prototype CODE 7 (a device built in the iD Barrio Import / Export workshop).

Workshop direction and collaborators:
MAKEA is a non-profit cultural association focusing on social, artistic and educational development through creative recycling, and works for environmental awareness around the problem of waste in our society. It is a network of people who do not wish to contribute to the growth of waste dumps, landfills, etc.. and who believe in the potential of the free exchange of creativity as a powerful tool to change society, and instil a little more respect for the planet we inhabit www.makeatuvida.net

Recreant Cruïlles is a group project working for the release of the Germanetes site, while council plans for the land remain under deliberation. The collective bases its actions upon the idea that empty spaces in the district represent a waste of resources, and that the district's residents should own and manage them. To realise these claims the group calls for the participation of all residents and district associations, to draft a self managed project for the site. (www.recreantcruilles.wordpress.com)

IDENSITAT is an arts project investigating ways of impacting upon the public sphere through creative proposals related to place and territory in their spatial, temporal and social dimensions.
Since its beginning in 1999, IDENSITAT has been in continuous transformation to become a complex system, incorporating other projects, actions or interventions, promoting processes, organising exhibitions, publishing..., altogether deploying a variety of creative strategies to realise an activity or set of activities. A system based on collaborative dynamics in order to build a relationship between contemporary artistic practices and social space, through research, production, education in a particular context, and distribution throughout a wider context. Under the rubric of, "to experiment with a location to transform artistic practices, and to experiment with artistic practices  to transform the location", IDENSITAT highlights the active role which art plays in social context.