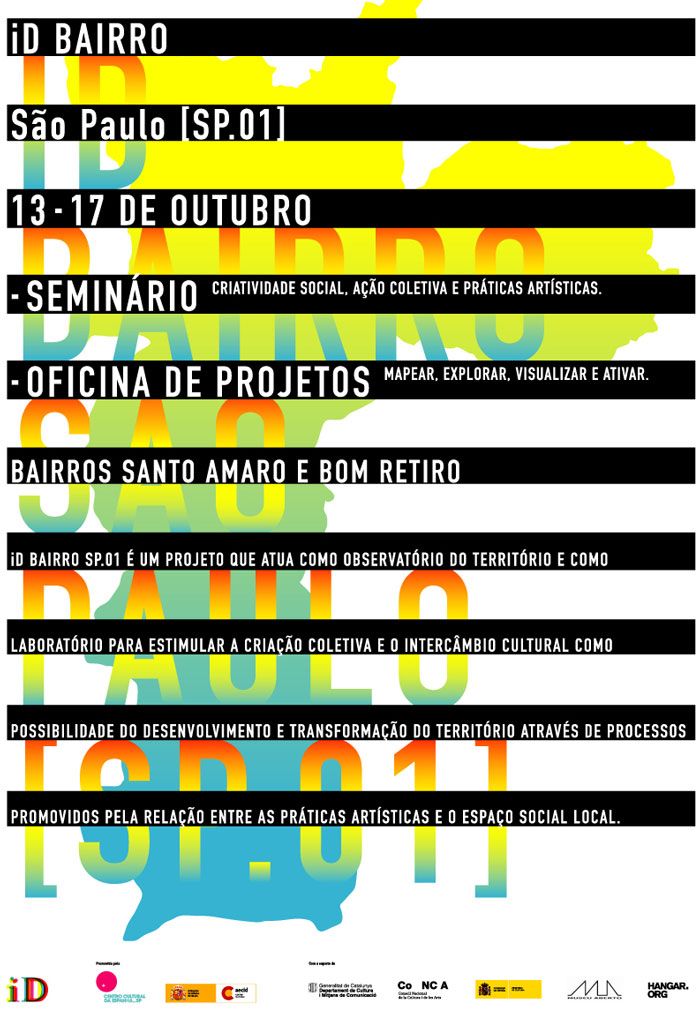 The project iD Barrio SP.01 acted as an observatory of territory and a laboratory for the development of creative processes related to certain ultra-local social activities in certain microcontexts of contemporary urban concentrations. The project aimed at stimulating collective creativity and cultural exchange as a tool for the development and transformation of territory through creative processes, where artistic practices and local social space converge. To analyse in order to understand spatial dynamics, to visualise in order to interpret various mechanisms operating in these places, to plan in order to sketch out new productive dynamics, to collaborate in order to enhance and multiply creative capacities. The proposal for the project included the creation of a network based on a three-phase structure: International seminar, Collective workshop and a travelling exhibition.

iD Barrio is based on the idea that art can be an innovating factor in the processes of urban transformation, since it can bring latent social creativity to the surface, developing it though collective actions. This affirmation raises a series of questions which were discussed in the context of the seminar and the workshops:

How is art related to processes of urban and social transformation? What role and function can participative processes play? How can social creativity be triggered in a particular environment? How can creative processes affect a local environment? How can one become involved in the sphere of collective action? Is urban transformation open to projects? What relationship exists between cultural policies and territorial planning? Can local contexts be part of the global cultural discussion?

Objectives
-To link up different urban spaces by creating temporary circuits, and practices of urban appropriation and visualisation.
-To promote the development of creative projects working alongside local actions in the specific context of the districts of Santo Amaro and Bom Retiro in São Paulo.
- To encourage the development of projects which facillitate external contacts and implications.
-To promote dialogue between local and international experiences, working through artistic practice, socio-cultural mediation, critical analysis for the development of networked platforms and the activation of social creativity.

Seminar: October 13 & 14 de 2010. The seminar focused on the urban environment starting with creativity, participation and artistic practices. Special emphasis was placed on managing participatory processes, the dynamics of working in local environments in relation to ultra-local processes and discourses. Artists, cultural workers, experts and scholars of processes of urban transformation in specific districts came together both to analyse differences and to draw points of connection from their fields of action.

The workshop proposed mapping, exploring, visualising and activating, [really hate this last word in its local context – also, since this is the name of the workshop, it reads very badly] generating a series of projects based upon direct contact with the areas, analysing possibilities for action, raising awareness of specific issues which arise among the participants and in each location, and finally activating processes and micro-projects based on the reversibility of proposals and territories.

Rita Alves [São Paulo]. PhD in Anthropology. Coordinator of the Social Sciences course at the Social Sciences faculty of the PUC-SP, where she also works as professor of anthropology. She participates in the research project Urban Youth: aesthetic mechanisms and cultural citizen actions (with the support of CLACSO) and is a member of the research group Imagens, Metropolis and Youth Cultures of CNPq. She participates in the international researcher network Grupo de Trabajo Juveniles and Nuevas Prácticas Políticas in Latin America (Consejo Latinoamericano de Ciencias Sociales, CLACSO). Member of the Communication Research Center and Urban Cultures of Brasil (Sociedad Brasileña de Estudios Interdisciplinarios de Comunicación).

Viviana Bravo [Santiago de Chile].Visual artist specialising in the integration between Art and Architecture. Master in Visual Communication with emphasis on Experimental Design at the Hochschule für Gestaltung Offenbach am Main, specialising in “Integration of Arts and Architecture” in the Kunstakademie Düsseldorf, Bachelor of Arts at the University of Chile. Lecturer at the Faculty of Architecture and Urbanism of the University of Chile, where she designs and coordinates collaborative research projects related to social transformations and their visualisation in urban space. Since 2008, she has directed DUPLEX, a collaborative platform where she has edited “manzana z: la ciudad invisible”, “campamento” and “trabajo”. Since 2009, she has been coordinating the seminar “Decentralised Practices: International Seminar on Art, Aesthetics and Urban Politics” at the Cultural Centre of Spain, Santiago.

André Costa [São Paulo]. Documentary filmmaker. Professor of Film and TV - FAAP and Visual Creation and Multimedia in the Graduate Program at USJT. Educator and researcher in audiovisual studies. He has directed and produced award-winning documentaries. In 2007, he was a member of the Selection and Programming Committee of the 6th International Festival of Electronic Art Videobrasil. In 2009 he was a member of the Special Selection Committee of film projects of the Ministry of Culture and Premio Estímulo de Curta-Metragen de la Secretaría de Estado de la cultura of São Paulo. He has participated as a curator and jury member in numerous exhibitions and cinema and video festivals.

Rogerio da Costa [São Paulo]. PhD in History of Philosophy – University of Paris (Paris-Sorbonne) (1998). He is currently assistant professor of the Graduate Programme in Communication and Semiotics at the PUCSP. In 2004-2005 he directed the technology section at PUCSP and in 2005-2006, the information techonologies and methodologies section at BIREME / OPS / OMS. Member of the Junta Directiva de Artístico y Cultural MIS / St. Paul, and he currently directs the Laboratorio de Inteligencia Colectiva - LINC (www.linc.org.br). His work focuses on collective intelligence, social networks, cyberculture, virtual communities, biopolitics and cognitive capitalism.

Domènec [Mataró]. Visual Artist. Co-editor of Roulotte publication and board member of Can Xalant Centro de Creación y Pensamiento Contemporáneo de Mataró. He has built up a sculptural and photographic body of work, along with installations and interventions in public space, which consider the architectural project as one of the most productive and complex imaginary constructions of the modern tradition. He has taken part in several exhibitions, interventions and in situ projects in Ireland, Mexico, Belgium, France, Italy, USA, Canada, Brasil, Argentina, Finlandia, Poland, Israel and Palestine.[http://www.domenec.net]

Fadhila Mammar [Madrid] Bachelor in Spanish Philology at the University of Grenoble (France) and Tunis, master in Migrations, Refugee and Intercommunal Relations. Fadhila Mammar is an expert in Intercultural Mediation. She is a founder member of the council of the University Institute of Research on Migrations, Ethnicity and Social development (IMEDES) at the Universidad Autonoma of Madrid. She was a Deputy manager for the Fourth World programmes of the NGO Medicos del Mundo. From 2005 to January, 2009, she directed the Service of Social Intercultural Mediation (SEMSI) in Madrid (administered by the Fundación General de la Universidad Autónoma de Madrid ). Nowadays teaches Master's and Post-graduate degrees at several universities, as well as training and consulting on issues such as mediation, interculturality and migrations in different Spanish and American institutions.

EIA EXPERIÊNCIA IMERSIVA AMBIENTAL [São Paulo]. Collective which restructures itself with each edition. Formed in 2004 with the intention of considering, acting and intervening in the urban context, the collective posits an event open to participation, generating a period of immersion for the realisation of collective actions in different parts of São Paulo. EIA has been working as a self-managed collective where artists and different participants meet in order to generate a temporary territory of artistic research. http://mapeia.wordpress.com http://www.mapeia.blogspot.com.

JAMAC [São Paulo]. Interdisciplinary collective proposing to establish, as an artistic and a cultural alternative, opportunities to involve youngsters from the periphery in positive action, giving them the right to citizenship and turning art into a shared experience and a motive for social participation. An initiative by Mónica Nador, Jamac establishes itself as an open space, carrying out projects which extend far beyond their main focal point. As a space for artistic practice, it has organised vocational training courses to discuss, among other subjects, issues such as economy, politics and philosophy.[http://jamacdigital.wordpress.com]

IMARGEM [São Paulo]. Interdisciplinary collective proposing activist and cultural projects in the south of São Paulo which deal with environmental issues related to water. The collective proposes discussions and campaigns regarding property and “sense of place” issues in urban areas through visual narratives, graffitti, theatre, Hip Hop, skate, mobility, recycling and accessibility to cultural activities and citizenship in the suburbs.

Directors of iD Barrio SP.01: Lilian Amaral, Member of POCS – Project for Open and Closed Space Sculpture Association and Director of Museu Aberto: the city as musem and the museum as artistic practice; and Ramon Parramon, Director of Idensitat and ACVic Centre d’Art Contemporani.

IDENSITAT is an arts project which investigates ways to impact the public sphere through creative proposals that work with place and territory exploring their physical and social aspects. Idensitat positions itself as a networked production and research space, developed in the field of art, to experiment with new forms of involvement and interaction in social space. The projects created during the workshop will form part of the Idensitat archive with the will of finding mechanisms of production for those that fit to specific dynamics linked to the local context.