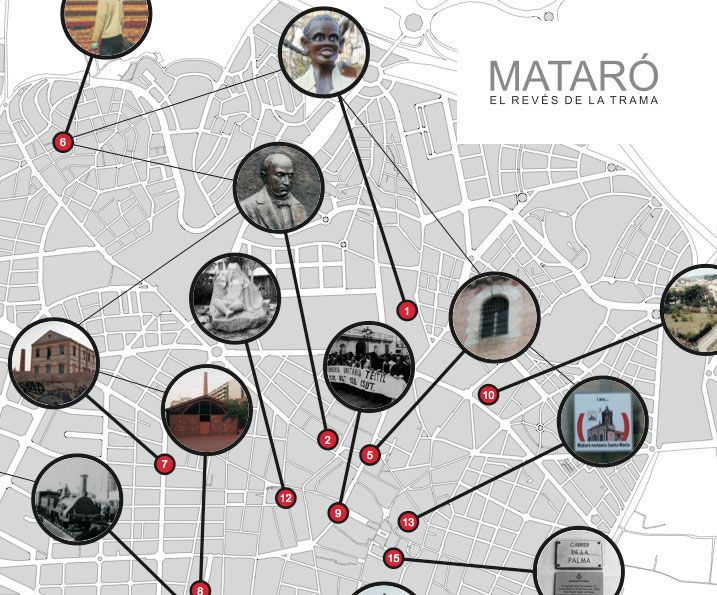 The Other Side of the Fabric is a project by Rogelio López Cuenca that was presented on December 17 in Can Palauet (Mataró). It is part of the collaboration between Can Xalant and IDENSITAT. Both share an interest in providing support to artistic projects thought up specifically fot the city of Mataró. It is also the result of the work group formed by Roser Caminal, Ismael Cabezudo, Laura Marte, Cecilia Postiglioni, Daniela Ortiz y Anna Recasens. Project site: www.mapademataro.net

Time past and time future
What might have been and what has been
Point to one end, which is always present.
T.S. Eliot: Four Quartets

MAPA DE MATARÓ is part of the project EL REVÉS DE LA TRAMA (THE OTHER SIDE OF THE FABRIC), conceived during the workshop Alternative Defeats: Now/here Mataró (Can Xalant, September - October, 2008). A work group arising from this meeting and comprising Roser Caminal, Ismael Cabezudo, Laura Marte, Cecilia Postiglioni, Daniela Ortiz and Anna Recasens, has been working with Rogelio Lopez Cuenca in a research concerning the definition of a "different" geography of the city, by means of tracing itineraries which can allow us to cross local history in several ways to visualize simultaneously aspects normally considered in isolation, classified and frozen in time, enclosed in specific spaces; a crisscross vision departing precisely from unplanned geographies of everyday life, and relating them with global processes in which these are both consequence and protagonists.
A conclusion, summarizing everything, reveals a repressive presence of what is “not said” and this lack of saying implies an emptiness covering what is really said.

El Revés de la Trama (THE OTHER SIDE OF THE FABRIC) is a project of Rogelio Lopez Cuenca presented on December 17 in Can Palauet (Mataró). It is part of a the collaboration between Can Xalant and Idensitat. Both share the interest of stimulating artistic projects designed specifically for Mataró's city. This project results from the group work by Roser Caminal, Ismael Cabezudo, Laura Marte, Cecilia Postiglioni, Daniela Ortiz and Anna Recasens. Web of the project: www.mapademataro.net

This MAP OF MATARÓ proposes to unravel the skein of history in multiple stories, like a rhizome starting with the net woven by the recurring thread of the textile industry in Mataró and those topics with which this one interlaces within time: the crisis of industrial capitalism or the globalization of markets, but also, and especially, the way in which power and violence bear directly on the bodies and the lives of the individuals - for example, the massive movements of people moved by the demand of workforce, or the incorporation of women to the wage-earning labor market and to public space; The map proposes a polyhedric cartography; flexible, versatile, capable of receiving and answering to the multiplicity of perspectives that coexist in a place and its memories.

Subjects have been chosen, their limits defined and a scheme established in which, like constellations of relationship and derivation between different personal aims, the group's common aims do not vanish. To this effect, the incorporation of a perspective of gender arises as a mobile and permanent axis of the project due to its constant rôle in history that has suffered a lack of consideration as to its importance.

The map, as a format chosen for the formalization of the project, implies a rejection of the authoritarian and linear story: it is a plan upon which to locate a proposal with multiple readings, and itineraries on the memory of place: At the still point of the turning world.