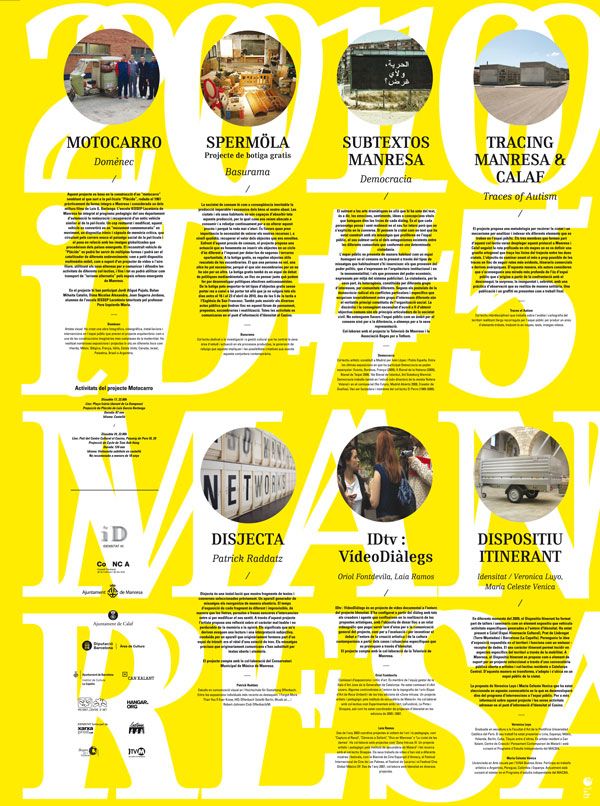 iD#5 Manresa. Seized City proposes a tour of the city through interventions carried out by diferent artists and collectives. The projects cover a number of complementary issues: they detect conflicts or suggest strategies for dialogue; camouflage in the public space or occupy it; involve people in the process or look for spectators. Whatever the tactics, themes, objectives or formalization, they propose mechanisms for negotiation with elements of latent tension in the public space. 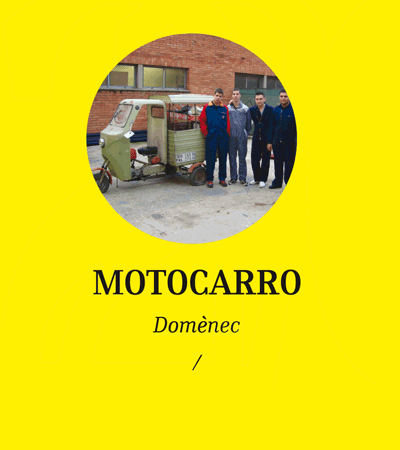 This project is based on the making of a replica of the tricycle used in the film “Plácido”, mainly shot in Manresa, and considered to be one of Luis G. Berlanga′s best films. The Lacetània institut of Manresa incorporated in its educational program of the automobile department the restoration and recovery of a vehicle similar to the one in the movie. Once restored and modified, this vehicle will become an itinerant "memorial", an ironic device and a capsule of critical review, that circulates in the streets and evokes the social landscape of the movie and puts it in relation to globalized images coming from emerging countries. The reconstructed vehicle of "Plácido" may be used in multiple ways and be the catalyst for different events: as a small mobile multimedia device, to support a video projector outdoors, using its loudspeakers to communicate and disseminate the activities of different groups, and even be the means of transport for "alternative tourism" through the emerging urban spaces Manresa. 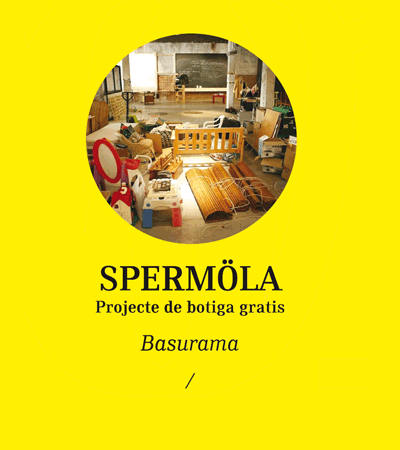 An inevitable consequence of consumer society is the non-stop and excessive production of goods. Cities and their inhabitants are not capable to absorb all this production; hence we are drawn to dump them in order not to alter this consuming process and not to stop the turning wheel. Reaching this point becomes important to assess the value of our resources and recover the real value of the objects that surround us.

Given this process of consumption, the project proposes an action which consists in the insertion of these objects in a cycle different from the one imposed in order to give them second and third chances, ignoring the imperative ultimatum of compulsory consumption. Useful objects rescued from the trash are given away for free in the shop. What one wants to give away might be needed by someone else, because your trash is not trash. The free shop is also a space for discussion on environmental policies, a place to think together about what we can do to develop effective anti-consumerist policies.

You can take all kinds of objects from the free shop without bringing anything in return, and bring all that you no longer want, every evening from 5 pm between April 16 and 23, 2010 at the San Francesc Church. You can also attend various public events taking place in this forum of thought, proposals, waste and reuse. Information about all activities will be posted at the Idensitat information desk at the Centre Cultural el Casino. 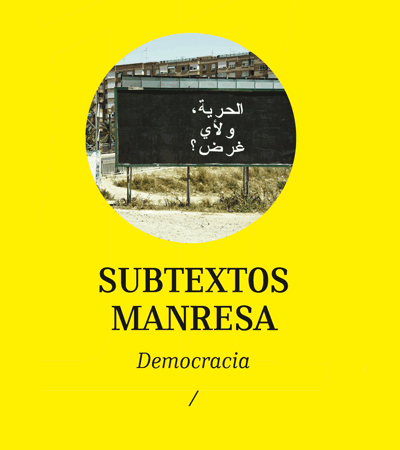 In the performing arts subtext is what lies beneath the text, that is, the vital emotions, feelings, ideas or concepts hidden along the lines of each dialogue, what each character thinks and feels truly in his heart but not explicitly in the dialogue. If we think of the city as a text that has been written with the messages that proliferate in the public space, its subtext would be the antagonisms that exist between the different communities that make up a particular citizenship. Aspirations, claims, self-representations that are never reflected in the communication channel that this same public space is.

Public space is frequently presented as a homogeneous space where consensus is revealed through the type of messages that exist in it; the ones that are provided by those in power and expressed through institutional and monumental architecture and those coming from the economic power and are expressed through advertising.
Citizenship for its part is heterogeneous, consisting of various interest groups, of different communities. According to the tenets of radical democracy the particular and specific conflicts that invariably arise between different interest groups are the very basic element of social organization. Discord and the consequent need for agreement in order to obtain common objectives are the principles that articulate civil society. Let us not perceive public space as an arena for consensus but instead one for difference, or at least the representation of this.

Televisió de Manresa and the Associació Bages per a Tothom collaborate with the project. 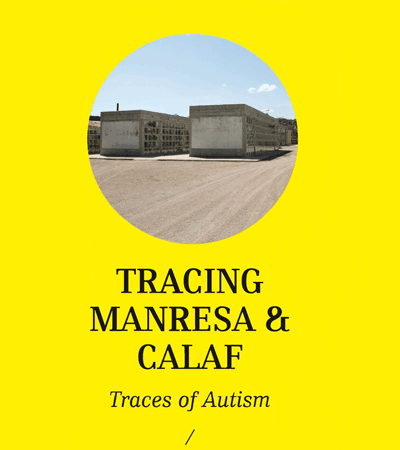 ﻿The project proposes a methodology for exploring the city and a mechanism to analyze and make an inventory of the different elements that are in the public space. The three members of this group used this methodology in Calaf and Manresa following the pre-defined routes on the maps which made a virtual grid between the two cities. Their goal was to walk by staying as close as possible to the lines of the grid instead of following more obvious routes. According to the authors, this method helps them to get a deeper look at the use of public space that originates from the confrontation with the unknown, surprise, uncertainty and, above all, with a practice of observation that is done in solitude. A publication and graffiti are presented as the final work. 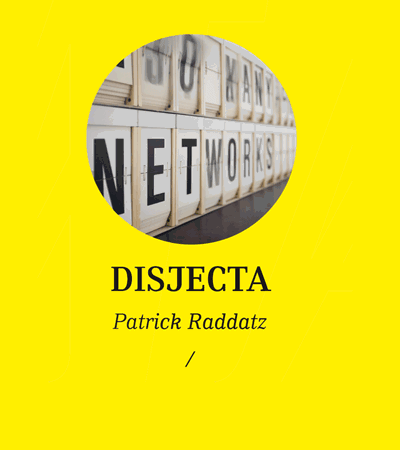 Disjecta is an installation that displays fragments of pre-selected texts and conversations. A device generates messages that are reorganized randomly. The display time of each fragment is different and unpredictable, so that letters, words or whole phrases interweave and thus change their own meaning. With this project the artist reflects on the malleable and enduring nature of memory or opinion. The meanings that are derived evoke a subjective reading and interpretation, conducted by a device that was originally the sign of a train station. The accurate messages that it originally communicated have been replaced by random texts.
The Conservatori Municipal de Música de Manresa collaborates with the project. 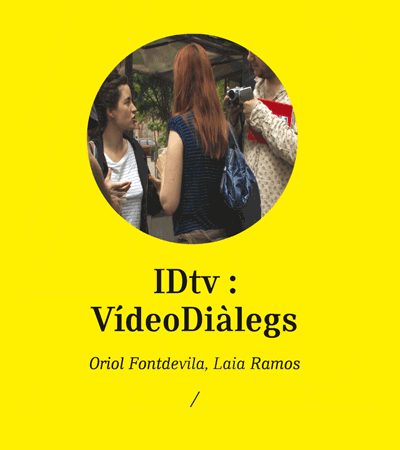 IDTV: VídeoDiàlegs is a documentary project about Idensitat. It consists of a dialogue with all the creators that carried out the proposals, with the aim of creating a videographic story that could serve as a general communication tool for Idensitat, as well as for evaluating the projects and encouraging debate on artistic creativity and contemporary culture through the specific cases and situations within Idensitat. 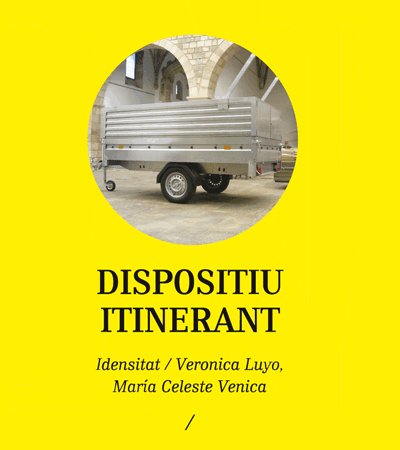 At different moments in 2009 the Touring Device has been part of workshops and seminars as an itinerant exhibition that conveys specific activities generated by Idensitat. It has been present in Calaf (Hivernacle Cultural), Prat de Llobregat (Torre Muntadas) and Barcelona (La Capella). It pursues the idea of an exhibition that expands in the territory and serves as a transmitter - receiver of data. Its itinerant nature allows to affect specific aspects of the territory through mobility. In Manresa, the Touring Device is proposed as a support for a project selected through an open call to artists and groups residing in Central Catalonia. In this way it is transformed, adapted and located in a public area of the city.

The proposal of Veronica Luyo and Maria Celeste Venice has been selected to be developed within the program of interventions in public space. For more information on this project and its activities are please refer to the Idensitat information desk at the Centre Cultural el Casino.