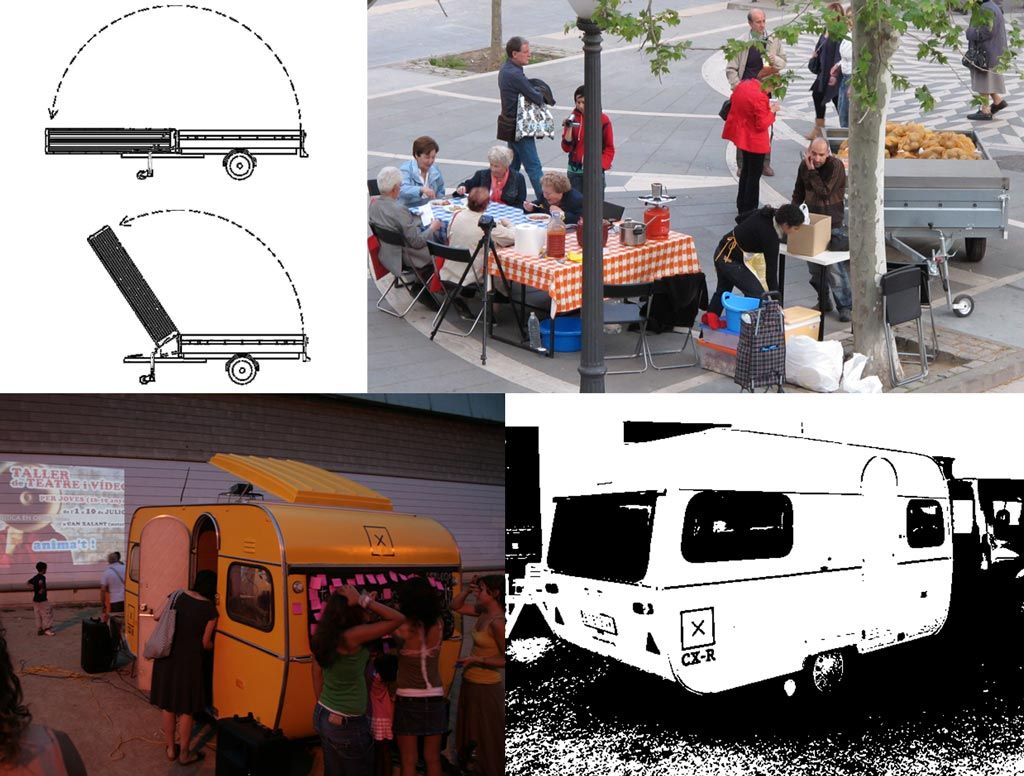 The project Ceci n’est pas une voiture; Mobile devices lurking, originated as an exercise in documentation and reflection upon the construction of mobile devices as elements of an expanded concept of, or perhaps even as an alternative to, the Museum. It was a research project, with the aim of cataloguing and reflecting upon projects circulating within public space which challenge the conventional notion of the Museum, reformulating instead the functions of the exhibition display as a nomadic platform for the encouragement of direct and self-managed participation, the development of social research, and the distribution of education. The project was carried out as a series of activities, each of which was designed as Parking .The project as a whole was a build-up of successive Parkings, carried out throughout 2011 and 2012. 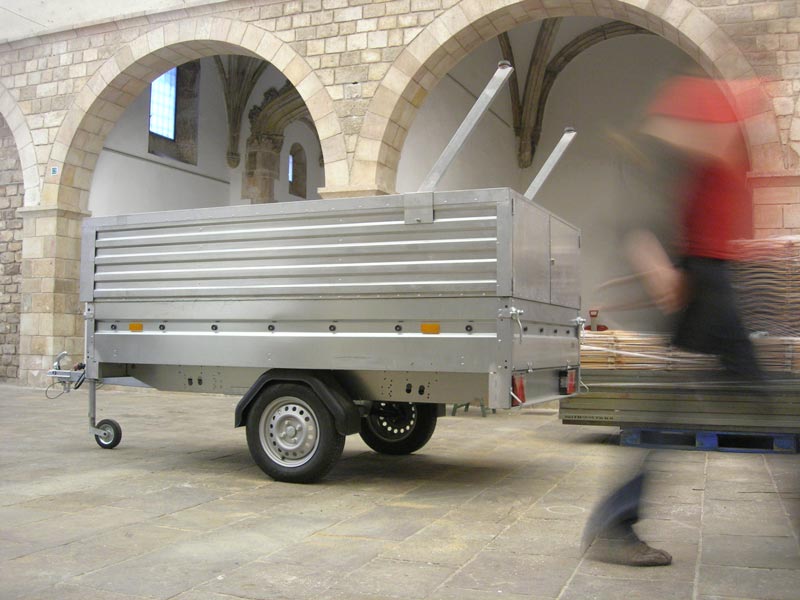 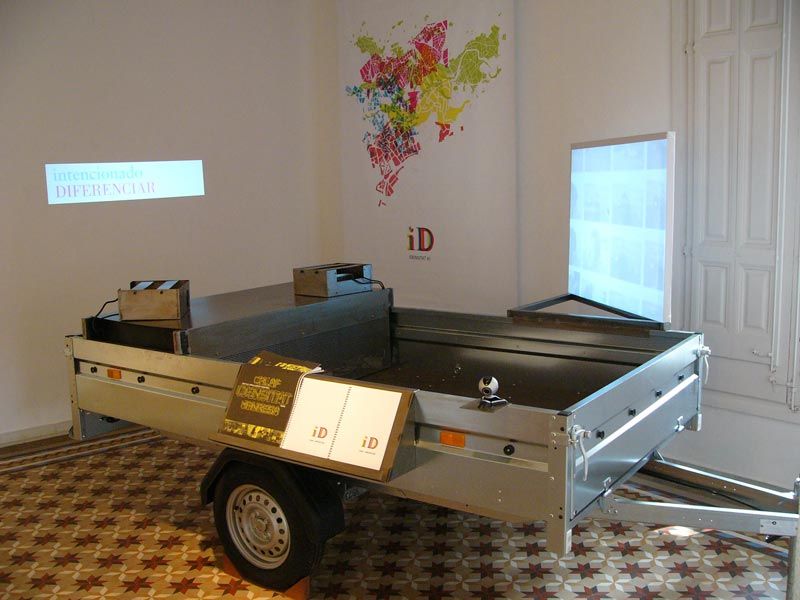 Idensitat's Touring device [DI]
Throughout 2009 and 2010, Idensitat's Touring Device formed part of workshops and seminars as a touring exhibition which conveyed specific activities generated by Idensitat. It took part in the iD Barrio project, and was present at various educational activities and interventions in public space in Calaf ( Hivernacle Cultural space), Prat de Llobregat (Torre Muntadas), Barcelona (La Capella) and Manresa (Passeig Pere III). It aimed to be an exhibition which spreads out from a single location, serving as a transmitter – receiver of data, its very mobility allowing the device to affect specific aspects within its immediate location. The TOuring device was a way of demonstrating and displaying one of Idensitat’s main objectives, which is to be an itinerant production space, travelling along with the projects it produces, while at the same time generating insights, analysis and proposals for change. In this case it was proposed as a support element to be integrated with projects selected from the open call, and to be modified and adapted according to need. The Touring Device carried additional elements such as a projector, various tables, chairs, projection screens and vertical supports. 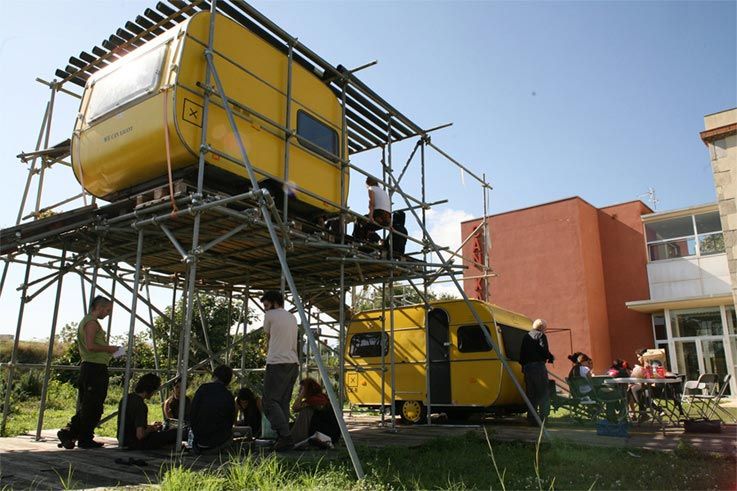 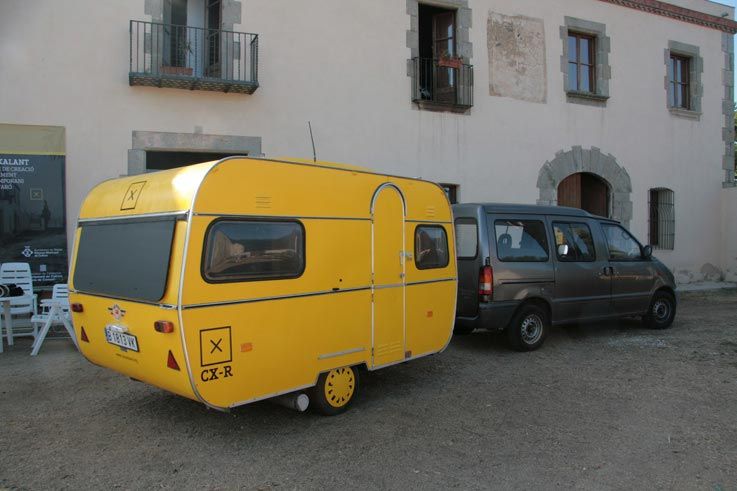 Can Xalant's CX-R
CX-R is an adapted mobile caravan, allowing the centre to spread out across the public arena, to establish collaborations in its immediate surroundings, and to expand its scope of action and repercussion. CX-R was designed and produced in 2009 by Argentinian architects a77 (Gustavo Diéguez y Lucas Gilardi) and Catalan architect Pau Faus as the result of a workshop aiming for the collective construction of infrastructure for the centre's courtyard, through the development of a network of institutions and people in the immediate environment. The laboratory was conceived as a process of physical construction, but also as a platform for social interaction to set out a programme. wecanxalant.blogspot.com
Since its opening, CX-R has been requested for different uses: artistic-educational interventions in schools, district festivals, as a stage for performances, artistic interventions, among others. CX-R was capable of modification according to the needs of each application and project.

Production of two projects, selected from a public open call, developed as residency projects in ACVic and Can Xalant, and using Idensitat’s touring device and CX-R by Can Xalant (June–September 2011). http://idensitat.net

Open call for a project of intervention in Vic's public space using Can Xalant’s CX-R as a tool for research and production. This activity is part of the residency program of ACVIC. Centre d’Arts Contemporànies, in collaboration with Idensitat.

Participation
Both open calls were for artists to make proposals of intervention in public space from a cross-disciplinary perspective, willing to use different strategies of interaction within the social spaces of Mataró and Vic (Barcelona). Participants were required to advance a proposal incorporating Idensitat’s Touring Device, in the case of Mataró, and Can Xalant’s CX-R, in the case of Vic, to be carried out in urbanised public space. The concept of space was to be understood in its dual capacity, physical and social. There were no prerequisites, other than those mentioned above; the project's artists were free to tackle cultural, political, and educational issues, or any other subject matter. In any case, strategy and formalisation were required to deal with elements of latent tension in public space.