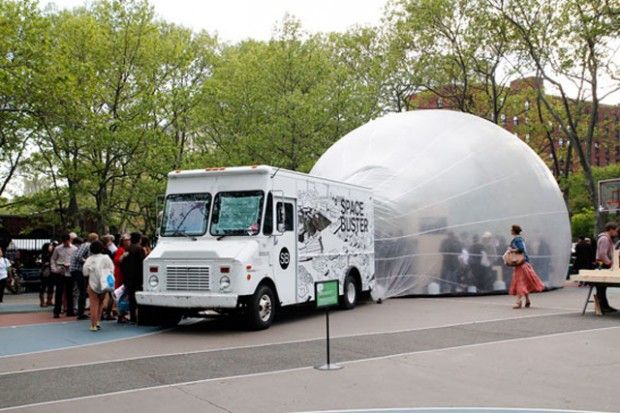 SPACES, TRANSITS AND MOBILE DEVICES.
Workshop carried out by Raumlabor
10-14.10.2011

IDENSITAT, in collaboration with Can Xalant and ACVic Centre d’Arts Contemporànies, launched an open call to participate in the workshop Spaces, Transits and Mobile Devices, led by the collective Raumlabor from Berlin [Andrea Hofmann, Axel Timm, Benjamin Foerster-Baldenius, Francesco Apuzzo, Jan Liesegang, Markus Bader y Matthias Rick].
The Spaces, Transits and Mobile Devices workshop formed part of the project Ceci n'est pas une voiture, curated by Martí Peran, organised in collaboration with Can Xalant. Centre de Creació i Pensament Contemporani de Mataró, ACVic Centre d’Arts Contemporànies and IDENSITAT, and was realised in collaboration with Cercle Artístic Sant Lluc, Ajuntament de Barcelona. Institut de Cultura and CoNCA. The project began as an exercise in documentation and reflection on the construction of mobile artifacts as elements for an expanded concept of, or as an alternative to, the Museum. 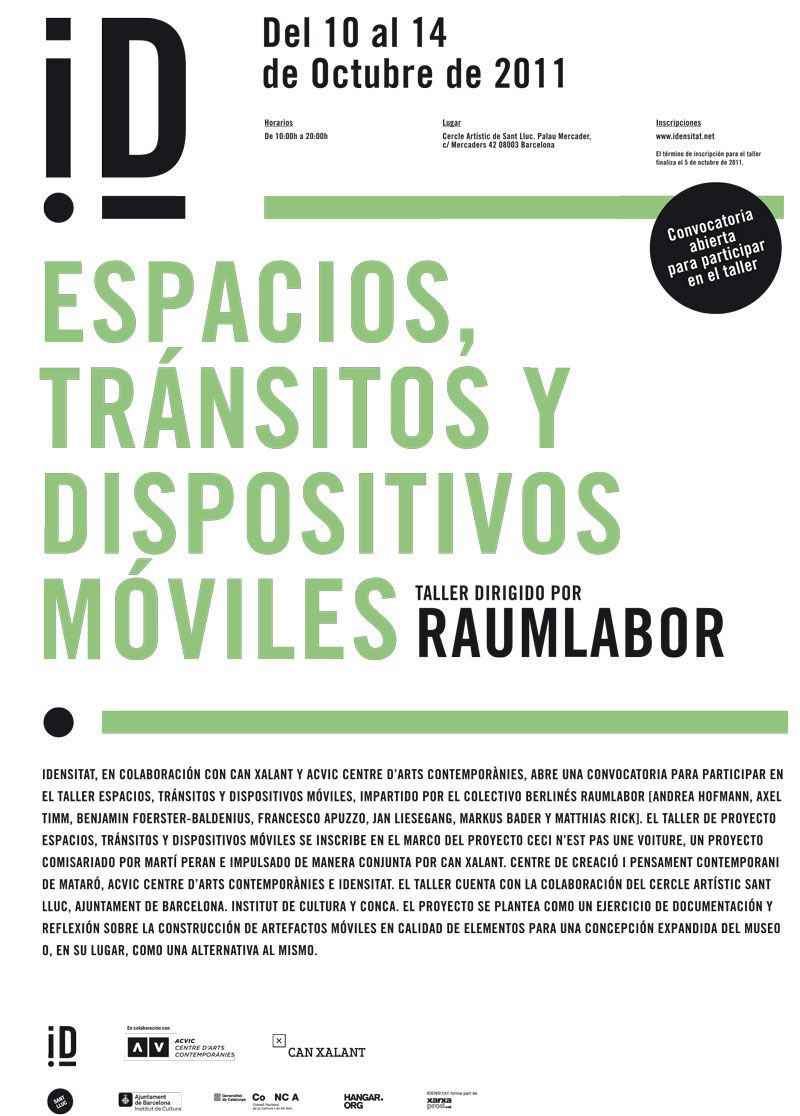 Description of the workshop, by Raumlabor

We are interested in cities as spaces of activity. Urban identity arises primarily/originates from the identification of oneself in relation to the city.

In the past, a gipsy caravan would come to our village every other year with a number of old trailers and a big tent. Travelling all over the country, they always carried the latest inventions from place to place. They brought strange food, spices from far away, the strongest man, a prophet woman and a mirror in which you could see your soul. The people in the village were very excited by their arrival, but also very scared. This nomadic free life somehow questioned our quiet and ordered community to its foundations. After three or four weeks, when the Caravan left, there was always someone missing from the village, and quite a few others had difficulties in returning to their everyday routine.

We wanted to approach the idea of a mobile museum in a somewhat similar way. What obstacles might we face in travelling from site to site in these days? What was the role of collectivity in our ‘post-everything’ society? What should happen in a mobile museum, transporting content and meaning from one place to another? How could we question our everyday routines? What could be that mirror in which we see ourselves at our best potential? What kind of art could be exhibited in a mobile museum?

The mobile museum we aimed to design consists of single mobile structures. Each structure would function independently but in combination with, and in relation to, the others, creating a new kind of museum and possibilities for a temporary redefinition of public space. In the workshop we created a 1:5 model and drawings of this new museum. The participants formed different groups, each of which developed one mobile unit which could work independently and also be combined as the mobile museum. The results were exhibited at the exhibition Esto no es un museo. Artefactos móbiles al acecho (this is not a museum, mobile devices lurking), (October 2011 to January 2012). 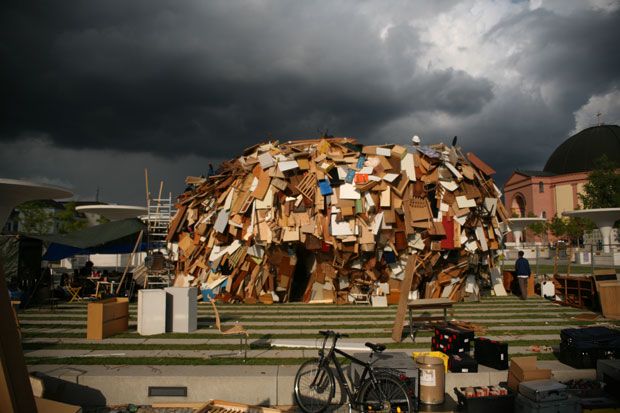 Aims of the workshop

- To combine spatial observation and social research, in order to gain knowledge of aspirations, necessities and shortages in the district of Santa Caterina, Barcelona.
- To project models of mobile devices, responding to research outcomes.
- To establish a dialogue between participants and to promote co-operative proposals.
- To question the conventional idea of museum as institution, and reformulate the functions of the exhibition display as a nomadic platform nurturing direct and self-managed participation, development of social research and dissemination of educational experiences.

IDENSITAT is an artistic project that investigates ways to influence public space through creative proposals in relation to places and territories, from the physical and social dimensions. The organisation is established as a production and research network which, through art, experiences new ways of involvement and interaction with social contexts.