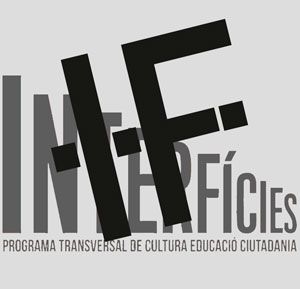 INTERFACES | A cross-disciplinary programme between education, culture and citizenship at Arts Santa Monica.

INTERFACES is a programme coordinated by Idensitat, Sinapsis and Transductores. Pedagogías Colectivas for Arts Santa Monica, which aims to promote discussion and to produce new forms of knowledge based upon the development of processes and activities which facilitate the opening of  new spaces for interaction and engagement with citizens, the centre itself and its programme of events. The programme is based upon participatory formats, networking and collaborative tools as working methodologies. These tools will be implemented to promote transversality between both the artistic fields and other fields within the social sphere, as well as to promote collusion between, and work with, other institutions, organisations and communities, always with maximum respect to those who form part of the social fabric in the art centre's immediate surroundings

INTERFACES works as a laboratory and a pivotal space, promoting a more porous relationship between the Arts Santa Monica and its immediate social contexts, creating networks of collaboration and contact areas between the centre and society at large. The programme develops opportunities for dialogue from which to advance research into, and the production of shared knowledge based upon projects, activities and intersecting practices of mediation and education  connecting people, venues, organisations, institutions and diverse fields of activity. The mediation programme designs activities based upon collaborative processes with an interdisciplinary approach, aiming to bring together various disciplines which converge upon the centre at various contextual and geographical scales, creating a variety of types of partners and linkages to the audiences at Arts Santa Monica.

Interficies is developing research and experimentation into new formats and methods based upon cultural practices which interrelate with works of engagement, collaboration and citizen participation, starting with the recognition of cultural contexts of citizens and of transversal projections, therefore enhancing the interaction among various cultures, among artistic and non artistic disciplines and areas, among different audiences. The production of knowledge is collective, and its transference and dissemination is basic in encouraging the social return of the arts centre towards those spheres with which it interacts: the spheres of culture, education and community, among others.

INTERFICIES will work to:
- Strengthen the art centre's orientation towards supporting creativity and cultural production, based upon proposals of mediation, education and networking focused on innovation and experimentation;
- Promote an open, interdisciplinary and citizen dimension of the Arts Santa Monica, promoting a interdependent framework with other institutions, organisations and communities starting with networking and collaborations both immediate and long term;
- Promote transversality in actions and objectives within the programme of the Arts Santa Monica.
- Provide that the centre becomes a resource and catalyst for new relationships with the social environment or certain areas of work.

Activities developed by Idensitat, Sinapsis and Transductores in Arts Santa Monica in the frame of Interfaces programme. 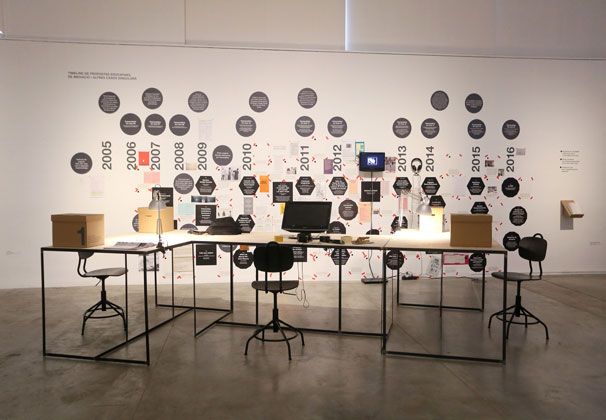 This activity is a workshop in dialogue with the exhibition located in the Art Gallery Young "Follow the signs as if shortsighted" to work on the paths of life, professional and desires practices emerging art between mediation, research and curating.
Activity for creators and emerging artists, art students, art education, mediation, curating and other fields of culture. People interested in general in the field of culture, professional and related occupations. 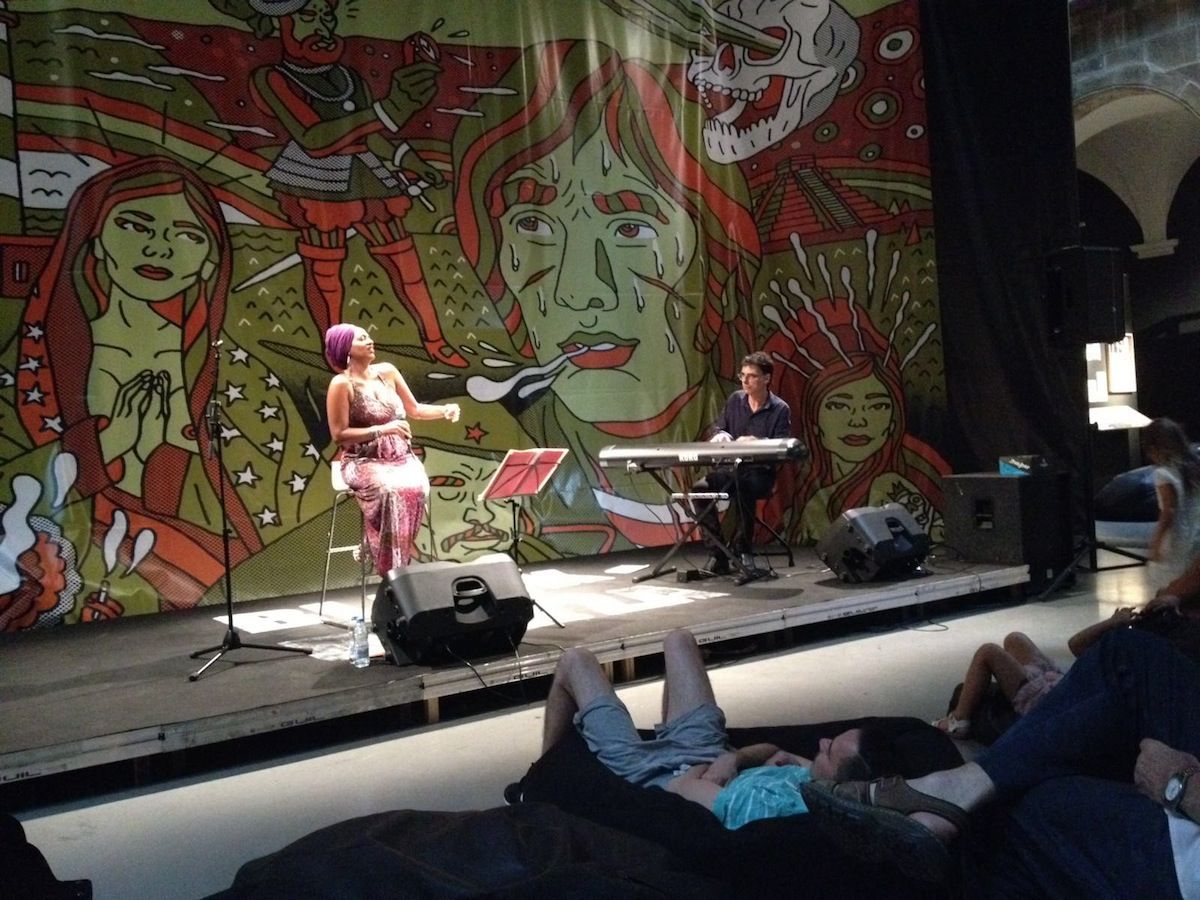 Interfaces in collaboration with the 'Taller de Músics del Raval'. The activity is part of a dialogue within the residence of Fermin Muguruza on the occasion of the exhibition Black is Beltza related to music and its political context. Two musicians of the Taller de Músics del Raval, Violeta Curry and Jaume Vilaseca, will perform songs in dialogue with the content and the sociocultural and musical contexts shown in the exhibition Black is Beltza. The songs will be accompanied by comments and various dialogues. The documentary "Noche de vino tinto" (1966), by Jose Maria Nunes, gives us a valuable document of a number of wineries and bars of a rouge Barcelona who disappeared in the 90s. What gets left after those red wine nights? The activity is led by Taller de Ficció: "we believe that not only a tough hangover gets left after those nights, and for this reason we have launched an investigation into spaces in the neighborhood that still maintains strong community ties and have even created models of sustainability beyond the easy money offered by the tourism". From one of the most affected neighborhoods by the gentrification process, what can we learn from the historical experience of certain bars to have the possibility, afterwords, to build stable communities? The materials resulting from this research will be shared at a round table in the Koitton Club.

Round table, with Adriano Galante (Seward, Union of Musicians), Lucia Lijtmaer (writer and journalist) and Daniel Granados (musician, researcher and cultural producer). The moderator: Jordi Oliveras (Indigestió).
We'll discuss about the issues in between of music and politics in this round table such as gender perspective on musical activity, the proposals for action from the institutional and political positions from the organization of musicians, among others.

Internet radio broadcast, with Rodrigo Lavina (musician) and Jordi Oliveras (Indigestió).
The main reference of Black is Belza exhibition is a comic which is used by Fermín Muguruza in his exhibition project at Arts Santa Monica. This comic finds different musical expressions that joins the political and social moments of the 60s: African-American music, Cuban music, Basque song...
In this program we will discuss and hear some of this music, with notes and anecdotes about their meaning, and also with some counterpoint and complementary contribution.

Based on the residence of Black is Beltza in Santa Monica, we propose a work session that dialogues with the activity scheduled on July the 5th, related to the Black Panthers, named "The Vanguard of the revolution". In our case we want to dialogue through a number of people and initiatives of the city with the domestic dimension, feminist and popular education of Black Panthers. The invisible reality of cares and sustaining life, which carries a rearguard of this political movement. This project was born from a proposal of the teaching of the Union of Doctors and Graduates in Fine Arts and also by Teachers of Drawing in Catalonia (COLBACAT) in collaboration with Interfaces. This exhibition is part of a process of long-term work with art education and with schools teachers.
Organizers: Association of Doctors and Graduates in Fine Arts and Drawing Teachers of Catalonia (COLBACAT), and Arts Santa Monica.
In collaboration with: Teaching department of the Government of Catalonia, Drawing department of the University of Barcelona, Faculty of Fine Arts, University of Barcelona; Department of musial, plastic and corporal teaching, faculty of education Universidad Autónoma de Barcelona, Teaching Musical, Plastic and Corporal, Department of Visual teaching and Plastic Education, Faculty of Education, University of Barcelona.

The collectives behind Interfaces:
Idensitat is an art project that experiments with ways of influencing the territory in its spatial, temporal and social dimensions. It has been set up as a system that incorporates other projects, actions and interventions developed in different spaces and contexts. Since 1999 it has promoted activities that combine investigation, production, education and curatorship.
Sinapsis is a collective for research and production based on collaborative and contextual artistic and cultural practices that, since 2007, has emphasised networking via cultural mediation/negotiation and critical pedagogy.
Transductores is a platform for mediation, investigation and curatorship set up in 2009. It has designed curatorship and mediation processes at a country-wide and international level.