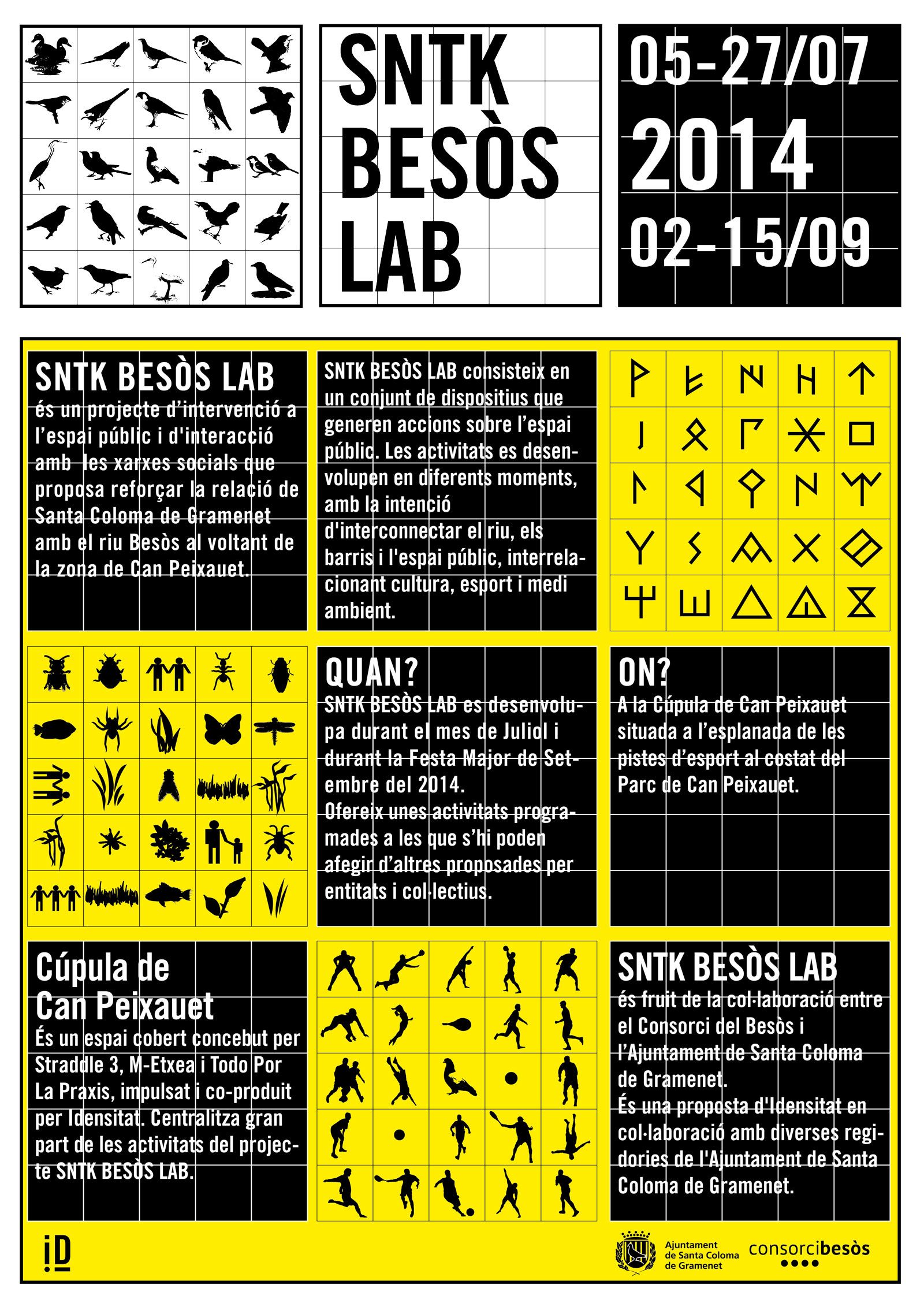 SNTK BESÒS LAB is a project of intervention in public space and of interaction with social networks which aims to strengthen the connection between Santa Coloma de Gramenet and the river Besòs around the area of Can Peixauet.

Can Peixauet is an area linking the river Besos with several districts in Santa Coloma de Gramenet, an area which stands in a space of confluence, where various public spaces and facilities are concentrated. On the one hand, it is one of the main gateways to the city. On the other, it is an area of boundaries between neighbourhoods (Riu Sud, Santa Rosa, Raval and Can Mariné), a place with a diverse social fabric, representing a margin of the city on the edge of the river.

SNTK BESÒS LAB intends to bring together two visions for the city; one, the traditional hierarchical model of urban planning associated with the construction and management of facilities for delegation (top-down); the other, the adaptive planning model based on the public management of empty spaces, buildings and facilities in crisis, which generate permanent spaces of transition, or future collective facilities (bottom-up). The project focuses on this second vision, and aims to link two realities: a metropolitan experience, linked to the transformation of the social use of the river Besos, and a more intimate experience, focusing on the districts closest to the river, belonging to Santa Coloma.

SNTK BESÒS LAB consists of a set of devices generating actions on the subject of public space. The activities will be developed at different times, with the aim of interconnecting the river, the surrounding districts and public space, as well as creating an interrelationship between culture, sports and the environment.

WHEN?
The project will be developed during the month of July, and during the local festival in September 2014.

WHERE?
SNTK BESÒS LAB offers a programme of activities, though many others may be added subsequently. Many of the project's activities will be centred upon the Can Peixauet Dome, located on the esplanade of the sports arena along Can Peixauet Park.

Cúpula de Can Peixauetnow part of Project SNTK BESÒS LAB, is a covered area of 31m x18 m designed by Straddle 3, M-Etxea and Todo por la Praxis, and promoted and co-produced by Idensitat. 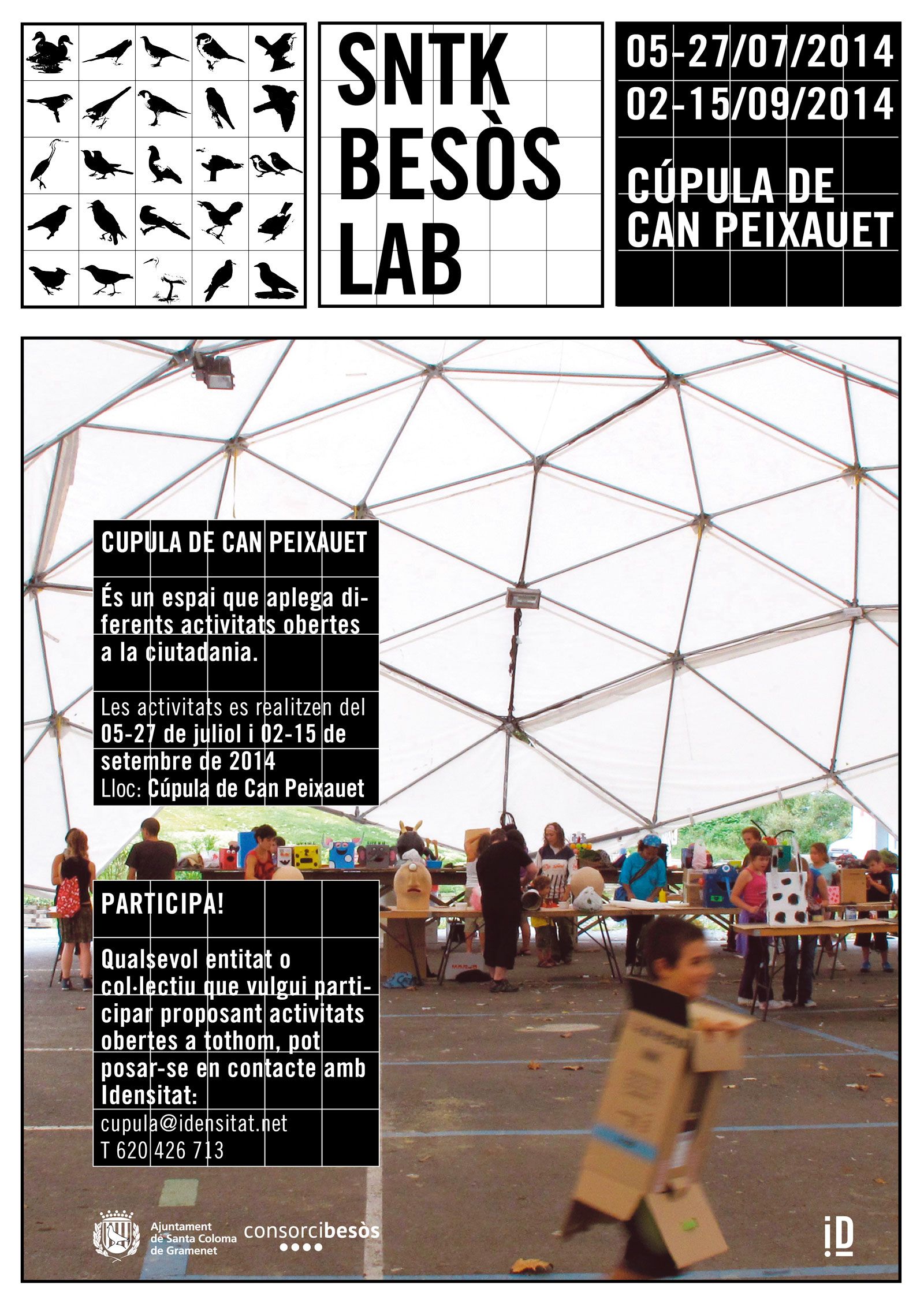 Can Peixauet Dome is a space which brings together several activities open to the public. As part of the project, SNTK BESÒS LAB will offer a programme of activities, and will also be open to external proposals.

The programmed activities are based upon proposals from throughout the social fabric of the area, the City of Santa Coloma and Idensitat. From 5th and 27th of July and from the 2nd to the 15th of September 2014, any collective or organisation within the city may advance proposals for the use of the dome, addressed either to the Ajuntament de Santa Coloma, or by sending an email to:This email address is being protected from spambots. You need JavaScript enabled to view it.

SNTK BESÒS LAB project will centralise most of its activities in the Peixauet Dome located on the esplanade of the sports area along the Park of Can Peixauet.

Can Peixauet Dome is a space of 31m x18 m designed  in collaboration by Straddle 3, M-Etxea and Todo por la Praxis, promoted and co-produced by Idensitat (as part of iD Sport 2012), now part of the project SNTK BESÒS LAB 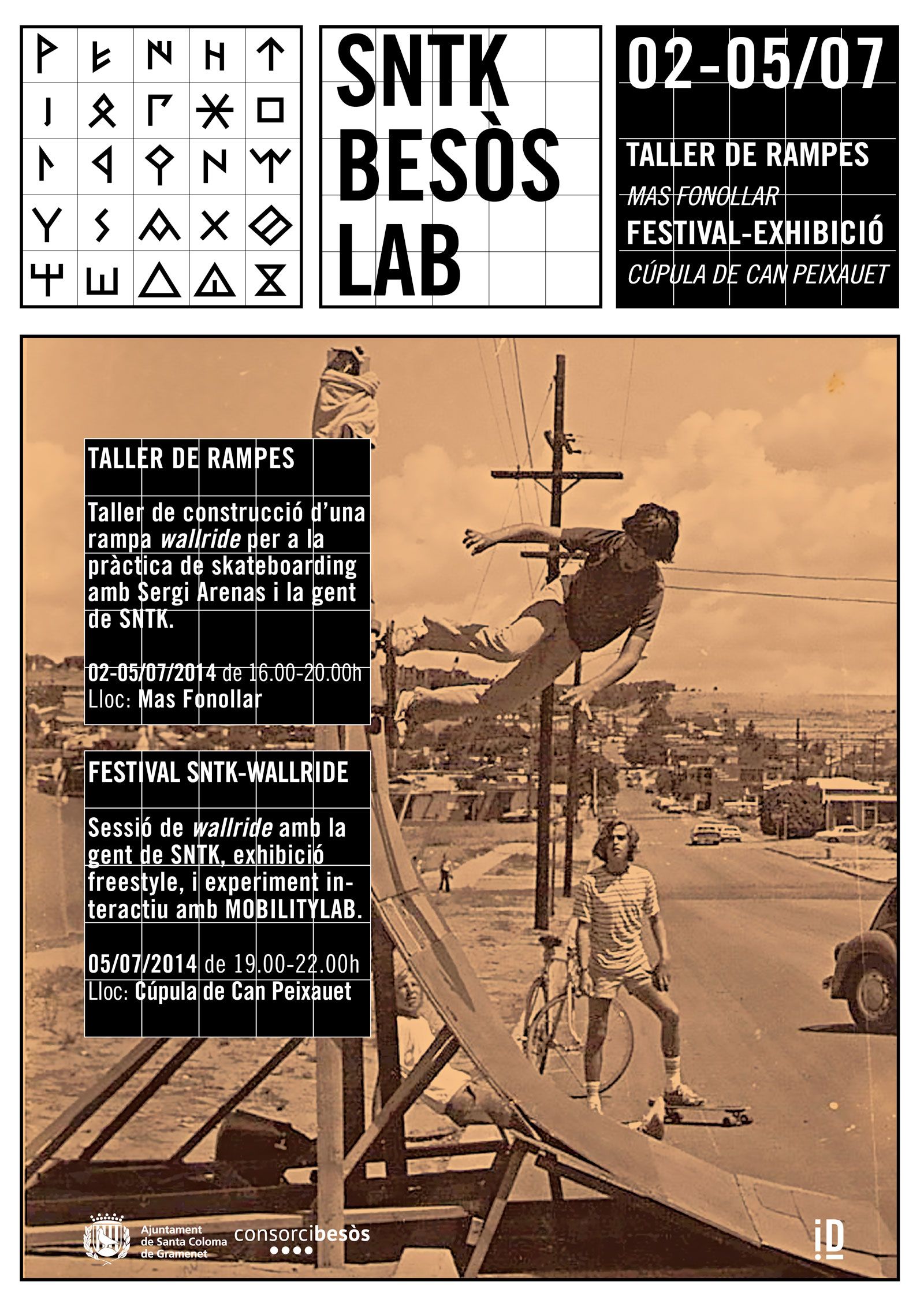 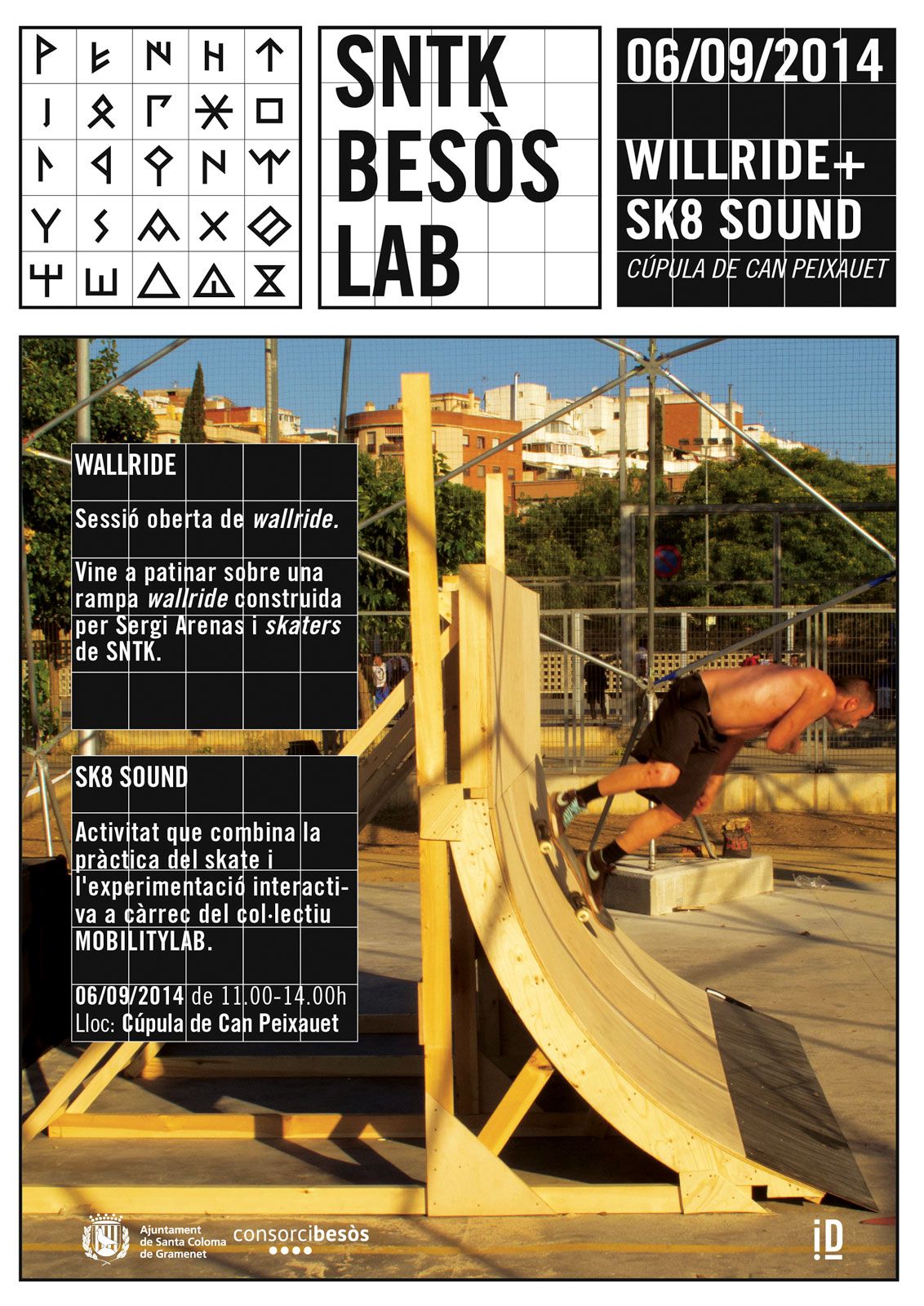 SK8 Sound | Mobilitylab
Interactive experiment which turns Skateboards into musical instruments. The natural movement of the skateboard acts as the generator of audio which, together with other similarly adapted skateboards, creates a sonic mix. Each skateboard, by using a computer programme, is assigned a different musical intrument, transforming the skateboarders' movements into sonic responses. The dynamics and flexibility of skateboarding allows for real time experimentation with intereactive digital systems. Through this project, MobilityLab broadens the transformation of urban practices in processes of collective creation. Sk8 Sound is a collaboration between Mobilitylab and @txa.

Mobilitylabis a platform created by Efraín Foglia, focusing upon on digital interaction and critical investigation, taking contemporary mobility as a focus of study. This phenomenon is analysed from a variety of perspectives, such as the forced relocation of workers, the effects of the domination of the car industry, the limitations and exclusions of citizens in public space, the asymmetry in channels of communication due to the monopolisation of digital networks, technological portability, etc.. The projects are the result of collaborations with different artists and / or communities. The platform has two experimental physical spaces, Barcelona and Mexico City. Collaborates mainly with Jordi Sala.
http://www.mobilitylab.net/ 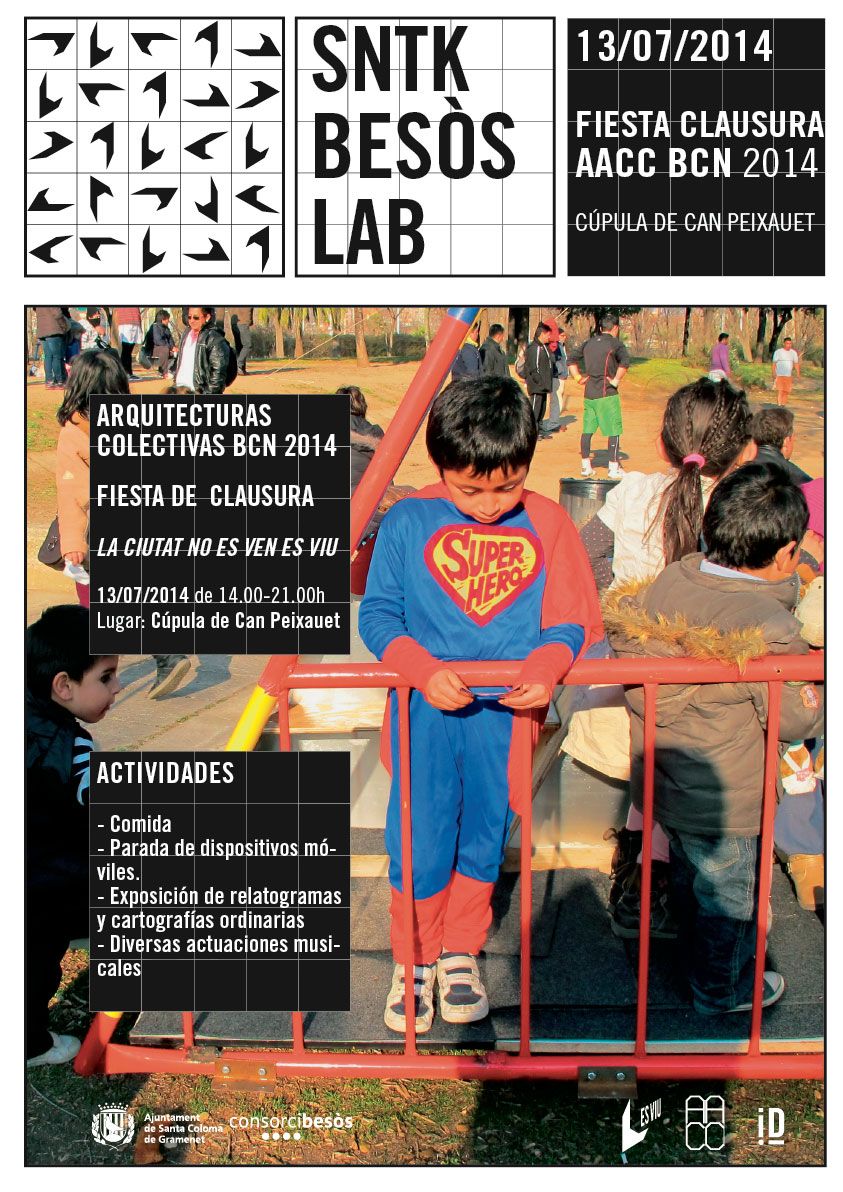 Activities part of the Collective Architectures Meeting 2014 in various locations throughout the metropolitan area of ​​Barcelona.

Friday 11th July. Guided tour of different zombie spaces generated by urban processes on the banks of the River Besòs. Zombie Spaces is a project of analysis and promotion of collective proposals within a specific area, which, by the confluence of several complex and often unrelated circumstances, define a landscape which is put together in an ill-fitting way. Idensitat is conducting this project as an exploratory programme regarding urban areas undergoing a process of zombification.

Lunch and closing festival of the meeting of Collective Architectures
This closing festival of BCN 2014 AACC meeting will showcase mobile devices, present a narrated summary -Ordinay Cartographies- of the week's activities at AACC, and will feature various musical performances. 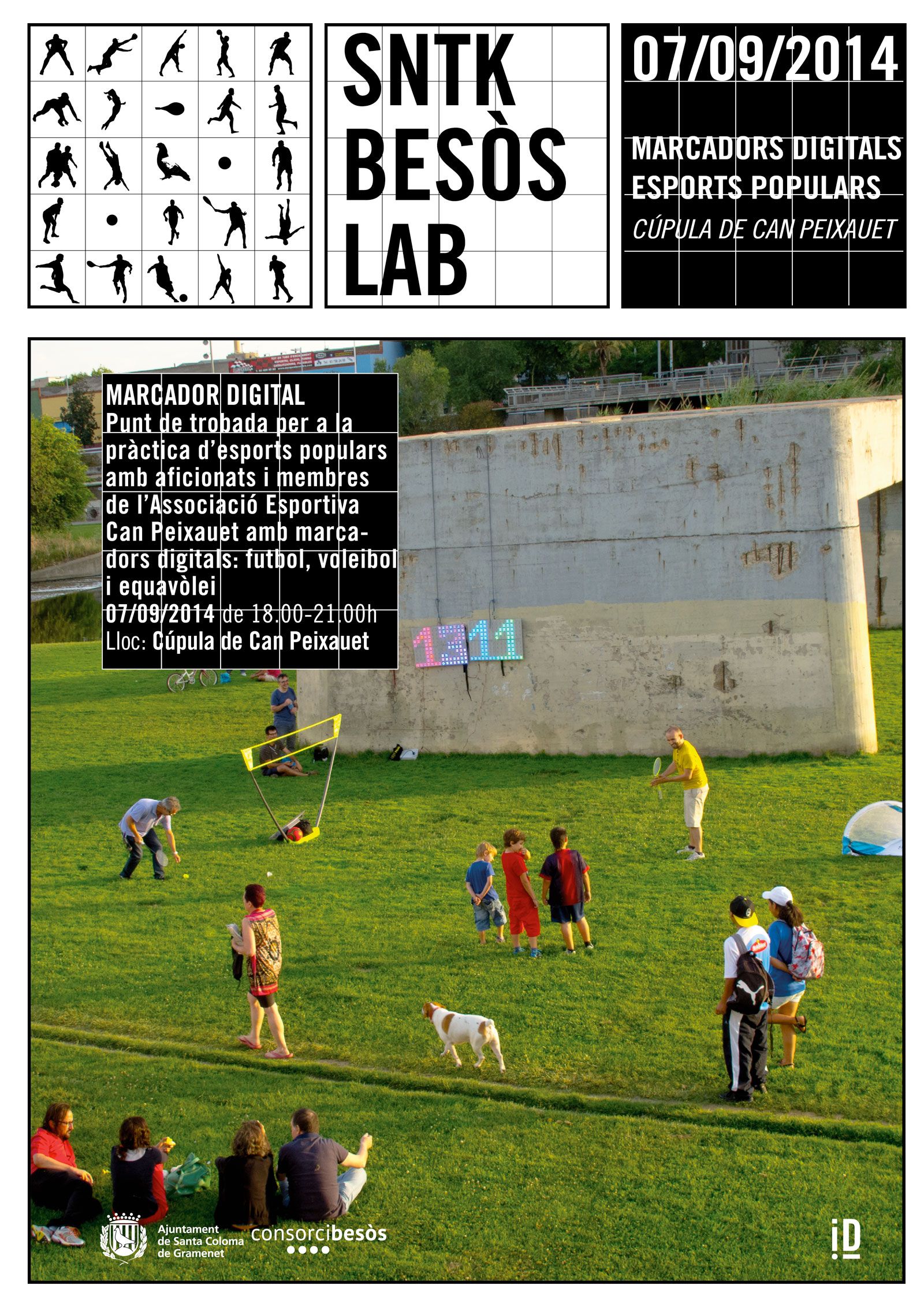 A Digital ScoreBoard for recreational activities in Besòs river space. The device contributes to generate spectators in informal sporting practices. Works with an application for Android mobile phones, and may be adapted to different activities. 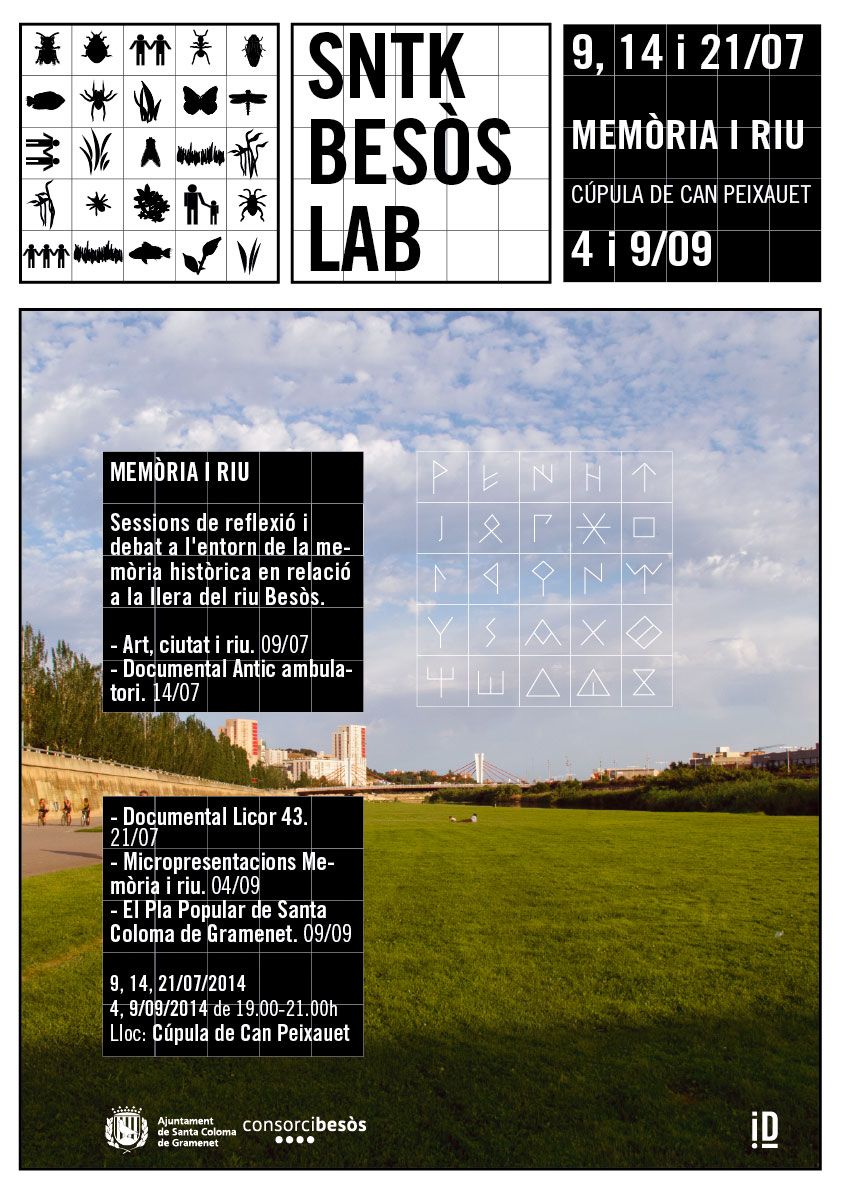 MEMORY AND THE RIVER

Five sessions of reflection and debate upon historical memory in relation to the river Besos.
Along with other initiatives undertaken by the Forum Grama, there will be three talks on the history of Santa Coloma linked to the river and focused mainly on these issues:

DESIGN WORKSHOP AND GROUP CONSTRUCTION OF A MOBILE DEVICE

Design workshop and group construction of a mobile device incorporating analogue and digital elements, to interact with the urban social context. A project by Makea and students of Postgraduate in Design, Art and Society at Elisava
Days and times: 14th to July 18th, from 10 am to 8 pm
Location: Can Peixauet Dome

Display of the finished mobile device, as part of the Festival of Santa Coloma
Date and time: 4th to 11th of September from 7 pm to 9 pm.
Location: Can Peixauet Dome

MAKEA is an alternative to the culture of the "disposable". MAKEA is a brand which promotes products generated by intelligence and collective creativity, converting items overlooked by consumer society into useful products once again. Makeatuvida is a non-profit cultural association which encourages social, artistic and educational promotion of creative recycling, and which works towards environmental awareness regarding issues surrounding waste in our society. 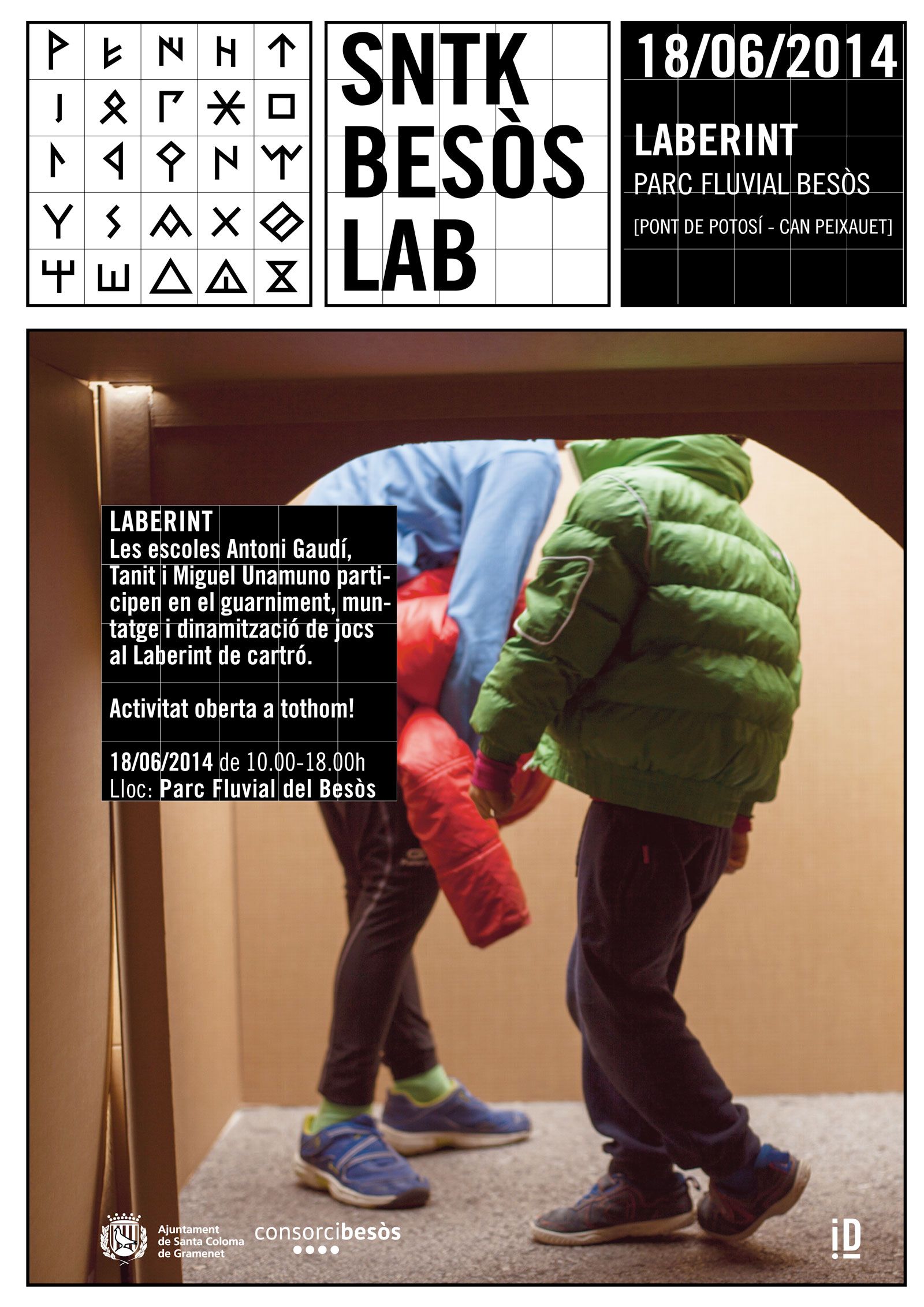 During end-of-term activities in the years 2013 and 2014, the schools Antoni Gaudí,Tanit and Miguel de Unamuno participated in a graphical intervention, exhibition and games activity at the Cardboard Labyrinth .
Date and time: June 18th, from 10am to 6pm.
Location: Parc Fluvial Besos, under the pont de Potosí - Can Peixauet