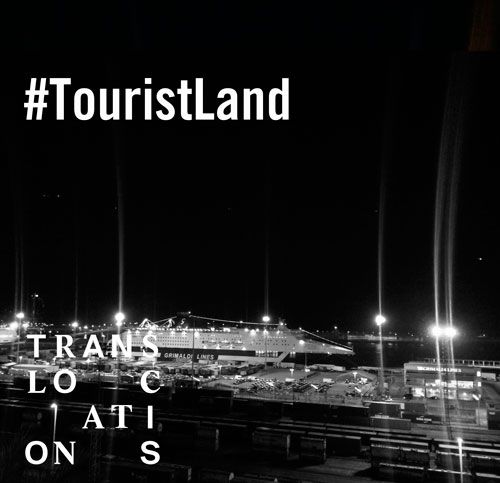 Public debate project about the relationship between local - visitor in the context of Barcelona.
[Territori Guiri means Tourist Land]

The hashtag #TerritoriGuiri in Twitter serves to collect opinions, phrases, ideas contributing to a public debate on the phenomenon of tourism in the context of Barcelona. The intention is to analyse the relationship of conflict created by the
mass tourist industry in the daily life within the locality.

Phrases are broadcast from Media Quiosc space in Arts Santa Monica using a luminous device which emits sentences collected in real time. The set of sentences is also compiled on this website. There is a parallel collection of texts and references to create an archive on the topic.

This section contains some articles and texts on the relationship between the local and the foreign. Policies, proposals, criticisms, or any expression of those tensions or benefits arising from different forms of contemporary mobility which impact upon a specific geographical area.

Here a short summary adn the link to the whole text.

- We’ve all been a tourist at some point, but citizens of this great city are fighting for a way of life as they are sidelined by the authorities
- Neighbourhood communities are central to the culture of southern Europe. They are where life happens. Yet people who live in areas popular with tourists are at risk of being forced out, by speculators who raise the rents of apartments and shop premises in pursuit of the tourist market.
- The tourism crisis in Barcelona is further proof of the emptiness of the promises of neo-liberalism that deregulation and privatisation will allow us all to prosper.
- The way of life for all Barcelonans is seriously under threat.

- Some Barcelonians of the 7.4 million visitors to a city of 1.7 million: 'we don't want this kind of tourism anymore'.
- With the increased arrival of cruise ships into Barcelona port, estimates put the passengers' total spending at €3.5m (£2.8m) during the day; a figure that had local shopkeepers rubbing their hands in anticipation after being granted special permission to keep their shops open on a Sunday.
-"This is not a city to live in. It's a theme park like Prague or Venice," residents tell. It is a nightmare to live in the historical centre.
- The number of bars and restaurants in the city centre has tripled from 200 to 600 in the last seven years, sending the number of residents in the area dropping by 10%.

Barcelona: A victim of its own tourism success? | Ian Mount March 2015
Article in fortune.com

- Like many European cities, from Paris to Prague to Venice, Barcelona has bet hard on tourism. And it’s now paying a price for its good fortune.
- According to government figures, between 1990 and 2013 the number of annual visitors who stayed overnight exploded from 1.7 million to 7.6 million, and the number of hotel rooms grew from 10,265 to 37,069.
- But now many locals are asking, how much tourism is too much?

- Around 8 million people are expected to visit Barcelona in 2015.
- Last year Barceloneta erupted in spontaneous protests as thousands of furious residents organized protests against the “drunken tourism” they claimed was making life in the once-peaceful neighborhood impossible.
- According to Sergio Arnás, a lifelong resident of the neighborhood and spokesman for La Barceloneta Diu Prou (Barceloneta Says Enough!) campaign group that organized last summer’s protests, little has changed and further protests are almost inevitable.
- Across Barcelona there is unease at the influence of so many visitors. In each neighborhood the specific complaints vary, but the cause, everyone seems to agree, is the mass-tourism model adopted by local authorities more than two decades previously.

To oppose mass tourism and its devastating effects does not mean opposition to tourism.
- The problem is not tourists, but that there are only tourists.
- Tourists are also victims of urban speculation and spectacularisation of the city.
- Locals often tend to subject tourists to derision, to con them, to treat them as creatures lacking in sensitivities of judgment or commonsense or good taste, to exploit and lie to them.
- Touristophobia, considered as a variant of xenophobia, "a sublimated racism which lets 'progressives' be racists without calling notice to the fact".
- Defence of tourists as helpless, hopeless creatures, just like the rest of us.

- The deterioration of civic sense. The increasing number in the population who cry out for the criminalisation and punishment of marginalised citizens.
- Those who reject the foreign, in addition to rejecting the foreigner, usually fall back on “cultural” arguments.
- Culture as a convention, which consists of giving up part of individual freedom, in order to live together and coexist.
- Eradicate foreign ways of life; this way of thought, along with other racist doctrines, is extending across Europe with a passion.
- The free circulation of knowledge, in opposition against bigotry and racism. Culture as a melting pot of diversity and a tool for social transformation.

Commercialisation of public space.
- Conflict between the combined vision of urban planners, governments and economic powers, and the citizen.
- Re-politicisation of the concept of public space on a public stage characterised by conflict.
- Analysis of strategies of reconstruction of the Ciutat Vella in Barcelona, according to their governments.
- Examples of citizen resistance for the recovery of public space.

A debate Blog about the conflict regarding tourism started in Barceloneta in August 2014. The author raises a few initial controversial thoughts, differentiating between tourists, travellers and visitors. He expresses his visceral aversion against "tourists", and adds a few considerations after his observations.
- Tourists: They move as one mass, staring at whatever is in front of them without seeing it, lacking any will to explore or to find out anything new. "The timetable is the timetable" or "the party is the party".
- Travellers: they crave the experience of the journey for its own sake. They only stay for a few days, and explore the city more or less autonomously.
- Visitors: juice the city and search out what makes a city unique. They tend to come back to destinations.
- Airbnb: A platform for collaborative tourism? Are you ready to face problems with the neighbours from their "rental flats"?

A report, with the participation of Carolina del Olmo, Jorge Carrión and Andres Martínez de la Riva, upon tourism, sustainable tourism and urban processes.
- Can there be a good way to integrate tourists within cities?
- Tourists are not the only ones in this game, citizens' attitudes also matter.
- Public space must be shared.
- Aversion to the consequences which tourism generates, and not to the tourists themselves.
- Tourism is a form of consumption, and as such, it seems absolutely inevitable that it will be voracious and destructive.
- In the face of the invasion of contemporary mass tourism, to risk either apartheid or confrontation seems to be no solution at all.
- There must be coexistence between locals and tourists. Common spaces must be reclaimed, and communities damaged by an unbalanced ecosystem, restored.

TRANSLOCATIONS is a proposal by Idensitat with Arts Santa Mònica through artistic practices and theoretical reflections, makes reference to means of mobility, transient populations and their involvement within local areas