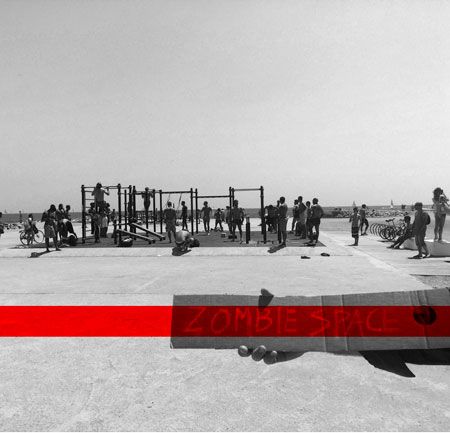 It is part of the exhibition CIUTAT DE VACANCES (Venice, Palma de Mallorca, Barcelona and Alicante)

This project is presented through two concrete elements, a glossary and a set of images taken in two different contexts.

The Glossary of zombie spaces is a list of concepts attempting to explain the actions, phenomena or circumstances which contribute to the processes of zombification of spaces. This glossary places special emphasis on the relationship between spaces of mass tourism and zombie spaces. These concepts have been iconised and connected to real spaces in the context of Palma de Mallorca, based on ideas of seasonality or temporariness.

SEASONAL SPACES | PALMA DE MALLORCA. Overcrowded and overexposed places which become semi-abandoned and lethargic spaces, and which are repeatedly reanimated in short cycles. They experience a lack of definition, a transition between some-place and no-place.

SEASONAL URBANISM | BARCELONA. Places close to the coast which are in the process of touristization. Peripheral areas not yet exploited or overexposured in process of reurbanisation. After a standby period appears new renders, fences and machines that demonstrates the end of its standby or torpid time.

IMAGES. The images display a selection combining places, the routes followed in order to access them, geolocation information, and some iconic elements referring to actions, phenomena or circumstances which contribute to processes of zombification of spaces. The geolocation of each of the selected places shows a space, and a specific time. In each of them, different zombification factors have been summarised, in a more or less evident way, and in a marginal temporal period, in relation to the massive presence of tourists in these spaces. 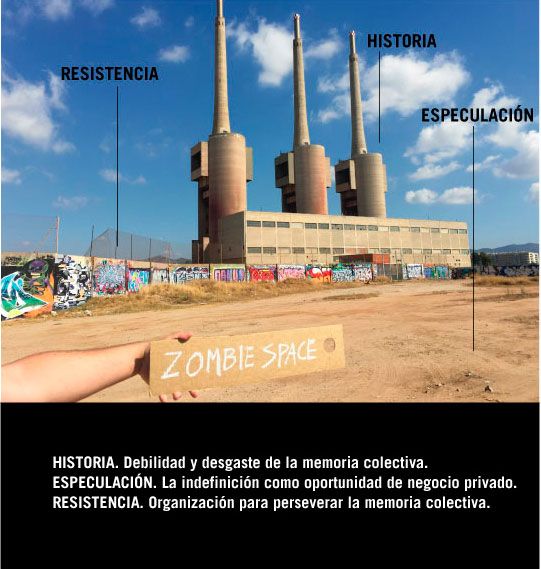 ZOMBIE SPACE. Zombie space is defined as one generated by fragments of urban planning which never did fully materialise. It is a place that lives - not dies – in a state of dislocation, despite various attempts to prefigure it as a joined-up thing. It is a space where various distorted life forms are reorganised. Zombie spaces occur due to factors such as the logic of property speculation, a public administration conditioned by private interests, repeating models which have been badly adapted, a paralysis of initiated works, the appearance of new activities which displace previous activities, a disconnection with the historical processes of the place. They trace out vast urban landscapes which continue to function, despite the disfigurements produced by the will of many individuals or institutions, to give spaces a life designed by, and for, interests foreign to the dynamics in the territory.

ZOMBIFICATION PROCESS. In this process, factors such as proximity and neighbourliness live side by side with a situation of spatial use and abuse. Tourism as a contributing element in zombification, due to its voracious consumption of space, its fictionalisation, dysfunctionality and temporariness. Spaces squeezed by translocal capitalism, subject to extreme competitivity, deregulattion, and a lack of clear rules.

GROUND ZERO. Place where a maximum concentration of zombifying elements coexists. High density of operators with their own interests, confluence of spaces for fast consumption, centralisation of biters. Thematisation of spaces, accumulation of routes, condensation of mass tourism.

BITERS. Agents which model spaces on the prioritisation of benefits. They arise around property speculation, corruption, or other extractive activities wearing the camouflage of various jobs such as tour operators, cruise operators, estate agency, hotels, and the like.

SEGREGATION. Disassociation between spaces and the people who inhabit them. Zoning and specialisation, disconnection between activities. Conversion of spaces of production (industrial and manual) into spaces for leisure, commerce and consumption.

MARAUDERS. Spaces to hang around, walking aimlessly and the consumerist derive. Places affected by the accumulation of visitors which obstruct the daily traffic.

TEMPORARY ALTERNATION. Spaces occasionally and cyclically occupied. They lack their own life, and must be reanimated in order to appear alive. Spaces subject to the consequences of arrhythmic activity, between overstimulation and maintenance of zero degree.

OVEREXPOSURE. Souvenirs, pseudo-local products, natives, decorative elements which appeal to traditions, proliferation of kitsch, miniaturisation of spaces. Local inhabitants as extras, and daily life exposed to the gaze of the mass of tourists wandering.

OVERVALUATION. Places where the selling price or rental of housing is inflated due to the effects of the biters' continued actions. It produces an effect of displacement of the premises, and contributes to the temporary occupation of spaces.

SEASONAL SPACES. Overcrowded and overexposed places which become semi-abandoned and lethargic spaces, and which are repeatedly reanimated in short cycles. They experience a lack of definition, a transition between some-place and no-place.

SEASONAL URBANISM. Places close to the coast which are in the process of touristization. Peripheral areas not yet exploited or overexposured in process of reurbanisation. After a standby period appears new renders, fences and machines that demonstrates the end of its standby or torpid time.

CIUTAT DE VACANCES has been displayed in various exhibitions held in Venice, Palma, Barcelona and Alicante. The projects presented had been produced in the contexts of these cities. The authors and projects made are: 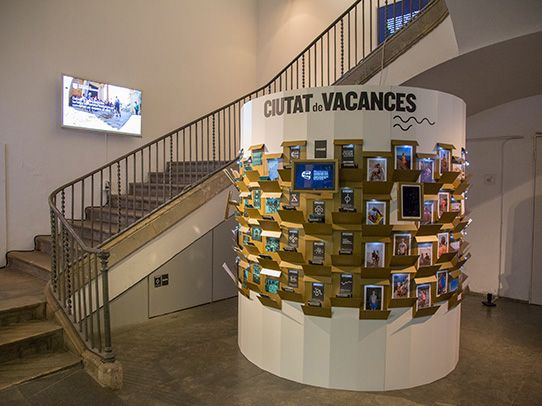 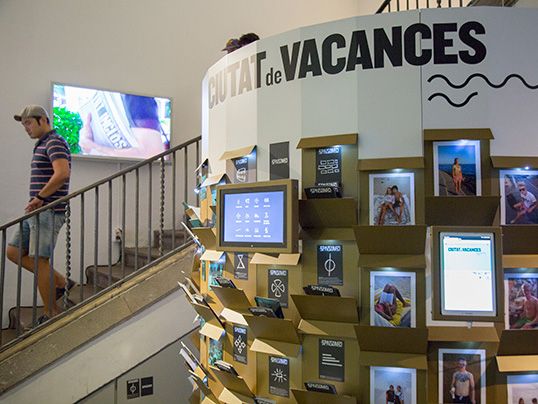 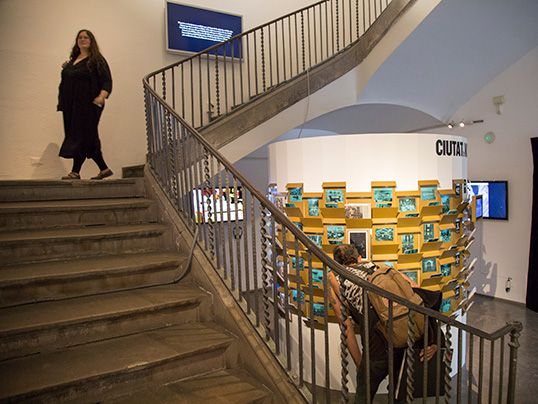 Video by Es Baluard for the exhibition "Ciutat de Vacances". May - September 2017.