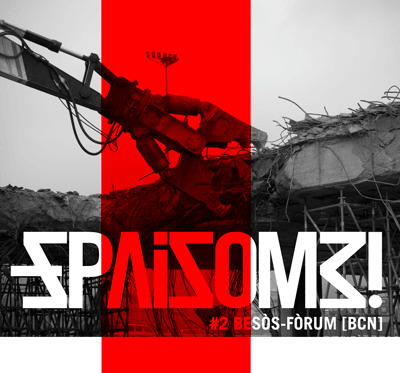 Idensitat is carrying out this project as an cycle of exploration in urban areas which are undergoing a process of zombification. The project adapts to each site, coming together in several interconnected stages, each of which is open to general public participation, but which may be approached separately. It combines a walking tour, a guided exploration with agents active within the specific context, a screening of prepared audiovisual material, and the development of a workshop in which various people who have analysed the site, or who are carrying out activities related to the project, will take part.

A series of presentations, and a debate, forming a discussion of the morphology of zombie concepts applicable to space, contrasting these with the processes of transformation which the landscape between the Besòs area and the Barcelona Forum has suffered, from the perspectives of everyday life and the environment  .

> Go to the aplication form for debates sessions. Free acces with previous inscription. Places are limited.

The workshop consists of exploration and analysis of the landscape from Besòs to the Forum from the perspective of the zombie spaces concept, as well as the development of a multidimensional structure combining data, mapping and representation of the zombie morphology found in the analysed space. This structure will gather together the individual or collective contributions of each participant in the workshop.
The results of this multidimensional mapping could be displayed in an exhibition organized by Idensitat for the next May 2015, in Barcelona.

WHO IS IT AIMED AT
Workshop for artists, architects, audivisual producers, anthropologists, urban geographers, sociologists, art historians, and students of these disciplines, as well as anyone interested in the proposed area of study.  Places are limited.

Sito Alarcón Puerto. Manager at the Consorci del Besòs. He has worked in Barcelona Regional, where he directed and coordinated various studies, among them the proposed restoration of the final stretch of the Besòs river, various projects linked to Barcelona Zoo, the remodeling of the coastline bank of the Besòs river, and other works pertaining to urban planning and renewal. He participated in drafting the Plan Territorial de la Región Metropolitana de Barcelona, and previously worked at the Mancomunidad de Municipios del Área Metropolitana de Barcelona, in metropolitan coastal management, and on plans regarding the rivers Llobregat and Besòs.

Pau Faus. Architect and visual artist. An explorer of everyday urban life, he is mainly interested in autonomous practices within the contemporary city. His work aims to activate mechanisms of representation, narration and/or interaction in order to highlight the particularities and conflicts of wherever he settles down to work. Most of his projects are ‘site specific’, in collaboration with local agents and other professionals such as architects, photographers, anthropologists or visual and performing artists.

SÍ SE PUEDE. Seven Days at Barcelona PAH' produced by Comando Video (52 minutes / Spanish with English Subtitles). The PAH (The Platform for People Affected by Mortgages), it is a citizen’s movement for the right to housing. It emerged in 2009 in Barcelona (Spain) and today has more than 200 nodes across Spain. The PAH offers an alternative outlook on housing policies to the one offered by local and national governments making this social movement a key opponent of their housing policies, which have only impoverished people while continuing to commodify houses.
The documentary ‘SÍ SE PUEDE. Seven days at PAH Barcelona' is an account of the day to day of Barcelona‘s Platform for People Affected by Mortgages. Following various participants it illustrates what a usual week looks like and its tireless activities. This documentary places cameras at the heart of the PAH to visualize, not only the post-housing bubble drama, but also the huge and often invisible work behind this social movement. It shows the process of transformation and empowerment of those who join its ranks.

Francesc Muñoz. Professor of Urban Geography at Universitat Autònoma of Barcelona from 1995 and director of the Urban Planning Observatory, Autonomous University of Barcelona. He is director of the university’s Urban Planning Observatory. A specialist in urban structuring, urban planning and design of territorial strategies,  he has participated as an expert adviser to Council of Europe missions in this field. He has also been a guest lecturer at universities in other countries, for example France, Italy and the United Kingdom. He has studied the present-day transformation of urban and metropolitan landscapes and has published texts in France, Italy, Portugal, Slovenia and the United Kingdom,

Octavi Rofes. Anthropologist, Professor of Art, Design and Society and Design of Identity Elements at Eina, University School of Design and Art. He has performed ethnographic research in local cultural production, and has recently become involved in analysing creative processes among networks of interpersonal relationships.

Domènec. Visual artist. Taking conceptual processes of reflection as his point of departure, Domènec has built up a body of sculptural and photographic work, as well as installations and interventions in public space, which take the architectural project as one of the most productive and complex imaginary constructions in the modern tradition. He has taken part in several in situ projects and international public art projects in Ireland, Mexico, Belgium, France, Italy, USA, Brazil, Argentine, Finland, Slovenia, Israel and Palestine.

Francesc Magrinyà. Civil Engineer at the UPC and Doctor of Urbanism at the ENPC Paris I. He was head of mobility department at the Urban Ecology Agency of Barcelona. He is an expert in participatory urban planning processes, and a teacher in several UPC Masters degree courses and Doctorates in Sustainability and Transport Infrastructure Engineering. He is the research coordinator of the EXIT-UPC  group (Engineering, Networks, Infrastructure and Transport), and is head of the Department of Urban Services GRECDH-UPC (Research Group on Cooperation and Human Development), as well as Coordinator of the Intrascapelab Collective.

David Picó. Educator and facilitator for projects in social education and ICT in Unión Group at  La Mina for over 12 years. He focuses his work on the understanding that processes of appropriation by people of ICTs are essential for the (re) construction of social spaces. (desdelamina.org)

Diana Padrón. Graduated in Art History and Master in Advanced Studies in Art History at the University of Barcelona. She has led conferences at the University of Barcelona, Escola EINA, Arts Santa Monica, University of Vic and  Universität für Musik und Darstellende Kunst  Wien. She collaborates with such contemporary art journals as SalonKritik, Interactive, A*Desk and  REG|AC  (Journal of Global Studies and Contemporary Art). She also works as an independent curator. Since 2011, she completed a research residency at the Museu d'Art Contemporani de Barcelona  (MACBA) about the Cartographic Impulse in the MACBA Collection, and has been developing her PhD project about the practice of cartography in contemporary art. Currently she is coordinator at the postgraduate seminar On Mediation, Theory and curatorial practices in  Global Art, organised by the Art Globalisation Interculturality research group, University of Barcelona.