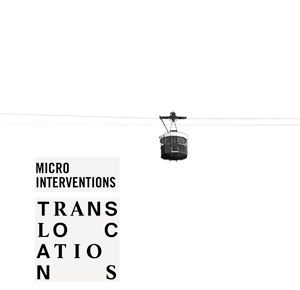 A MICROINTERVENTION is a specific action, a process, an ephemeral intervention in space, a small involvement with a site, a collaborative activity, a formalisation adapted to context, an idea coming together to present a new perspective, a macro-intervention on a small scale, the visible display of a collective interest, or any project which affects the relationship between local and visitor.

MICROINTERVENTIONS KEY FEATURES
Chosen though an open call, the selected projects consist of a work of production based upon a connection between the specific contexts of the Raval and the Gothic Quarter, and elements or subjects of contemporary mobility (translocal) such as tourism, migration, or everyday journeys for work reasons-commuters-.   - Projects make a timely impact upon the context, reflecting aspects conveyed by a critical perspective, or to generate work processes from interactions in public space.  - Projects and processes are linked to individuals or neighbourhood groups which deal with any of those issues defined as translocal - Most of the projects adopt a multidisciplinary perspective.

MICROINTERVENTIONS KEY OBJECTIVES
- To connect with spaces within the city, to promote appropriation and knowledge, and to raise awareness of citizen networks for the transformation of public space.
- To enable the development of creative projects linking with local action.
- To encourage creative strategies providing temporary revitalisation of, and transformation in, the use and experience of the city.
- To promote artistic interventions which connect to civic networks.
- To promote experiments and actions carried out in specific public spaces within the Raval, the Gothic Quarter and the Port of Barcelona.
- To encourage work which connects local questions to elements relating to mobile populations.

FINALISTS
Title: THE ARTIST AND THE STONE
Authors: Giuliana Racco and Matteo Guidi 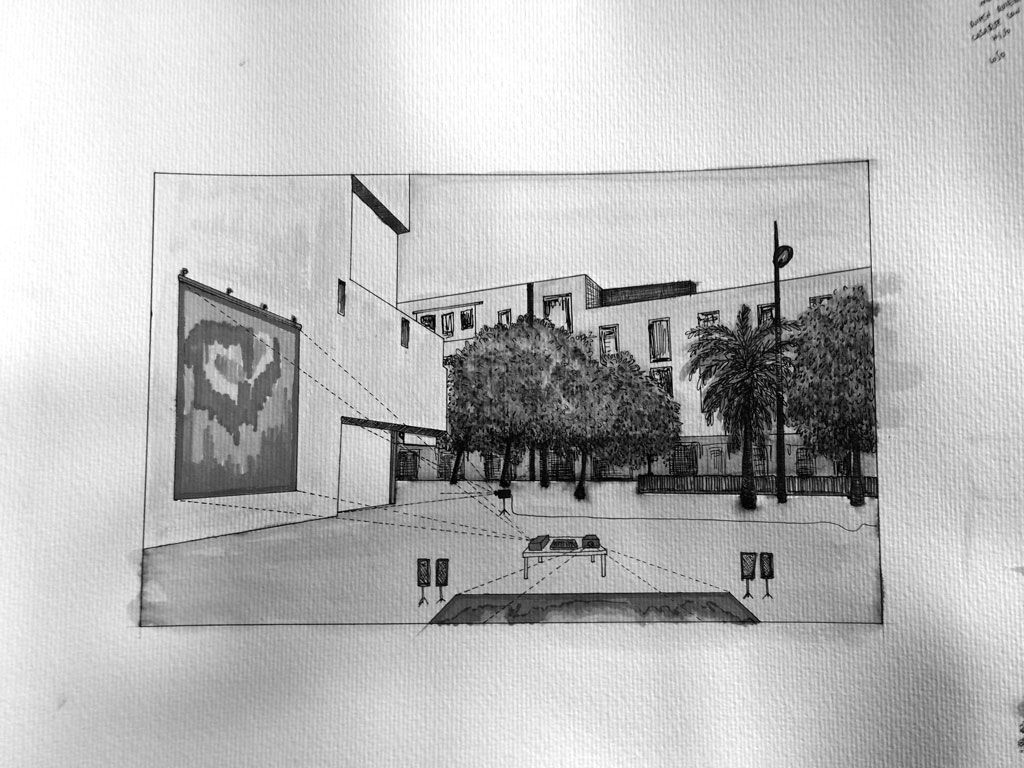 TRANSRAVAL. Brigitte Vasallo and Pol Galofre
Transraval is a proposal to create a moment of common reflection upon dialogues between places, upon trans identities,  upon the city as a body in motion, and upon new corporealities arising from the heart of communities and urban planning proposals which frame the making of the new cities. The project consists of a series of activities (screenings, debates and lectures) and a visual intervention in public space in the Raval district.

Brigitte Vasallo  is a writer, journalist, and cultural mediator. Publishes articles at eldiario.es, Píkara Magazine and Diagonal. Has participated as a lecturer in  Remapping Europe (Sevilla 2013), Amors Subversius (Sta Mònica, Barcelona 2013), and the Jornadas Transfeministas de la Universitat de Múrcia (2014). She has published the novel Pornoburka, Desventuras del Raval y otras f(r)icciones contemporáneas (2013).
Pol Galofre He have a degree in CInema and Audiovisuals from ESCAC and is a sound designer, a documentalist and an activist. Since 2006 he has been a participant in the trans movement in Barcelona. Has been part of different grassroots trans and LGTB groups. Currently is co-coordinator for the project Cultura Trans. 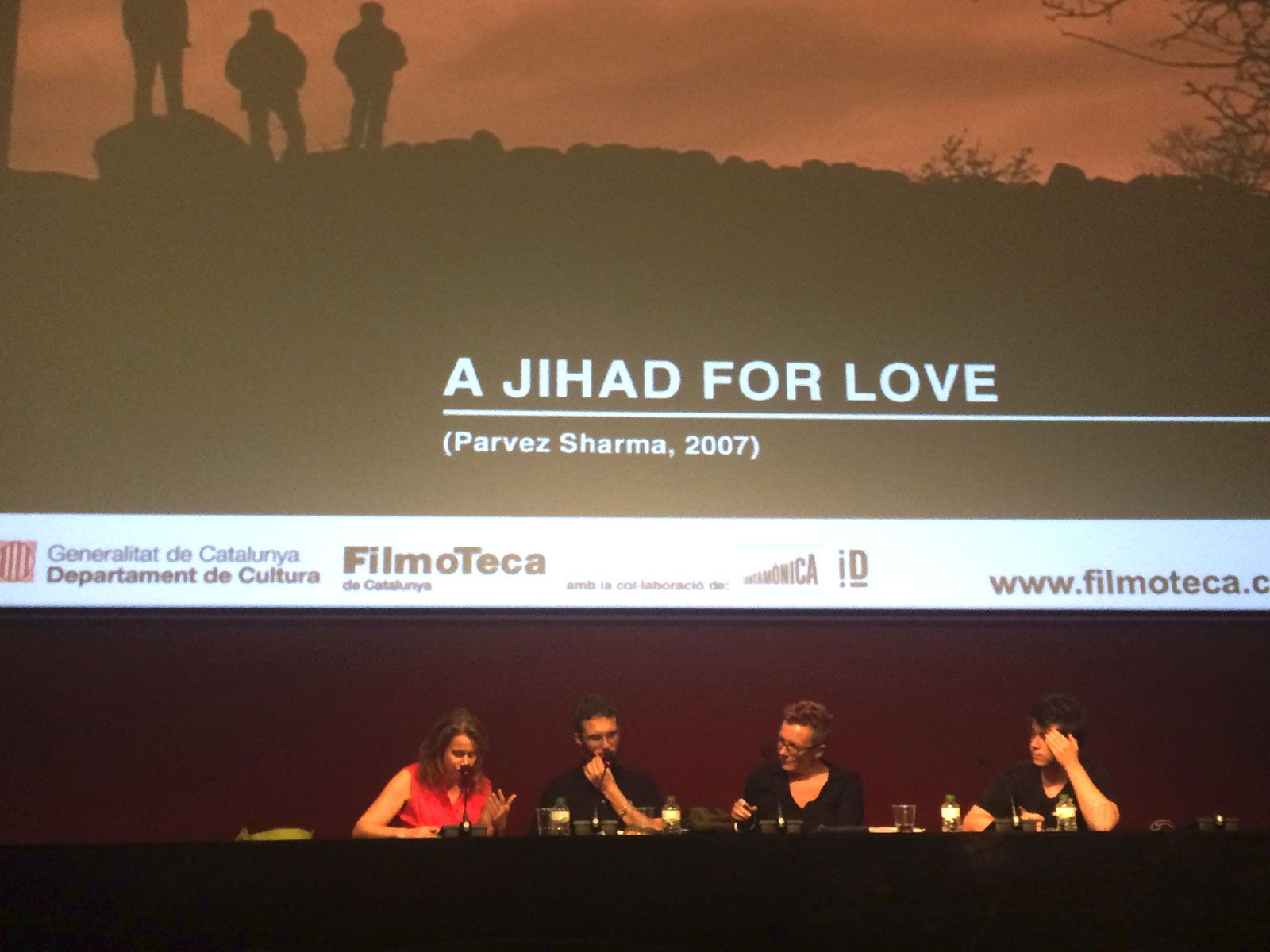 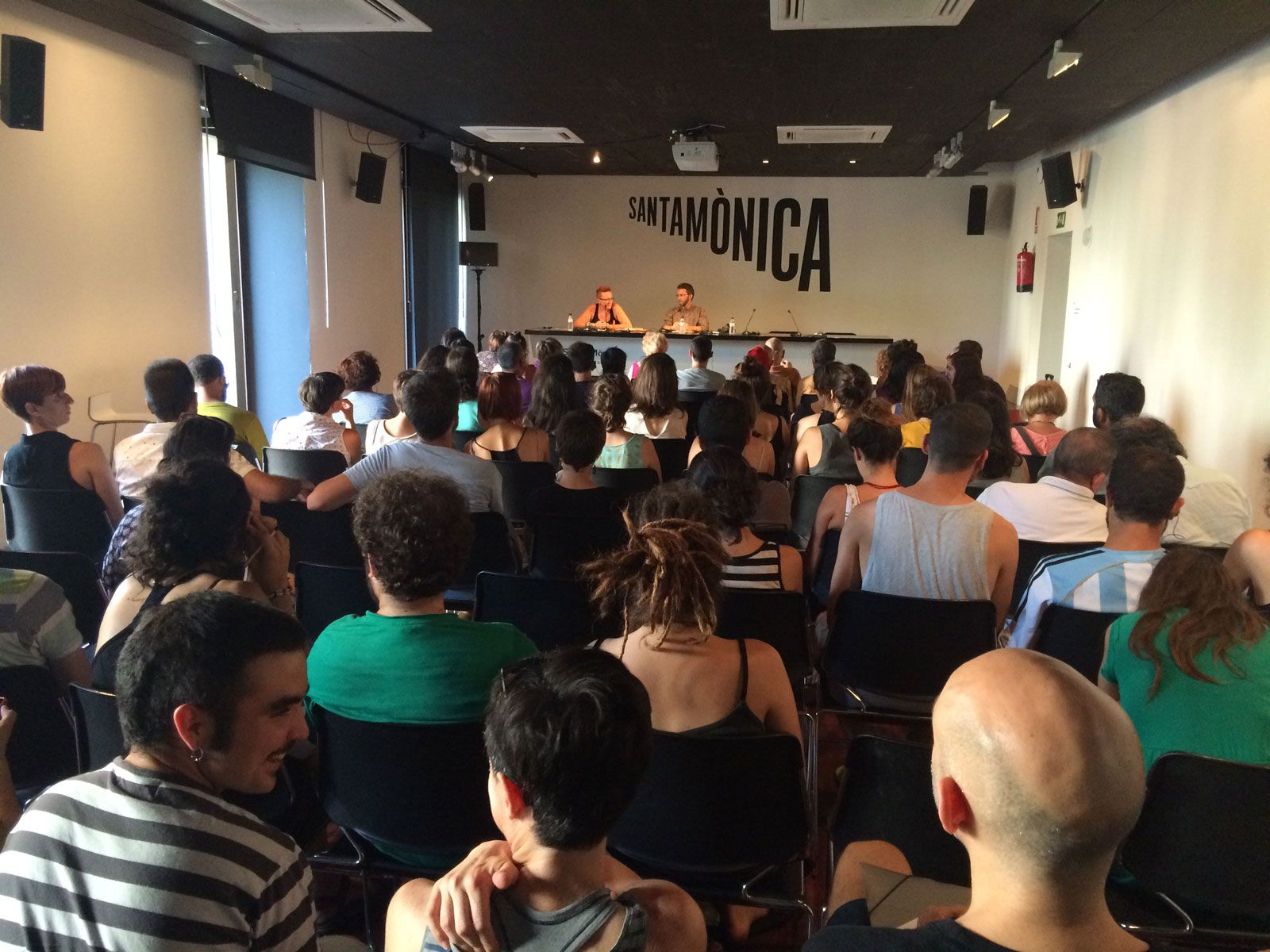 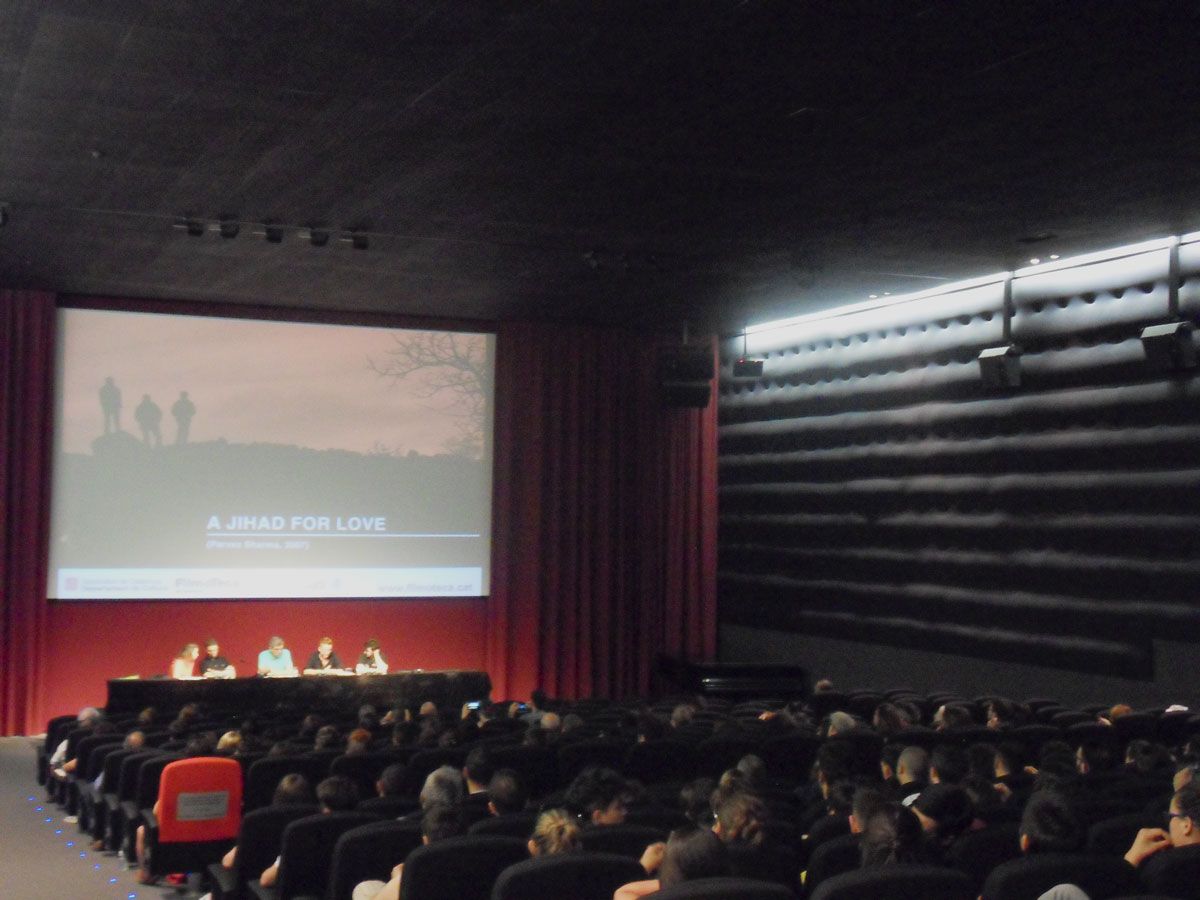 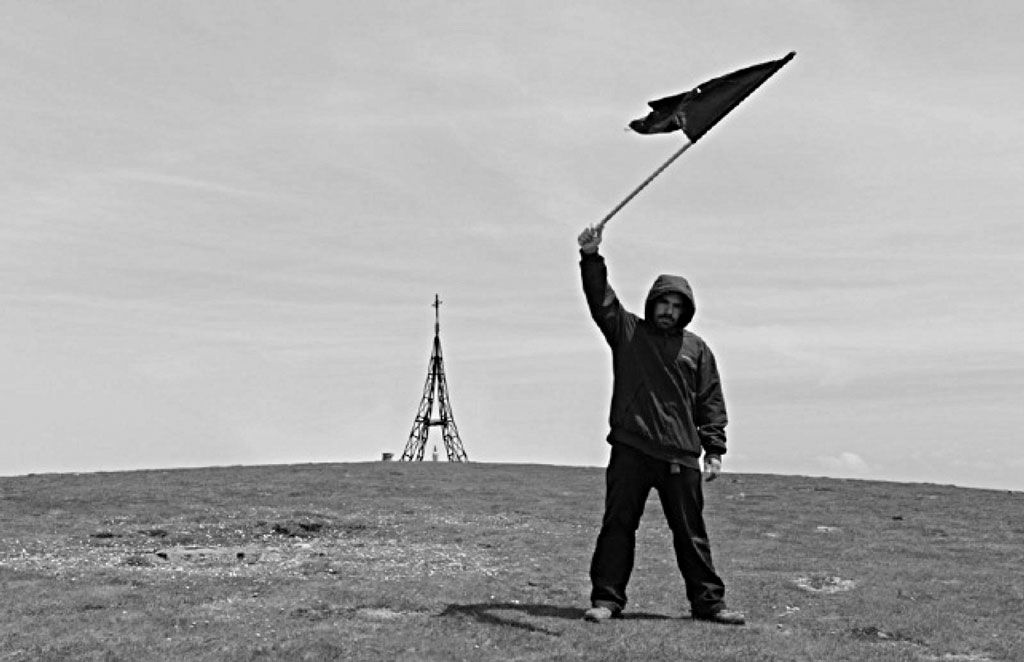 This project focuses on creating a local identity using graphic codes to establish connections with the diversity of people who live in or pass through the neighbourhood. Based on a preliminary process of fieldwork, more than attempting to create a neighbourhood, street or popular group flag, the aim is rather to communicate the confluence of different domestic attitudes from a political approach, because living in community is also politics.

The project has developed with the collaboration of the local collectives and entities: 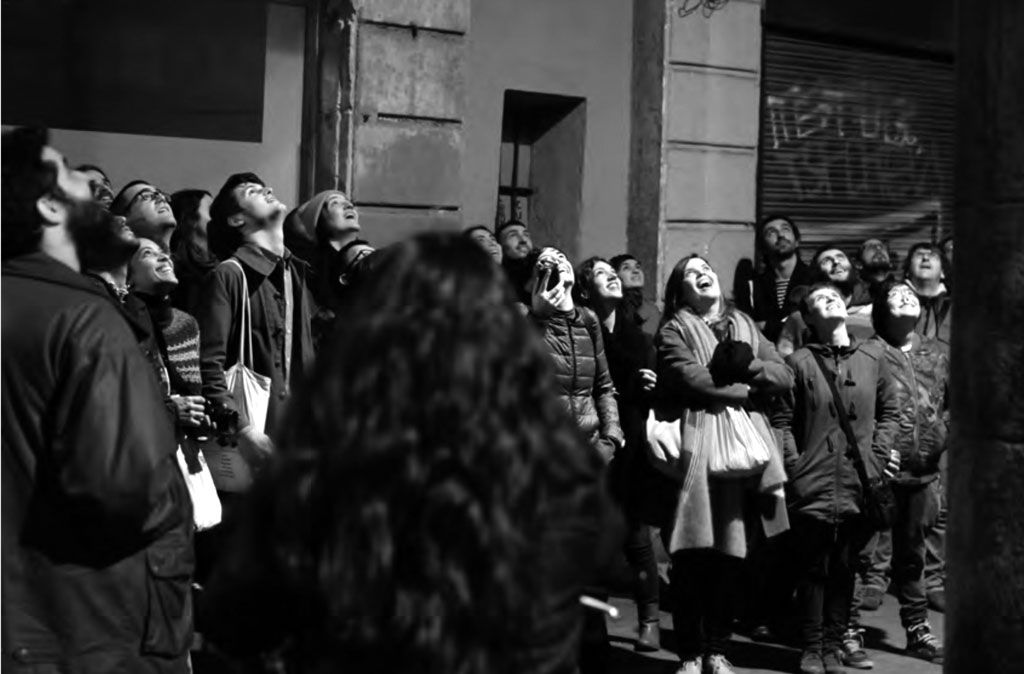 A Project designed as a social performance which will take place after a process of community work, in which the script development and the later creation of scenes [this is not quite what the original says] are constructed from day to day, through theoretical research, the exchange of experiences, and meetings between residents, artists, social activists and specific associations from the Raval. This project is orientated towards the premises of action-research: it attempts to compile knowledge and to create a sense of  community, while intervening within the locality as a common public space. It addresses the contemporary conditions of  translocation, understood as the most recent local articulation of a long history of migration flows, cultural influence and exchanges of knowledge and resources. 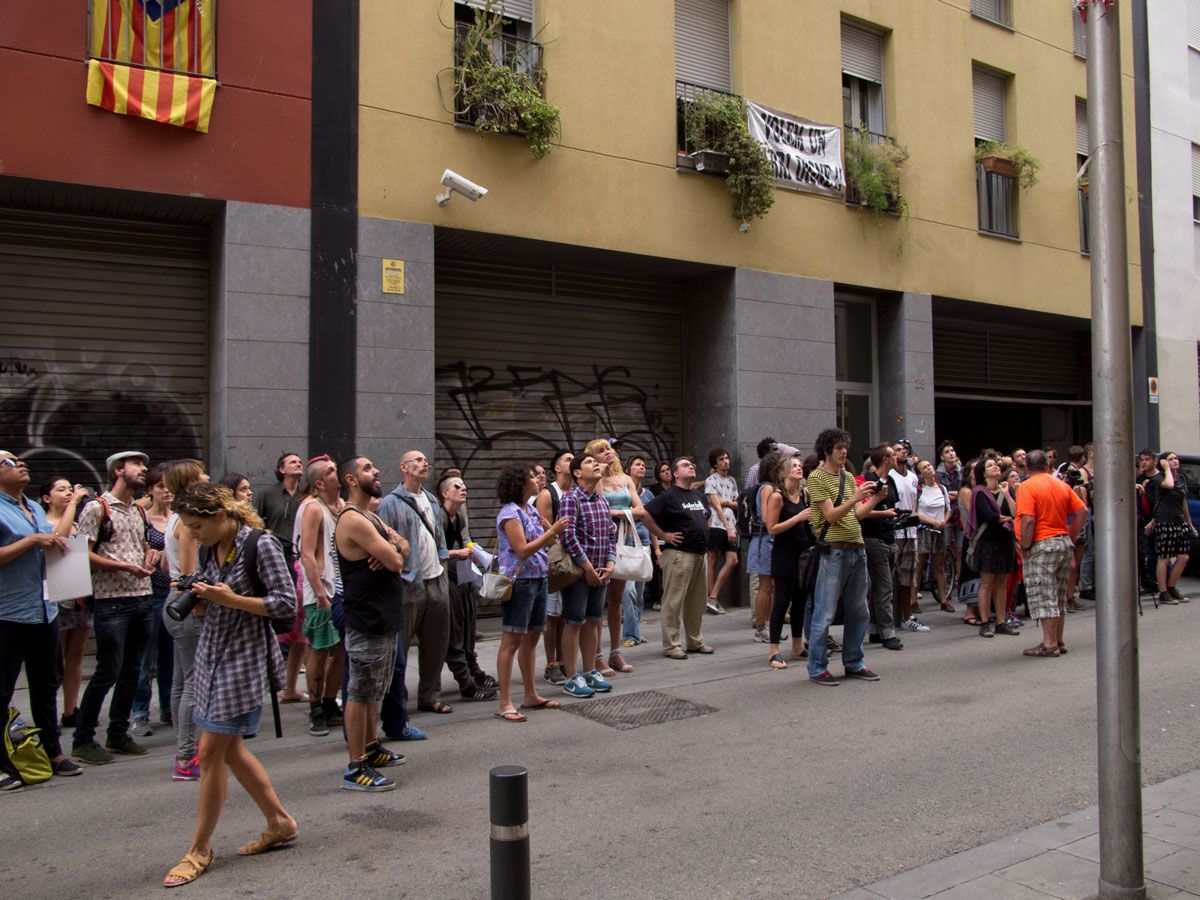 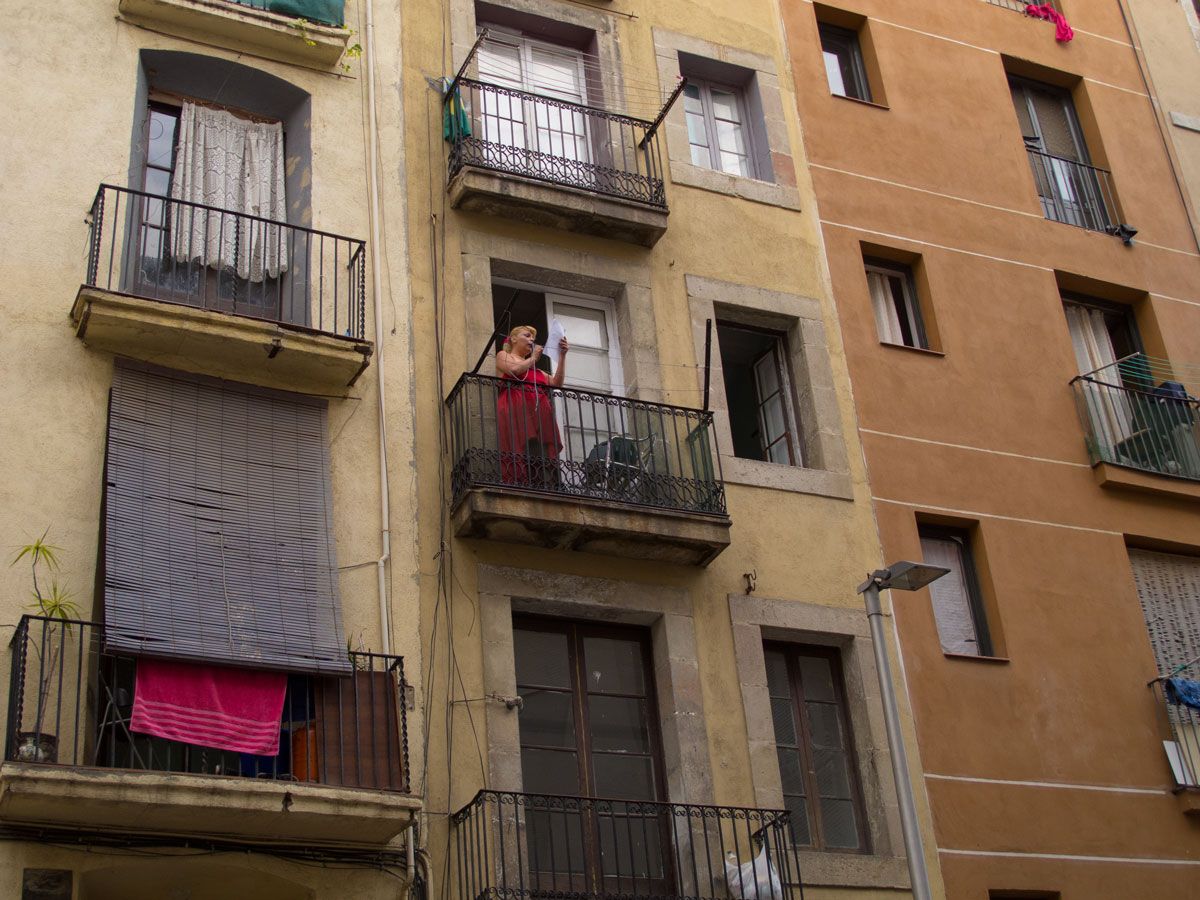 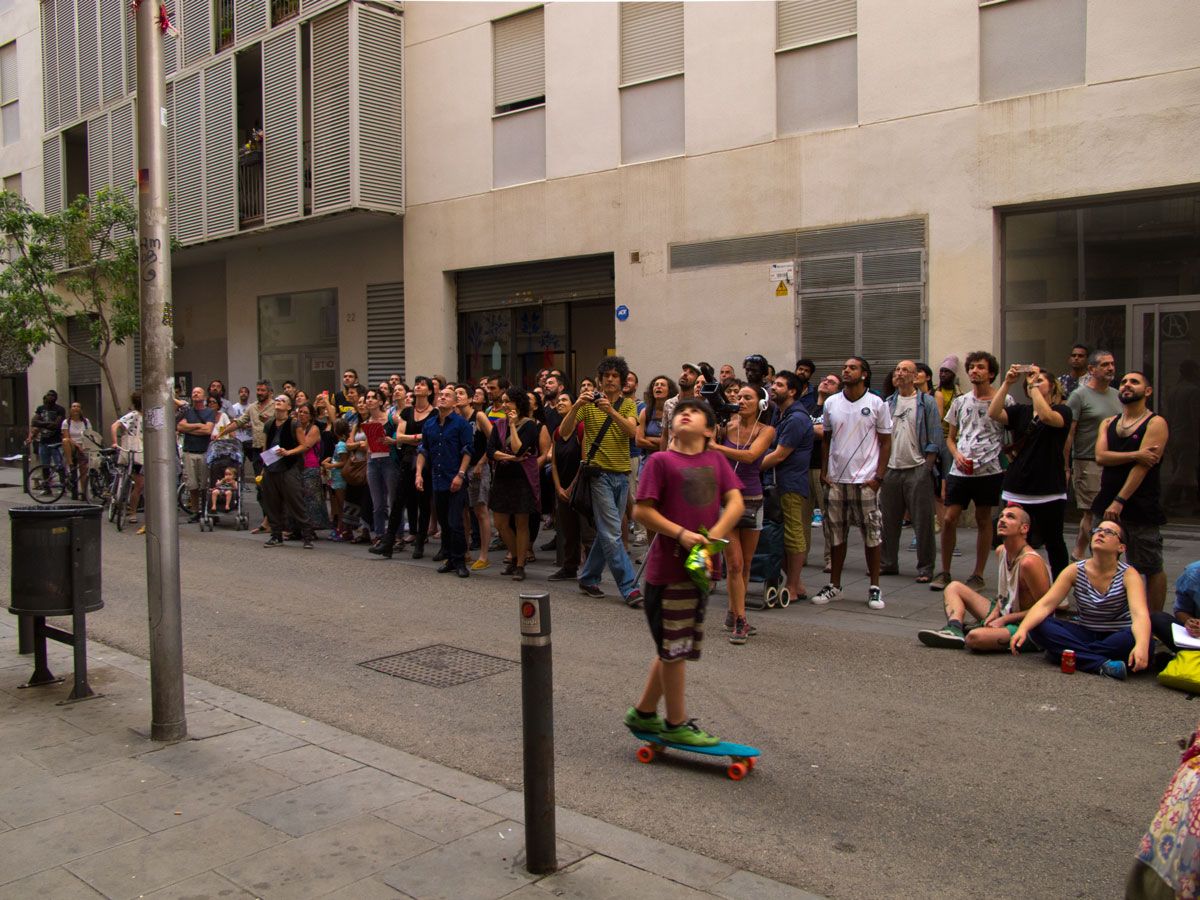 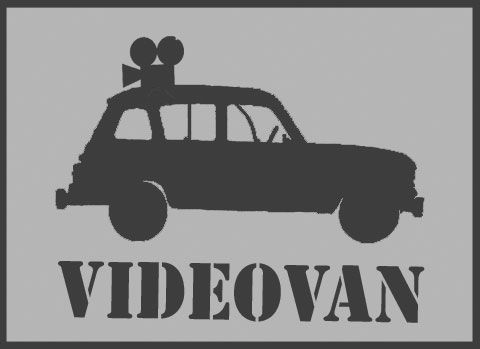 The proposed aim of this project is to deploy a travelling library with a programme of films and audiovisual curated by various organisations in the Raval district, in order to raise their own visible representation as a group in public space, within the collective imaginary of  the neighbourhood.

Ro Caminal is a visual artist whose work revolves around issues of collective identity and social space as a place to experience and to become, as the space where identity is represented and develops. Recently she has had work selected in the SAC (2014), Can Felipa (2013), Biennal Guasch Coranty (2013) and  El Contextador-CA Tarragona (2013). 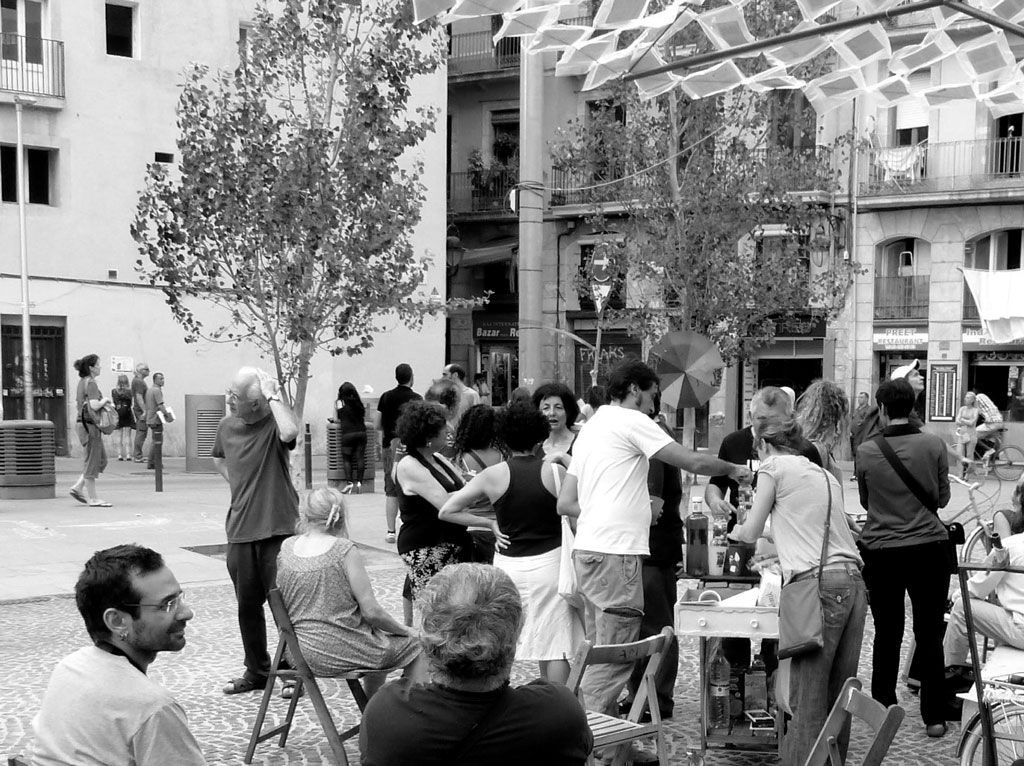 Fem Plaça arises from the action of neighbourhood resistance in the Ciutat Vella before the current land-use plan for the city, approved by the Barcelona city council without public consultation, against the opposition of the district and with no comprehensive plan to analyse the impact of this course of action upon public spaces, as this will cause urban transformation from which there is no turning back.
In this context, Fem Plaça constitutes the sum of grassroots actions founded upon the temporary occupation of public space in order to reappropriate districts, streets and squares. Occasional open meetings are being organised with the objective of creating a sense of community and trust among participants and residents in the area of the specific action. The choice of each square or city space is always connected to a specific assertion of citizen's rights.
The project which they are carrying out in the contexts of TRANSlocacions consists of a number of communications and documentation devices, recording the interventions in public space.

The collective Fem Plaça is a heterogeneous group of people from all over the place and of all ages, active and committed to the city, gathering in different neighbourhood parcs to strengthen relationships, to live and socialise in a relaxed and playful manner. 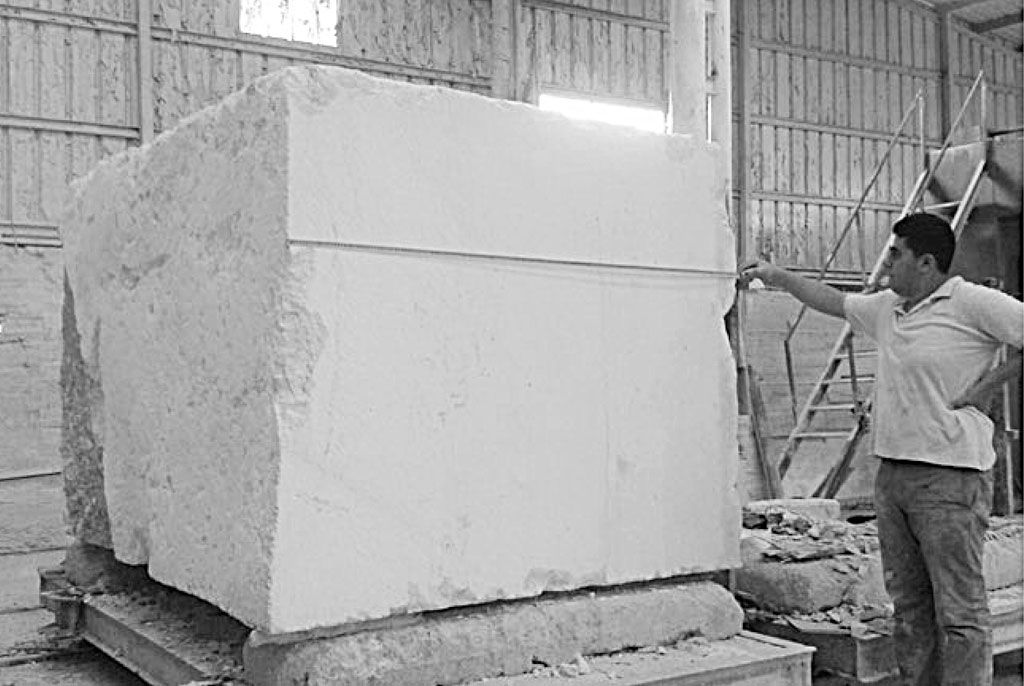 THE ARTIST AND THE STONE, 2013 - in process. Giuliana Racco-Matteo Guidi

Often migration is associated with conflicts. Mobility and immobility may be the result of armed conflict, violence or fear. Escaping or being retained somewhere, fleeing or hiding and leaving or staying are decisions that individuals can make, influenced by external circumstances. Leaving or entering a country, being a refugee in the country itself or being allowed to be a refugee in another country does not depend on an individual, but on internal laws and international agreements, the porosity or impenetrability of the borders, and the facilities that states concede in terms of movement of people and their admission to the state. The exchange of goods and merchandise and monetary transactions have different rules, which are determined by economic agreements between countries, blocks and international corporations. The Mediterranean is located on a border and is a good example of the geopolitical complexity surrounding international mobility, both of products and people. This project focuses on these questions. The Artist and the Stone is a proposal about mobility, desire, citizenship, globalisation and restriction.  It consists in temporarily moving a person; an artist, and an object; a block of stone that weighs 25 tonnes, from a refugee camp in the south of the West Bank to the city of Barcelona.

The project has been developed through various actions, in collaboration with different groups and organizations in the Raval neighborhood, with a strong educational component: Massana Arts School, Casal dels Infants del Raval and OVNI Archives. So, in the framework of the project, some actions have been done:
A series of SCREENINGS in public space, at Plaça de la Gardunya,  programmed in collaboration with OVNI Archives.
October 26:
Mapping Journey # 1 and # 2, Bouchra Khalili, 2008.
Picasso in Palestine, Rachid Masharawi and Khaled Hourani, 2012.
November 9:
Avatar Palestine. Haitam Al Katib. 2010.
Europlex. Ursula Biemann i Angela Sanders.
Happy Bithday, Mr. Mograbi. Avi Mograbi. 1999.

PROJECTING US: VIDEO WORKSHOP in collaboration with Casal d'Infants del Raval. During the first weeks of October, the team conducted a video workshop with a group of  Raval’s youngsters, working on contextual elements of the neighborhood, defining their identity and their own interests.
The short fils resulting from the workshop were presented on 11/06/2015 at the Auditorium of Arts Santa Monica.
INTERVENTION IN PUBLIC SPACE. Installation of 6 pieces of the 22T stone, brought from the Refugee camp of Arroub in PLA DE PALAU, Barcelona. 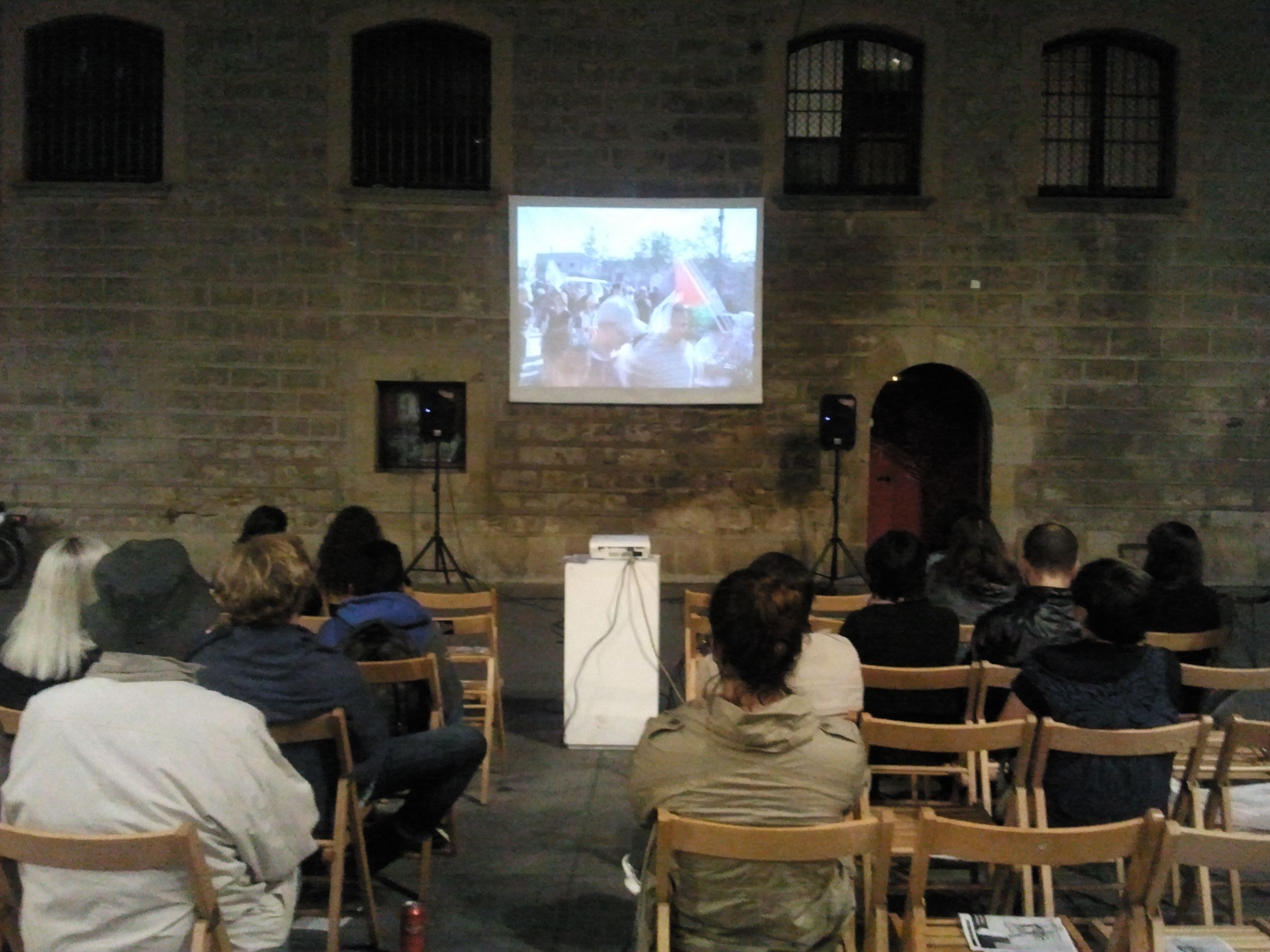 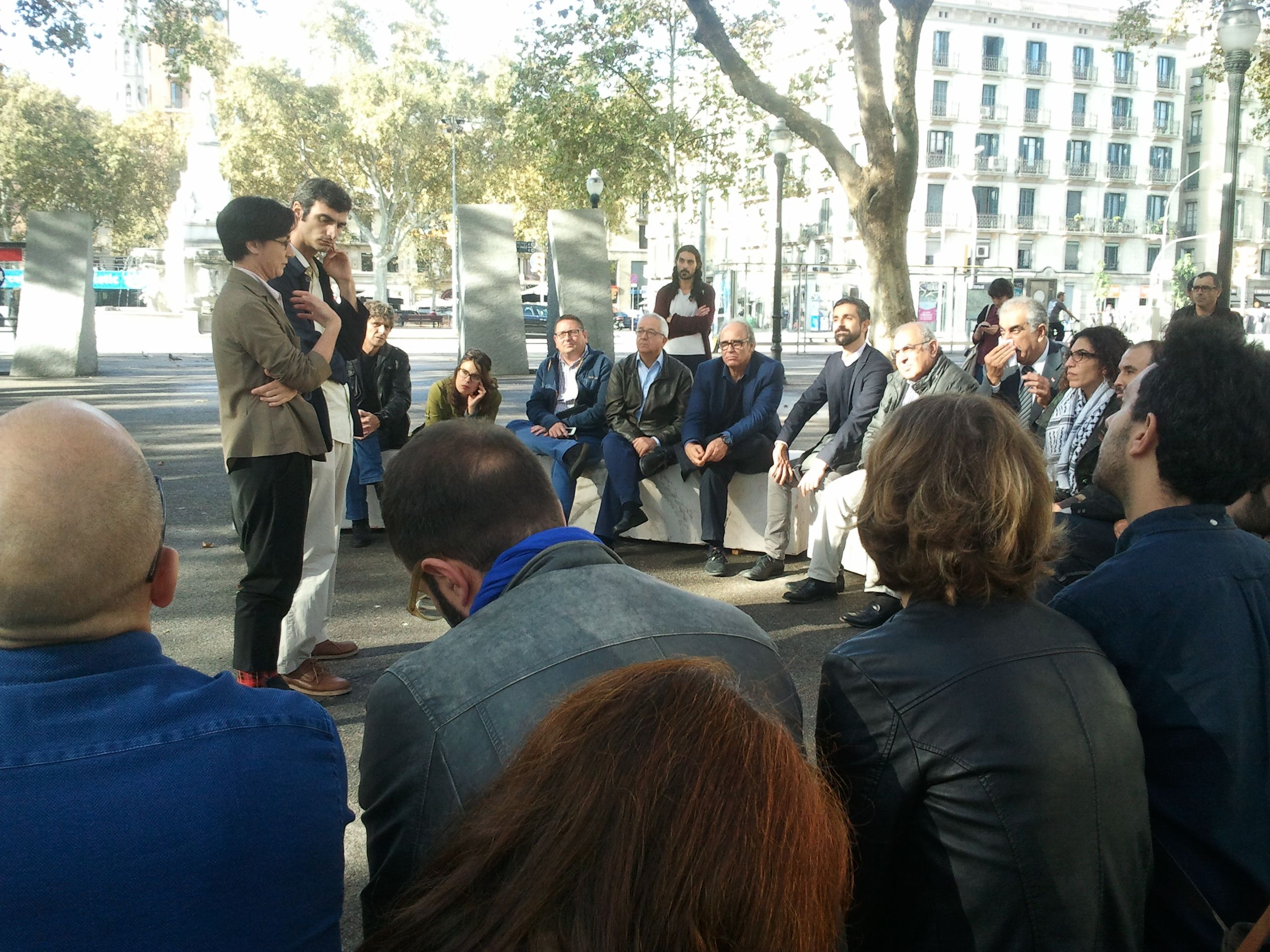 The call for ideas and projects as Microinterventions in public space, in the neighborhoods of Raval and Gothic  (Barcelona) under the TRANSLOCATIONS project, is a collaboration between Idensitat and Arts Santa Monica.