Description:
Roig 21 is a property which has been collectivised and managed under a dereliction notice in the Raval district, and an initiative of the Oficina de l'Habitatge (Office of Housing) promoted by CIC. The basic idea was to lease an entire building in which the neighbours would organise as an assembly to manage the space, sharing resources and enjoying mutual support.
In March 2011 the ROIG21 began as a collective project, agreeing with the owner a basic rent for the building, which was then awaiting auction, to accommodate families paying social rents. Despite the bank, which was previously involved in sequestering the building, mounting an appeal against the process, the judge ruled that the rents were valid.
Roig21 also acts as a space for information on housing, for workshops and lectures, and as a meeting place for the neighbourhood. 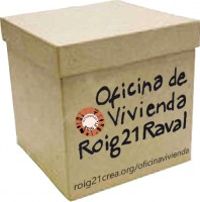