TRANSVERSAL AESTHETICS | PERIPHERAL ECOSYSTEMS
IDENSITAT and CENTRO DE ARTE CONTEMPORÁNEO DE HUARTE offer a residency to an artist or group of artists to develop a project within the social context of the towns of Huarte, Burlada and Villava (Navarra). The residency, which lasts one month, will run from September to October 2017.

INTRODUCTION
Transversal Aesthetics is a platform for experimentation with art, education and social space. A place of confluence between artistic practices as a space for critical research; educational activities as a space for the production of content, interaction and transfer of learning; and the urban context as a space of relationship between specific themes of work and a specific active social space surrounding it. A platform in medium-sized urban spaces, as generators of social, cultural and environmental spaces at the boundaries between rural and urban. The project is based upon the cross-disciplinary dimension of art in order to bring experiences together with activities, which impact upon singular elements based on common themes and strategies shared among various participating agents and bodies.
Peripheral Ecosystems is the common theme of a suite of proposed activities, tending towards work based upon environment-related art, which IDENSITAT and Centro de Arte Contemporáneo de Huarte will deploy, by initiating a project among the three adjoining towns of Huarte, Burlada and Villava (Navarra), with a combined population of approximately 35,000 inhabitants, which maintain an historical connection in fields such as education, sports or popular culture. The proposed theme is the relationship between the cultural and environmental ecosystem, based upon a re-evaluation of the peripheral position. The peripheral, here, is understood as a space of divergent thought, an opportunity to try out proposals far beyond the received norm, at a distance from self-proclaimed centrality, and also from antagonism towards its pejorative connotation.

THE RELATIONSHIP BETWEEN THE ARTIST AND THE TERRITORIAL NODE
The work carried out as part of Transversal Aesthetics will follow two common strands: the participation of an artist or collective, and the configuration of a territorial node involving various regional agents and associations. These two axes may cross over, work in unison, or coexist in parallel. The proposal submitted to the open call must take this element into account, and must be structured accordingly. The projects generated by the territorial nodes will be elements of interaction, activation and / or complement to the project proposed by the artist or invited group. They will be shaped by incorporating different regional agents and associations, who will deploy concrete processes and actions, and who will be organised through coordinated sessions, which will shape measures of intermediation and educational activity.

WORK CONTEXT
The town of Huarte, where the Huarte Centre is located, stands next to the towns of Burlada and Villava on the outskirts of Pamplona. The three localities follow the course of the river Arga, which has generated historical and cultural links among them. In recent years, the boundaries between rural and urban areas in these towns have been modified, due to urban and population growth, the conversion of gardens/allotments into leisure spaces, and changes in leisure habits, among other reasons. The focus of interest of the project to be developed is the study of this area's cultural / environmental ecosystem. The territorial node will be activated through local social groups linked to feminism and environmentalism. The selected project will develop its work based upon this context. 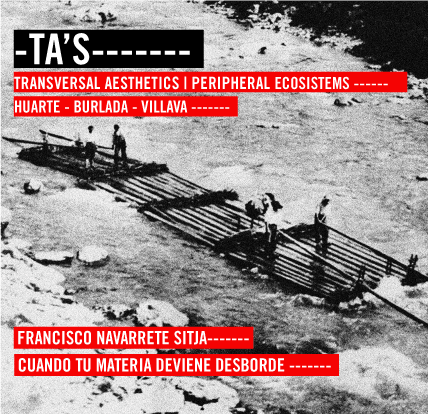 "Cuando tu materia deviene desborde" is the artistic project by Francisco Navarrete Sitja which has been chosen in the Estéticas Transversales | Ecosistemas Periféricos open call, promoted by IDENSITAT and CENTRO DE ARTE CONTEMPORÁNEO HUARTE, to run from September 11th and October 15th 2017.

Project overview
The project will attempt to generate a speculative and critical dialogue about the Arga river, using the notion of breaking the river-bank and social imaginaries and life experience linked to the force of water; imaginaries belonging to the localities of Huarte, Barlada and Villava (Navarre). Thus, through the artistic search for new systems of relationship between representative and divergent elements of the territorial context, the project "When your material spills over" will attempt to encourage branching from the topographical narratives, bifurcations which – sensitively – promote new ways of considering the power of a hybrid environment, materialities and means of shared living. For these purposes, the project will begin a dialogue between the subjective connections which may be established through associations between visual and formal aspects of the river Arga, the notion of overflow from an ecofeminist perspective, as well as explorations of popular imaginaries, cultural references, and life experiences associated with the strength of flowing water, and the overflow of water in these three localities. It will also work to promote new ways of imagining and experiencing the power of an environment of maximum complexity, local materialities, surfaces, and shared ways of living. In relation to the above, the work which will be created and produced collectively will be a graphic piece which establishes a dialogue between those speculative and symbolic relationships under consideration, allowing for the exploration of other possibilities regarding the circulation of images, non-conventional exhibition formats, the production of  visual narratives, as well as facilitating access to new audiences based upon collaborative creation and contextual artistic practices.

ACTIVITIES
From the 9th until the 14th October 2017.
Hikes, mapmaking, drawing, collage, taking photographs and ambient sounds, and interventions of visual and literary materials, in a week of activities which epxlore our relationship to water and its various manifestations. Activities with Francisco Navarrete Sitja (visual artist) and Franco Castignani (poet and writer).

Aperitifak: Collective hike, presentation and aperitif.
Saturday 14th October, from 11.30 am until 2.30 pm
Place: Molino de San Andrés (Villava)/ Centro Huarte (Huarte) (11.30 am departure from Molino de San Andrés – 12.30 pm Project presentation and aperitif)
Final activity of the artistic residence Cuando tu materia deviene desborde, recompiling visual memory. The project will be presented, and there will also be a celebration aperitif for sharing. Attendees will be invited to to bring and share family albums, photographs, paintings, drawings, archives, objects, memories, anecdotes, and other things associated with the Arga and Ultzama rivers.

"Cuando tu materia deviene desborde” (When Your Material Spills Over) is a project by Francisco Navarrete Sitja as part of TRANSVERSAL AESTHETICS – PERIPHERAL ECOSYSTEMS, promoted by Idensitat and Centro Huarte.

All activities are free of charge.

Francisco Navarrete Sitja. Visual Artist.
Francisco Navarrete Sitja (1986, Chile), has a degree in Fine Arts and a master's degree in Visual Arts from the University of Chile. At present, he has a grant from the  Museo de Arte Contemporáneo de Barcelona MACBA, to take a course in the Independent Studies Programme (PEI) between 2017 a 2018, and is a resident in the Artistic Residencies Programme at HANGAR (Barcelona, España). He works between Santiago de Chile and Barcelona.
More information: www.francisconavarretesitja.com

PHASE II. From 29th January 2018 to 2nd February 2018
The second phase of the residency will consist of a new cycle of workshops and a presentation day, with the involvement of the schools "Hilaron Eslava" in Burlada, "Verge Blanca" in Huarte and "Lorenzo Goikoa" in Villava, a collaboration with the participants of the "Municipal Painting and Drawing Workshop" at the Casa de la Cultura in Huarte, "Burlada's Painting, Drawing and Engraving Workshop" and "Zubiarte Engraving Workshop", in Huarte. The processes and material referrals will be presented at the Batán de Villava, on February 3rd at 12 pm, and on February 4th during the day.

In this second phase, the dynamics and workshops to be carried out will be geared towards highlighting the collaborative meeting and task distribution practices of "Auzolan"; the work which is disinterestedly realised in favour of the community, and which becomes a natural meeting place among peers, as well as transmitting and working based upon the experiences, stories and materials collected and / or contributed in the first phase of the residency. Thus, a dialogue among these elements will be established as drivers which allow us to emerge from the danger of self-referentiality, producing common elements, as well as stimulating collaborative processes and the imagination based on the development of different aesthetic practices, together with students from the schools, and members of the participating workshops.
The first workshop will be based on drawing and cartographic practice, taking as a starting point the images, stories and locations represented in the archives provided by the Archive of the Town Council of Villava; the archives provided by Miguel Ángel Martínez Lizar, one of the residents affected by floods in the Martiket community; and the photographs by Zacaries Ecay – builder and self-taught photographer from Villava -- which were provided by the Tomás Brothers and Lourdes Donazar, who treasure this family photo collection.

The second workshop will be based on visual poetry through acrostics and calligrams, taking as a starting point pictorial representations of residents participating in the "Municipal Painting and Drawing Workshop" in Burlada and Huarte; one of the stories about Olleria de Villava -- written by Cipriano Erro, a resident and a travelling salesman from Villava -- and some fragments of lyrical and narrative literary texts produced by local residents in the "Artistic Recomposition Laboratory", and developed by the writer Franco Castignani, during the first stage of the residency.

The third workshop will work with collage, engraving and mounting techniques, taking as starting point the artistic practices developed by artist Àngela Moreno (Huarte), from the collection of various natural elements and materials from the environment, and its later intervention to compose possible affective relationships. In addition, the workshop will use artisan-produced paper made in Batán de Villava; the awareness-raising centre at the River Park serving the Arga and Ultzama rivers.
And finally, the fourth workshop, based on a joint performance action, will take as its starting point the artistic practices of two members of the ManifiestAtaldea group – Belén Pomes and Maria Jóse Sánchez-- who during the month of January 2018 are presenting an exhibition regarding four perspectives onwater, at Batán d'Atarrabia. The activity to be carried out will be developed by creating a dialogue between collaborative practices, mythological and naturalist stories of the Basque culture around water, and the maintenance of the material bases that support life.

BACKGROUND
Transversal Aesthetics is considered as a "hive" of projects connected to medium-sized towns, as well as to cultural venues related to them. In 2017, three other projects are being carried out in the cities of Manresa, Mataró and Vilanova i la Geltrú in Barcelona, under the common theme of how each city relates to the transformation of work spaces. Transversal Aesthetics collaborates with Museu Comarcal de Manresa, MAC Mataró Art Contemporani and Centre d'Art Contemporani La Sala (Vilanova i la Geltrú).
Transversal Aesthetics is conceived as a networked space for experimentation, to initiate creative projects with the involvement of artists, educators and other social and cultural agents active in their regional contexts. It is a framework for testing out new methods which may impact upon the development of educational activities and measures of mediation adapted to specific local contexts. Through sharing subject-matter, and by tracing out a variety of interpretations of a chosen location, a multifaceted vision of repeated phenomena in certain localities may be delineated.

TRANSVERSAL AESTHETICS - PERIPHERAL ECOSYSTEMS is possible thanks to the co-production of IDENSITAT and Centro de Arte Contemporáneo de Huarte, with the collaboration of Ayuntamiento de Villava and Generalitat de Catalunya. Departament de Cultura.