the project "nārang: genealogia de un souvenir / nārang: genealogy of a souvenir" tackles an analysis of the souvenir as an exotic object from the valencian region, in this case castellón, which overlaps the spheres of commerce, the tourist industry and leisure culture. the construction of the exotic originated in colonial europe as a commercial standard, and as a measure of the imaginary which expressed the interaction between international politics, economies, migrations, and the perception of the self and of otherness.
nowadays it remains a standard pertaining to economic relationships between the global north and south. specifically, the tourist-traffic within the european territory causes numerous northern european consumers to be directed towards the valencian community. at the same time, the orange harvest attracts workers from the african and latin american diasporas to this context. now oranges are beginning to appear emblazoned on socks available for sale in souvenir shops, and crowdfarming projects are proliferating, in which orange trees may be adopted by subscribers from anywhere in the world. in the construction of this imaginary of sun, tradition, health and celebration, those who produce it remain hidden.
whose hands do the cultivating and harvesting? which are the cultivated territories? what is the origin of this plant? genealogy of a souvenir, using a toolbox of decolonial instruments, allows us to analyse the current dynamics of the construction of the exotic. we propose a post-exotic method, visualising and telling the story of the origins of these tourist attractions, breaking from consumerist stereotypes, and offering other imaginaries. on the one hand, various mapping and research activities will be initiated regarding this fruit-crop, while on the other hand, we will generate various audiovisual production activities, and an artistic reinterpretation of orange-related souvenirs.

The residence has raised the following actions linked to the project:

BETWEEN ORANGE-TREES AND TIGERNUTS: TERRITORIAL CONNECTIONS
Wednesday February 13th, 6 pm, Auditorium Museum of Fine Arts in Castellón
Av. dels Germans Bou, 28, 12003 Castelló de la Plana
Screening of the documentary Tigernut: the motherland of women of integrity, about the production and marketing of African tigernut. With the presence of Llanos Rodríguez, president of CIM Burkina, and a presentation of the report Alerta taronja. Collir i triar quan la irregularitat esdevè norma, from La Directa, about the exploitation of labour in the collection and marketing of oranges. With the presence of co-author, Ester Fayos.

TRANSLATING RESULTS
Thursday March 14th, 6 pm, cloister of the Museum of Fine Arts in Castellón
Av. dels Germans Bou, 28, 12003 Castelló de la Plana
Open activity
The publication includes research on genealogy, identity, representation, culture, labor exploitation, export, exotic, crisis and souvenir effect of oranges.
The publication is a sharing of the collective and creative process developed during the residency and gathers the testimonies of the people who have participated and collaborated, the semiotic analyzes of the imaginaries of advertising and the graphic translations that have arisen from the spontaneous contributions of the guests.
This publication wants to show the different approaches and the different narrations that can be built around the orange. These stories and essays give space to reflections on identity and how its construction is determined through the relationship between the local and the otherness. 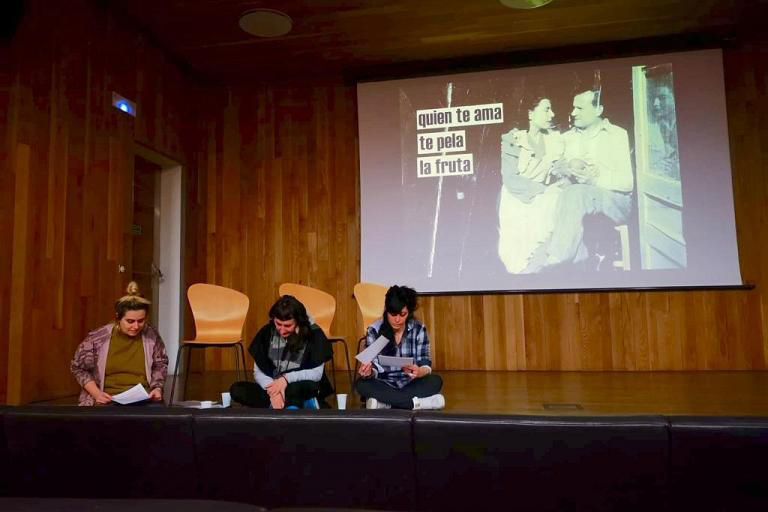 * “we reclaim space from capital letters, and submit the entire construction of the story to lower case letters, as a sign of a possible minority transformation, starting with the aesthetics of the phrase” .

EDUCATIONAL ACTIVITIES
The Educational Activities is a part of the project ECOSYSTEMS OF LEISURE, and the results will be presented along with the rest of the activities proposed by the project. They will take place between September 2018 and May 2019, based upon a series of collaborations with different fields of university education and research.

In Castellón, the project will work in collaboration with the Degree in Videogame Design, Universitat Jaume I, with the working in the subject areas of Programming, Narrative and Videogame Design, and with the lecturers who teach them: Antonio Morales, Begoña Martinez (both lecturers in Software Engineering), Emilio Saez (lecturer in Conceptual Design) and Diego Diaz (lecturer in the Art of the Video Game). The video game designed within the theme of the project will be based upon the concept of Leisure, and students enrolled in the three subjects will realise a single final project called DAI (project in Design, Art and Engineering), creating a video game among the three subject-areas in parallel.

IN THE NIGHTY JUNGLE: Virtualises the social reality of getting lost in a disco.
Two friends are in a disco, and face several obstacles in order to meet each other and leave the bar, among them the constant nocturnal siege to which other characters in the disco subject them, called "Ear Eaters", "Dancers" or "Babblers" in the game. Developed by Álvaro Martínez Soto, Pau Fenollosa and Ángeles, Francisco Blasco Gozálvez, Francisco Rivero Cabezas, María del Olmo Marco, Marc López Gramaje.

MORE THAN WORDS
A video game set within a book, in which, in his leisure time, the protagonist submerges himself, confronting reality and fiction, and revealing that when a story becomes engrossing, the border between the two becomes blurred. Developed by: Álvaro García Lozano, Francisco Miguel Morales Sánchez, Rubén García Salas, Alejandro Cercós Pérez, Hoang Nam Le and Àlex Beltran Bellés.

LIESURE
Video game centred upon a Hotel, following the everyday work of a bellboy who must carry cases, deal with an incoming crowd of tourists, and essentially work in an environment full of ephemeral characters. The authors are playing on words with the title, which makes reference to the lie of the free time industry. Developed by César Díaz Delgado, Francesc Xavier Perona Cascant, Jordi Llobregat Vidal, Jorge Fernández Sánchez, Olga Montero Rodríguez, Alex Monzó Machirant

PROJECT SOUND X
Players take on the role of a university student with agoraphobia, whose only way out of his safe space, to escape from the world surrounding him, is through music. After finishing his gruelling routine, our protagonist leaves the university, ready to enjoy a spell of walking and listening to music, though responsibilities endanger his time of relaxation. On a journey through leisure and how we understand it, the gamer must help him overcome the obstacles which surround him by changing the music.
Developed by Ramón Iglesias Granados, Sara Montagud Rodríguez, Sergio Moya Larios, Adrian Peris Hernández, Sergi Rodas Renau, Andreu Llorens Angulo.

ANTICLICK, THE GAME
The game deals with the everyday existence of a young working-class man overwhelmed by the complexity of social relationships, bills, and wage uncertainty. Throughout his day pressure builds on him, which he ends up releasing by playing video games. While playing a simple retro game, he realises that the same things, under different names, are happening to the main character, and that he must struggle with the videogame's problems in the same way as the character must struggle with everyday things. Developed by: Alejandro Estabén Aicart, Aythami Godoy Rodríguez, Natxo Sirvent Méndez, Sabina Parlatore and Pablo Lorente.

MY GREAT NIGHT
There are many factors to life that require a lot of effort and dedication, whether these are related to work, to studies, or any other aspect of life. For all the time that we might wish to devote to these areas, sometimes we must stop and take time to devote ourselves to other things and clear the mind, time which we call leisure time. But what about those who work when others are resting or having fun? My Great Night considers workers in the leisure industries, those people we need so that others can enjoy their free time.
Developed by Miguel Blanco Guaita, Iváb Monreal Gil, Adrián Bautista Gil, Jesús Moreno Córcoles, Miguel Fernandez-Montañes Dominguez, Lucía Zorzano Santamaría.

GET HIGH AND DIE
A 2D platform video game related to the subject of leisure, and created as a criticism of the overconsumption of drugs at parties, and in leisure in general. Tom is a mediocre worker living in Balconera. He must perform the same boring tasks every day of the week, so that once the weekend comes, he goes wild. Once he enters the world of the party, Tom wildly abuses drugs, and must return home before he does something he might regret ...
Developed by Arthur Knegtel, Guillem Ortega Fernández, Iván Gil Solsona, Nahuel Espeche Alcanyís, Guillem Marrades Torres, and Sergio Montellano Cuartero.

KIDOO'S ADVENTURE
Kiddo is a small child of about 8 years old who, like any other child, enjoys his free time going to the park, playing ball, and drawing, among other things. One day he loses his favourite ball. At this moment, his great adventure to recover the ball begins. Kiddo is a platform and adventure video game in which the player explores leisure and free time from an ordinary child's point of view, experiencing situations in his everday life, and attempting to escape reality by creating fantastic worlds out of what he knows, for example, the school, the park, and other familiar environs. Developed by Amparo Villar Villalba, Pau Borrell Egea, Esteban Gallego Ramos, Fernando Soria Mascarós.

THE ADVENTURES OF OSMETRIDA AND THAT GUY
Steve is an ordinary teenaged fan of video games and pop culture. One day he finds a box and when he opens it, he releases an entity which feeds on popular books, music, movies, etc.. Osmetrida, his eternal rival, and Steve must endure that all of this culture is not lost. Developed by Jon Hodei Martínez Soto, Juan Luis Moreno Escolástico, Joan Dalmau Alacreu, Ivan Gomis Moreno, Jorge Sánchez Torralba, and Jorge Nieto Morales.

Final presentation of the Videogames in University Jaume I.
January 29th, EspaiTec.

Master’s Degree course in Psychopedagogy, University Jaume I.
The concept of Leisure will be approached from an educational point of view, thanks to a collaboration with the Master's Degree corse in Psychopedagogy. The lecturers involved are Joan A. Traver Martí, and Maria Auxiliadora Sales, coordinator of the Master’s Degree. They will approach the subject of leisure from a public space perspective, working outside the classroom in non-formal spaces, in urban territories, neighbourhoods and cultural centres, considering the figure of the educational psychologist as an agitator and a facilitator in educational issues. The Master’s degree course has already started a strand of work of psycho-pedagogical intervention based upon art, with the intention to consolidate this line of work with collaborations such as this one, with Ecosistemas del Ocio.

Workshop Genealogía de un encuentro
4th, 5th, 6th, 7th February 2019
By the Saperi Situati Laboratory (ideadeastroyingmuros + Rosanna Cima + Maria Livia Alga + Sandra Faith Erhabor)
As part of the "Narang; genealogy of a souvenir" project, the workshops on post-exotic methodology will be taken by the "Saperi Situati Laboratory" together with the Jaume I University‘s Psycho-pedagogy course, master's degree level, at Castellón. - February 4th  am: Rosanna Cima introduces the genogram as a tool, its history and theoretical sources. - February 5th 11 am: Maria Livia Alga talks about the relationship between research and life, the post-exotic, the methodological approach of her proposals, and explains some anthropological questions. - February 6th 11 am: Sandra Faith Erhabor talks about the intercultural centre at the Casa di Ramia (Verona), and about writing as a tool. She will read (and translate into Spanish) poems from her book "I will never stop writing: poems." - February 6th 11 am: ideadestroyingmuros organise a workshop to study the concepts developed in the previous days through collage and graphic representation of the orange